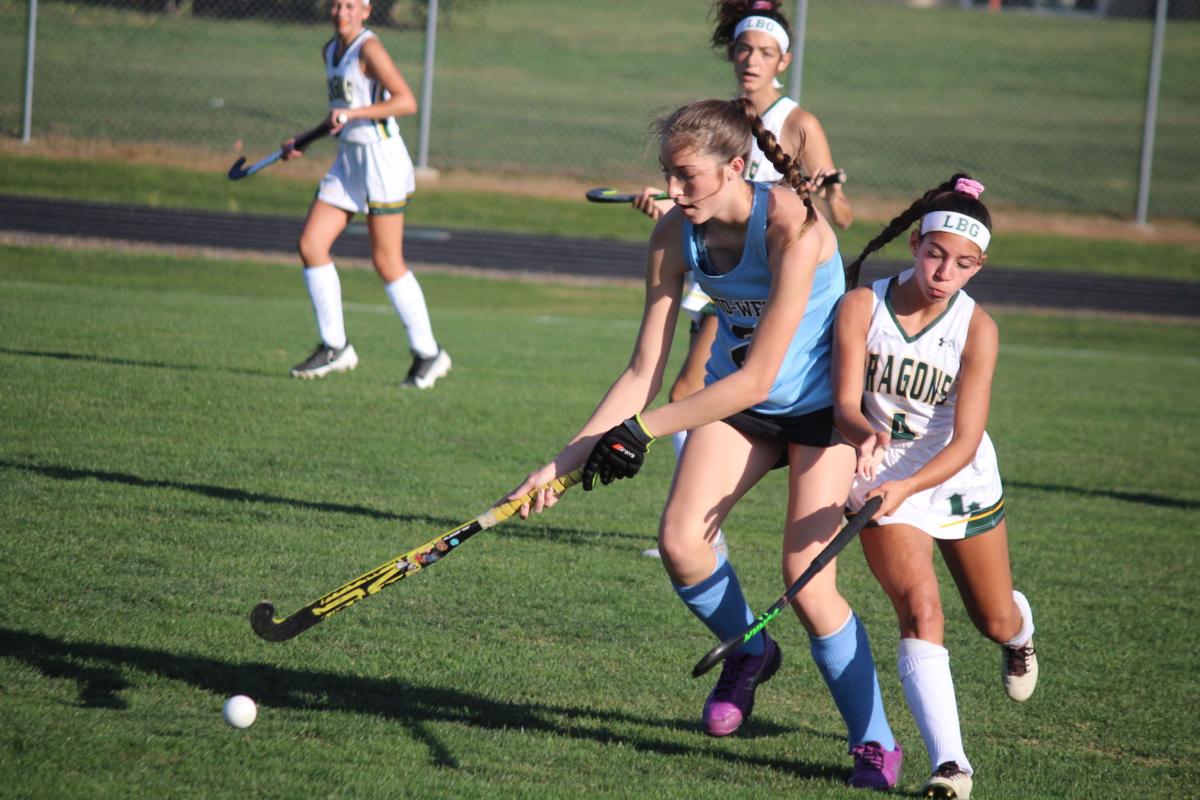 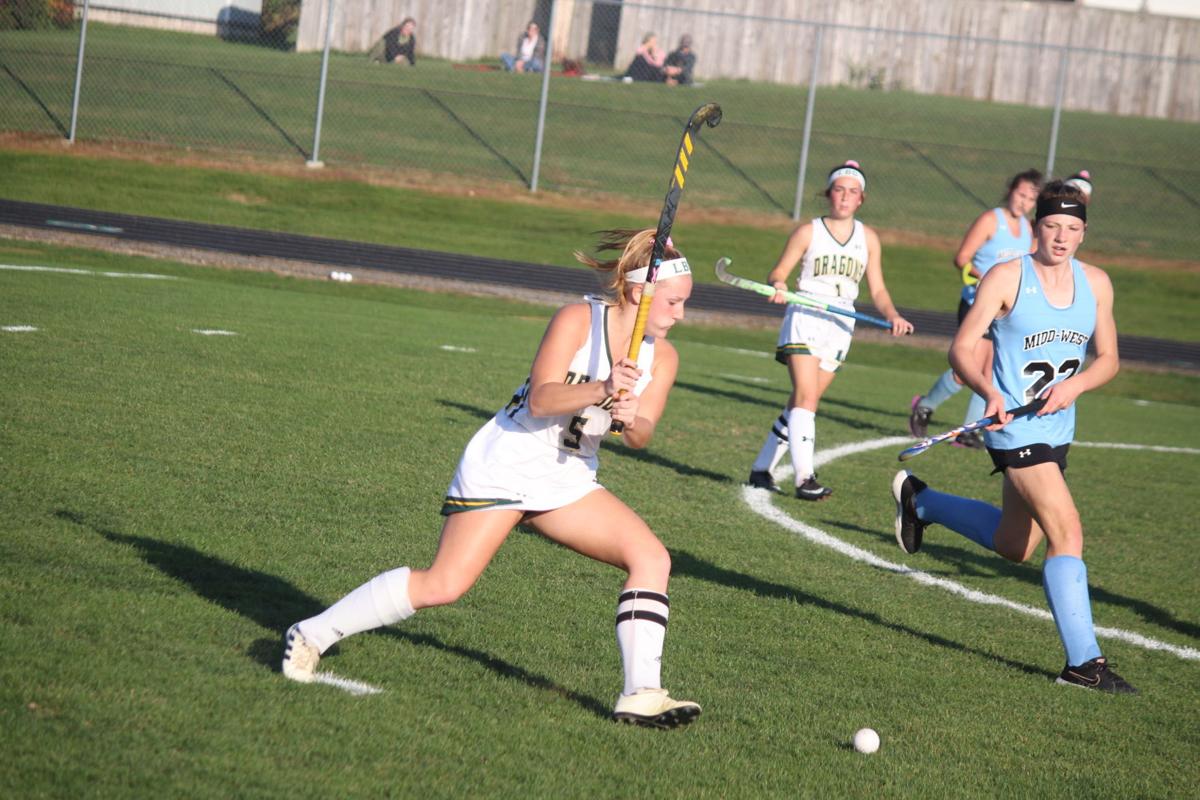 Lewisburg’s Rylee Dyroff prepares to hit the ball into Midd-West’s circle for a shot opportunity during second-half play of Thursday’s contest, won 3-0 by the Green Dragons. 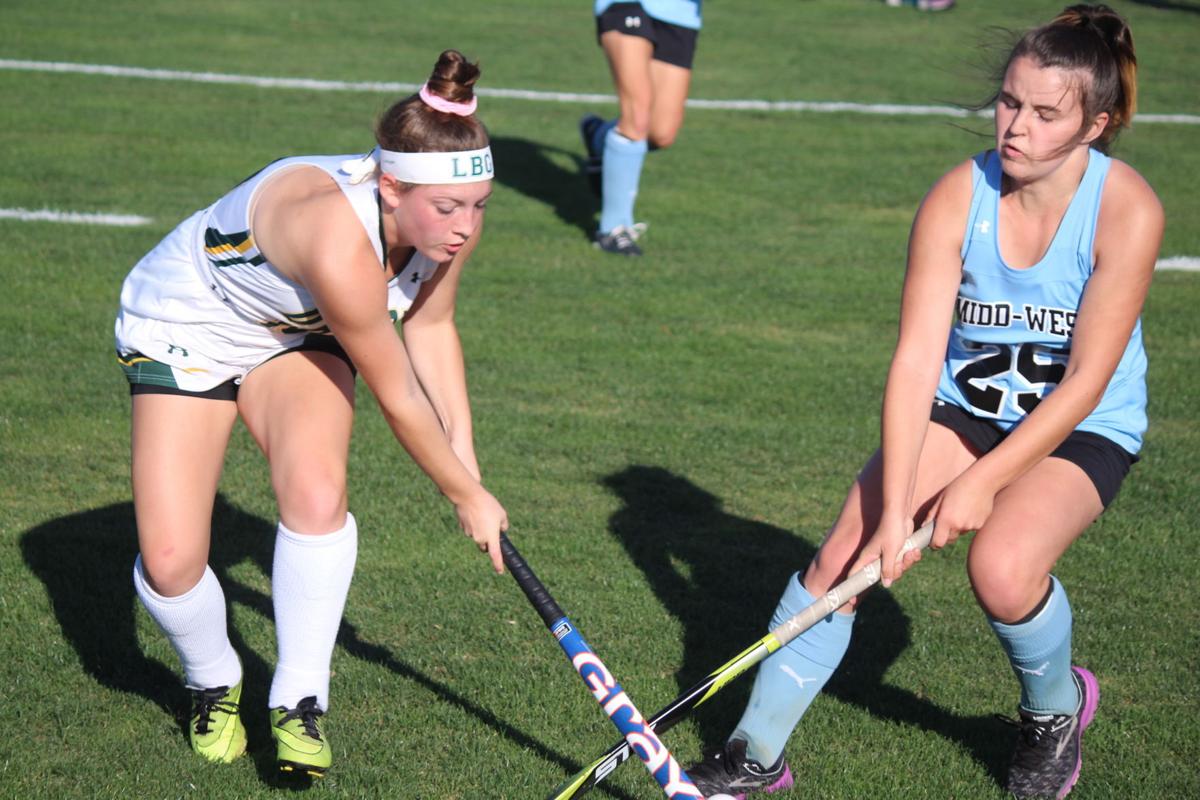 Lewisburg’s Whitney Berge fights for a loose ball with Midd-West’s Alexa Griffith in the first half of Thursday’s HAC-II contest at the Pawling Sports Complex.

Lewisburg’s Rylee Dyroff prepares to hit the ball into Midd-West’s circle for a shot opportunity during second-half play of Thursday’s contest, won 3-0 by the Green Dragons.

Lewisburg’s Whitney Berge fights for a loose ball with Midd-West’s Alexa Griffith in the first half of Thursday’s HAC-II contest at the Pawling Sports Complex.

LEWISBURG — Following two goals that were waved off and another scoring chance that nearly resulted in a goal, it was only a matter of time before Lewisburg’s field hockey team actually put one into the cage during Thursday’s conference matchup against Midd-West.

The Green Dragons would finally get a ball past Mustangs goalkeeper Paris Seibel late in the second quarter, and it preceded two more goals as Lewisburg took a 3-0 victory at the Pawling Sports Complex.

Kara Koch and Rylee Dyroff both had a goal and an assist to key the victory for Lewisburg (9-1, 6-1 HAC-II).

“We came in ready to play, but when we actually got on the field it took us a while to get there,” said Lewisburg coach Daneen Zaleski. “So, we needed this win. It’s a conference game and I believe we’re tied with Bloomsburg for the conference lead, and every conference game is important (from here on out).”

After those two failed opportunities to score in the first quarter, Lewisburg nearly got one in early in the second quarter on a shot by Olivia Barrlett. The ball seemed to cross the goal line, but a Midd-West defender got a stick on it to keep it all the way out.

None of that mattered later in the period when Koch scored off a Dyroff assist to give the Green Dragons a 1-0 lead with 4:23 left before the half.

“That felt good. I didn’t know they were going to get a goal, but I felt that our game play and the pressure that we were putting on Midd-West that one had to pop in at some point,” said Zaleski. “It took longer than I really wanted it to (to score), but then we got two in the second quarter.”

Dyroff really made that first goal happen for the Green Dragons.

First, Dyroff chased down a long pass and kept it from going out of bounds, then she had to elude a Midd-West defender before she could fire the ball into the circle to a waiting Koch.

Less than three minutes later Whitney Berge scored off a Barlett assist to give Lewisburg some extra cushion and a 2-0 lead at the break.

Midd-West (7-6, 3-4) nearly got a goal off its first penalty corner of the game with less than 5:30 to play, but Lewisburg goalkeeper Kerstin Koons managed to clear the ball away to keep it a two-goal game.

The missed opportunity by the Mustangs no doubt caused Zaleski and other members of her team to collectively hold their breath for a split second.

“Yeah, I said no corners and no shots (in the game), but that didn’t work out,” said Lewisburg’s coach. “It’s fine and it worked out. Kerstin played the ball and we got it out, and we made it through with a win.”

But with a win already in its grasp, Lewisburg was awarded a penalty corner just as time was expiring in the game.

The referee said to play on, and Dyroff would score off a pass from Koch to put the finishing touches on the game.

“Yeah, it was a really good way to end the game. We knew it would be a tough game coming in, and we knew Midd-West would be ready to play us because they always are,” said Dyroff. “Midd-West always gives us a good game so we knew we had to play them hard, and that goal just really sealed the deal for us.

“You need to finish the game how you want. If that goal didn’t go in we still would’ve won but it wouldn’t have felt as good, so it was definitely a good way to end,” added Dyroff.

Now winners of nine straight after losing their season opener, the Green Dragons will look to make it 10 wins in a row when they play at Selinsgrove at 11 a.m. Saturday.

And according to Zaleski, Thursday’s win should go a long way in helping Lewisburg in the remainder of the regular season.

“It should (help us),” she said. “We play Selinsgrove on Saturday, which should be a tough game, then we play Warrior Run and then close out with Mifflinburg. We’re still battling and trying to stay on top with our wins and keep moving forward (towards the playoffs).”