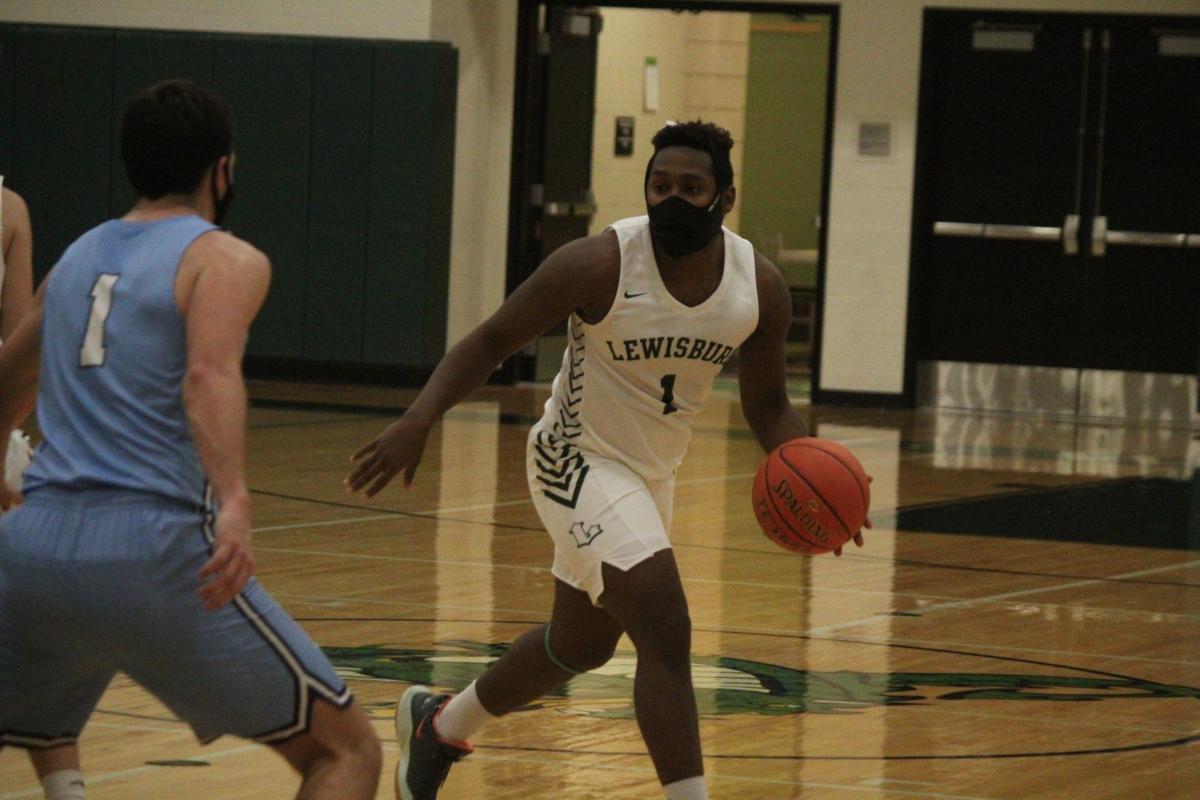 Lewisburg’s Dante Sims looks for open space as he sets up an offensive play for the Green Dragons in the first half of Tuesday’s nonleague game versus Millville. 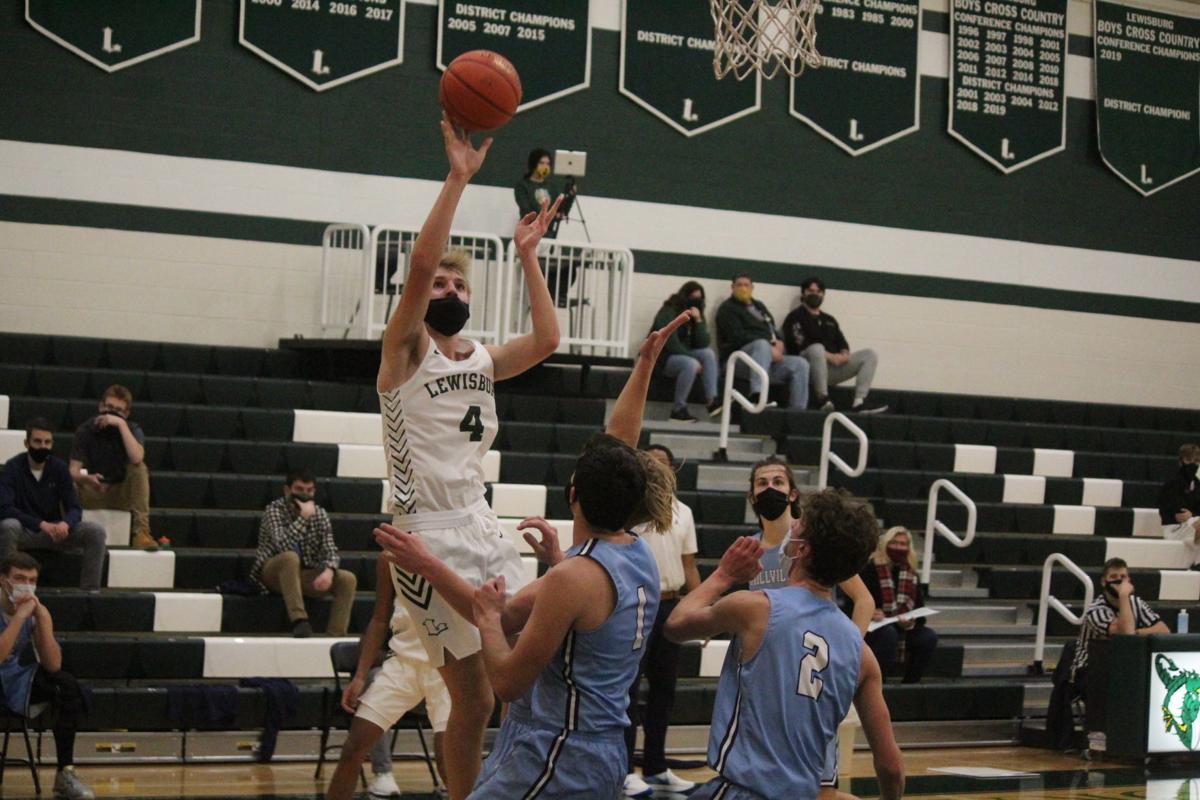 Lewisburg’s Joey Martin shoots a jump shot in the first half of Tuesday’s nonleague contest against Millville. Martin tallied a game-high 22 points in the win. 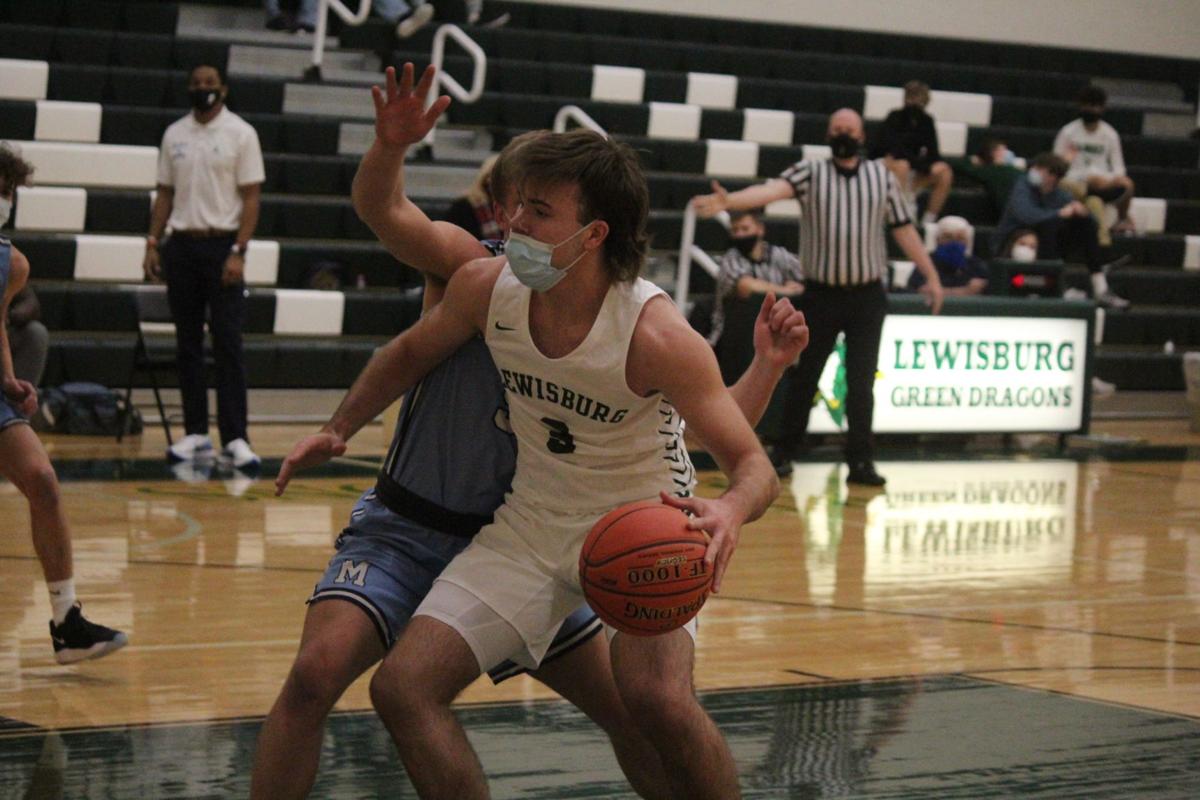 With a Millville defender all over him, Lewisburg’s Jacob Hernandez drives to the basket in the first half of Tuesday’s nonleague home game.

Lewisburg’s Dante Sims looks for open space as he sets up an offensive play for the Green Dragons in the first half of Tuesday’s nonleague game versus Millville.

Lewisburg’s Joey Martin shoots a jump shot in the first half of Tuesday’s nonleague contest against Millville. Martin tallied a game-high 22 points in the win.

With a Millville defender all over him, Lewisburg’s Jacob Hernandez drives to the basket in the first half of Tuesday’s nonleague home game.

LEWISBURG — A season ago, Joey Martin spent most of his time coming off the bench for Lewisburg’s boys basketball team.

Martin earned a spot in the starting lineup in 2020-21, and it’s beginning to pay off big time for the Green Dragons.

Now a junior forward, Martin tallied a game- and career-high 22 points Tuesday night to help lead Lewisburg to a 54-30 nonleague victory over Millville.

Lewisburg improves to 2-1 with the victory, while Millville moves to 1-1.

“It was a team effort out there,” said Martin, who tallied 13 points in a win Saturday over Lourdes Regional. “We moved the ball well and we got into our offensive plays, and we were just able to cut, get open and finish around the rim.”

Two buckets from Martin and two from Dante Sims helped get Lewisburg out to a 10-1 lead midway through the first period.

The Green Dragons would pull ahead by 10 (15-5) after the opening eight minutes of play. The Quakers rebounded in the second period to cut their deficit to eight at the half (26-18) despite the best efforts of Martin, who added eight points in the quarter.

The closeness of the game prompted Lewisburg coach Matt Salsman to challenge his players to play better during their time in the locker room.

“At halftime we sort of challenged our guys on a few things. I didn’t think we played our best in the first half — we just weren’t playing well offensively,” said Salsman. “Our passes were late, our cuts were late, we weren’t hitting bodies on screens, and at halftime we challenged them to make sure we were doing that and executing our sets.

“Defensively, we stopped letting them go to their strong hands, and I think in the second half we didn’t allow them to do that,” Salsman added. “We went on a run to start the third quarter and that made the second half a little bit easier for us.”

Lewisburg outscored Millville 13-0 to start the second half. The run was fueled by a 3-pointer and five total points from Forrest Zelechoski, and a couple of buckets from Martin.

“Joey is coming around. In the first game against Montoursville he definitely had some first-game varsity jitters, and getting off to a quick start against Lourdes in the first quarter on Saturday has really helped his confidence out a lot,” said Salsman. “Joey is very versatile. He can play the guard for us, he can play the four for us, and I think that allows him to get a lot of minutes. He’s a tough matchup for guys when he’s able to hit that perimeter jumper, because he’s good enough to get to the basket.”

Along with Martin, junior center Jake Hernandez added 13 points in the win for Lewisburg, nine of which came in the second half.

“A win like this will boost our confidence. Having confidence makes our shooting so much better,” said Martin. “We’ll go into practice (today), get those shots up and see the ball get through the rim and that will transfer over into (the next) game — where we can keep on making those shots.”

Lewisburg will look to make it three wins in a row when the Green Dragons host Selinsgrove in a HAC-I matchup at 7:30 p.m. Thursday.

Lewisburg 54, Millville 30at LewisburgScore by quarters