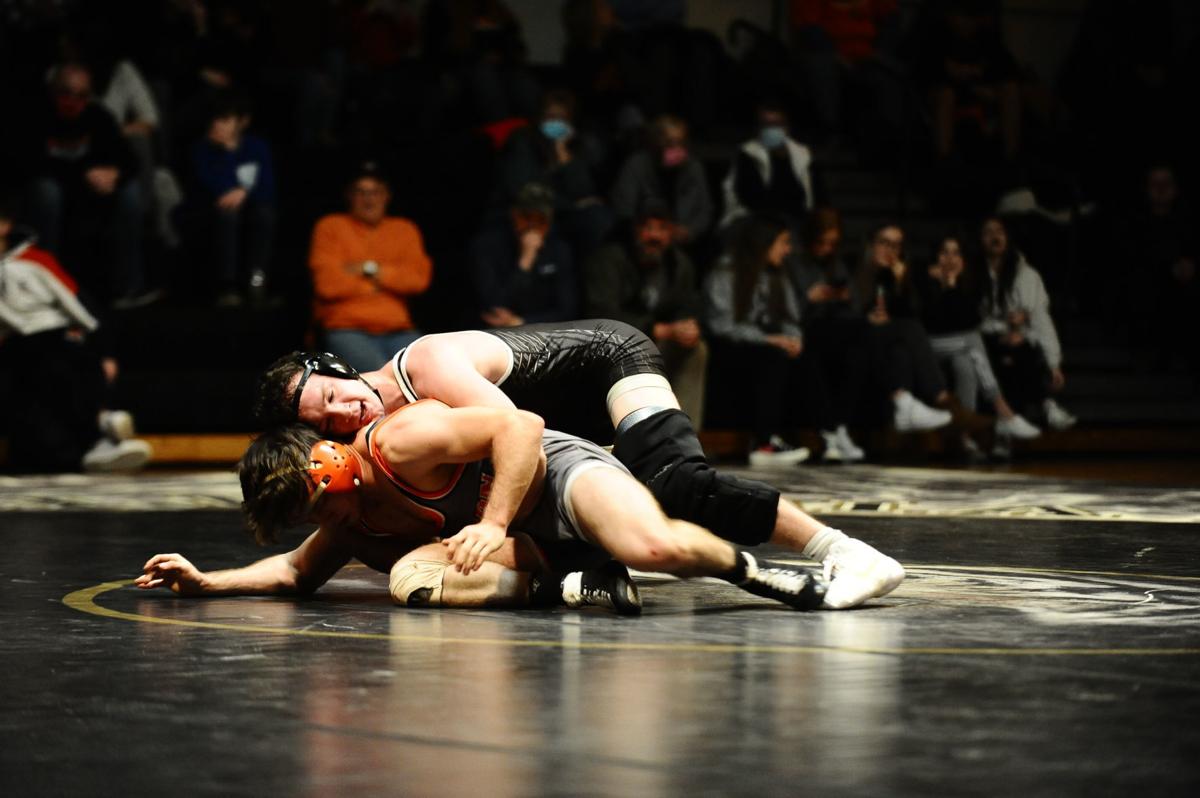 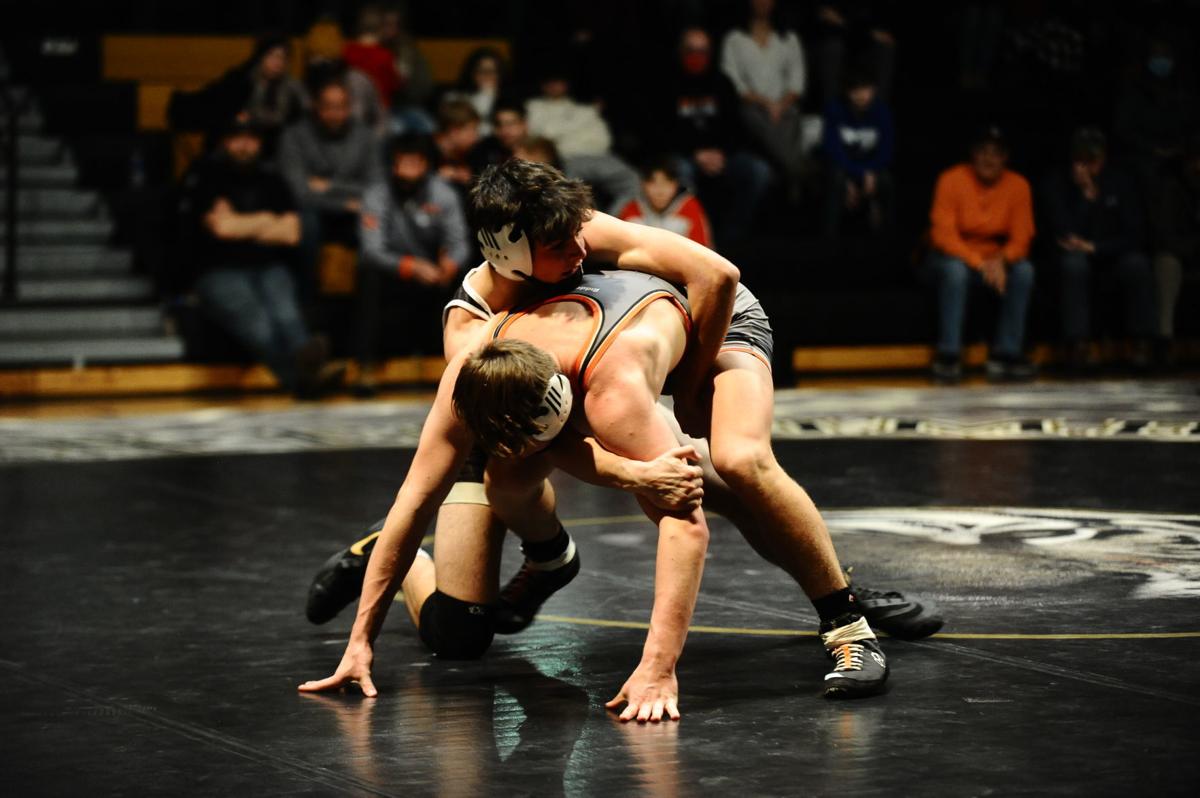 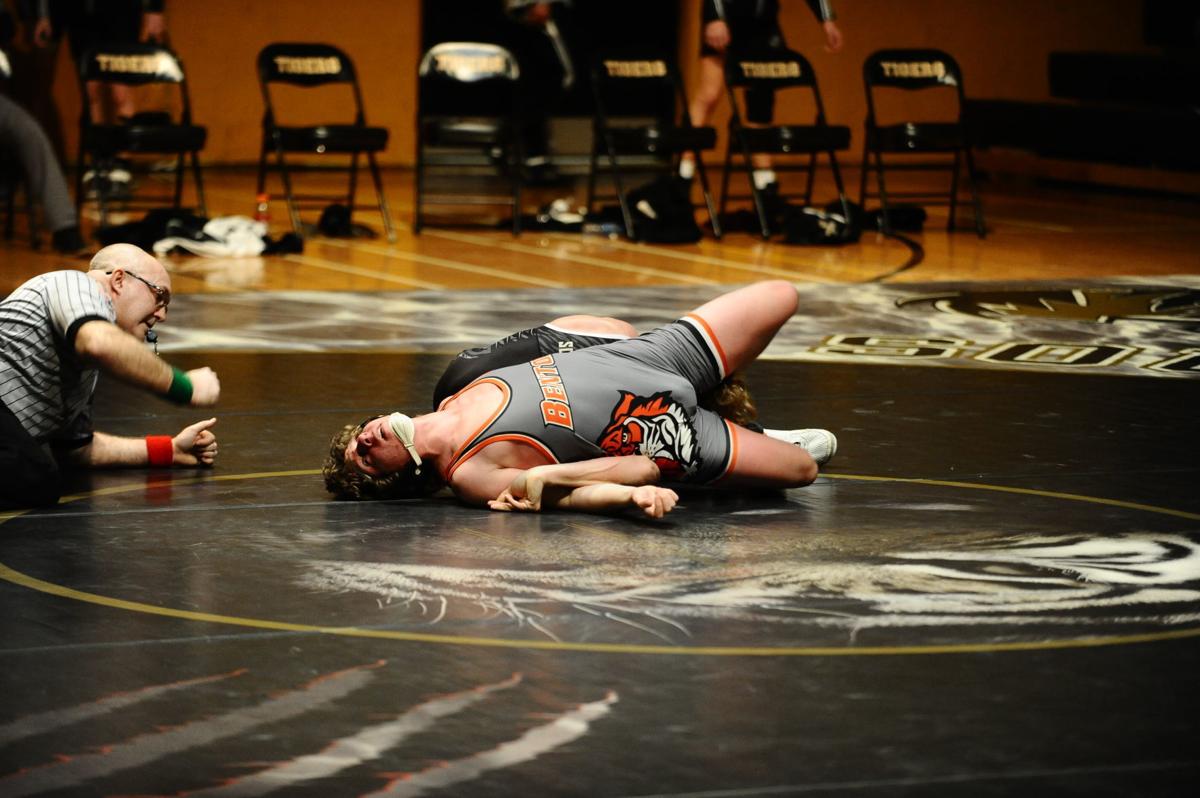 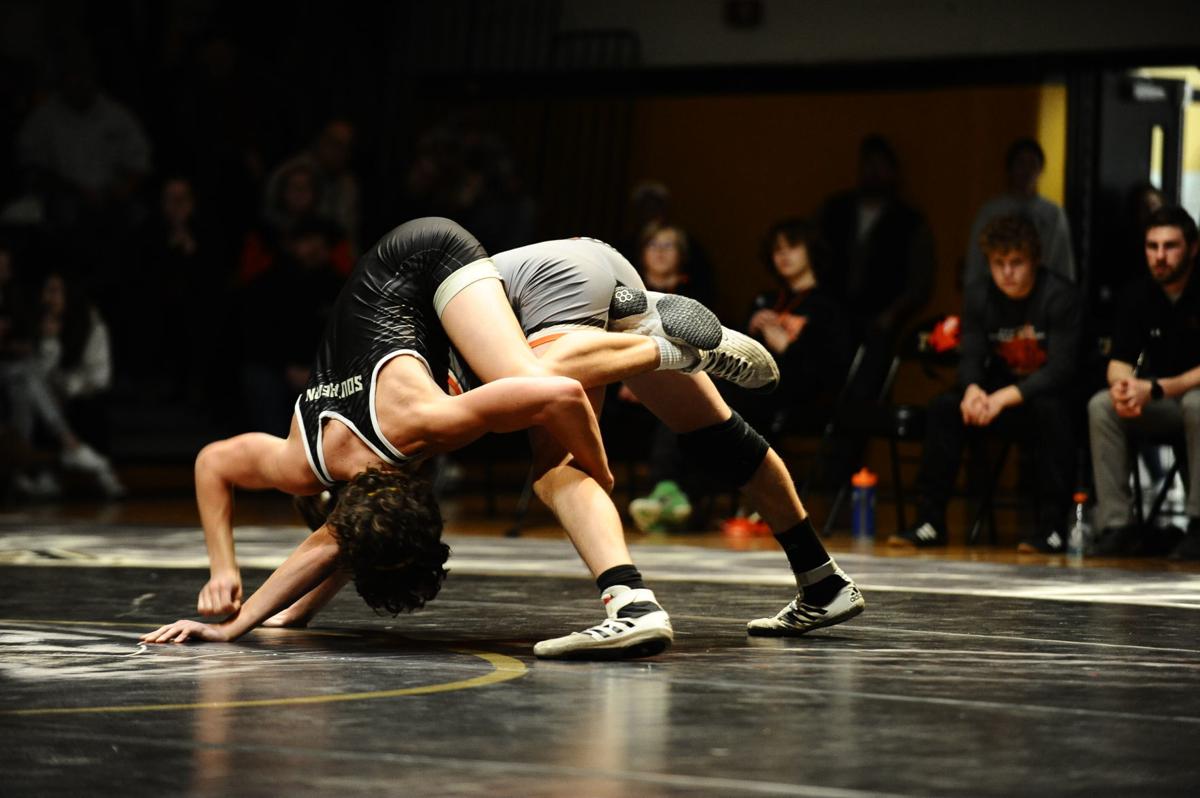 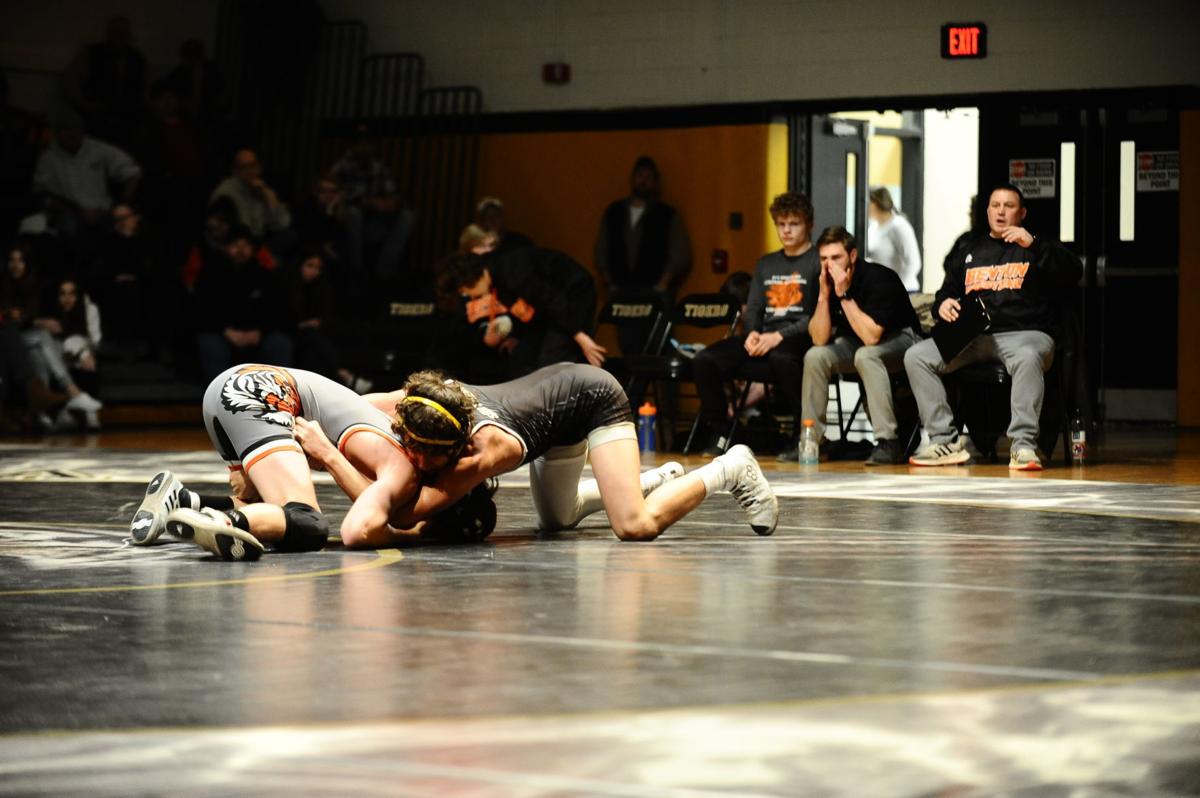 Southern Columbia's Mason Barvitskie, right, fights for position over Benton's Ethan Kolb during the 132-pound match at Southern Columbia High School on Tuesday. Kolb locked up a cradle for a last-second takedown to win, 2-1. 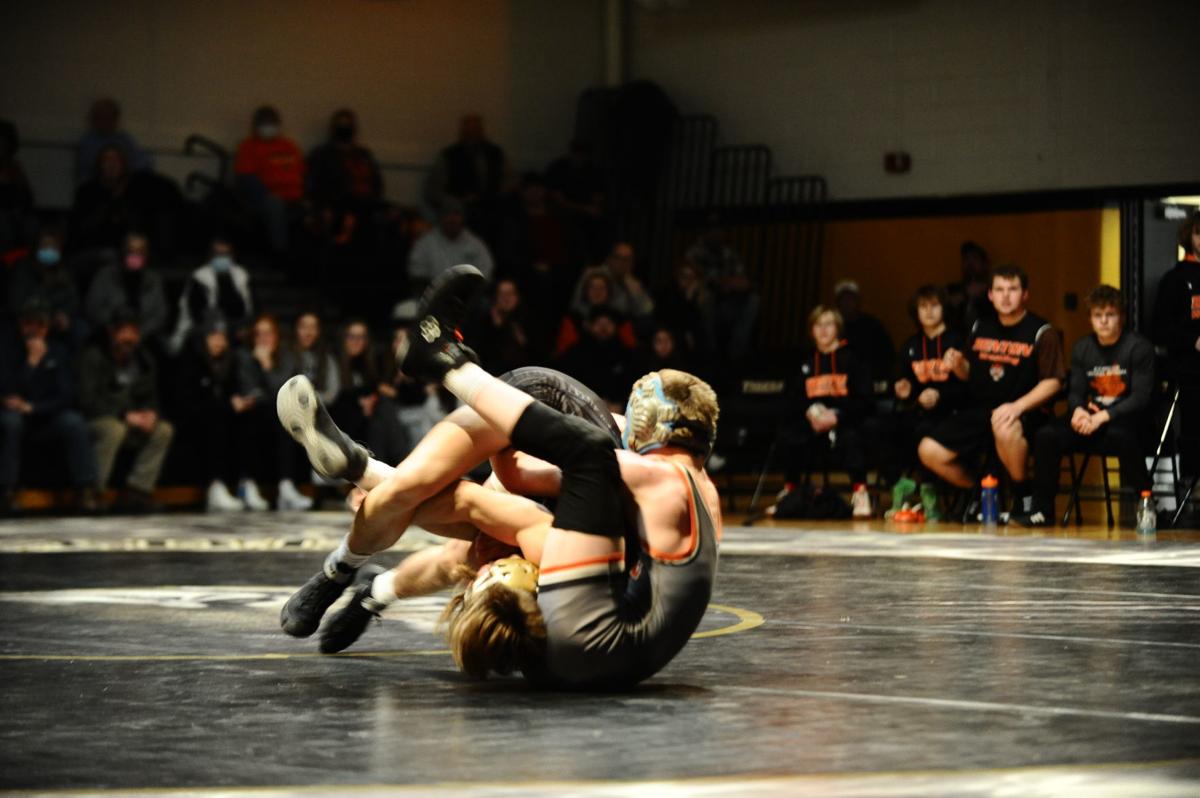 Southern Columbia's Mason Barvitskie, right, fights for position over Benton's Ethan Kolb during the 132-pound match at Southern Columbia High School on Tuesday. Kolb locked up a cradle for a last-second takedown to win, 2-1.

What happened, however, was not a shock to the Benton coach, but it most likely was to the large crowd of Southern fans.

The visiting Tigers opened with an 18-0 lead and, missing some of its usual big guns at the top, the home Tigers were never in contention, as Benton rolled to a 45-14 the nonconference victory.

It was Benton’s first win over Southern in seven years.

Nevertheless, the way Benton (3-0) wrestled, the absences only affected the final margin.

With the match starting at 113 pounds, Benton took control quickly as freshman Seth Kolb pinned sophomore Gaege Fronk in one minute, 50 seconds. Junior Chase Burke quickly made it 12-0 with a pin in 1:32 over junior Edward Zuber.

Wise added, “We wrestled with a little bit of swagger, and a chip on our shoulders,” said Wise. “After getting beat up by Southern for multiple years in a row, it was time for us to go out and do good work.”

He said after good performances in duals and a tournament at Indiana University of Pennsylvanian, “We were ready for this match, and I think we were maybe in a little better shape.”

Needing to stop the bleeding, the host Tigers then lost back-to-back one-point decisions. Sophomore Dylan Granahan edged senior Brady Feese 3-2 on a third-period escape and junior Ethan Kolb took Mason Barvitskie down with eight seconds left for a 2-1 win at 132 in a battle of state-ranked wrestlers.

“They were great wins and at 145, even though we didn’t win, we didn’t give up bonus points,” Wise said.

Southern coach Kent Lane said the fact that the visitors didn’t give up any pins is a credit to their coaches.

“I expected nothing less from Benton,” Lane said. “They compete hard every time we wrestle them, and we are little banged up.”

Noting that Benton won all the tight matches, Lane said, “I thought our effort was good. We just have to keep grinding.”

Southern finally got something going with back to back decisions from senior Kole Biscoe at 145 and sophomore Jaymen Golden at 145 to make it 18-6.

Biscoe, in his debut match of the season, won 3-1 on a second-period takedown over fellow senior Caden Temple. Golden won 5-0 over Remington Morrow, but nearly had a pin as time ran out in the second.

Biscoe said that, as a team captain, he tries to be positive, and the positive was that the young kids wrestled well.

“We are a young team, and the experience will help them the rest of the season.”

Southern next competes Friday and Saturday at the tough Escape the Rock Tournament and returns home to host Shikellamy next Wednesday. Benton will host unbeaten Montgomery on Thursday.