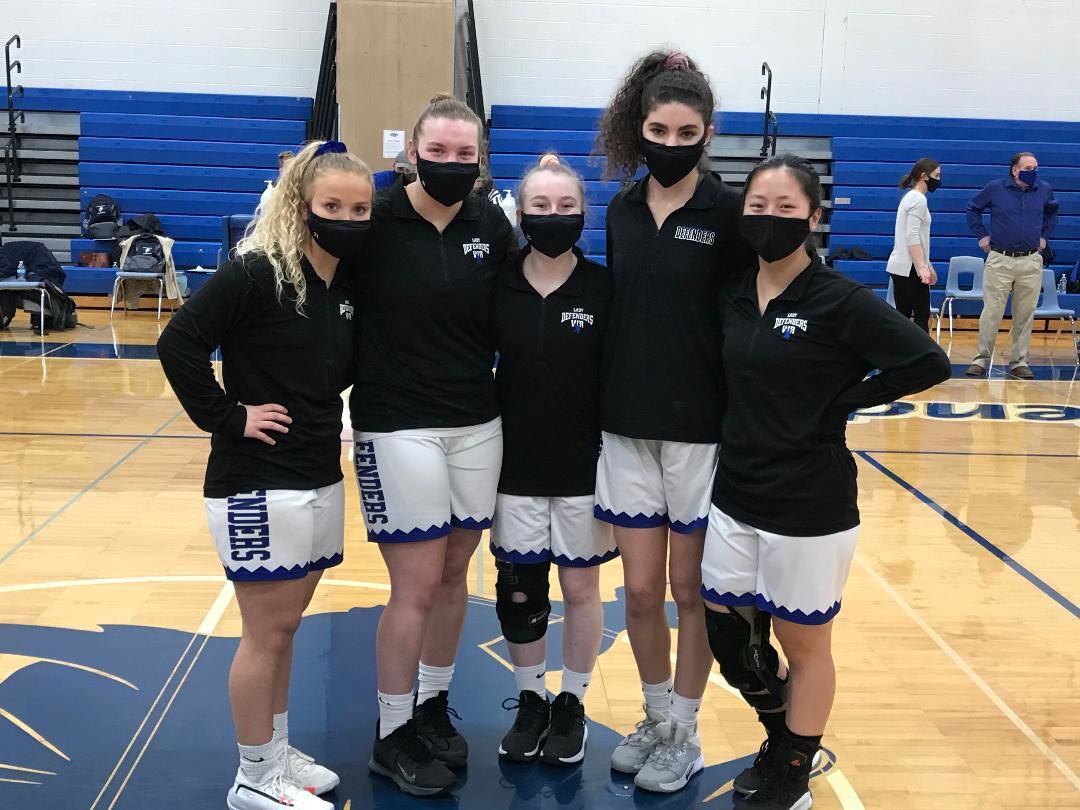 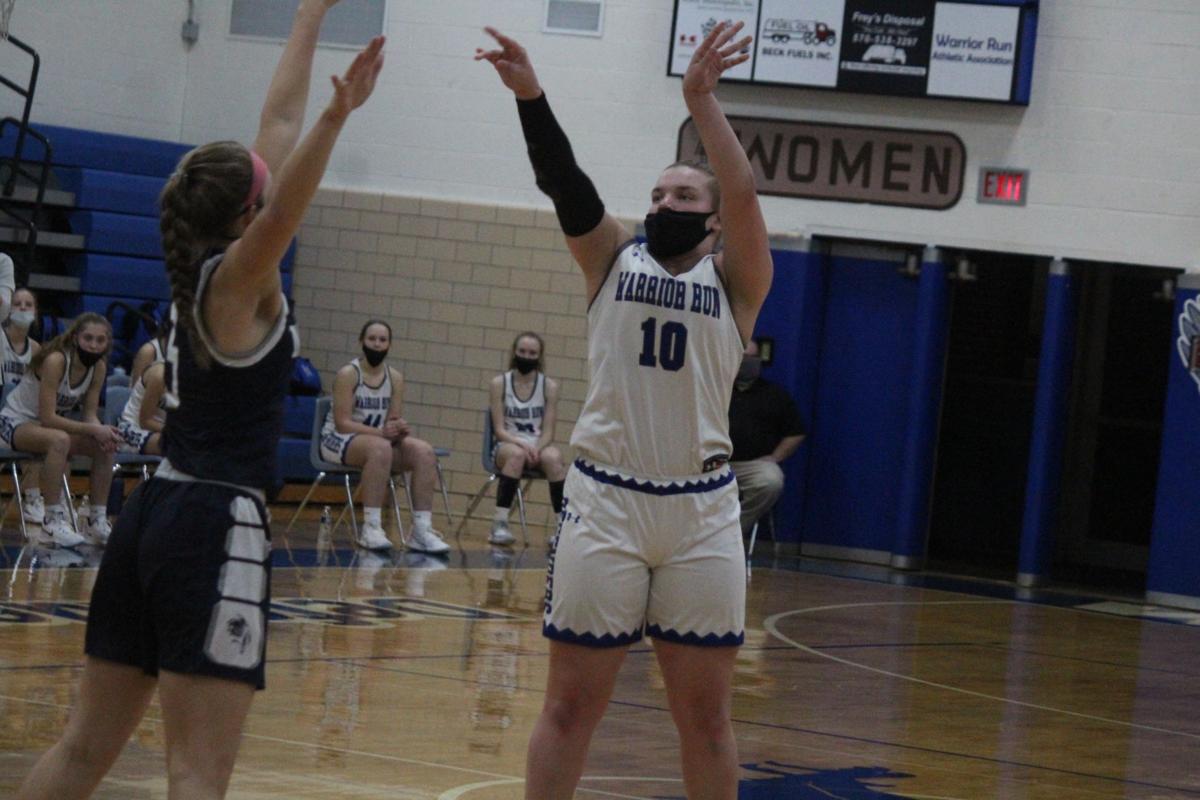 Warrior Run’s Sydney Hoffman shoots a jumper in the first half of Monday’s nonleague game against Muncy. 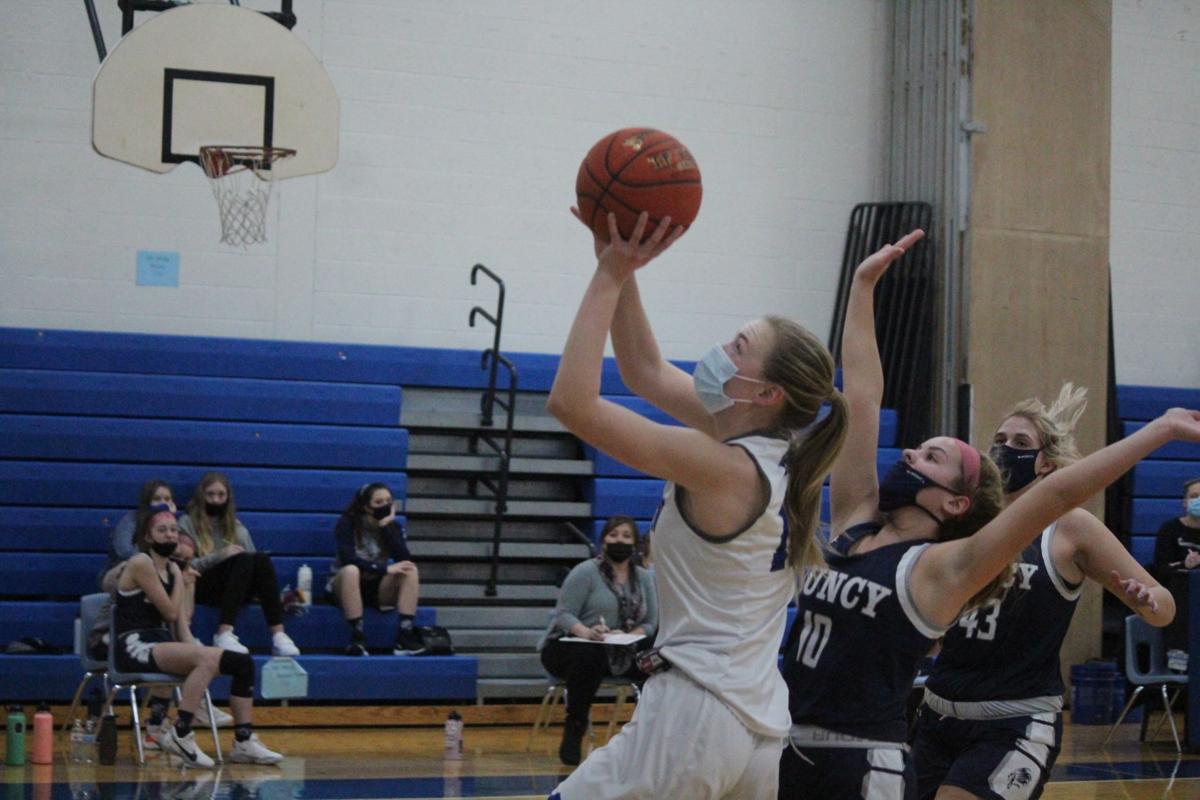 Warrior Run’s Alexis Hudson drives to the basket for a layup in the first half of Monday’s 48-35 win over Muncy. 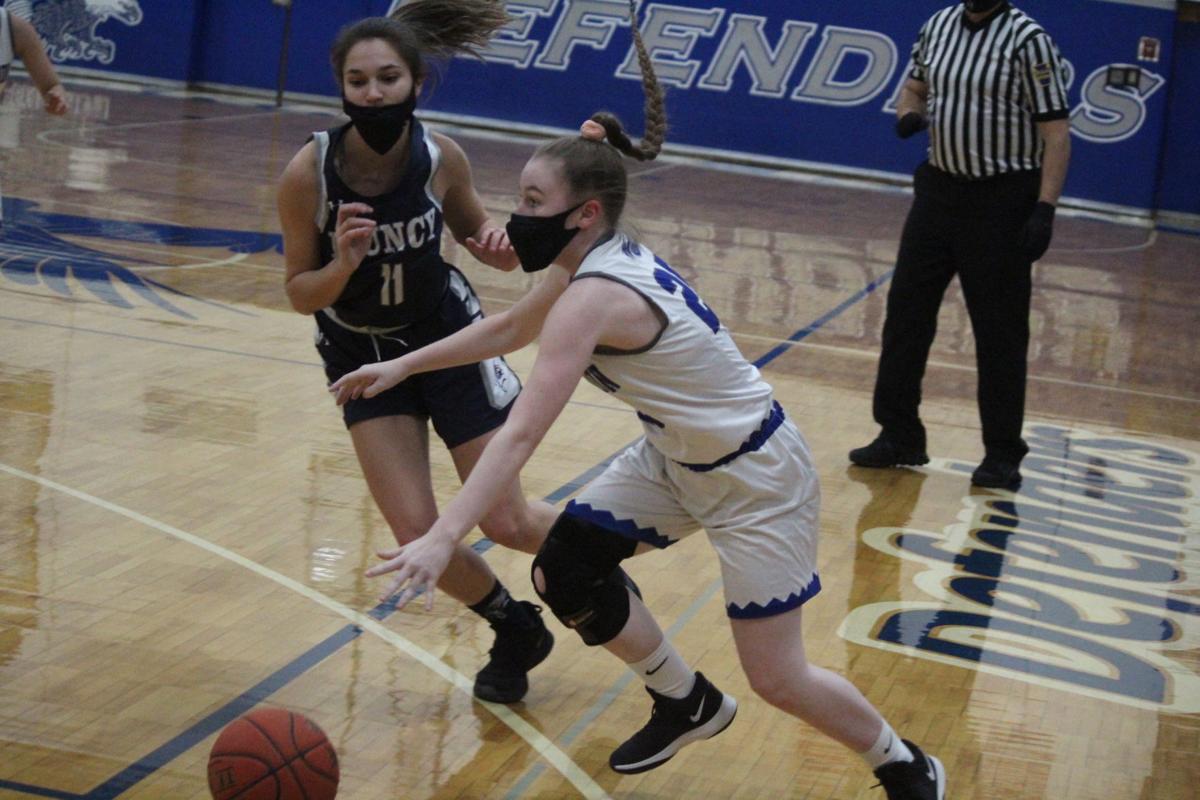 Warrior Run’s Jasmine Hollenbach dribbles past Muncy’s Arianna Copeland after she got the start in Monday’s Senior Night game against Muncy.

Warrior Run’s Sydney Hoffman shoots a jumper in the first half of Monday’s nonleague game against Muncy.

Warrior Run’s Alexis Hudson drives to the basket for a layup in the first half of Monday’s 48-35 win over Muncy.

Warrior Run’s Jasmine Hollenbach dribbles past Muncy’s Arianna Copeland after she got the start in Monday’s Senior Night game against Muncy.

TURBOTVILLE — On a night where Warrior Run celebrated its five seniors, upperclassmen guards Sydney Hoffman and Gracy Beachel naturally stepped up and had big games for the Defenders against Muncy.

But when Monday’s contest got tight at the end, Warrior Run had a few of its underclassmen step up when it mattered most against the Indians.

Hoffman scored a game-high 22 points, plus Beachel had 16 as Warrior Run took a 48-35 nonleague win over Muncy.

With one week remaining in the regular season Warrior Run improves to 5-8 with the win, and the Defenders solidified their placement in the Class 3A standings as the No. 5 team.

“Yes, I’m very happy with the win,” said Warrior Run coach Rachael Herb. “We’re really trying to work on our transition game, and I feel like towards the end of the season we’re finally getting a little bit more of a flow of it, so it was really nice to see them open up.

“I think we had some really nice equal scoring throughout everybody, and I think they dug deep at the end there and they did what they needed to get done, so I was very happy with them,” added Warrior Run’s coach.

Warrior Run never trailed in the game. The Defenders got out to an early 9-2 lead behind seven points from Hoffman and a basket from Beachel, who added a big 3-pointer moments later to give the hosts a 13-4 lead after one.

Muncy (7-5) managed to get to within a point at 19-18 late in the second period, but a jumper by sophomore Abby Evans of an assist from Beachel would get Warrior Run back on track.

Evans’ jumper started a 9-2 run for the Defenders, with the final seven points coming from Hoffman, who first connected off an assist by Beachel and then scored off a pair of assists from Katie Watkins to build Warrior Run’s lead to 28-20 at the half.

And when it came time for the third quarter, Warrior Run once again had a bad period.

The Indians held the Defenders to just six points in the quarter to close to within 34-31.

But in the fourth, a steal by freshman Alexis Hudson set up a scoring opportunity for Beachel, which resulted in a pair of free throws when the senior was fouled.

Beachel followed with a layup off a feed from Hoffman for a 38-31 lead. Later, a steal by junior Leah Grow set up a jumper by Hoffman, who then came up with a big block on the other end of the floor.

Over the next couple of minutes Hudson got a steal and then a rebound before hitting a jump shot off an assist from Hoffman to start putting the game out of reach of Muncy.

Then in the closing moments, Grow came up with another steal to set up a Hoffman jumper. One more basket by Hoffman preceded a bucket from Beachel to clinch the victory.

“I don’t believe in holding the ball. I believe that, whether we have the lead or not, my girls should look for those opportunities to score,” said Herb, whose team won despite the absence of junior forward Emily McKee, who was out with a sprained ankle. “I think sometimes when you don’t, that’s when you lose (the game). So I still always tell my players to look for those transition buckets and to still look for the open shots.

“I think tonight we were just very fortunate those shots fell in our favor, so it was nice to see and I was happy for (my players),” added Herb.

“The girls really just stepped up, and Hoffman came up real big with rebounding. She’s a tough kid — as well as Jordan Hartman — and those two have really stepped up as seniors,” said Herb. “They really got some rebounds to truly help us seal the deal.

“And I had a couple of younger kids in there that I felt came in on offense and actually got us some nice second-chance rebounds as well,” added Warrior Run’s coach. “We’re just trying to get the girls to look forward more than ever, and I think with Hudson (a freshman) in there, she really is a nice target for them that really helps us out.”

Next up for Warrior Run is a home game Wednesday against Milton.