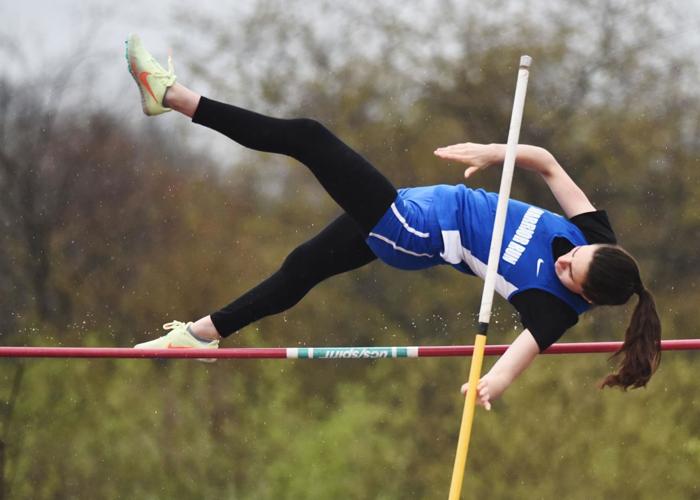 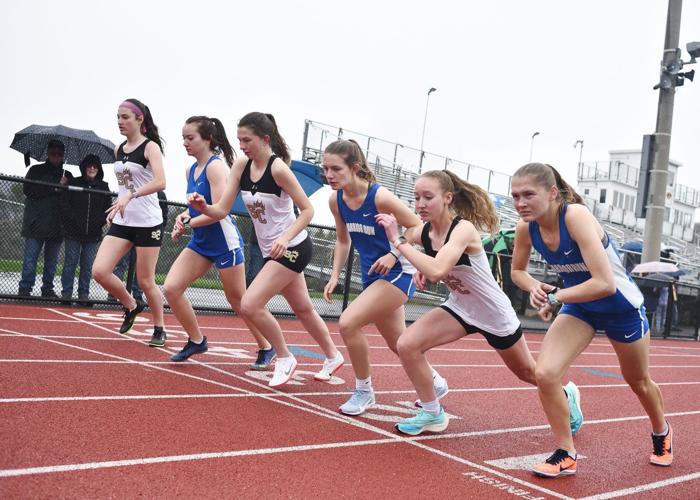 Southern Columbia and Warrior Run athletes leave the block at the start of the 1600-meter run during Tuesday’s dual meet at Tiger Stadium.

Southern Columbia and Warrior Run athletes leave the block at the start of the 1600-meter run during Tuesday’s dual meet at Tiger Stadium.

The Southern Columbia state sprint champion got two and a half weeks off from competition, thanks to some inclement weather, and returned to action in a cool, wet and breezy day Tuesday afternoon at Lanny Conner Field at Tiger Stadium.

Neither the weather, nor the layoff were able to cool off Wisloski.

The Tiger junior, in his only event of the afternoon, ran a blistering 10.6 seconds (hand time) in the 100-meter dash to break his own Tiger Stadium record (10.71). His career best FAT time is 10.74, at last year’s Leonard Stephan Invitational at Wilson-West Lawn.

On the girls’ side, Southern rolled to a 108-28 victory. The score was unusual because the Defenders had no hurdlers and were short in some other events.

Wisloski said the time off worked out perfectly to allow him to rest a hamstring injury which has disrupted his season.

“It was definitely helpful for me,” Wisloski said, noting that he has time to work to get ready for the second half of the season.

“These past couple days I was feeling better, and I was working on my starts, and I am starting to get way better,” he said. “I’m really excited that I’m back and hopefully I can stay healthy.”

Southern head coach Tom Donlan said Wisloski’s health has been a big concern and “You want to be cautious and make sure everything’s going well.”

“It was in the plan for him to come in for one event, see how it’s going and how things feel, and he’s been training and doing things to address his concerns,” Donlan said. “It was a good start to come back.’’

Wisloski conceded that he didn’t know until close to the time of the event if he would compete in the less than ideal weather conditions.

“Yeah, I was thinking about (not running). I was seeing how the rain was holding up and then I felt good, so I stuck with it,” he said.

After his outstanding run, he was glad he made the decision.

The Tigers will run at Bloomsburg in a PHAC-III dual that has been postponed twice, and, Wisloski said he is going to try to run all four of his events.

Although the Tigers had Wisloski back, at least for one event, they were missing a three-time gold medalist from last year’s state meet.

But the Tigers had plenty of remaining firepower.

Donlan was pleased with his team’s performance overall.

“I think we did real well, guys stepped up in the hurdles. Ashton (Helwig) had a good time,” he said.

He said the sprinters had a good day and they are coming along, and he said the throws went well, especially senior Tyler Arnolds.

“Tyler did well, taking first in the javelin, first in the discus. He’s working hard and doing a lot, coming over and doing the high jump and running in the 4x4,” Donlan said. “And he’s enjoying it.”

Warrior Run prevented the Tigers from sweeping the relays when its quartet of Nathan McCormack, Cody Goodspeed, Colby Levan and Alex Brown) finished off the meet by winning the 4x400 in 3:41.5.

Warrior run coach Shaun Landis said, “Week after week, we’re just trying to get the kids to improve, and the guys are sticking it out and toughing it out.”

He added, “We know we’re going to take our licks at dual meets, but we also have kids ranked pretty high in the district and we’re just trying help them improve and enjoy the sport.”

For the second year in a row, the Defenders (1-3) are forced to travel for all their meets as well as their practices (at Hughesville) as their stadium is being renovated.

The Defenders are also hampered on the girls’ side with low numbers, which led to Southern winning every event except the pole vault and the 1600.

Warrior Run girls coach Scott Hoffman, noting that he has 17 girls on the roster, said, “We are pleased with these kids. We’re winning as far as the program’s longevity and trying to figure out where you put kids in events.”

Although the Defenders are 0-4 with one dual meet left, Hoffman said that with a new facility next year, he sees a bright future.

“We hope to build more energy for our program, and I think good things are coming,” he said.

Several Tigers had outstanding days, led by senior Cassidy Savitski, who took first in the 400 and 200 dashes and the triple jump as well as running a leg of the winning 4x400 relay.

Southern girls coach Trent Donlan said, “Considering the weather and the kids got to compete for the first time in more than two weeks, we had a decent day. The kids are building on what they have done so far and hopefully it continues to climb for the rest of the season.”