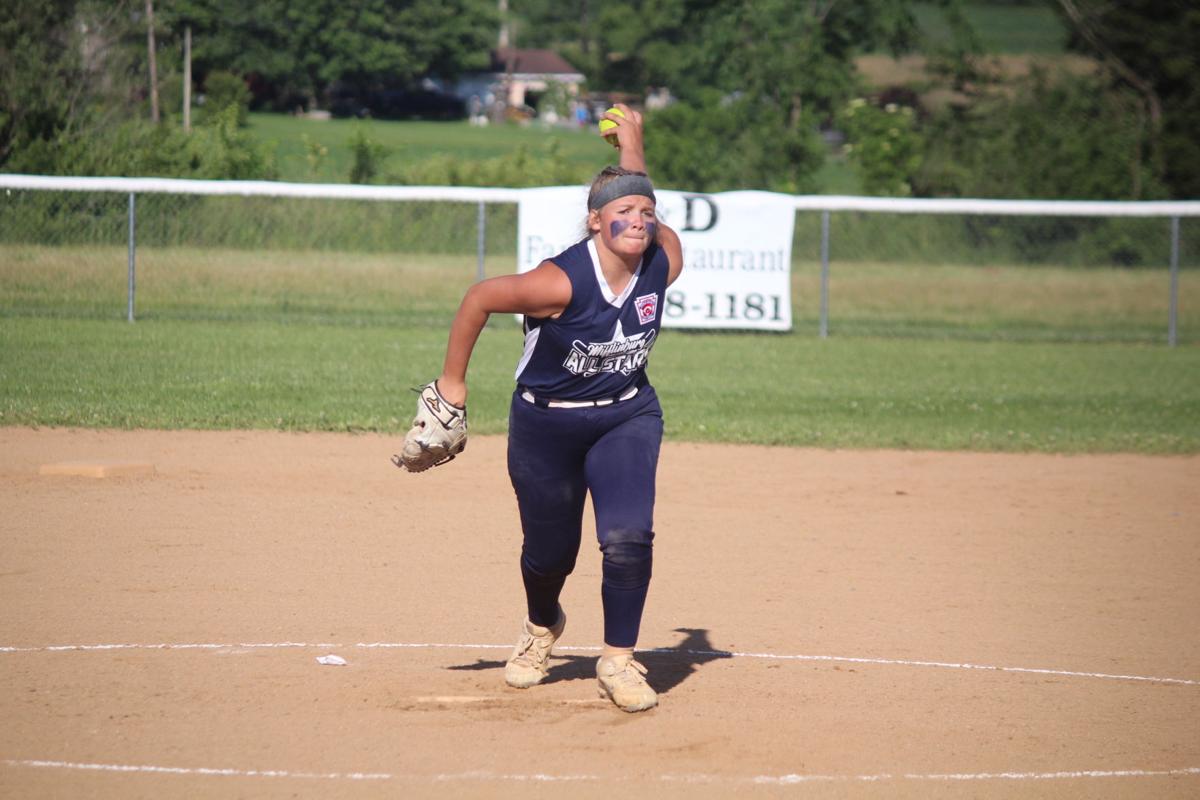 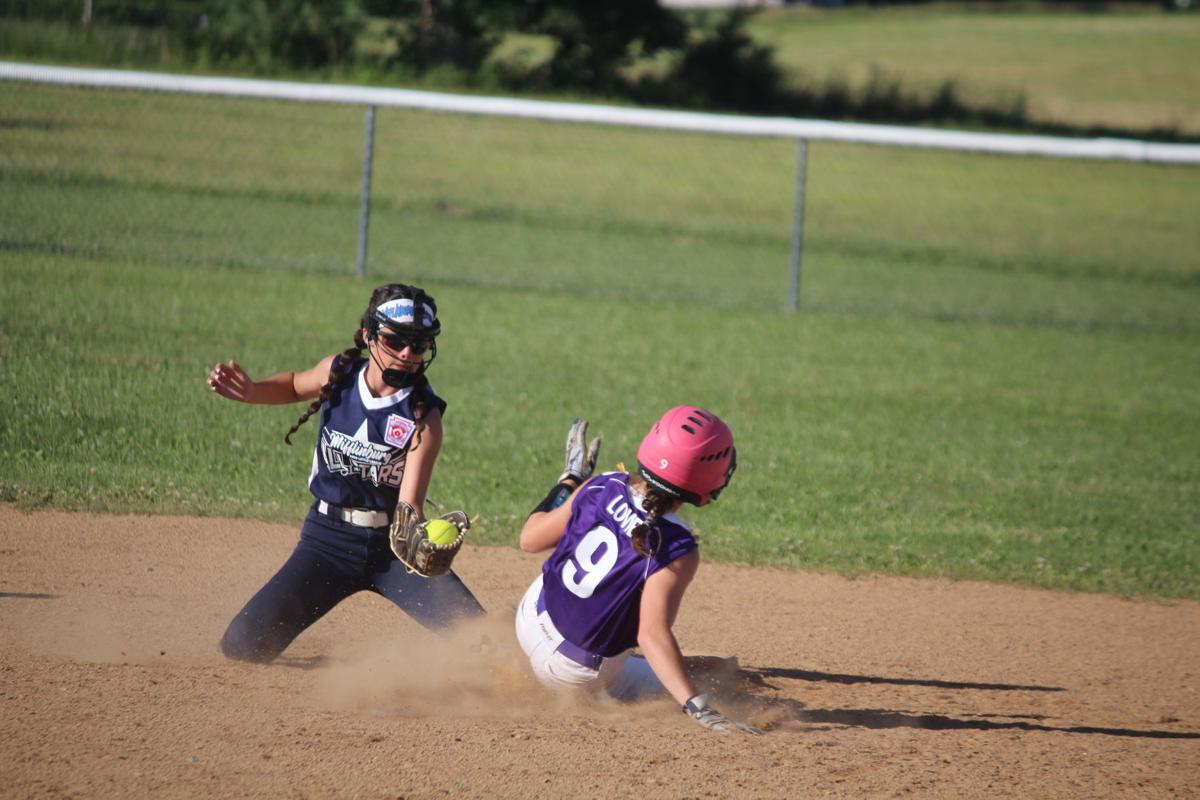 Mifflinburg shortstop Anna Pachucki is a little bit late in laying the tag on Danville’s Jillian Lowe after she stole second base in the second inning of Wednesday’s game. 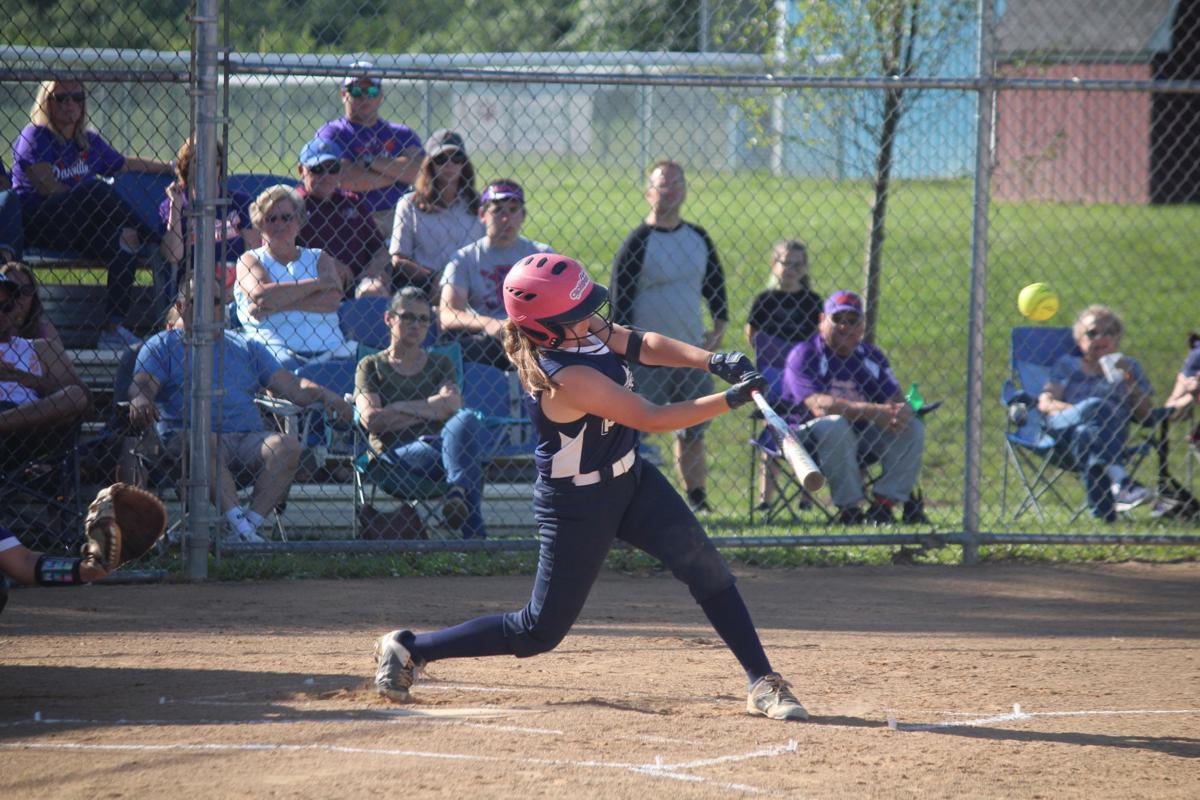 Mifflinburg’s Maggie Rubendall hits a two-run single in the second inning of Wednesday’s District 13 Major Softball game against Danville, which was won by Mifflinburg 11-0 in four innings. 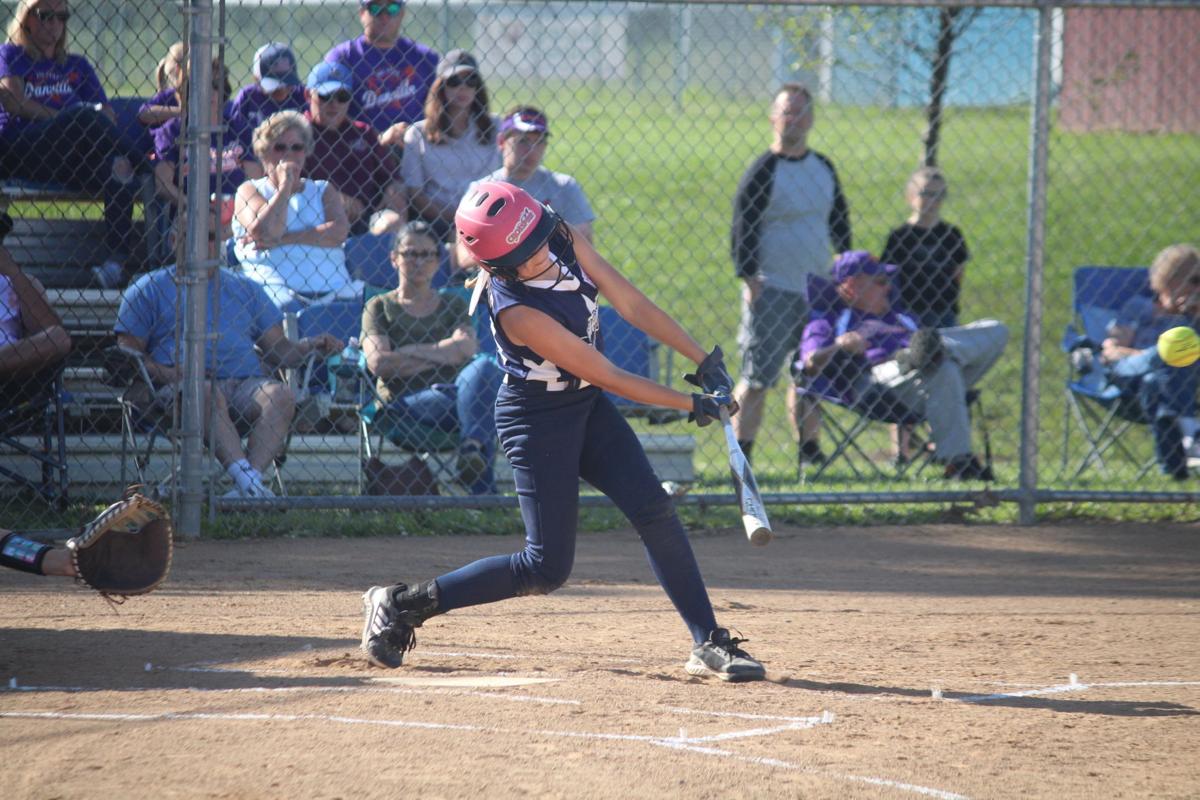 Brooke Gessner hits an RBI single in the second inning of Wednesday’s District 13 softball game against Danville. Mifflinburg scored seven runs in the inning to roll to an 11-0, four-inning victory.

Mifflinburg shortstop Anna Pachucki is a little bit late in laying the tag on Danville’s Jillian Lowe after she stole second base in the second inning of Wednesday’s game.

Mifflinburg’s Maggie Rubendall hits a two-run single in the second inning of Wednesday’s District 13 Major Softball game against Danville, which was won by Mifflinburg 11-0 in four innings.

Brooke Gessner hits an RBI single in the second inning of Wednesday’s District 13 softball game against Danville. Mifflinburg scored seven runs in the inning to roll to an 11-0, four-inning victory.

TURBOTVILLE — Although two days had passed since his team had first taken the field against Danville in their Major Softball matchup, Mifflinburg manager Heath Stewart was a little concerned that his girls could pick up where they left off on Wednesday.

He didn’t need to be.

After taking an early two-run lead in Monday’s contest before rain suspended the affair, Mifflinburg’s All-Stars tallied seven runs upon their return in the second inning to roll to an 11-0, four-inning victory over Danville in a District 13 Little League contest at the Moser Sports Complex.

Another win by Mifflinburg and the team claims the District 13 title and advances to the Section 3 Tournament hosted by District 15’s Roosevelt Trail Little League and held July 6-10. The games will be played at Wyalusing Boro Park.

“Yeah, I thought they (picked up where they left off). I mean, I was a little bit nervous because obviously it’s been two days now (since the game began),” said Stewart. “But, yeah, the girls were obviously ready to go.”

Mifflinburg’s first three batters all reached base to start the second inning. Aubrey Fluman walked and later scored on an error, and then Lainey Miller singled to center and Amelia Fluman reached on an error, the latter helped Miller come home to make the score 4-0.

Then with one out Anna Pachucki and Brooke Gessner both hit RBI singles to increase the lead to 6-0. Later on, Maggie Rubendall drove a two-run single to center before Aubrey Fluman, in her second at-bat in the inning, tripled to right to bring home another run to make it 9-0.

“I think (on Monday) the girls were a little bit nervous, but they got an inning in (and a 2-0 lead) and they were like, oh, we can do this,” said Stewart. “Honestly, it doesn’t surprise me (the girls scored seven runs in the second inning). These girls are very talented. They work with the high school coaches all year long and they put in extra time.

“I know what they can do, so it doesn’t surprise me. I’m glad they all came out firing and were aggressive,” added Mifflinburg’s manager.

Mifflinburg scored twice more in the fourth when Natalie Edison singled and later scored on a wild pitch. An error on the play also helped Chloe Shoemaker score as well after she got on base on an error.

That was plenty of run support for starting pitcher Taylor Stewart to get the win. Stewart struck out seven in three innings of work before giving way to Rubendall and then Pachucki in the fourth, whom manager Stewart wanted to give some work to.

Danville would make things interesting in the fourth by loading the bases with three straight walks. However, a line-out double play completed by Pachucki and Taylor Stewart, now at third base, preceded a strikeout by Pachucki to end the game.

“Taylor puts the work in. I don’t give her a whole lot of credit because she is my kid, but she definitely did very well tonight. We all believed in Anna, but she had to believe in herself. Once she made that double play I think she was relaxed and good to go,” said Mifflinburg’s manager.

“The girls are all excited (for today’s game). They are all close, and they are ready to go. They are ready to try to pick up where we left off two years ago (when the team won the District 13 title as 8-, 9- and 10-year-olds).

It's Chloe Showalter not Shoemaker