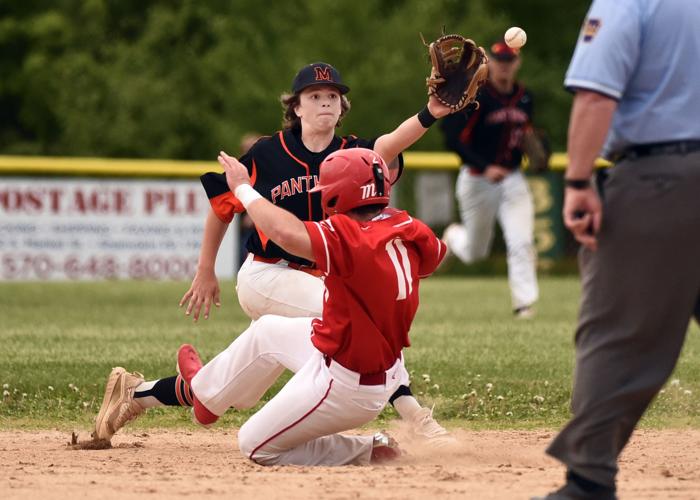 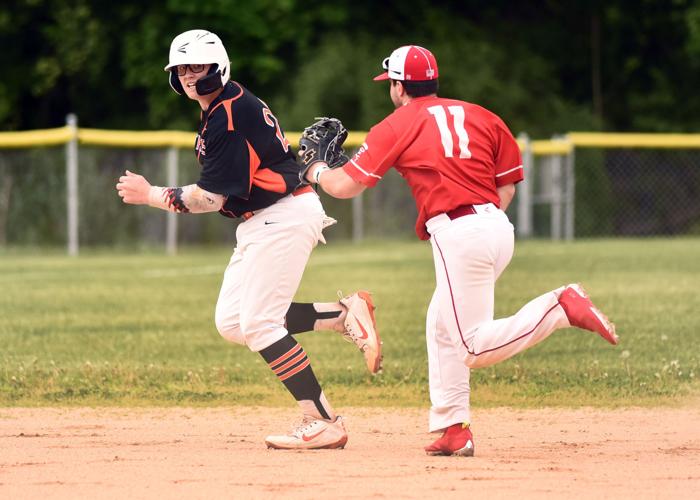 Mount Carmel’s Julian Stellar tags out Milton’s Logan Shrawder during a rundown between third and second during a game Wednesday afternoon at Kulpmont Veterans Memorial Park.

Mount Carmel’s Julian Stellar tags out Milton’s Logan Shrawder during a rundown between third and second during a game Wednesday afternoon at Kulpmont Veterans Memorial Park.

KULPMONT — The top of the first inning indicated Milton may spoil Mount Carmel’s plans of finishing its regular season with a win on Senior Day.

Luckily for the Red Tornadoes, there was plenty more baseball to be played after spotting the Black Panthers a four-run lead.

Mount Carmel’s bats woke up and answered with 15 runs over the next four innings en route to a 15-8 win on Wednesday, its 12th of the season.

Three of Mount Carmel’s four seniors — Casen Sandri (four), Julien Stellar and Devin O’Hearn (twice each) combined to reach base safely eight times. Zander Jones, who hasn’t played much this year, also got to start at third base and bat leadoff on the special evening for the victors.

“That’s the last game they’re ever going to play here. I hope they had a good time and I’m glad they were able to get the win,” Mount Carmel coach Brenton Eades said of his senior quartet. “It looked a little sketchy in the first when (Milton) scored four runs. I know Milton’s record might not show it, but they always hit the ball well. I’m definitely proud of what our kids did, going from being down 4-0 to battling back.”

After the bumpy first inning, Mount Carmel (12-8) freshman Clark Cartwright took over on the mound and did a phenomenal job of calming Milton’s offense, allowing no earned runs and striking out seven Black Panthers while walking none in his four frames of relief.

Fellow freshman Noah Shimko then got the ball for the last two innings, closing it out despite not having his best command.

The Red Tornadoes chipped away with three runs in each the bottom of the second and third to tie the contest at six-all after three, as Sandri and Colin Lokitis scored in both of those innings.

They both did so again in the fourth, when their squad finally fully broke out and posted an eight-spot, batting around in the inning before a single out was recorded.

Sandri, Jonas Battleyon and Damen Milewski each drove in a run, two more scored on separate errors and the other three scored thanks to a pivotal bases-clearing triple off the bat of Lokitis, who finished with a game-high four RBIs.

It appeared as if the Red Tornadoes, who built a 14-6 lead headed to the bottom of the fifth, were well on their way to their sixth mercy-rule win of the season, especially when they followed up by getting two of their next three batters on base.

However, Milton reliever Gehrig Baker escaped the jam allowing only one run before starting pitcher Dylan Reiff got that run back with an RBI groundout in the top of the sixth.

The Panthers scratched across one more run in the top of the seventh, completing their effort to extend the game to a full distance.

“They battled tonight. The game could’ve been over sooner, but our guys kept battling and plugging away,” Milton head coach Chip Rearick said. “If not for that one bad inning we had, it could’ve been a different story tonight.”

Playing in his last game, Milton senior Jacob Bair tallied a game-high three hits, driving in a run and scoring twice himself.

“Jacob attends Meadowbrook. They co-op with us for baseball, and he works hard. He struggled some this season, but tonight, it was his night. I’m so proud of him. He saw the ball well and had great hits. It was awesome. Good for him,” Rearick said.

The very young Black Panthers finish their season with a 3-16 record, matching their win total from a year ago.

However, they’ll only lose three kids to graduation and return the rest of their team, including several freshman starters.

“We just need to clean up some things. We’re very young, as we’re only losing three seniors. There’s a lot of good kids returning next year, and they’ve stayed positive. This is the best group of kids I’ve coached since I’ve been coaching. I’m very proud of them, and we’re just going to get better. A lot of freshmen played tonight. They’re buying in, and that’s what we need them to do.”