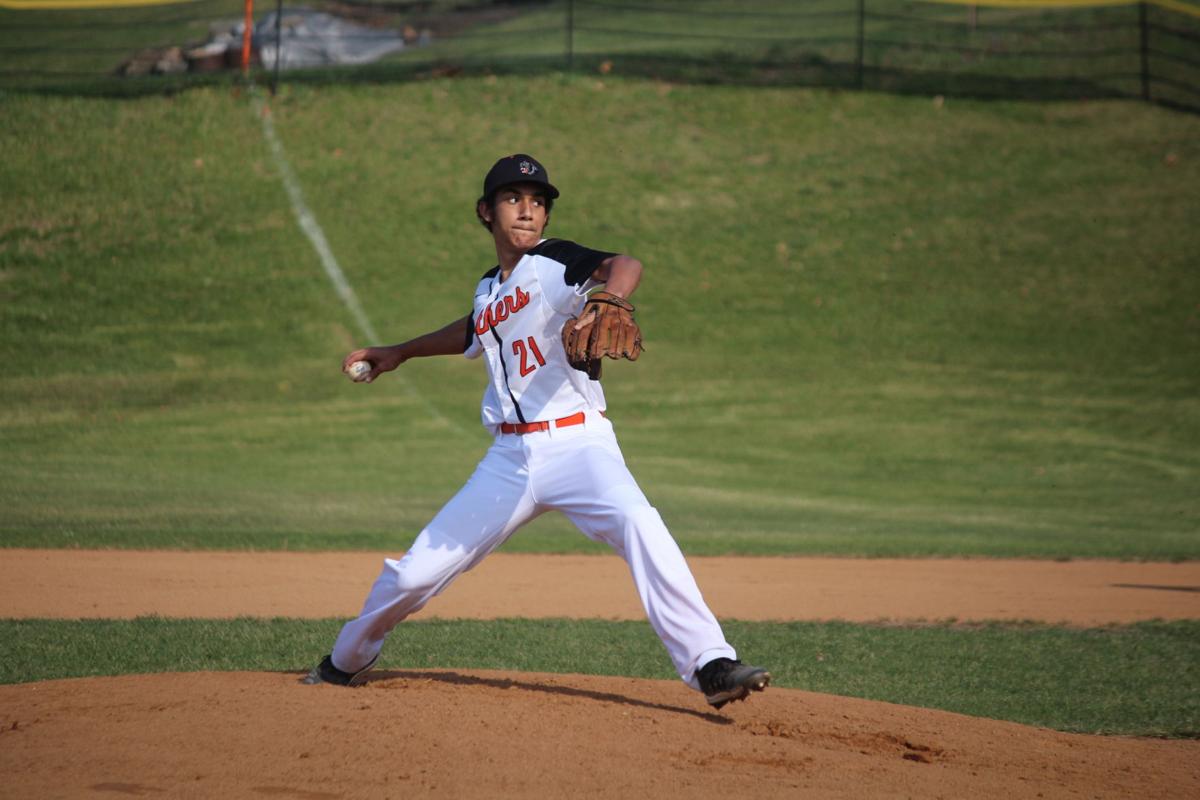 Milton’s Dillan Guinn-Bailey throws a pitch in the first inning of Wednesday’s game against Warrior Run. 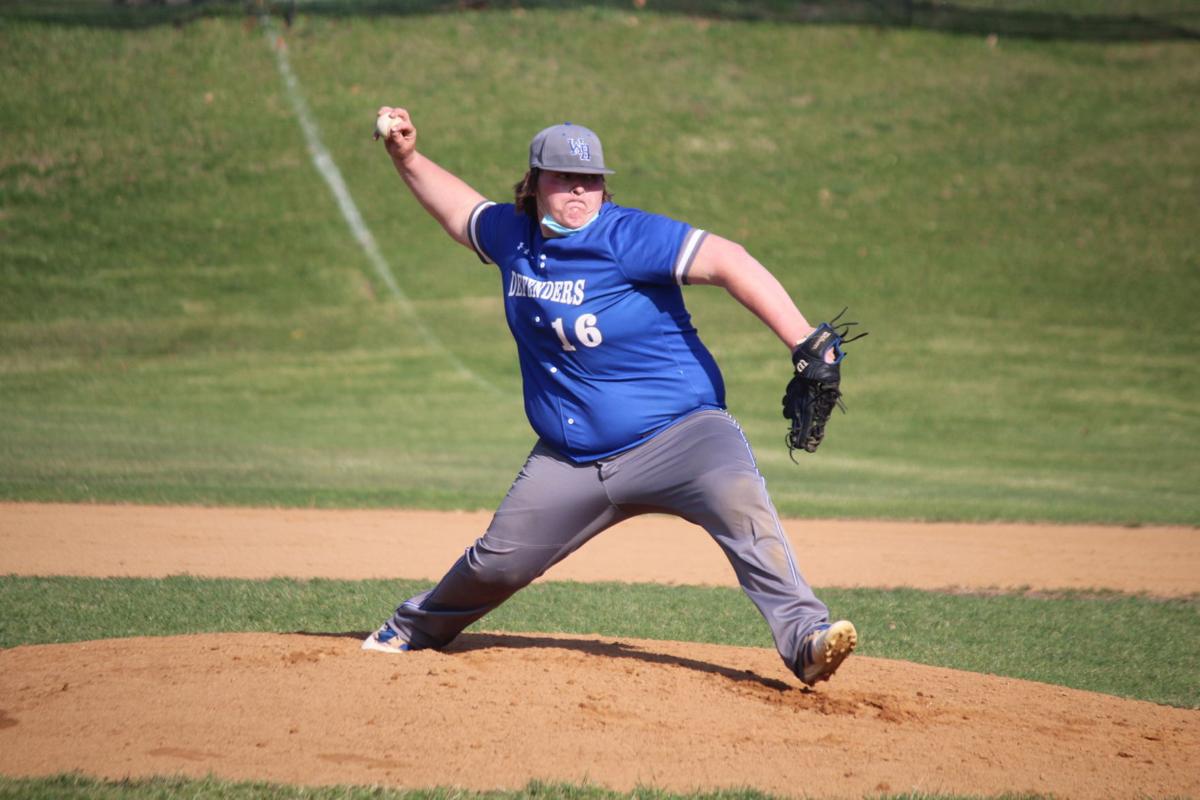 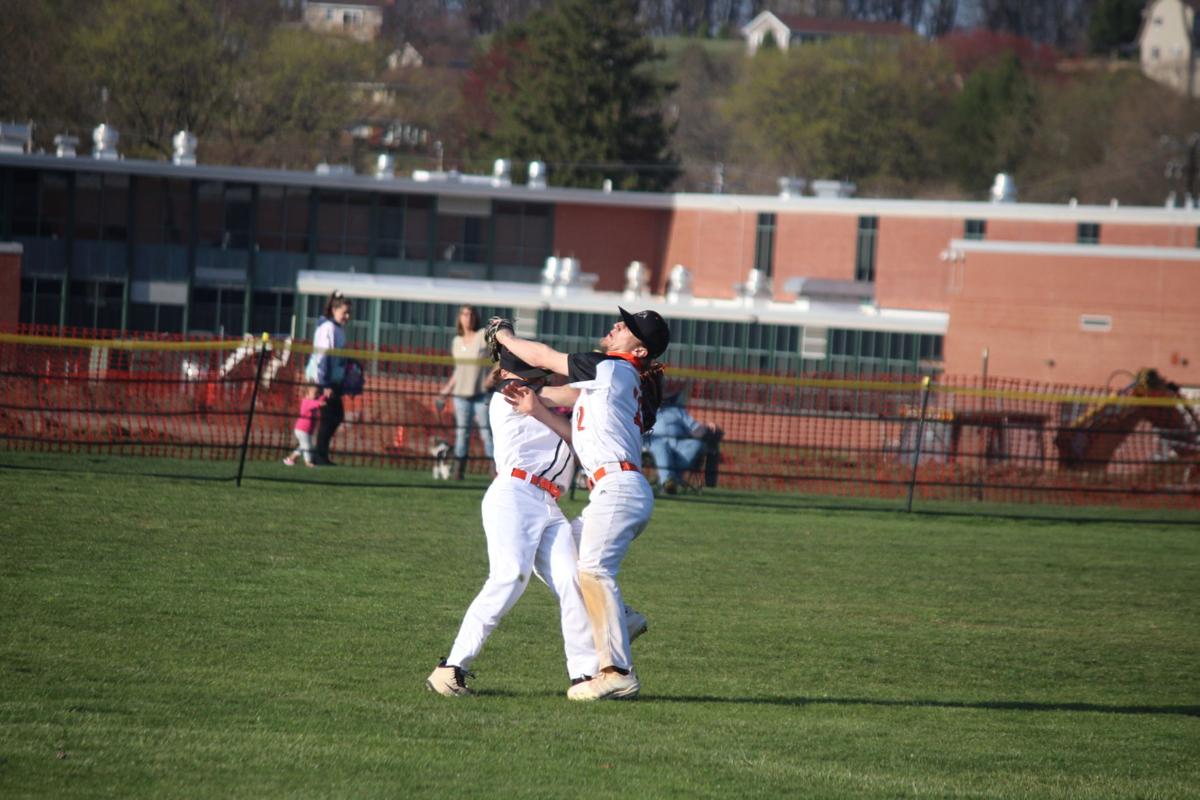 Milton left fielder Quinn Keister and shortstop Chase Hoffman collide in the fourth inning going after a pop up. Hoffman made the catch on the play. 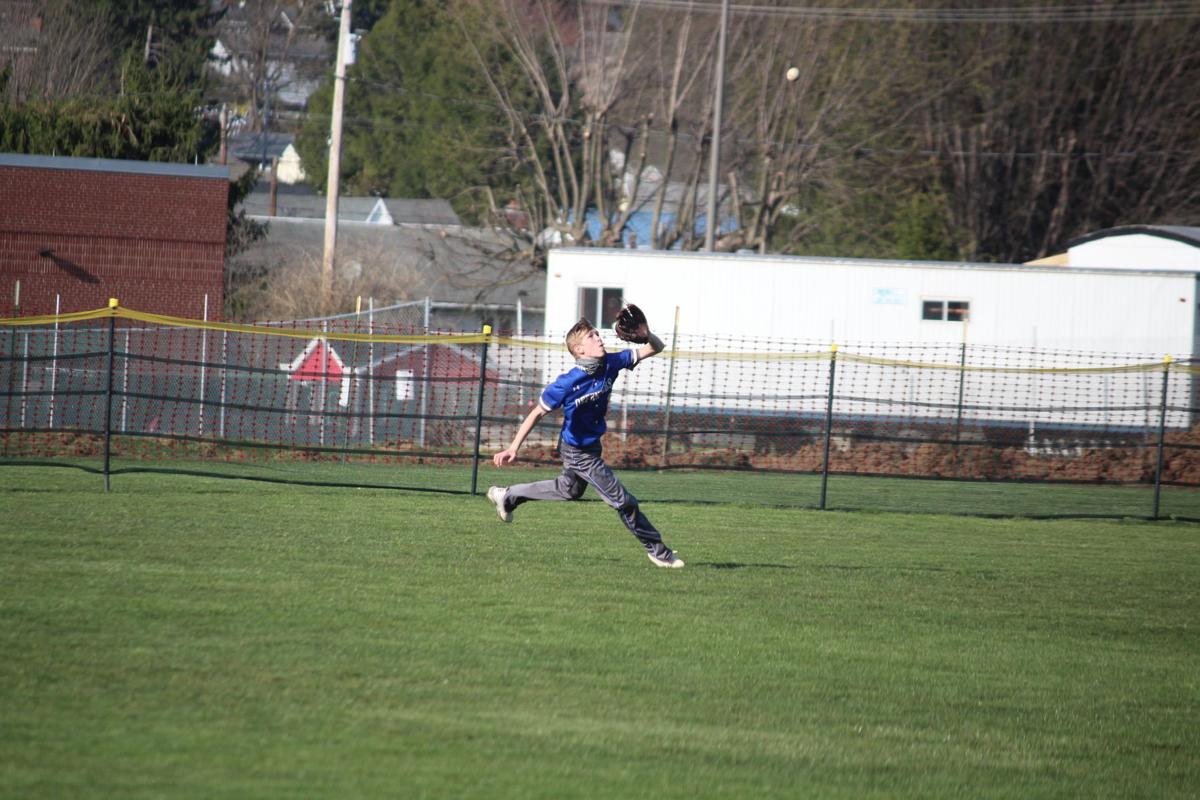 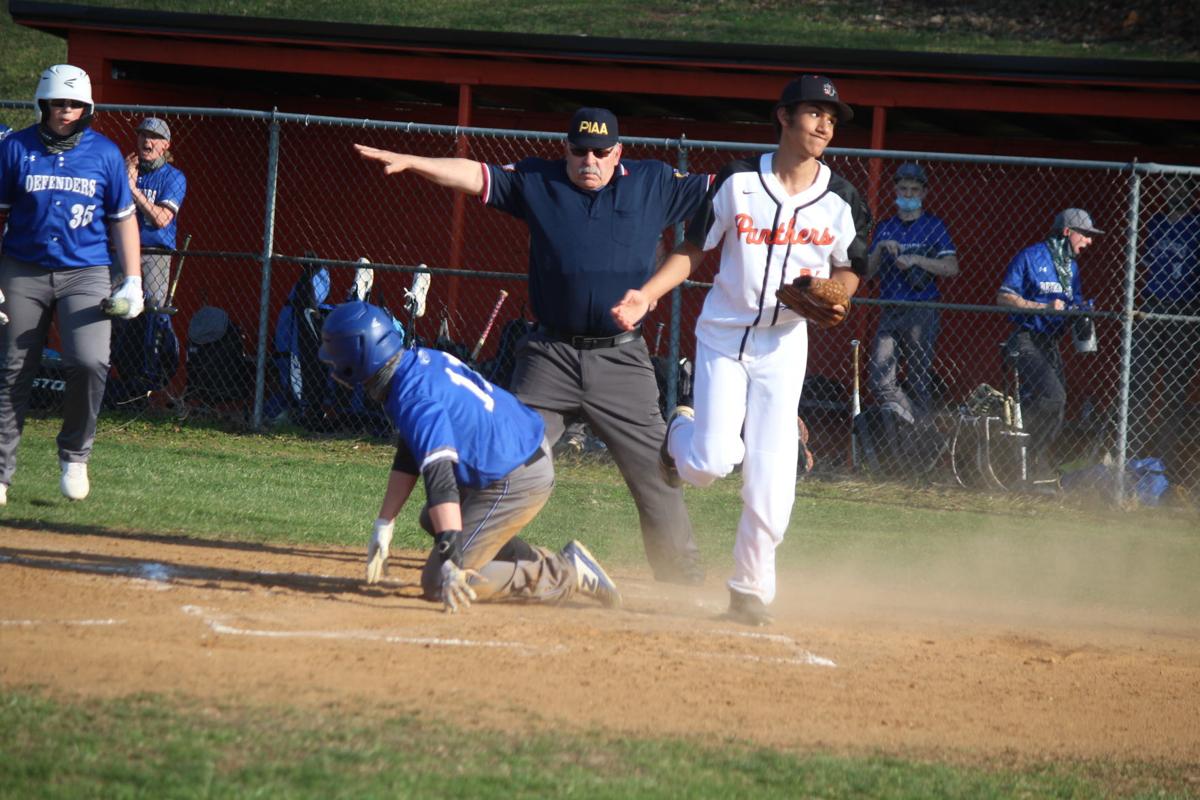 Home plate umpire Steve Buttorff calls Aiden Lewis safe after he scored on a wild pitch in the fourth inning. Lewis was able to slide underneath the tag of Milton pitcher Dillan Guinn-Bailey. 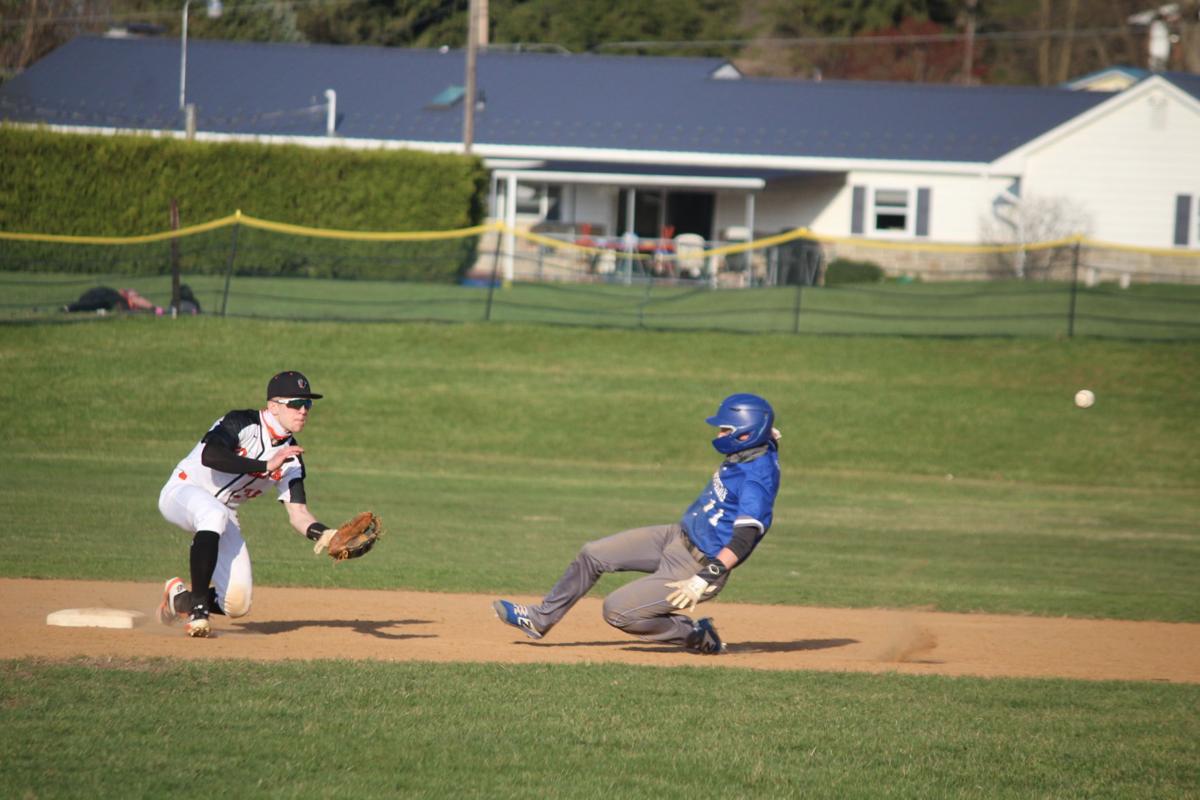 Warrior Run’s Aiden Lewis slides into second with a stolen base as Milton’s Ethan Rowe awaits the throw from his catcher in the seventh inning of Wednesday’s HAC-II contest.

Milton’s Dillan Guinn-Bailey throws a pitch in the first inning of Wednesday’s game against Warrior Run.

Milton left fielder Quinn Keister and shortstop Chase Hoffman collide in the fourth inning going after a pop up. Hoffman made the catch on the play.

Home plate umpire Steve Buttorff calls Aiden Lewis safe after he scored on a wild pitch in the fourth inning. Lewis was able to slide underneath the tag of Milton pitcher Dillan Guinn-Bailey.

Warrior Run’s Aiden Lewis slides into second with a stolen base as Milton’s Ethan Rowe awaits the throw from his catcher in the seventh inning of Wednesday’s HAC-II contest.

The two teams battled back and forth through the first three innings, but when the game got knotted up in the fourth Milton leadoff hitter Ethan Rowe would provide the big hit to give the Black Panthers the edge.

Rowe slugged a three-run double to deep right to break the tie and give Milton a much-needed 6-4 victory over Warrior Run.

“The boys battled today, and they battled hard. We still made a lot of mistakes yet, but we’ll get through it,” said Milton coach Chip Rearick. “I told the boys to just keep fighting, and they did.”

Warrior Run (0-2 overall and HAC-II) took a 3-2 lead in the fourth when Aiden Lewis scored on a wild pitch and Hunter Saul hit into a fielder’s choice that plated pinch runner Tanner Confair.

Rowe then tied the game at 3-all in the fourth with an RBI double to center. Aiden Keiser, who reached on an error and advanced to second on Tyler Strous’ sacrifice bunt, scored on Rowe’s hit.

An inning later Milton (1-2, 1-2) set the stage to retake the lead when Quinn Keister led off with a single and then moved to second on Luke Reitz’s sac bunt.

A walk by Keiser and a single by Luke Goodwin followed to load the bases, and in the next at-bat Rowe hit his three-run double to clear the bases and give the Black Panthers a 6-3 lead and plenty of cushion.

“I was just going up to the plate swinging, and doing what I do,” said Rowe. “I was just trying to make contact and get my team in the right position.”

And even though Rowe was thrown out trying to stretch his double into a triple, it didn’t matter. The damage was done.

“(Getting a run in) was all that was going through my head,” Rowe said as he began rounding the bases. “My teammates scored and we got three runs in, so if I made it, I made it, and if I didn’t, I didn’t.”

He did get a run in (and then some), and coach Rearick was glad he did.

“That was a big hit with the bases loaded, and the boys needed that. We’ve been in baseball games this season, but tonight we did a lot better. We didn’t have many errors tonight, which is a lot better than we’ve been doing,” said Rearick, whose team next plays at Lewisburg at 11 a.m. Saturday.

“So, I think we’re on the right track now and we’re going to get going, and I’m very proud of these guys. We worked really, really hard (to get this win). We have a lot of rust to knock off, but we’ll be okay.”

Warrior Run got a run back in the sixth on Mason Sheesley’s RBI single that brought home Logan Shrawder, who walked to start the inning.

But Milton relief pitchers Luke Reitz and Austin Gainer slammed the door on the Defenders after that as they combined to strike out five of the final nine batters. Reitz got the win in relief of starter Dillan Guinn Bailey (6ks, 3BB, 3H, 4ER).

The beginning of the game saw the Defenders take a 1-0 lead in the first on an RBI single by Buck, but the Black Panthers tied the game in the bottom of the inning when Carter Lilley scored on a double steal.

Milton later took a 2-1 lead in the third on an RBI single by Dylan Reiff before Warrior Run went ahead with two runs in the fourth.

Despite the loss, Warrior Run coach Harold Raup liked the positives that he saw from his team.

“We had plenty of chances there (to win), but I’m very proud of them,” Raup said. “We got a really young team and I believe they really grew up tonight. I really saw a great effort from them.

“I got seven kids who’ve never played varsity baseball before, so they are really growing up and I’m really looking forward to the next few games that we’re playing,” added Raup, whose team plays at Southern Columbia at 4:30 p.m. Friday in its next game.