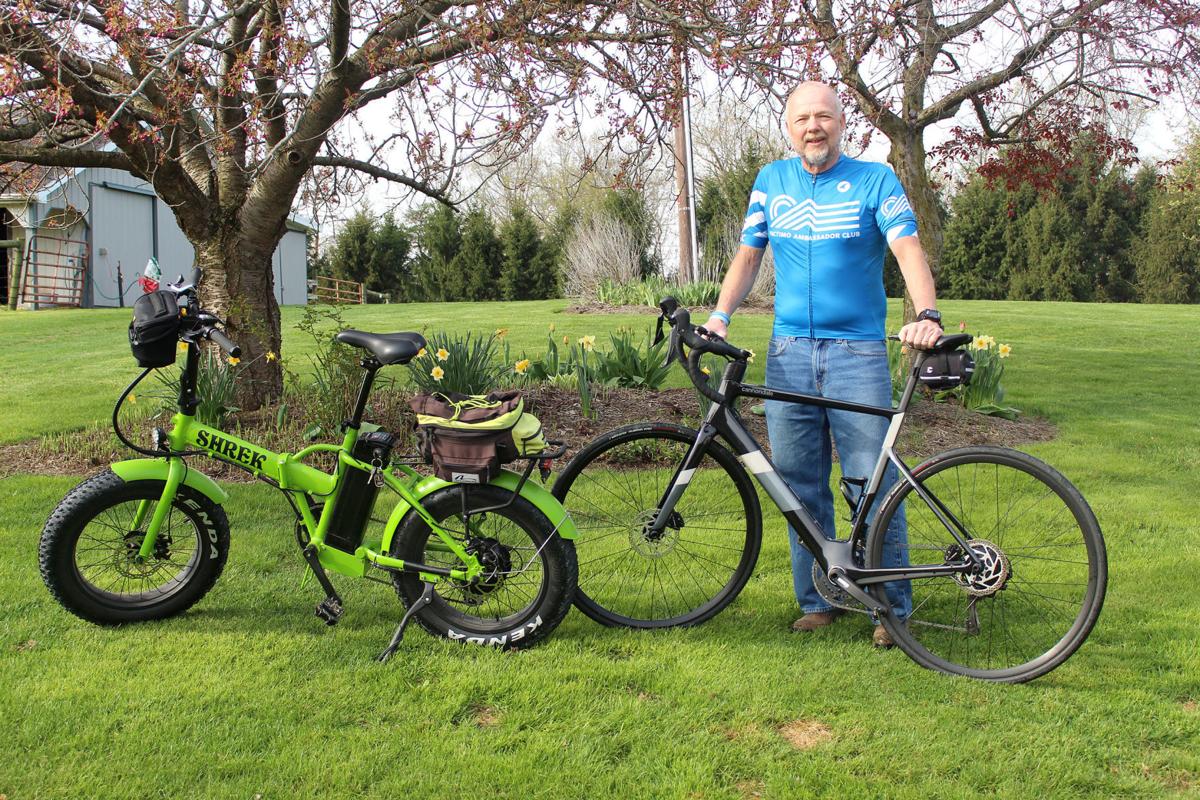 Larry Ryan, with two of his eBikes. In total, Ryan owns 14 bicycles, including three electronic ones. 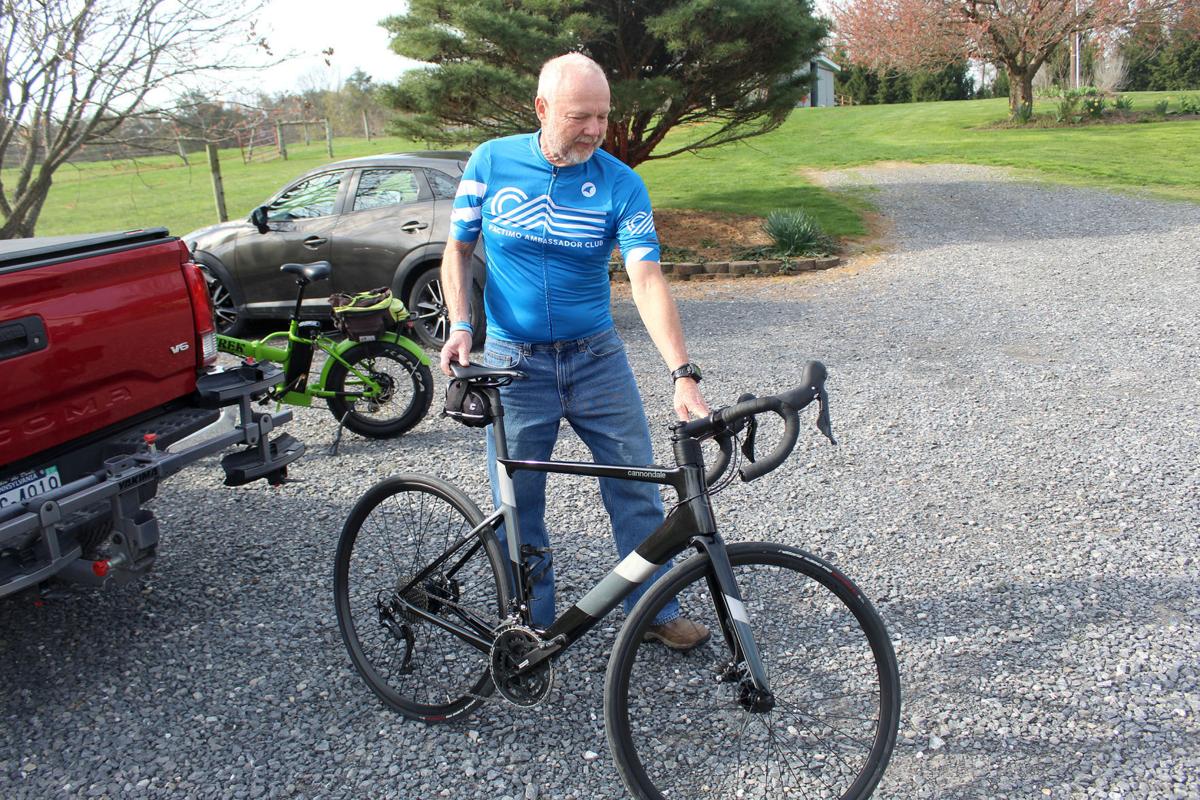 Larry Ryan prepared one of his eBikes for a ride. 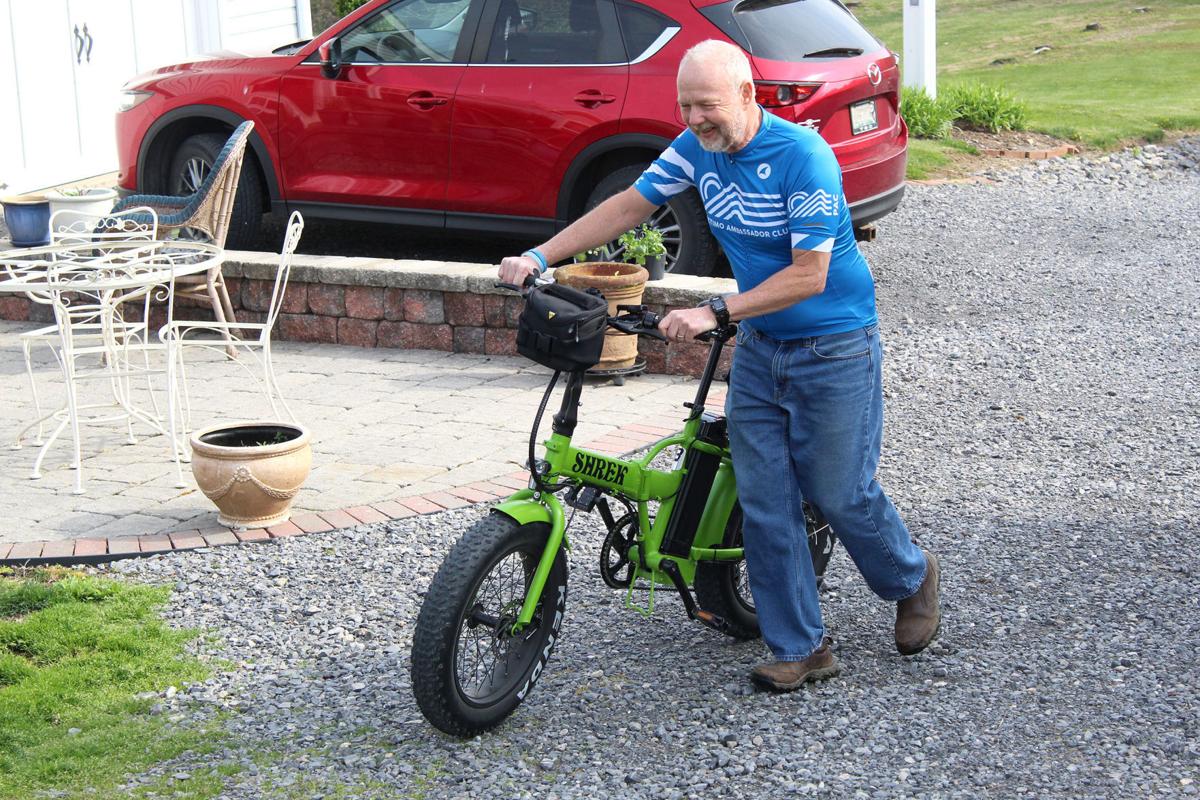 Larry Ryan, an avid bicyclists, pushed one of his eBikes along his driveway while preparing for a ride.

Larry Ryan, with two of his eBikes. In total, Ryan owns 14 bicycles, including three electronic ones.

Larry Ryan prepared one of his eBikes for a ride.

Larry Ryan, an avid bicyclists, pushed one of his eBikes along his driveway while preparing for a ride.

WASHINGTONVILLE — As Larry Ryan pushed a green Shrek eBike along the driveway at his Montour County home, he noted the joy those experience when they get on the bike.

"Everybody who gets on that bike always has a smile on their face," Ryan said. "You get on that, you hit the throttle and you go."

Ryan and Montour Area Recreation Commission (MARC) Director Bob Stoudt both said the popularity of recreational bicycling has exploded over the past year. In addition, Ryan said eBikes are increasing in popularity.

Ryan, an avid bicyclist and member of the Williamsport Bicycle Club, leads at least two group bicycle rides each week. One leaves from the Montour Preserve near Washingtonville, the other from Marty's Bicycle Shop in Muncy.

Typically, Ryan uses an app to plot the path riders will follow.

"I try to pre-ride a lot of them," Ryan said, of the routes he plots. "I pick the route, show people where to go, make sure everybody gets back safely."

"Road-based cycling has continued to be strong," Stoudt said. "Many people... they begin and end their rides at the Montour Preserve.

"Even though you can't ride bikes (on trails) at Montour Preserve, we have great parking and facilities," he continued. "That part of Montour County is beautiful, in terms of low volume of traffic, lots of scenery."

Often, Stoudt said bicyclists will arrive by automobile at the Montour Preserve in late morning, park at the Visitors Center lot and leave on their bike ride.

He said the riders will traverse Montour and upper Northumberland counties, sometimes even riding into the area known as the Muncy hills.

"We go all directions out of (Montour Preserve)," he said. "Some routes you can make really hilly if you want to... Some can keep flat.

Both he and Stoudt said there's been "explosive growth" of mountain biking over the past year.

"Gravel riding has really picked up," Ryan said. "A lot of people head over to the Mile Run area (of Union County) to ride... There's a lot of riders out of there."

Depending on funding, Stoudt previously said construction of the pump tracks could begin in spring of 2022, with completion that summer.

According to Ryan, eBikes have also become popular.

In total, Ryan owns 14 bicycles. He uses the bike best suited for each ride he takes.

"I know four people that wouldn't be riding if they didn't have the eBikes," Ryan said. "My road (electronic) bike is pedal assist. You are still doing the work."

Either because of aging or various medical conditions, Ryan said the four individuals he knows wouldn't be able to continue enjoying the sport they love if not for the eBikes, which provide varying degrees of assisted pedaling.

"I usually ride (an eBike) on a group ride so I can keep up," Ryan said. "I'm not a great climber. It really helps on the hills."

If an eBike's battery is nearly drained, Ryan said it could take four to five hours to charge the bike, which is accomplished by plugging it into an electrical outlet.

How often the bike needs charged depends on how much pedal assist the rider uses, Ryan explained. One of his bikes could be ridden for 100 hours before needing charged.

He believes the growth of popularity in bicycling will continue.

"Some people think it's a fad," Ryan noted. "You go to a lot of the (bicycle) shops, they have nothing to sell."

He said it can take three to four weeks to have a bicycle repaired due to shops being overloaded with customers.

"Our region is really fortunate to have several top-notch bike shops," Stoudt said. "The bike shops, they've been tremendously busy over the past year... They are having challenges getting stock (due to) incredibly heavy demand."

He said MARC is working with about one-dozen regional partners — including the Susquehanna River Valley Visitors Bureau, Columbia-Montour Visitors Bureau, the Department of Conservation and Natural Resources, Pennsylvania Interscholastic Cycling League and regional land managers — to find ways was "capitalize on the interest" in bicycling.

"We are looking for ways to promote our five-county region as a biking destination," Stoudt said. "We have some great rail-to-trail opportunities."

Specifically, he pointed to the Buffalo Valley Rail Trail in Union County as an ideal spot for bicycling. Stoudt also noted the Hess Loop Trail in Danville as a good spot for biking.

"Those are the best ones that I know of, in terms of entry level, almost flat rides," he said. "Those are appealing to families... Our region is fortunate to have several great resources like that."