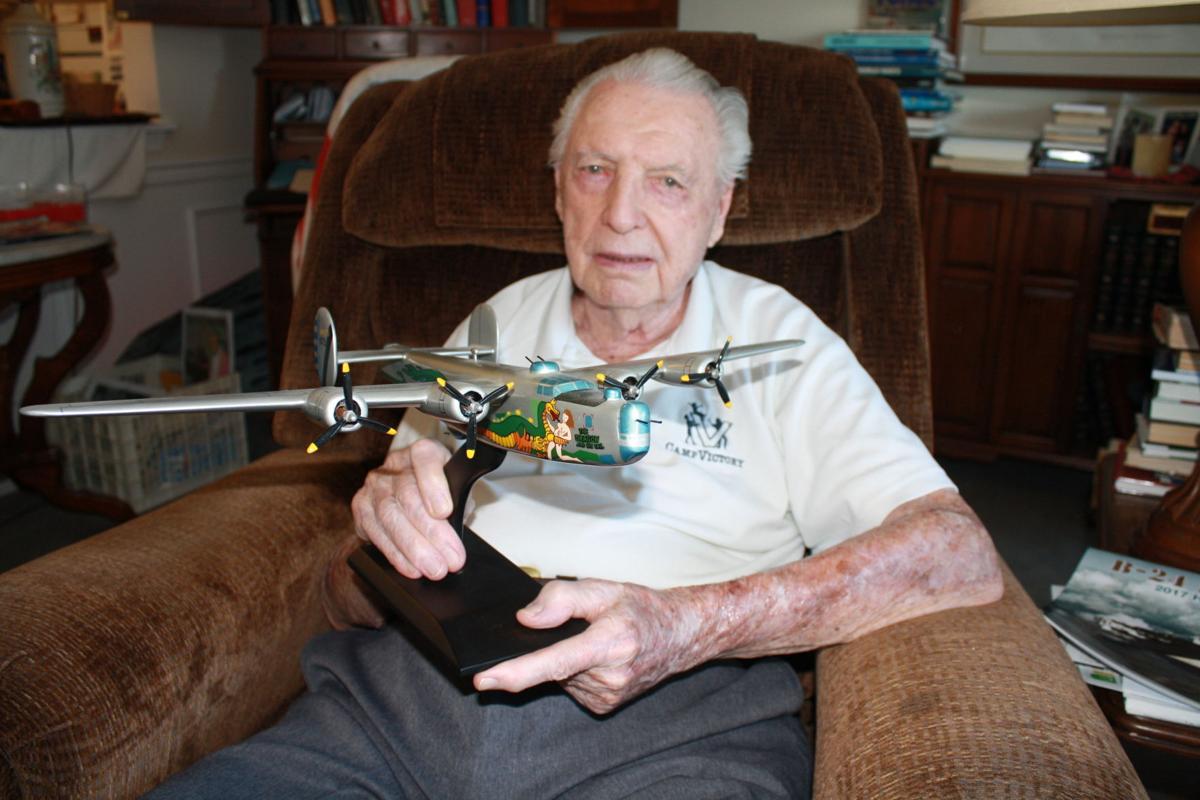 Joe Diblin with a model of the bomber he loved so much — the B-24 Liberator. 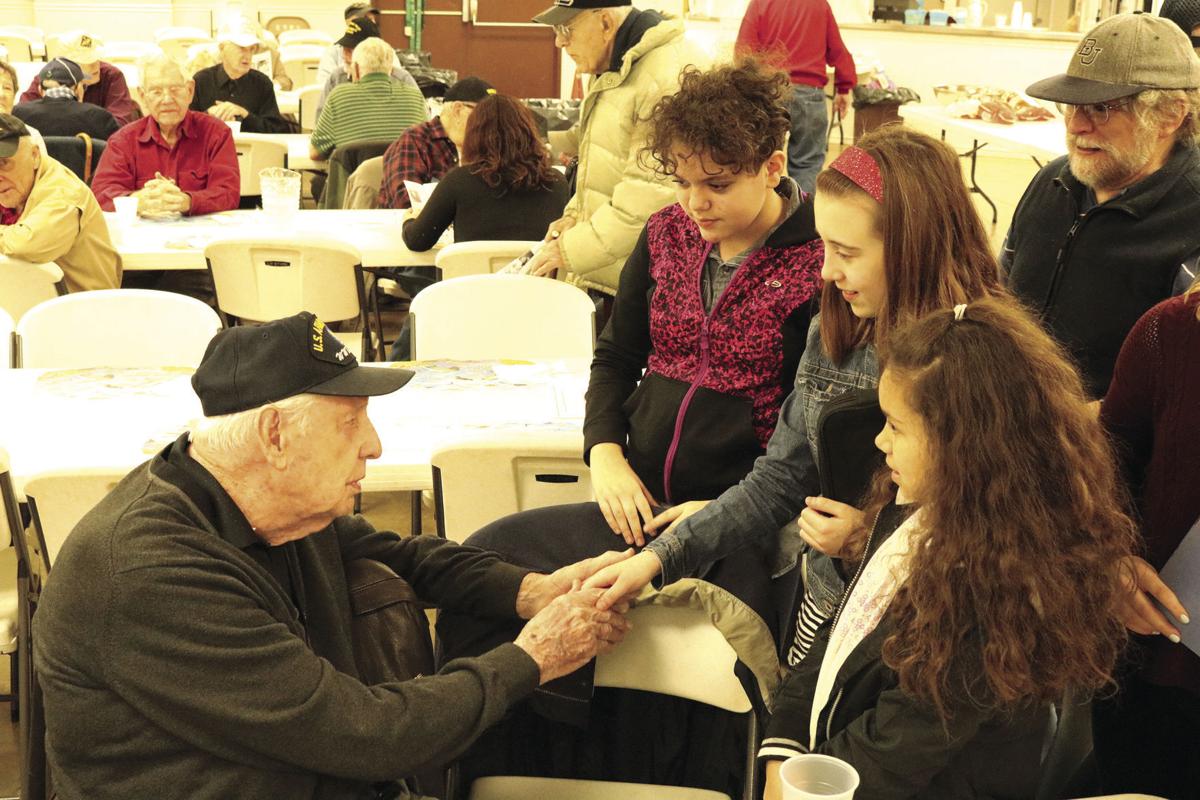 Joe Diblin speaks with a group of students from Central Columbia during a World War II luncheon near Bloomsburg. 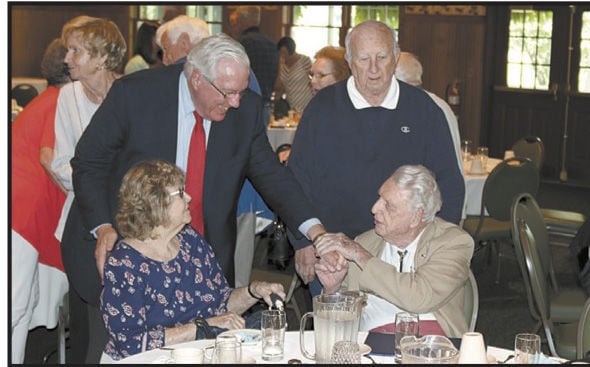 At his 100th birthday party celebration in 2017, Joe Diblin shakes hands with Graham Showalter. Seated is Nelle Fairchild Rote and behind Diblin is Mike Chervanik. 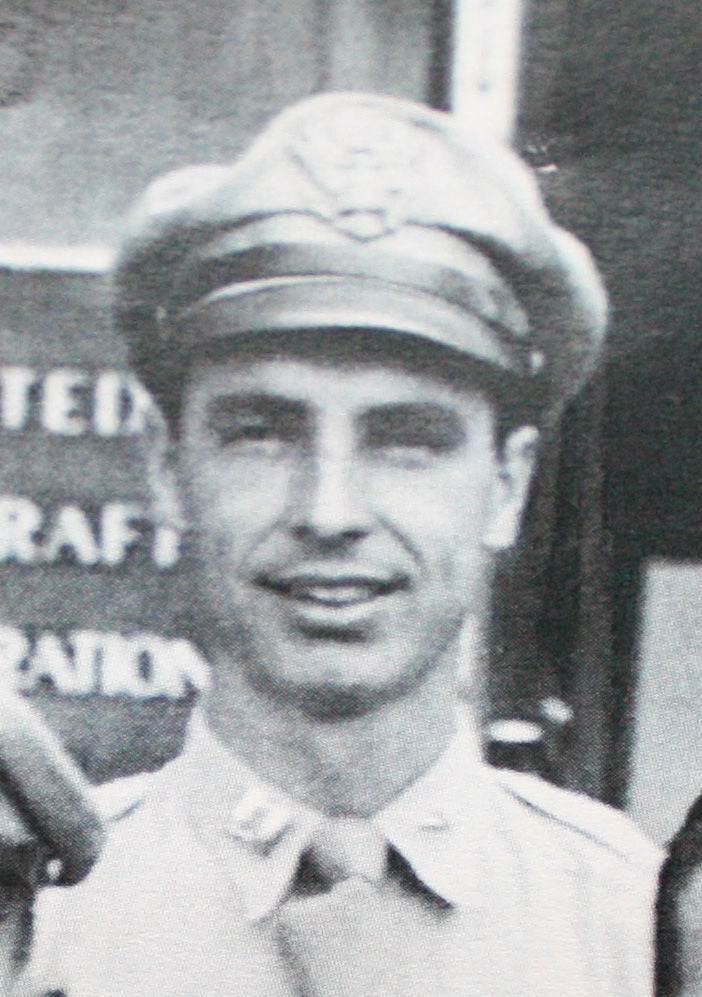 Joe Diblin during his time in the Army Air Corps.

Joe Diblin with a model of the bomber he loved so much — the B-24 Liberator.

Joe Diblin speaks with a group of students from Central Columbia during a World War II luncheon near Bloomsburg.

At his 100th birthday party celebration in 2017, Joe Diblin shakes hands with Graham Showalter. Seated is Nelle Fairchild Rote and behind Diblin is Mike Chervanik.

Joe Diblin during his time in the Army Air Corps.

NORTHUMBERLAND — The valley lost one of its true treasures this week. Joe Diblin, military officer, pilot, writer and friend to so many, died Thursday, Jan. 7. He was 103.

An accomplished collegiate athlete as well, Diblin shined in just about everything he attempted over the course of his long life. He will perhaps be most remembered for his tireless advocacy on behalf of local veterans.

Diblin penned a weekly column for decades in The Standard-Journal and more recently in the Daily Item. His mission, as he so often stated, was to ensure the voices of veterans were not forgotten.

“I think the good thing is we haven’t forgotten them — our veterans,” Diblin said ahead of his 98th birthday. “When you print their stories, you have a permanent record for the family and anyone else that’s interested.”

Himself a veteran of the Army Air Corps, the precursor to the Air Force, Diblin was charged with instructing young pilots on the newest American bomber at the time — the B-24 Liberator. The B-24 was designed to make longer bombing runs, which would become so crucial during the island-hopping campaign in The Pacific during World War II. He also served as an instructor on two-engine advanced aircraft.

It was Diblin and his crew which famously discovered a seemingly minor flaw in the design of the B-24, which despite the early issues, played such a crucial role in the Allied victory in Europe and the Pacific during World War II.

Diblin remembered the incident, which occurred in Smyrna, Tenn., as he was training pilots on the massive bomber.

"The B-24 had a very bad reputation at the time," said Diblin. "We were fortunate in the way it happened."

Bombers had exploded in flight, claiming entire crews, so salvaging information to assist in identifying the cause had eluded investigators. Diblin often recalled the day he found the cause of the problem on what had then become known as the "boom-boom bomber."

"The B-24 is a four-engine bomber, so no one can remember everything on it," he said. "There's a checklist. My crew chief was with me to assist and after we took off I sent him back to turn the hydraulics off in the back bay. He said there was smoke, so I dove straight down. The airstrip was in sight. I barely had the landing gear down when we touched down and skidded off the runway."

Diblin had already radioed down to have emergency personnel on scene. Once on the ground, he killed power to the engines having seen firsthand crew members killed by propellors while attempting to exit planes filled with thick, black smoke.

The fire was extinguished and crews were able to pinpoint the problem, an electrical auxiliary hydraulic pump had been placed too close to the main fuel line, which was fed by a rubber hose.

"So the line was re-routed and there were no more blow-ups," said Diblin. "We were the only survivors."

"Joe meant a great deal to the commmunity and to the veterans in the area," said Al Hess, a World War II veteran and long-time friend of Diblin's. "You know Joe was like an old-time Roy Rogers, he never meant anyone he didn't like. He was just fun to be around. He was well educated. He just provided time for us, anytime we needed it or wanted it."

Hess, who had known Diblin since his time teaching and coaching at Lewisburg High School, said students loved Diblin.

"Most everybody you come in contact with, you mention Joe Diblin's name and they knew him and admired him," said Hess. "We could always visit and have a wonderful time. It's too bad we weren't togehter for such a while before his death. It's pretty hard to talk about it now. He was just a great guy."

Diblin's ability to recall his military service, and stories in general, was legendary. He often told the story about he became one of the first pilots to fly through a hurricane.

The story detailed a long-range flight over the South Atlantic in 1945. The flashing lightening led Diblin to call the episode something like, "St. Elmo's Fire."

"Fire came through the cockpit," said Diblin. "I saw it coming and put my hood up."

Diblin got his crew through that unscathed as well, even as the ball of fire worked through each of the four engines.

Diblin flew over 102 different types of airplanes during his military and civilian career.

The aviator never lost his love for the art, and never shied away from discussing flying, aircraft and his experiences with both.

"As many scares as I've had in aviation, there's one thing about flying," he said. "If you love flying, the fact that you love it will get you through it."

Among his favorite stories, and most proud professional moments, Diblin quickly cited two flights for former presidents while he worked at Lycoming Aircraft Engines.

“Eisenhower — he had the Air Force purchase a plane to fly from Washington to his farm in Gettysburg. It was brought to Williamsport and I was authorized to fly it and deliver it back to Washington.

“With Johnson, he had purchased the airplane for his wife to fly to their ranch (in Texas). Not long after the purchase, they discovered the engines were running too hot. I was sent to Texas.”

Diblin discovered the issue and likely averted a tragedy as the plane had both engines replaced a day before Claudia “Lady Bird” Johnson and the couple’s daughter were to board the plane for a flight.

A long-time resident of Lewisburg, Diblin grew up in New Jersey and arrived in the area as a student at Bucknell University. There, he excelled at basketball, soccer and golf and in 1941 enlisted in the Army Air Corps, and was soon commissioned as a second lieutenant.

After the war, he returned to Lewisburg where he and his wife settled. He obtained a master's degree from Bucknell.

Throughout his time in the area, Diblin wrote about veterans and took part in veterans causes. He was long active with the Union County Veterans 4th of July Celebration, as well as the World War II luncheons held monthly near Bloomsburg.

"There will never be another man like Joe," said Carol Paul, a long-time organizer of the veterans luncheons.