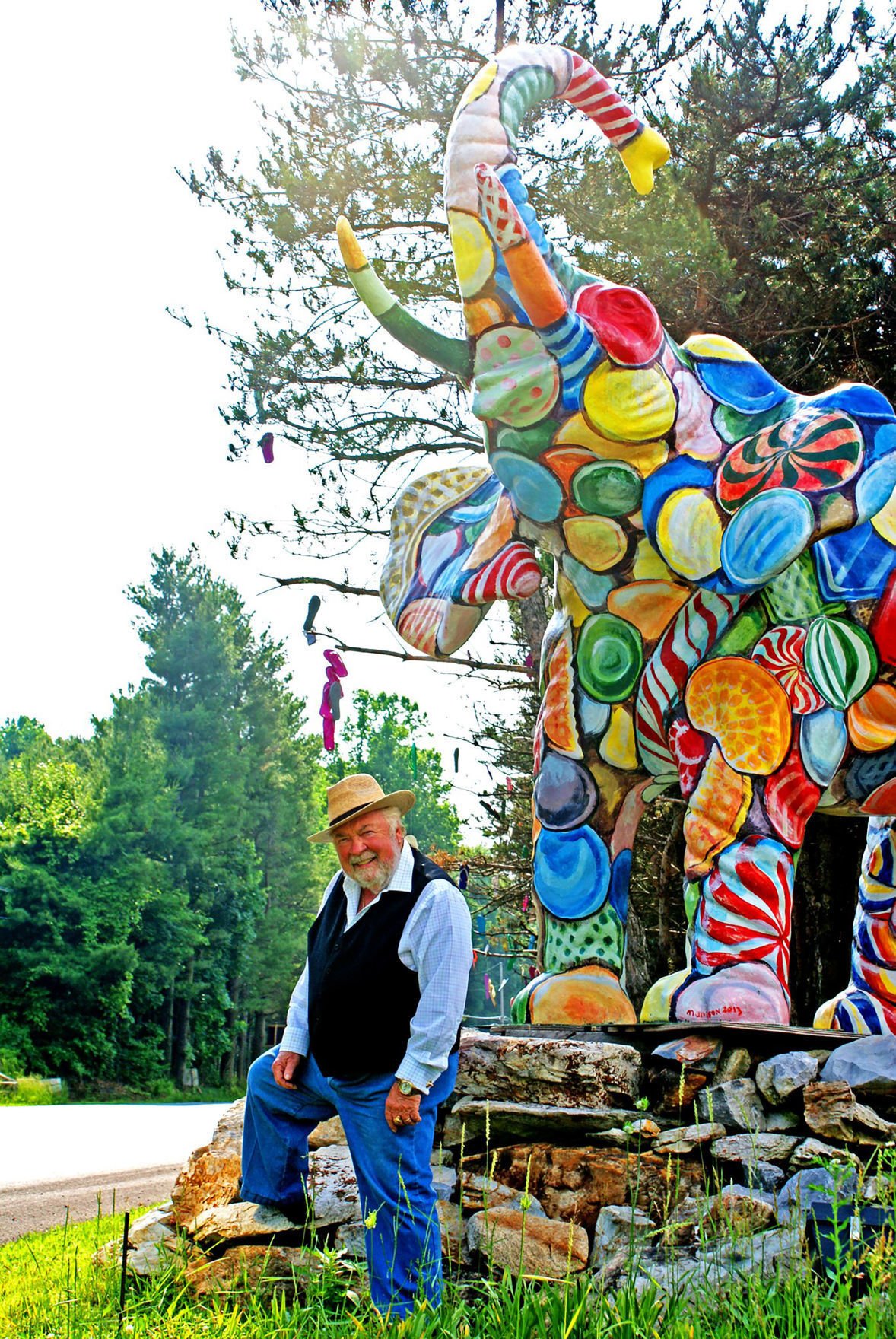 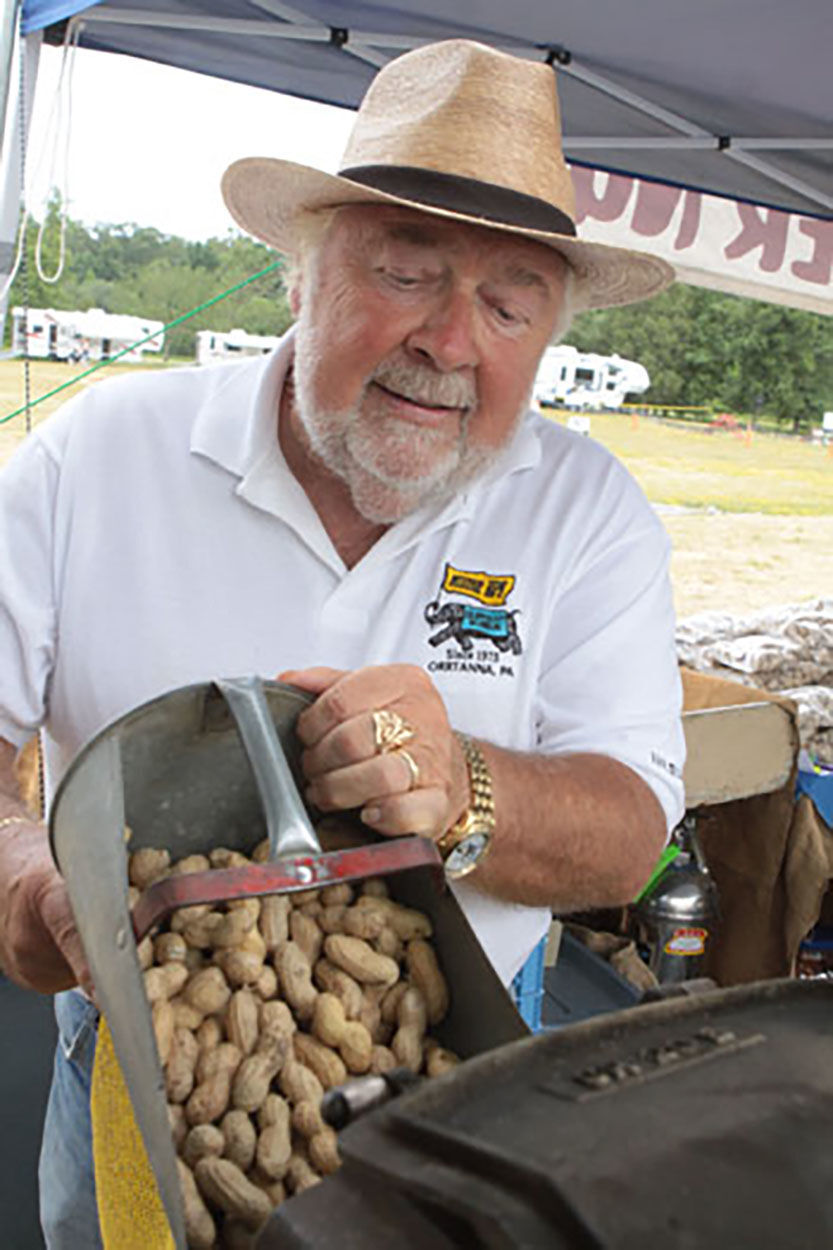 ‘Mister Ed’ Gotwalt dumps peanuts into a roaster during Gettysburg Bike Week in 2010, three days after his business was destroyed by fire. 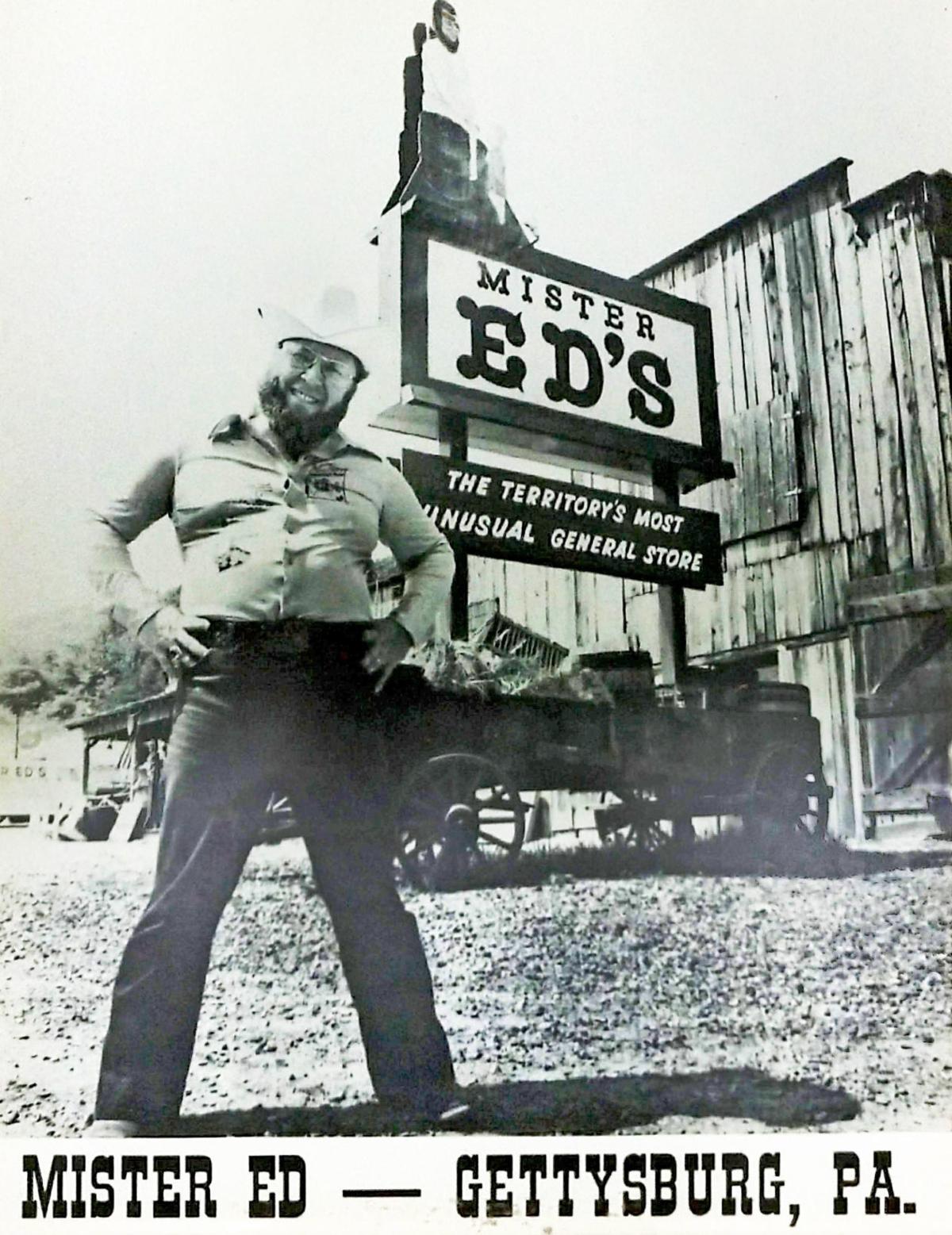 Ed ‘Mister Ed’ Gotwalt stands outside of the original Mister Ed’s on Chambersburg Road in this undated promotional shot. 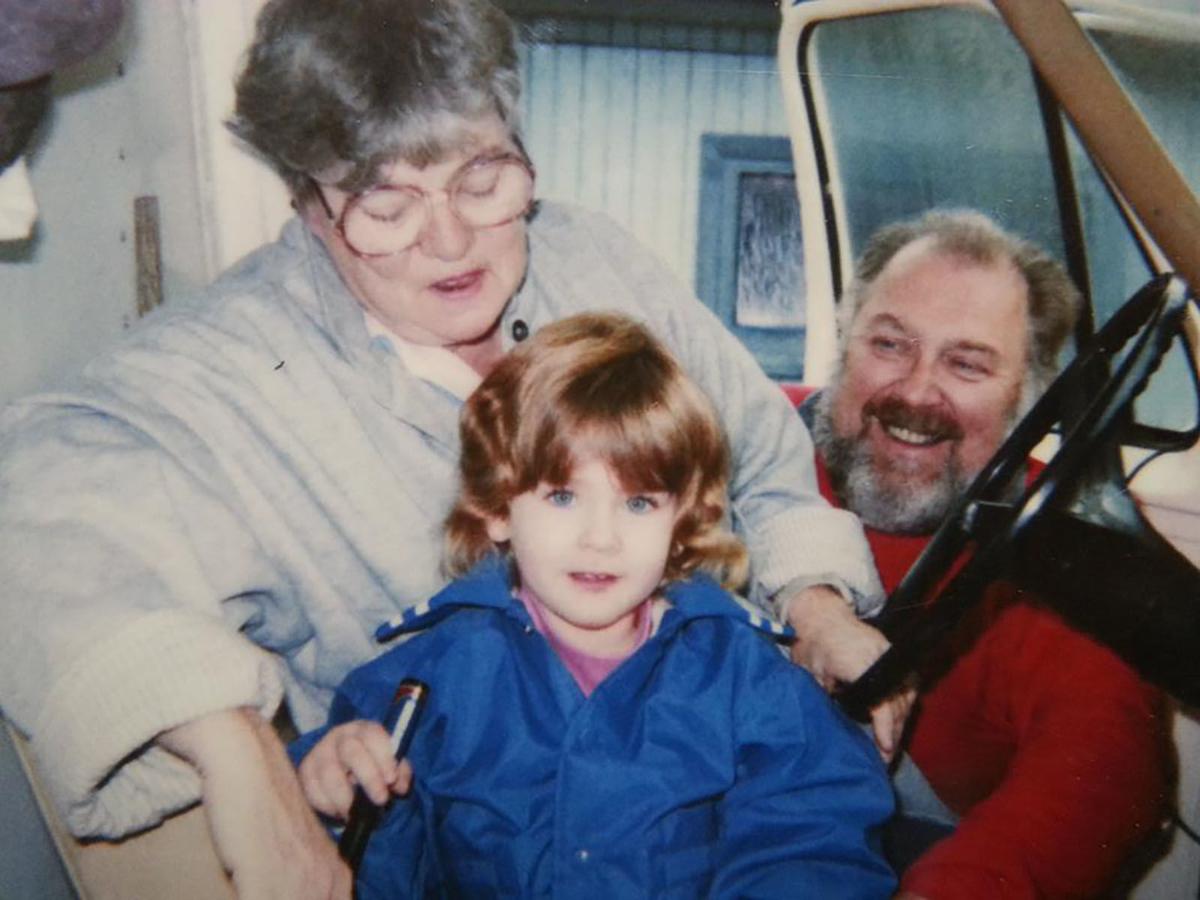 FAMILY — Pat and Ed Gotwalt are pictured with their granddaughter, Nicole Bucher, in 1989. Bucher and her husband Isaac are the current owners of Mister Ed’s Elephant Museum and Candy Emporium.

‘Mister Ed’ Gotwalt dumps peanuts into a roaster during Gettysburg Bike Week in 2010, three days after his business was destroyed by fire.

Ed ‘Mister Ed’ Gotwalt stands outside of the original Mister Ed’s on Chambersburg Road in this undated promotional shot.

FAMILY — Pat and Ed Gotwalt are pictured with their granddaughter, Nicole Bucher, in 1989. Bucher and her husband Isaac are the current owners of Mister Ed’s Elephant Museum and Candy Emporium.

Life was a smorgasboard for Ed Gotwalt.

He was an actor, businessman, friend, family man, traveler and eternal optimist.

Gotwalt, better known as Mister Ed, died Friday at the age of 84. Friends and family members who gathered Sunday via Zoom said Gotwalt had enough experiences for two lifetimes.

Gotwalt’s fame began on Feb. 26, 1975 when he and his wife, Pat, opened Mister Ed’s: The Area’s Most Unusual General Store in Orrtanna on their wedding anniversary. He died on the same date 46 years later.

“He was such a magnetic personality, everyone wanted to be part of what he was doing,” his granddaughter, Nicole Bucher, said.

To Nicole, he “was the world’s great grandpa” who not only embraced her childhood desire to take horseback riding lessons but became a fellow student.

Gotwalt also didn’t care what anyone else thought. Bucher admits she was embarrassed when her grandfather belted out showtunes on a New York City street and opened a window of a French hotel to sing “Don’t Cry for Me Argentina,” to passersby but those moments have transformed into fond memories.

Success was important to Gotwalt. Not just his success but the success of those he cared about.

Nicole and her husband, Isaac, purchased Mister Ed’s Elephant Museum and Candy Emporium when Gotwalt retired in 2014. Isaac remembers many people telling him and his wife, “this arrangement is going to take a lot of love and trust on both parts.” He said it was “a little intimidating” but seven years later he is thankful they took the leap.

“It was an incredible blessing to have a mentor for over six years,” Isaac said.

Gotwalt was a colorful character and every aspect of his life was just as bright. Friend Sue McMurtray met Gotwalt in 1976 when he announced he would stay awake for 76 hours to celebrate America’s bicentennial. Their friendship quickly evolved and the two hosted cast parties for Totem Pole Playhouse.

“The parties would get a full-page review in the (Hagerstown) Herald-Mail and sometimes the play would only get a quarter-page story,” McMurtray, Totem Pole’s current marketing manager, said.

Gotwalt was a magnet, friend and former employee Rick Beamer said. Beamer was 16 years old when Gotwalt hired him at his store. He never knew what to expect.

“One time, he somehow convinced me to put on a gorilla outfit and greet people in the parking lot,” Beamer said. “Life was a stage and Ed was always on it.”

Beamer currently manages The Dobbin House Restaurant in Gettysburg and passes lessons from Mister Ed on to his staff.

“The most important thing to him was taking care of the customer as soon as they walked in the door,” he said.

Adams County Commissioner Randy Phiel said one of Gotwalt’s greatest qualities was his optimism. Phiel was the president of the Gettysburg Anniversary Committee for 25 years and Gotwalt was always his food and beverage manager for the battle re-enactments.

The re-enactment’s success was always dependent on an uncontrollable factor, the weather, but Gotwalt helped keep spirits high during difficult years, Phiel said.

Gotwalt loved acting. He appeared in many Totem Pole Playhouse productions and recently told McMurtray he wanted to return this summer. Director John Putch, son of longtime Totem Pole Director Bill Putch, gave Gotwalt a role in his series of “Route 30” movies and “The Father and the Bear.”

“It was so fun to scheme with Ed and come up with ideas,” Putch said.

Fire destroyed Mister Ed’s Elephant Museum and Candy Emporium on July 5, 2010. Gotwalt was 74 years old and was not aware his granddaughter and her husband were interested in continuing his legacy. Instead of retiring, and without discussing it with anyone, he told the media he would rebuild.

“We’ve only just begun,” Gotwalt told the Gettysburg Times after the fire..

The fire led to a friendship with artist Michael Allison. Gotwalt hired Allison to paint a mural on a truck that sat on his property. The last day he was there, he met the famous Mister Ed.

“Immediately, he started crying,” Allison said. “He said ‘Icannot thank you enough. It looks like something is getting done.’”

Allison has created several other pieces of art displayed in the store, including a mosaic made from pieces of elephants damaged in the fire.

Gotwalt and his wife were seriously injured in a car accident on Jan. 29, 2017. He spent several days on life support and three months in recovery. When he was able to travel, he immediately reinvented himself. He created a presentation called “The 10 Commandments of Good Business” and donated speaker fees to local non-profit organizations.

Friends Roy and Doris Newman said Gotwalt always strived for more. Their relationship with Gotwalt began when Roy was hired to be the groundskeeper at Mister Ed’s. If Roy suggested planting 100 flowers, Gotwalt would say he wanted 200. Gotwalt also didn’t just want Roy to be his groundskeeper, he wanted him to be his friend. The Gotwalts and Newmans traveled together often and enjoyed many elaborate dinners.

“I never in my wildest dreams would imagine Ed and Pat would become our best friends,” Doris said.

All of Gotwalt’s friends remembered everything he experienced was “the best ever.”

“When someone has that kind of positive attitude, that kind of zest for life, it isn’t hard to create a friendship,” Phiel said.