The No. 9 locomotive, purchased from a July auction at ACF Industries in Milton, was delivered to the Walkersville Southern Railroad, where it will be used after being purchased by volunteer Jamie Haislip. 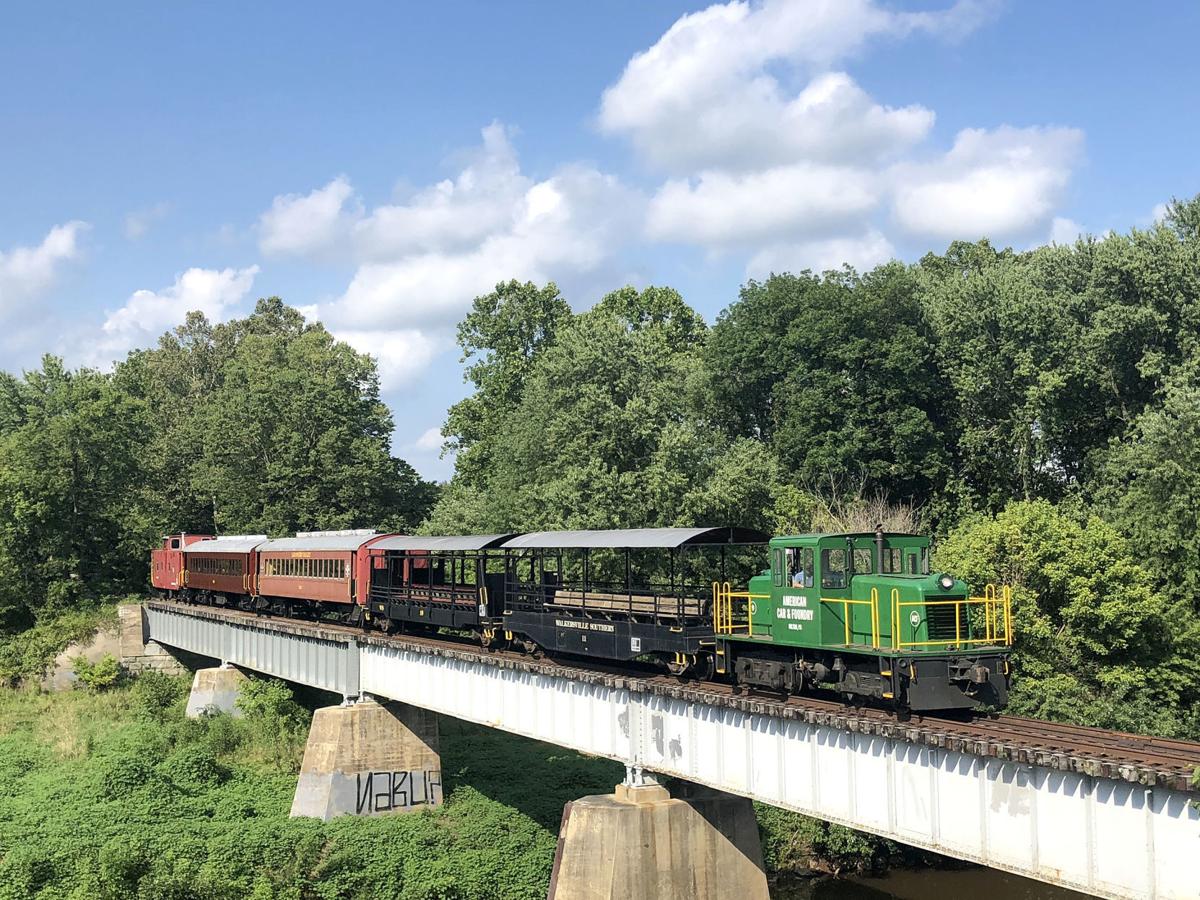 The diesel locomotive purchased by Jamie Haislip from an ACF Industries auction pulled railcars across the Monocacy River Bridge. The locomotive is being used by the Walkersville Southern Railroad. Haislip said the bridge was washed out during Hurricane Agnus in 1972 and rebuilt in 1995 for use by the railroad. 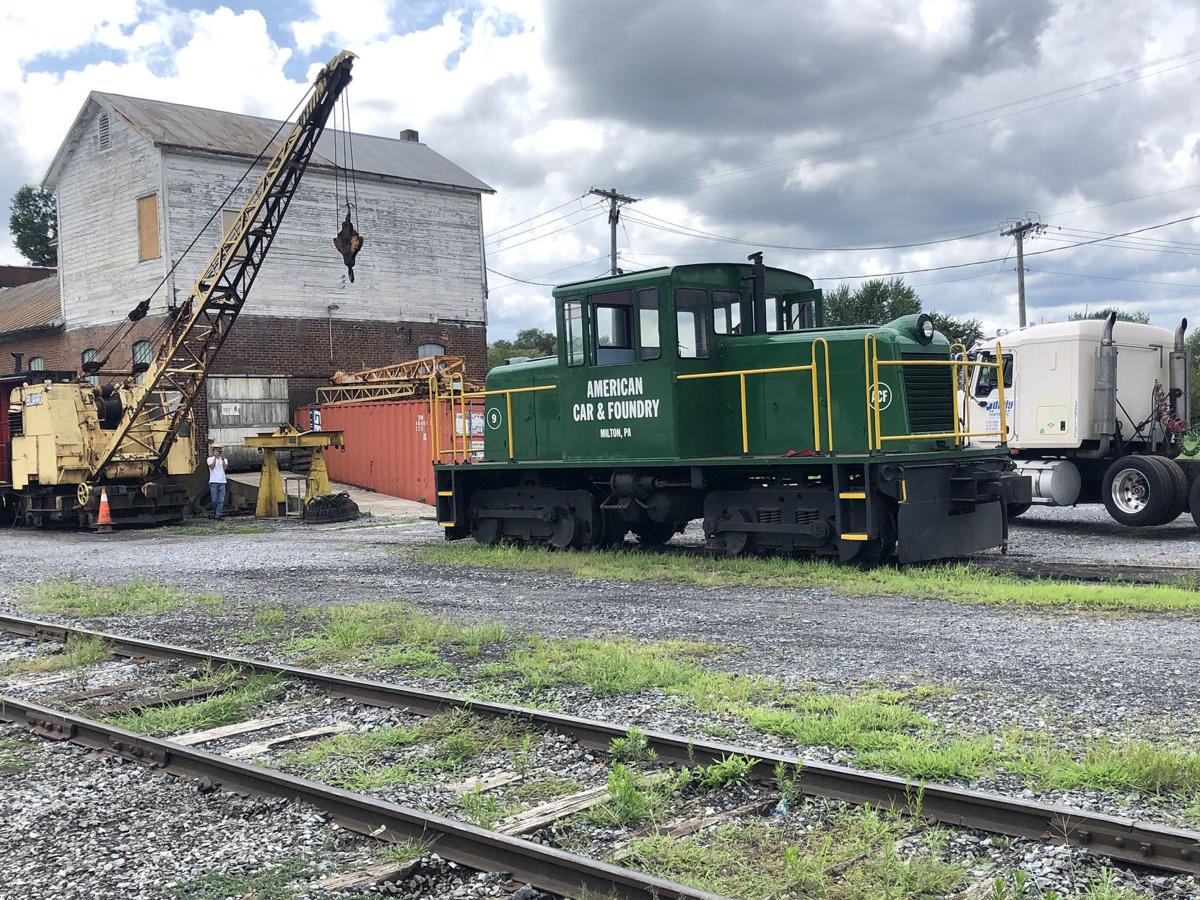 A locomotive which had been owned by ACF Industries will now be used by the Walkersville Southern Railroad in Maryland.

The No. 9 locomotive, purchased from a July auction at ACF Industries in Milton, was delivered to the Walkersville Southern Railroad, where it will be used after being purchased by volunteer Jamie Haislip.

The diesel locomotive purchased by Jamie Haislip from an ACF Industries auction pulled railcars across the Monocacy River Bridge. The locomotive is being used by the Walkersville Southern Railroad. Haislip said the bridge was washed out during Hurricane Agnus in 1972 and rebuilt in 1995 for use by the railroad.

A locomotive which had been owned by ACF Industries will now be used by the Walkersville Southern Railroad in Maryland.

WALKERSVILLE, Md. — One of three GE diesel locomotives which was used at a former Milton railcar manufacturing plant is now chugging along a scenic rail line in Maryland.

Jamie Haislip, a volunteer with the Walkersville Southern Railroad, said he purchased the diesel locomotive during a liquidation auction held at the now shuttered ACF Industries, Milton. The plant closed its doors at the end of 2019.

The engine will be used for passenger excursion train rides along the Maryland rail line.

Haislip said the all-volunteer historic railroad organization he is involved with was notified of the ACF auction months before it occurred in July.

“They sent me pictures and the No. 9 (locomotive), that’s what got my attention,” he said. “This unit looks like, essentially, it’s brand new. It had literally just been rebuilt prior to the plant closing down... It’s almost like it was brand new and never used.”

Haislip and other volunteers with the museum visited ACF to inspect the locomotive prior to the auction.

The No. 9 locomotive which Haislip ended up purchasing from ACF has a serial number just 28 away from the one already operated by the railroad.

“When we inspected them, the No. 9 really got our attention,” Haislip said. “We needed a locomotive that we could put in service right away. That fit the bill.”

He was able to test drive all three locomotives while visiting the ACF facility prior to the auction.

Haislip said the railroad was also interested in the other two locomotives, but they went to other bidders.

According to Haislip, one was purchased by Curry Rail Services in Holidaysburg and will be used to move railcars around its facility. The other was purchased by an excursion railroad in upstate New York that has not yet started operating.

In 2015, The Standard-Journal reported that ACF had just purchased the 45-ton diesel locomotive, which Haislip subsequently purchased in July. In the 2015 story, it was noted the locomotive was built in 1941 and used by the Navy during World War II.

In that article, ACF’s Bob Greenly said the locomotive was first used to switch railcars at a facility in Camden, N.J.

Harris Steel Company eventually took over that facility. In the 1970s, the locomotive was placed in a warehouse and not used for 35 years.

It was eventually acquired by McHugh Locomotive and Crane.

In May 2014, ACF contacted McHugh as the Milton-based railcar manufacturer was in search of a new locomotive.

“They are called little switches,” Greenly said of the locomotives. “They are different than what’s on the rails. They have to get in tight spaces. They’re perfect for something like this.”

According to Haislip, the other two locomotives which were auctioned had always been used at the Milton plant.

“Despite this locomotive being so old, it has very, very few miles on it,” Haislip said, of the No. 9. “It has the original wheel from 1942 and it has little to no wear, it’s just amazing.

Haislip said it took several weeks for volunteers to get the No. 9 engine running.

“It took quite a bit of work to get it working,” he said. “We were finding all kinds of bugs with it.”

According to Haislip, the Walkersville Southern Railroad has 10 locomotives.

“Two are in (the Walkersville Southern Railroad museum), most are in various forms of rebuilding,” Haislip said. “We have four that run regular service... They all have a special little niche that they’re good at. This locomotive (from Milton) will be very good at handling the larger Christmas train (rides).”

Seventy-five people are involved with the Walkersville Southern Railroad, all volunteers.

He offered assurance that the locomotive purchased from Milton will be put to good use.

“It’s going to stay in (the current) paint scheme until the paint runs out,” Haislip said. “We plan on using the locomotive on daily service... We offer trips. It’s mainly for kids, old railroad people or kids.”

He noted that the Walkersville railroad organization is digitizing all of the paperwork that came with the locomotive, including its blueprints.

Haislip said volunteers from Walkersville purchased other items through the ACF auction, including locomotive cleaners, rigging equipment and sandblasting tools.

“It’s so sad to see the plant go,” he said. “They had a lot of flat cars and they all got chopped up. They were from the 1930s. Excursion railroads love the flat cars. they build the outdoor deck (cars) on them.”

For more information on the Walkersville Southern Railroad, visit wsrr.org.