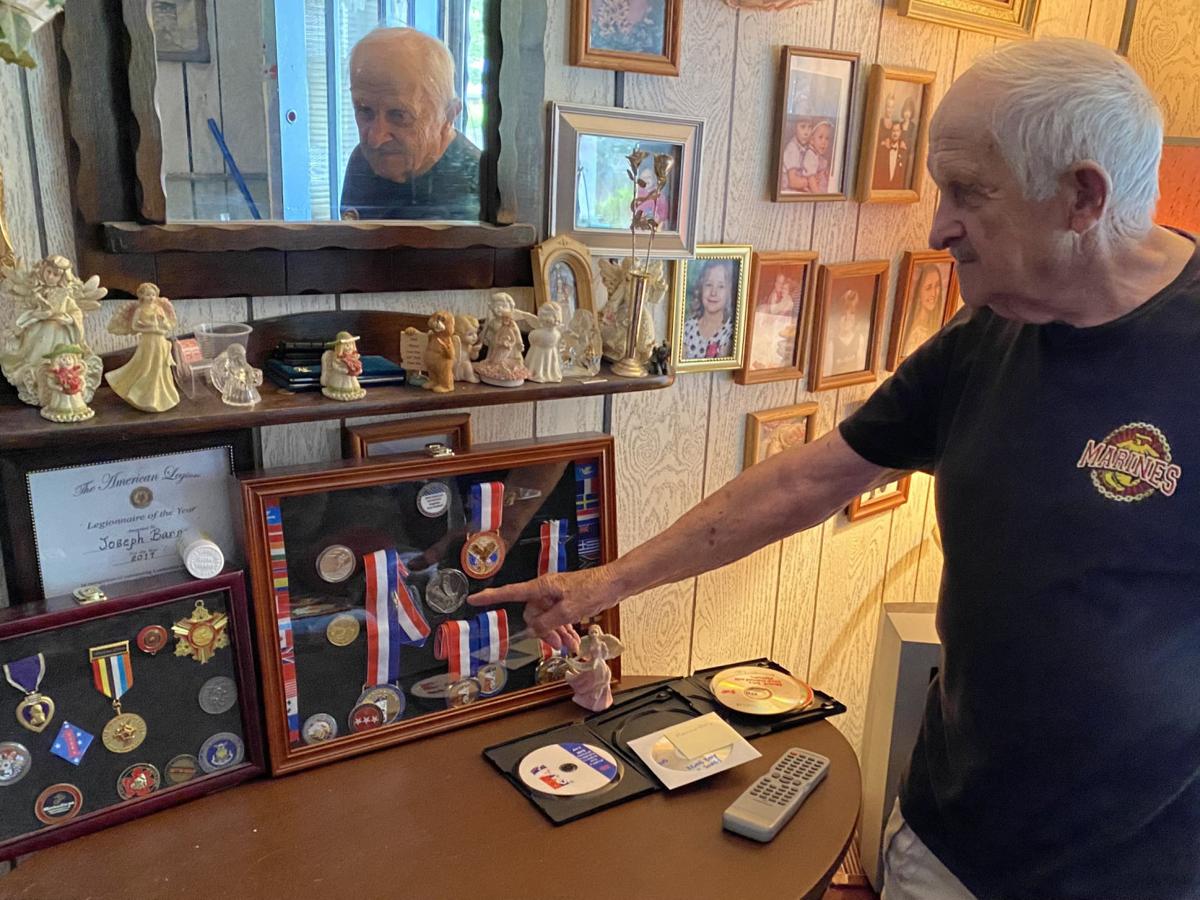 Joe Barna points to medals he received for his service with the Marines during the Korean War and for writing about veterans issues through the National Veterans Creative Arts Festival and the Department of Veterans Affairs. 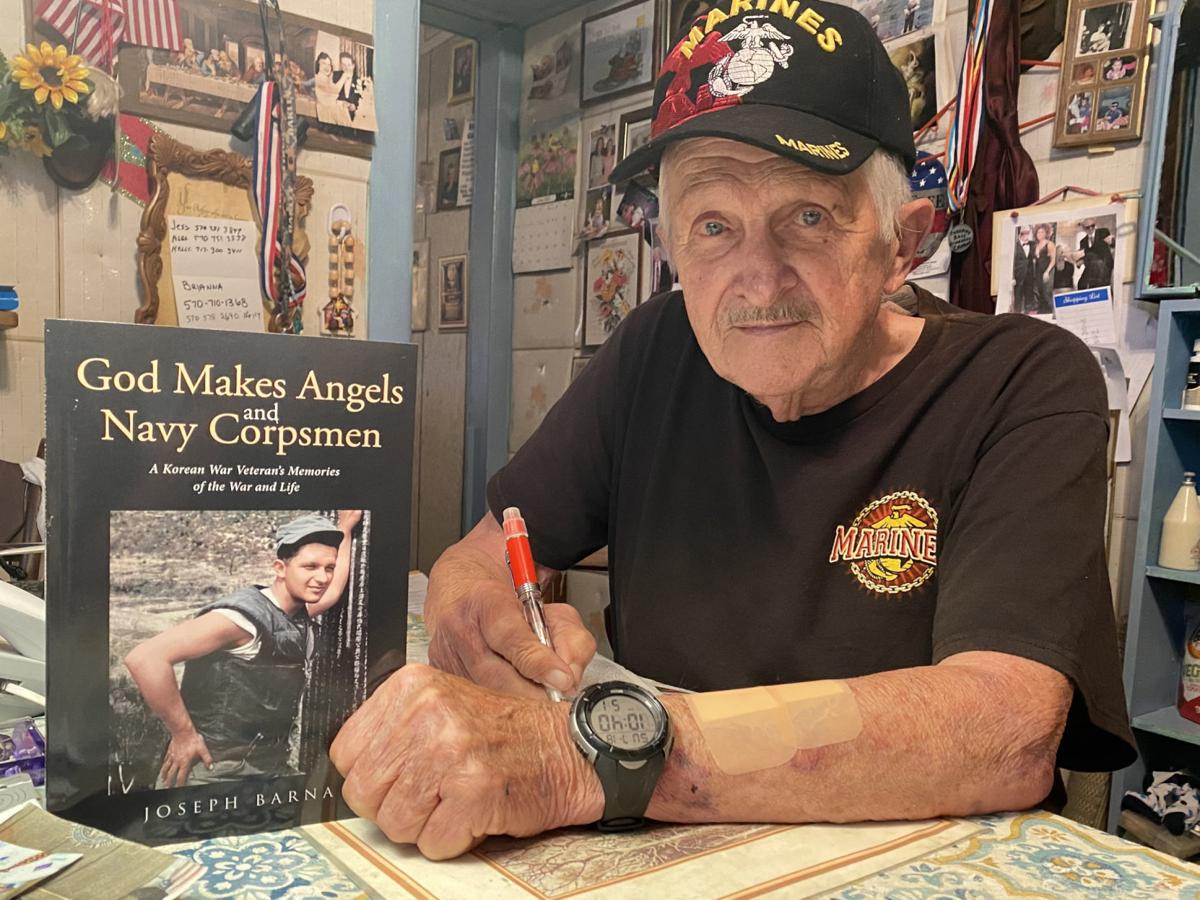 At 91 years old, Joseph Barna published his first book, ‘God Makes Angels and Navy Corpsmen: A Korean War Veteran’s Memories of the War and Life.’ Barna served with the Marines and lives in Freeland.

Joe Barna points to medals he received for his service with the Marines during the Korean War and for writing about veterans issues through the National Veterans Creative Arts Festival and the Department of Veterans Affairs.

At 91 years old, Joseph Barna published his first book, ‘God Makes Angels and Navy Corpsmen: A Korean War Veteran’s Memories of the War and Life.’ Barna served with the Marines and lives in Freeland.

To a wounded Marine, a Navy corpsman means surviving the battlefield.

The corpsman saves lives, sometimes at a cost of their own, wrote Joseph “Joe” Barna of Freeland in his book, “God Made Angels and Navy Corpsmen: A Korean War Veteran’s Memories of the War and Life,” which was published by Page Publishing this year.

“I would have died that night (if not for a Navy corpsman),” the Marine said bluntly from his kitchen table, surrounded by generations of family pictures. He points out a framed photograph of his beautiful bride of 67 years. It was a corpsman who allowed Barna to come home and start a family with the former Eleanor Wasielowski.

Though Barna hasn’t worn the uniform for some time, at 91 years old, his memories are still vivid and brought to life in his first book, which tallies 111 pages.

In it, Barna details how he scaled an intimidating mountain called Bunker Hill during the Korean War.

“I thought I was climbing to heaven, but I would find out I was going to hell,” he wrote.

His first battle came a few weeks after arriving in Korea in June 1952. War raged around him as he was knocked down by a shell. Barna, then a muscular 157 pounds, was pinned on his back to the ground, anchored down by the 68-pound flamethrower strapped to his back.

A North Korean soldier came at him with a bayonet, stabbing him in the upper left arm. Barna blasted him away with a double-barrel shotgun. And, while his most immediate enemy was no longer a threat, Barna’s deep wound was bleeding heavily, causing him to black out.

John E. Kilmer’s voice rose above the chaos surrounding him.

Kilmer, a Navy corpsman, rescued Barna, carrying him to a bunker, cleaning and sewing up the hole in his arm. Five weeks later, Kilmer was already wounded when he saved two more wounded Marines. Pierced by shrapnel, 21-year-old Kilmer turned himself into a human shield, protecting the Marines but dying in the process.

It’s a story that’s told to honor Barna’s combat angel, one he hopes inspires a greater respect for veterans. “That’s what I’m trying to do,” Barna said.

Three years after high school graduation, Barna was drafted into the Army. He was one of 66 people in a room in Wilkes-Barre, awaiting induction when a Marine walked in saying he wanted six volunteers to raise their hands and join the Marines.

Fear held back their arms, Barna said, so the Marine picked six of them from the fresh military files. Barna’s was the sixth name to be called out.

“I was scared,” Barna said. But, he’d go on to learn important lessons.

One of the first came at boot camp. Barna said he and 53 other guys were waiting on six barbers to give them all the same haircut. In the end, each of them had the same short cut and wore the same clothes. There was no division from race or ethnics, they were all the same.

They were all Marines.

His book highlights not only the military and the man who saved his life, but family, community baseball games and growing up in a small town. With his wife Eleanor’s passing in December, Barna also dedicated a portion of his book to her in the telling of their love story.

He’s not sure where his writing passion came from but won’t discount that it was gifted to him.

“The only writing I ever did was writing letters home from Korea,” Barna said of his younger years.

After Barna retired from PPL in the 1990s, he began writing, recalling a song he sang in the church choir in the 1980s. The lyrics referenced singing for those who cannot and offering help to those who need it.

“I speak for those who can’t speak,” he said.

Family, friends and family friend, Frank Balon of Freeland, encouraged Barna to write his stories. They also encouraged him to write the book.

In 2019, he received a top honor in the National Veterans Creative Arts Festival and the Department of Veterans Affairs creative arts competition for a piece he wrote entitled, “Tears.” In it, he details his experience in war and dealing with his emotions decades later.

He read the composition at the festival in Kalamazoo, Michigan, that year. He won two more high honors through the program in 2020 and says he’ll claim at least one more in 2021.

Barna also writes a monthly column for the local periodical, The Freeland Progress, so far penning 79 of them. And his work has appeared in national publications such as The American Legion Magazine. He also serves in the community honor guard.

The book is available on Amazon and Barna plans to host a book signing July 30 at the next concert in Freeland Public Park.