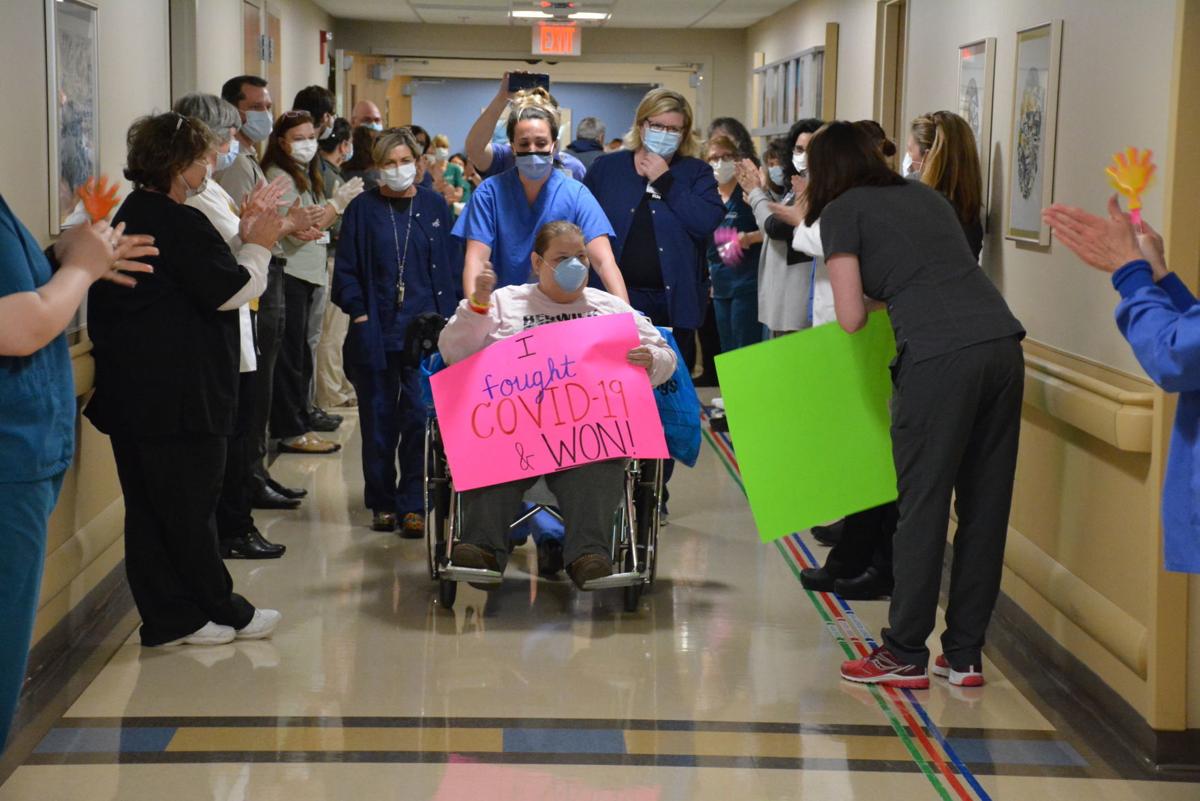 Staff at Evangelical Community Hospital, Lewisburg, cheered Debra Stoneroad, of Shamokin Dam, as she left the hospital in May following a fight with COVID-19. 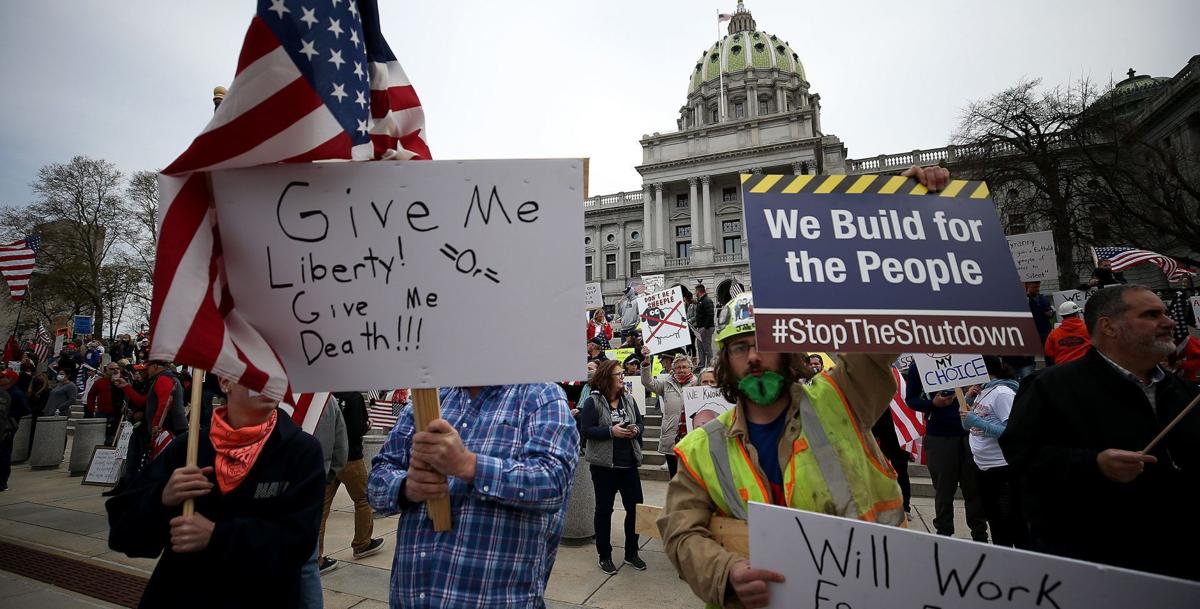 Staff at Evangelical Community Hospital, Lewisburg, cheered Debra Stoneroad, of Shamokin Dam, as she left the hospital in May following a fight with COVID-19.

Like the rest of the globe, Pennsylvania struggled mightily with a new virus that arrived suddenly and upended daily life, bringing sickness, suffering and death and widening political fault lines.

The coronavirus pandemic, of course, dominated statewide headlines in the annus horribilis that was 2020. But it was far from the only thing that grabbed attention.

Pennsylvania played a starring role in the presidential election, helping to deliver the White House to Joe Biden. And there were widespread racial injustice protests, accompanied by violent unrest, after the police killings of George Floyd in Minnesota and months later, Walter Wallace Jr. in Philadelphia.

A look back at the year’s top Pennsylvania stories — as if anybody could forget:

It came to Pennsylvania in late winter and, with stunning speed, began wrecking lives and livelihoods.

Democratic Gov. Tom Wolf announced the state’s first two cases of the coronavirus Friday, March 6. Wolf, like many governors of both political parties, took drastic measures to try to slow the spread of COVID-19, using his emergency powers to order people to stay at home, students to learn remotely, and businesses deemed “non-life-sustaining” to close. His health secretary became a familiar presence, ending her daily briefings with that “stay calm” mantra.

Easier said than done, with COVID-19 whipping up political and cultural storms.

Republican state lawmakers and many conservatives and business owners railed against the state’s pandemic restrictions, calling them excessive, inconsistent and unconstitutional. Why, they pointedly asked, were big-box stores allowed to remain open while many small businesses had to close? Wolf’s opponents mounted a series of legal challenges to his pandemic authority, but most of them went nowhere.

Meanwhile, the virus kept spreading — and exploded as the year drew to a close, putting hospitals under severe strain. “Nurses go home, cry in the shower, cry in the car alone because of the desperation and exhaustion they feel,” said Maureen Casey, a nurse in Hershey.

By the end of 2020, a virus that barely existed in humans a year earlier had infected more than a half-million people across Pennsylvania, killed more than 14,400, ravaged nursing homes and cost hundreds of thousands of Pennsylvanians their jobs. Wolf himself tested positive, though he did not show symptoms.

Amid all the bad news, a glimmer of hope: In mid-December, Pennsylvanians began rolling up their sleeves to get a newly approved vaccine.

Four years after Pennsylvania helped Republican Donald Trump score an upset over Hillary Clinton, the state, once again, played a critical role in deciding the next president.

A record-setting 6.9 million voters cast a ballot, and this time, they picked the Democrat — but the nation had to wait a while to find out as election officials counted more than 2.5 million mail-in votes.

Finally, four days after the election, The Associated Press and other news organizations determined that Joe Biden had won the presidency — and it was Pennsylvania that put him over the top.

Biden, the “scrappy kid from Scranton,” as former President Barack Obama called his No. 2, trounced Trump in Philadelphia and its suburbs to claim a statewide victory of more than 80,000 votes. Trump earlier had baselessly attacked the Democratic bastion as a cesspool of voter fraud, claiming from the debate stage that “bad things happen in Philadelphia.”

After the election, Trump and his campaign kept up their baseless claims of a rigged election and tried to get the results overturned in court. A series of state courts and Pennsylvania-based federal judges — and the U.S. Supreme Court — refused to go along.

“Voters, not lawyers, choose the president. Ballots, not briefs, decide elections,” wrote one judge. Another ridiculed Trump’s “speculative accusations.” Biden’s win in Pennsylvania was formalized by the state’s Electoral College, which met in Harrisburg and awarded him its 20 votes.

Floyd’s May 25 death while in Minneapolis police custody sparked global protests over police brutality and racial injustice, and thousands marched in communities throughout Pennsylvania — from Erie to Allentown, from Harrisburg to Scranton, in big cities and small towns — to demand change.

Most of the demonstrations were peaceful. Some turned violent.

In Philadelphia, police cars were set ablaze, windows were smashed, stores were ransacked and dozens of officers were hurt during nights of unrest. Police used tear gas and bean bags on protesters whom SWAT officers had trapped on a major highway at rush hour — prompting an apology from the mayor and new restrictions on the use of such munitions during protests — and at least three officers were charged with assault in separate incidents caught on video.

Violent protests and looting flared anew after Philadelphia police shot and killed Walter Wallace Jr., a 27-year-old Black man, on Oct. 26. His family had called 911 to seek help as Wallace went through a mental health crisis. Police said Wallace ignored commands to drop a knife when they fatally shot him within a minute of their arrival.

“The unjustified shooting of Walter Wallace Jr. ... has our city both raging and grieving, but also extraordinarily purposeful about taking action,” said Council Member Helen Gym.

In Philadelphia, the drive for racial justice led to a new civilian review commission and a formal ban on officers kneeling or sitting on a suspect’s neck; in Pittsburgh, a requirement that officers cooperate with that city’s civilian review board. Both cities are looking at more sweeping changes to make policing more equitable.

In Harrisburg, the Legislature approved a bill designed to make it harder for bad cops to hopscotch from one department to the next. Another new state law requires police to undergo training on cultural sensitivity and deescalation techniques.

“This is a first step, but we should not leave this chamber thinking we have fixed the issues that still exist in policing,” said state Rep. Malcolm Kenyatta, D-Philadelphia, who took to the House floor to recount his own traumatic experience with city police. “This is an important step, but there is still so much more that we need to do.”

In January, a tour bus crash on the Pennsylvania Turnpike near Pittsburgh killed five people and injured dozens. The loaded bus was on its way from New York City to Cincinnati when the driver lost control in light snow, causing a pileup. .... The state Supreme Court heard arguments on whether Bill Cosby’s 2018 sexual assault conviction should be overturned. The court has yet to rule.