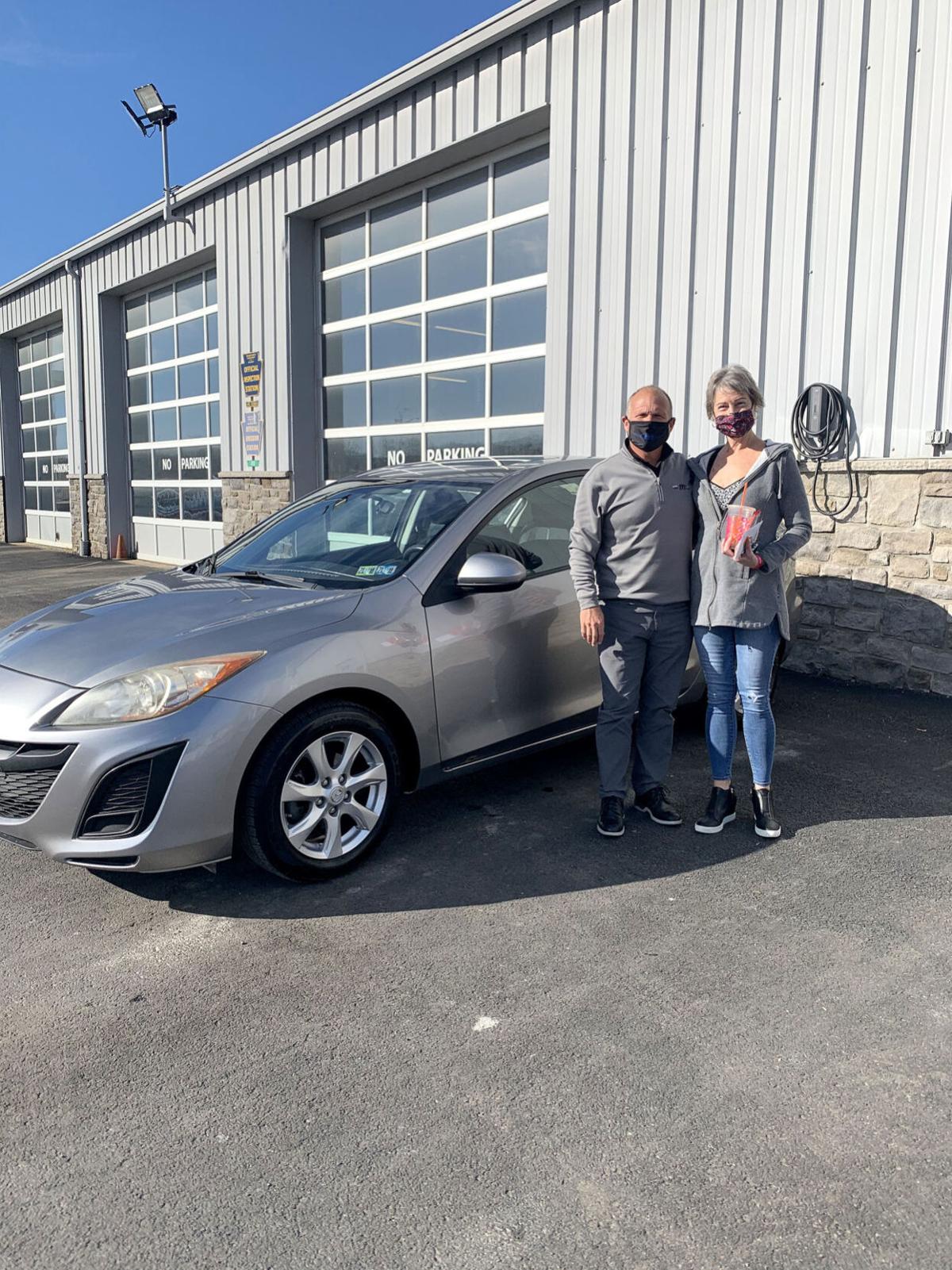 Brian Peace and Lisa Polcyn, with the 2010 Mazda his dealership gifted to her. 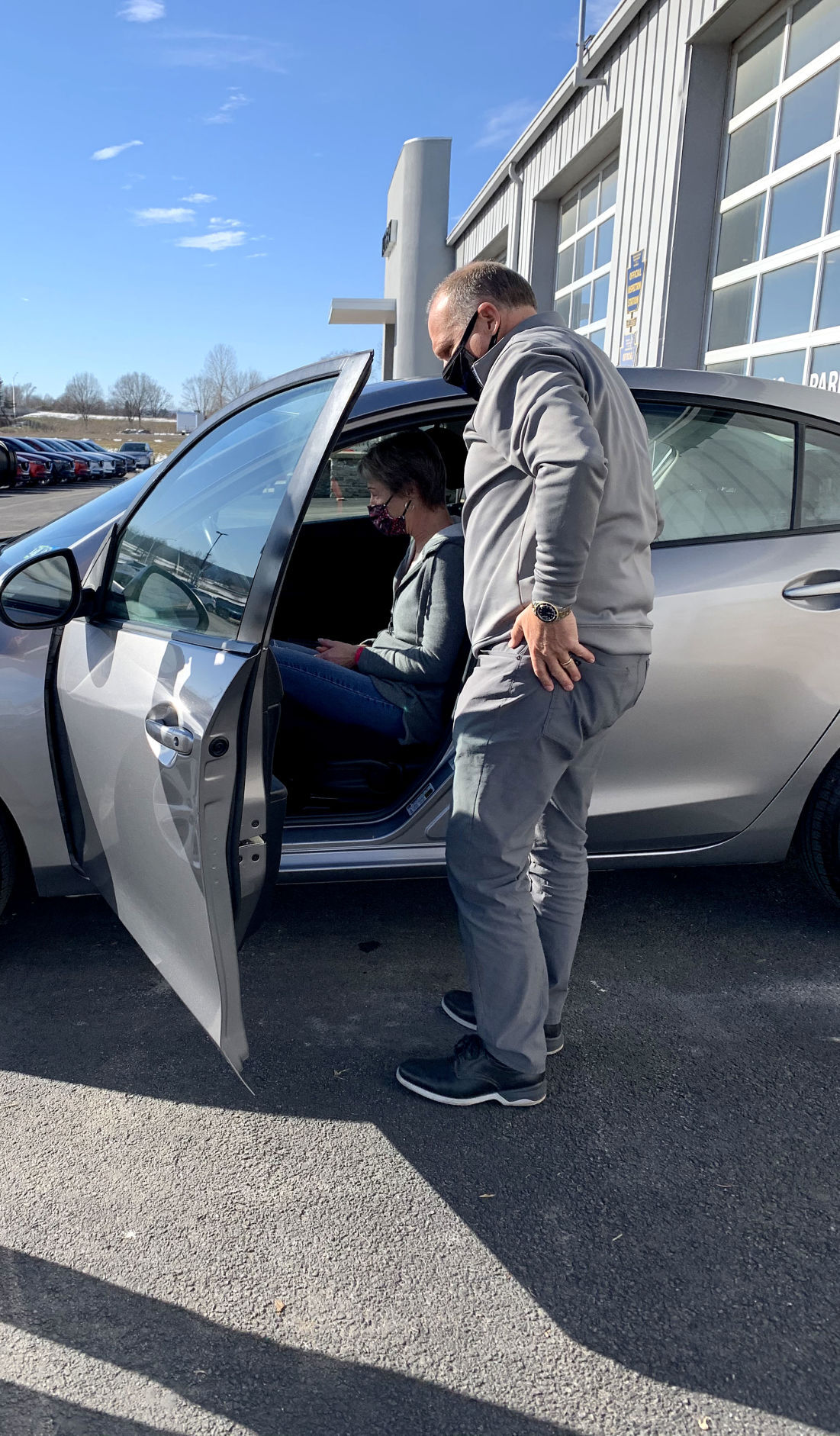 Brian Peace looks on as Lisa Polcyn sits behind the wheel of a 2010 Mazda his dealership gifted to her.

Brian Peace and Lisa Polcyn, with the 2010 Mazda his dealership gifted to her.

Brian Peace looks on as Lisa Polcyn sits behind the wheel of a 2010 Mazda his dealership gifted to her.

WATSONTOWN — Tears were flowing Saturday morning at Murray Motors in Hughesville as a weight was lifted from the shoulders of a single-mother from Watsontown who has been battling breast cancer.

Lisa Polcyn, 53, was diagnosed with breast cancer one year ago.

“It’s been an ongoing battle,” Polcyn said. “I’m still doing some treatment and going through some things, but that’s what I do.”

At the time of her diagnosis, Polcyn said she was not working. She remains unemployed with two sons, Tanner and Landon Polcyn, ages 15 and 12.

“Coming from a small town, the amount of support that I have gotten... through my journey, and that I continue to get, has been unbelievable,” she said. “The type of cancer that I have and that I’m dealing with, I think will be OK. I’m just not sure for how long.”

Polcyn has metastatic breast cancer, and has undergone surgery, as well as radiation and chemotherapy.

In addition to fighting breast cancer and being unemployed, Polcyn has had other hardships.

“The vehicle that I have is 13 years old,” she explained. “For the last several years, it’s been having some major repairs needed to it. It got to the point were, as a single mom and I’m not working... it’s been very difficult for me to keep getting it fixed.”

Polcyn said she’s known Brian Peace, the managing partner at Murray Motors, since the two went to high school together in Montoursville.

“I had contacted him, knowing he was in the car business, to ask what my options were,” Polcyn recounted. “Is my car worth anything? I can’t put any more money into it.”

“Cancer runs deep in my family,” Peace said. “I lost my mom to cancer.”

“Lisa, I’ve been following her on Facebook,” Peace said. “She’s a very humble person. She’s raising two kids... I thought about it and thought about it, for three or four weeks.”

He also noted that his brother, Brad, is a Warrior Run High School teacher and has one of Polcyn’s sons in school.

On Friday, Polcyn received a call from Peace asking if she could find a ride to his dealership in Hughesville.

“I had no idea they were going to give me a car,” an emotional Polcyn said. “There’s no words to describe it. I think I’m still in shock.

“It’s truly humbling to me that there is good in this world, with everything that’s going on,” she continued. “For them to do that for me, knowing the need that I had and my health circumstances, it’s utterly amazing.”

Peace was “choked up” even prior to Polcyn’s arrival at the dealership Saturday morning.

“I was just in tears and trying to hold every thing back I could,” he said. “It’s a great feeling to be able to give something like that.”

Peace is hopeful that Polcyn will be able to beat cancer.