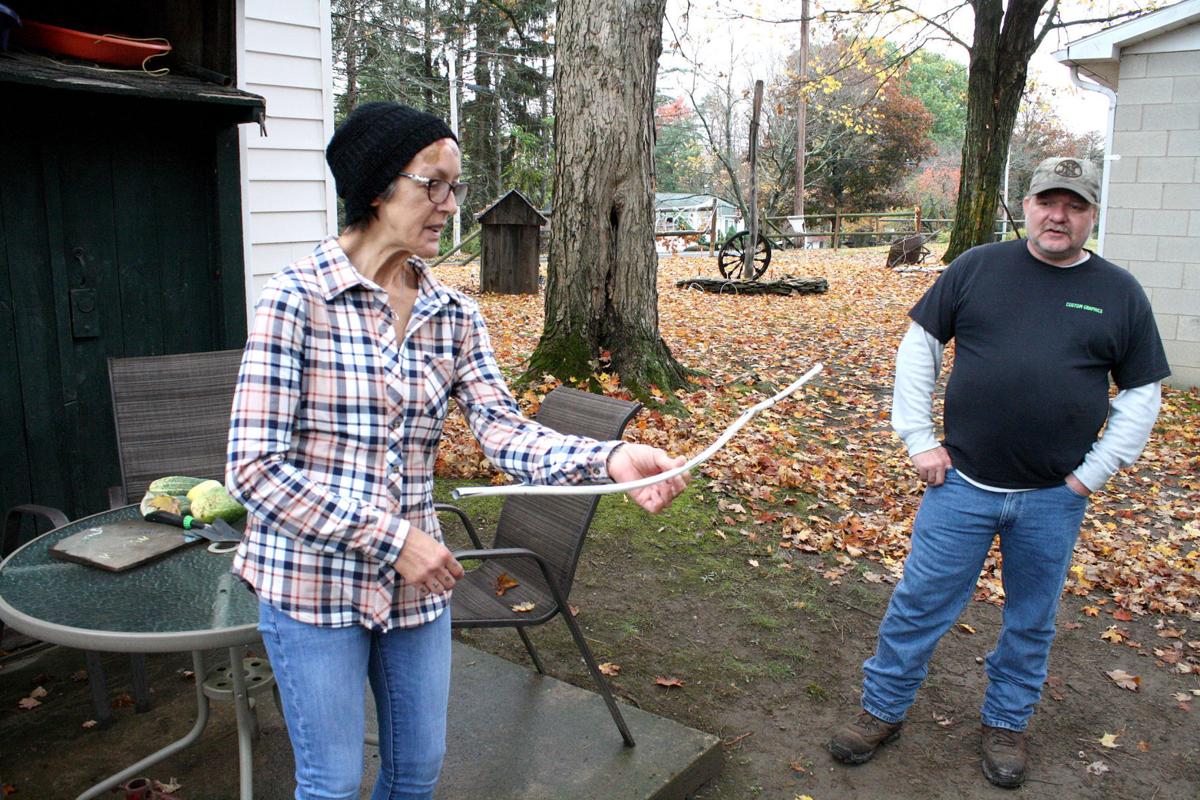 Melinda LeBarron, of Muncy Creek Township, showed the curtain rod used Saturday night to fight off a 250-pound bear at the back door. Sid LeBarron looked on. 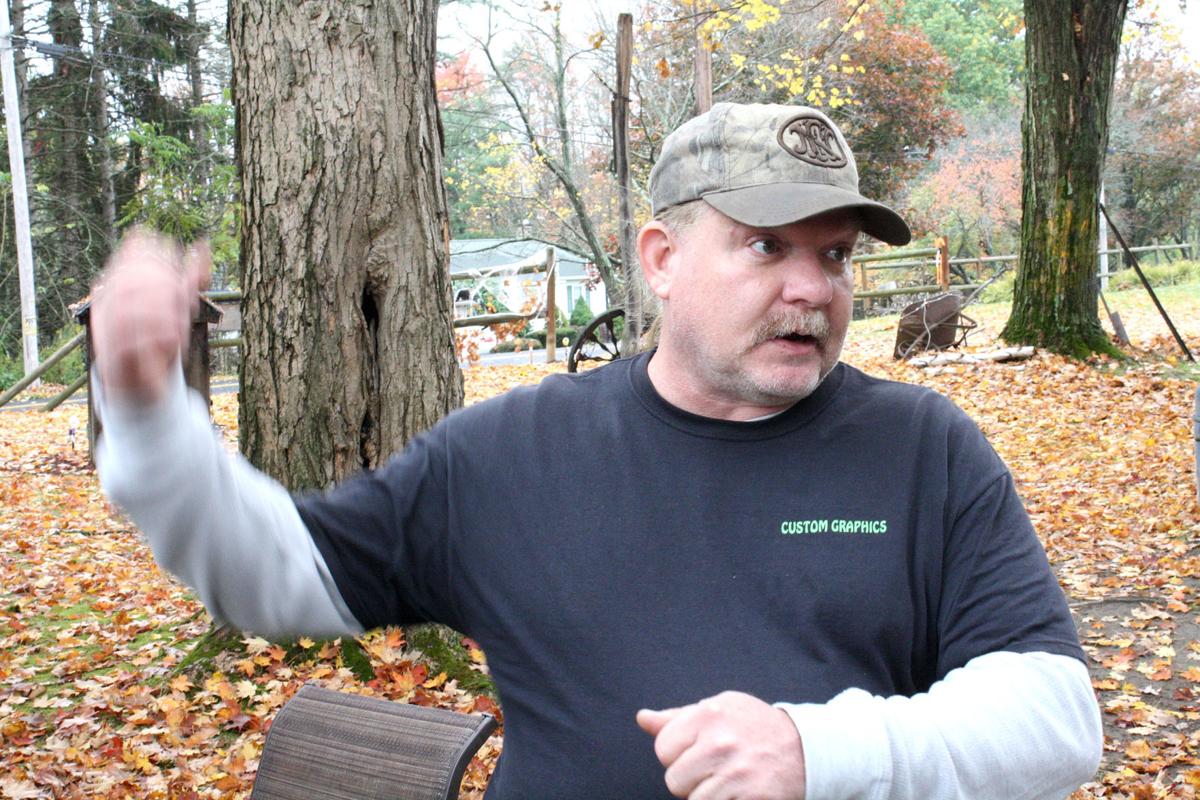 Sid LeBarron, of Muncy Creek Township, said it was the second time in less than two years that he has come to the aid of his wife during an encounter with a bear on their property. 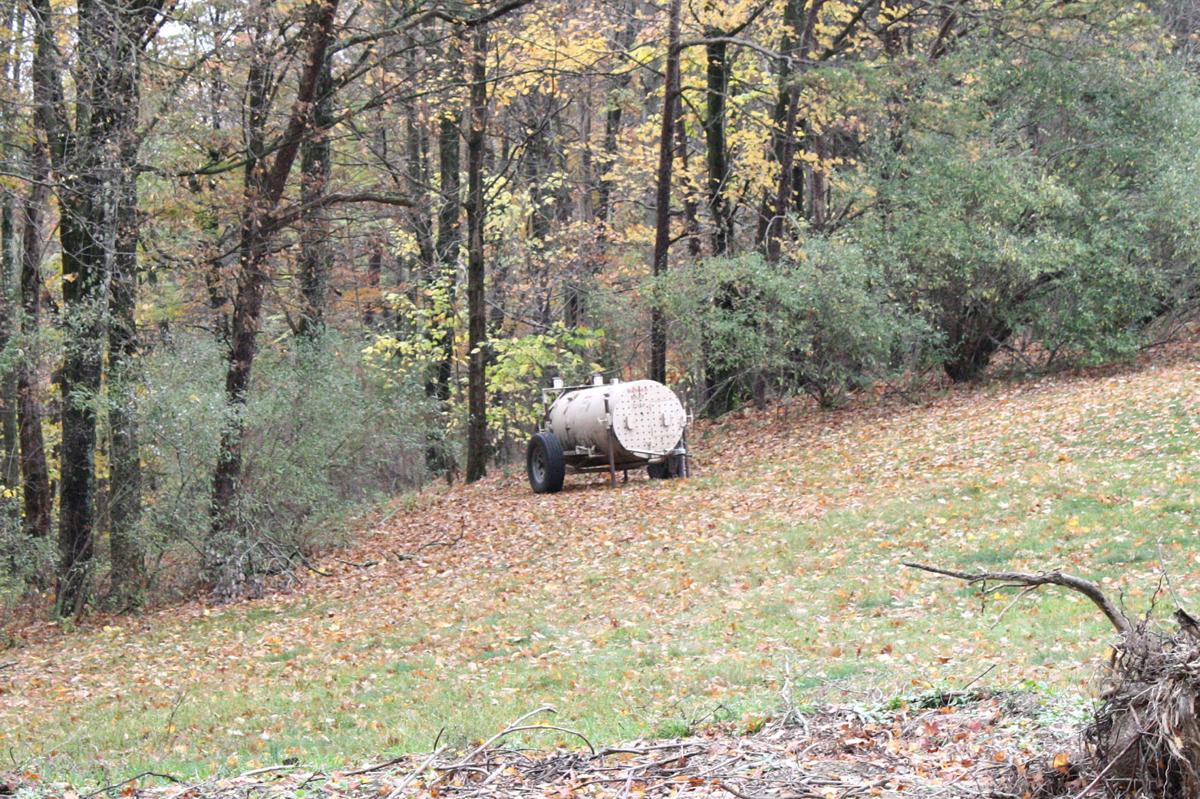 Pennsylvania Game Commission officials put a trap on a property next to the home of Melinda and Sid LeBarron, of Muncy Creek Township, after the second encounter with a bear in two years.

Melinda LeBarron, of Muncy Creek Township, showed the curtain rod used Saturday night to fight off a 250-pound bear at the back door. Sid LeBarron looked on.

Sid LeBarron, of Muncy Creek Township, said it was the second time in less than two years that he has come to the aid of his wife during an encounter with a bear on their property.

Pennsylvania Game Commission officials put a trap on a property next to the home of Melinda and Sid LeBarron, of Muncy Creek Township, after the second encounter with a bear in two years.

MUNCY CREEK TOWNSHIP — A household pet in the Muncy area died Saturday after again challenging a bear near the home of its family.

“Bear,” a chihuahua-pekinese mix, responded to an actual bear on the property of Melinda and Sid LeBarron of Muncy Creek Township, Lycoming County.

The dog encountered a bear under similar conditions 22 months ago.

The pet was called a “hero” at the time, though Melinda spent more than two months in a hospital recovering from injuries sustained trying to retrieve the little dog. They included fractures, lacerations and removal of part of a finger.

It all seemed to happen again at about 10 p.m. Saturday. Melinda said it was routine to let the dog out for a time in the evening, but “Bear” scented something in the yard this time.

“She started acting up, barking and carrying on and doing her hopping down through the yard,” Melinda said. “I knew something was down there, so I started screaming after her.”

Sid came running after hearing Melinda holler, knowing the dog was likely to run off or chase something. Melinda then saw something move about 30 feet from the house and experienced a wave of disbelief.

“Uh-oh, here we go,” she recalled. “(The bear) came out enough and at about that time (Sid) was already at the door, thank goodness.”

Melinda and Sid saw the bear chase the dog toward the house as they screamed at the top of their lungs.

“That bear was going full force,” said Melinda, as she pointed toward where the bear caught the dog. “That’s when I seen her grab ‘Bear’ and she put her up on that top step.”

Sid attempted to fend off the bear with a curtain rod as it apparently tried to enter the house. He estimated its weight at around 250 pounds.

“I watched him,” Melinda added. “(Sid) was just wailing away on that bear at the top step, trying to get her to stop. But we already knew it was probably too late to save ‘Bear.’”

The bear left, dragging the dog across nearby Peach Orchard Road and into woods. Her remains, which will be cremated, were found about 250 yards away from the house.

Melinda and Sid said they were extra careful to follow Pennsylvania Game Commission guidelines after the Dec. 12, 2018, encounter. The guidelines included covering up feed for their ducks and chickens, making sure garbage was not reachable and other precautions.

They also suspect the bear that killed their pet was the same bear which came to their property nearly two years ago.

“I’m sorry,” Melinda noted. “The second time around happening, there is something wrong with that bear.”

“We’re leaning towards it not being the same bear,” Steingraber said. “That is because of the bear (in 2018) had cubs with it and was definitely a female. This bear was a single bear by itself, most likely a male.”

There was no way to know for sure if it was the same bear, Steingraber said, but the most recent bear did not have cubs with it.

Steingraber said it is truly rare for people to be attacked on the same property more than once. There is thus little data to refer to or which could point toward a pattern.

A PGC officer set a trap near the LeBarron property, similar to one set nearly two years ago. Steingraber was hopeful that ear tags could be put on a bear if one was caught.

“There is definitely a healthy bear population around there,” he added. “If something like this happens again, with the ear tags we may be able to identify specific bears. But just by looking at it, unless it has some sort of strange identifying feature, it would be almost impossible to identify a specific bear without having tags.”

A bear was caught after the previous attack, but Steingraber said if it was the same bear it may never be known.

Steingraber added that if a person is in a situation where could articulate that their life was threatened, they have a right to defend themselves. But more evidence would be needed before the PGC would euthanize a bear.

“If we had a bear that attacked a person and we could identify it as that particular bear, we might consider euthanasia in that instance,” Steingraber said. “But we would have to be certain and that would be difficult to do. We’re not just going to start euthanizing all bears we see because of one situation.”

Steingraber added that it was rare for bears to not flee when a person makes a loud noise. He also dispelled the notion of “rogue” bears acting independently.