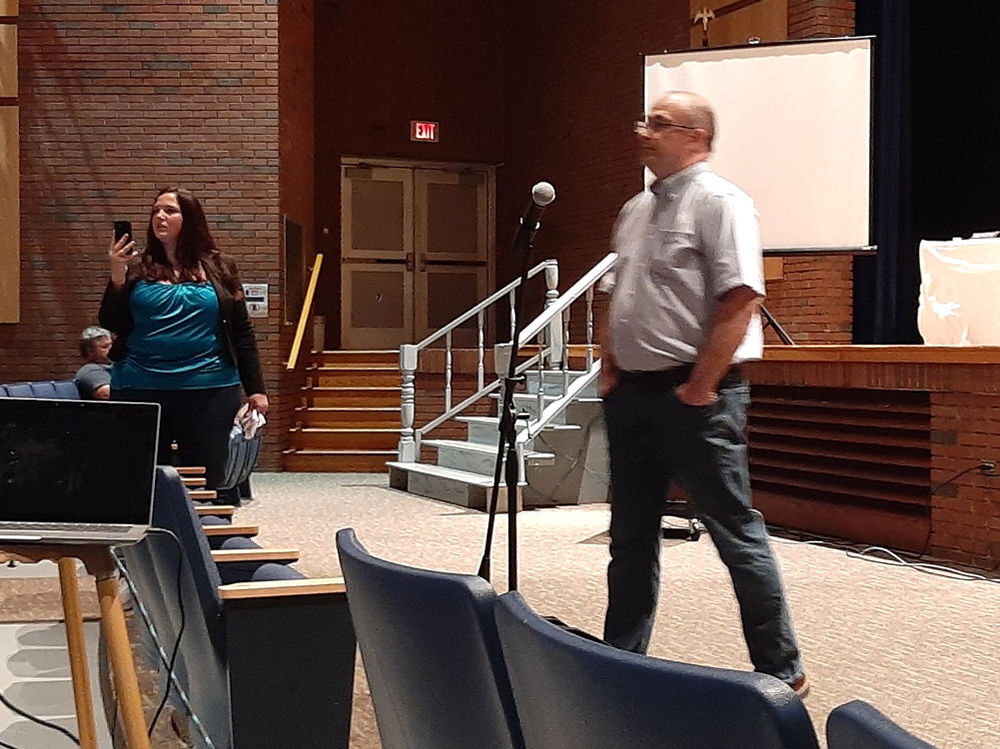 Billy Allred of Union Township says citizens who wanted to address Mifflinburg school directors should do so anyway and be recorded for Facebook. 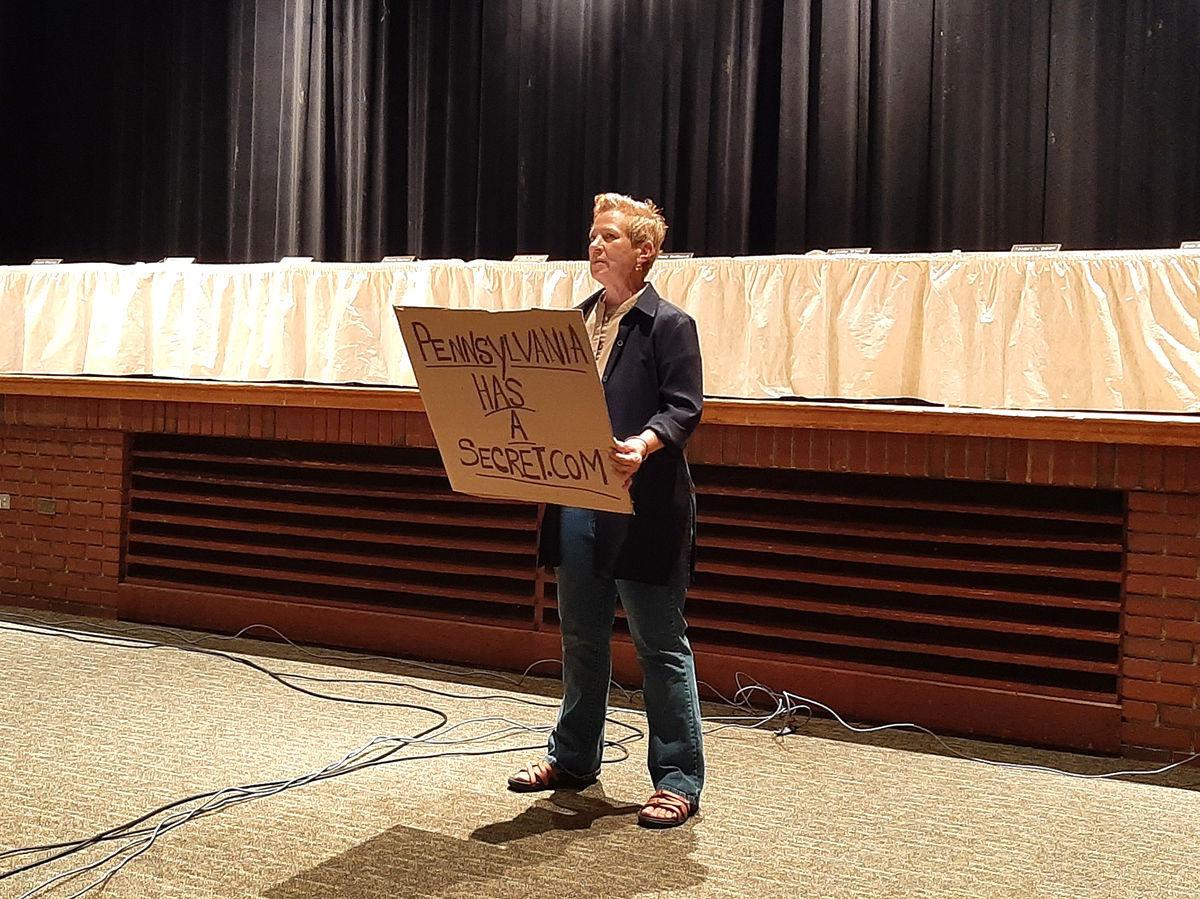 Katherine Yoder, speaking at an impromptu gathering at Mifflinburg Area High School, compared the effect of a child’s wearing a facial covering to child abuse. 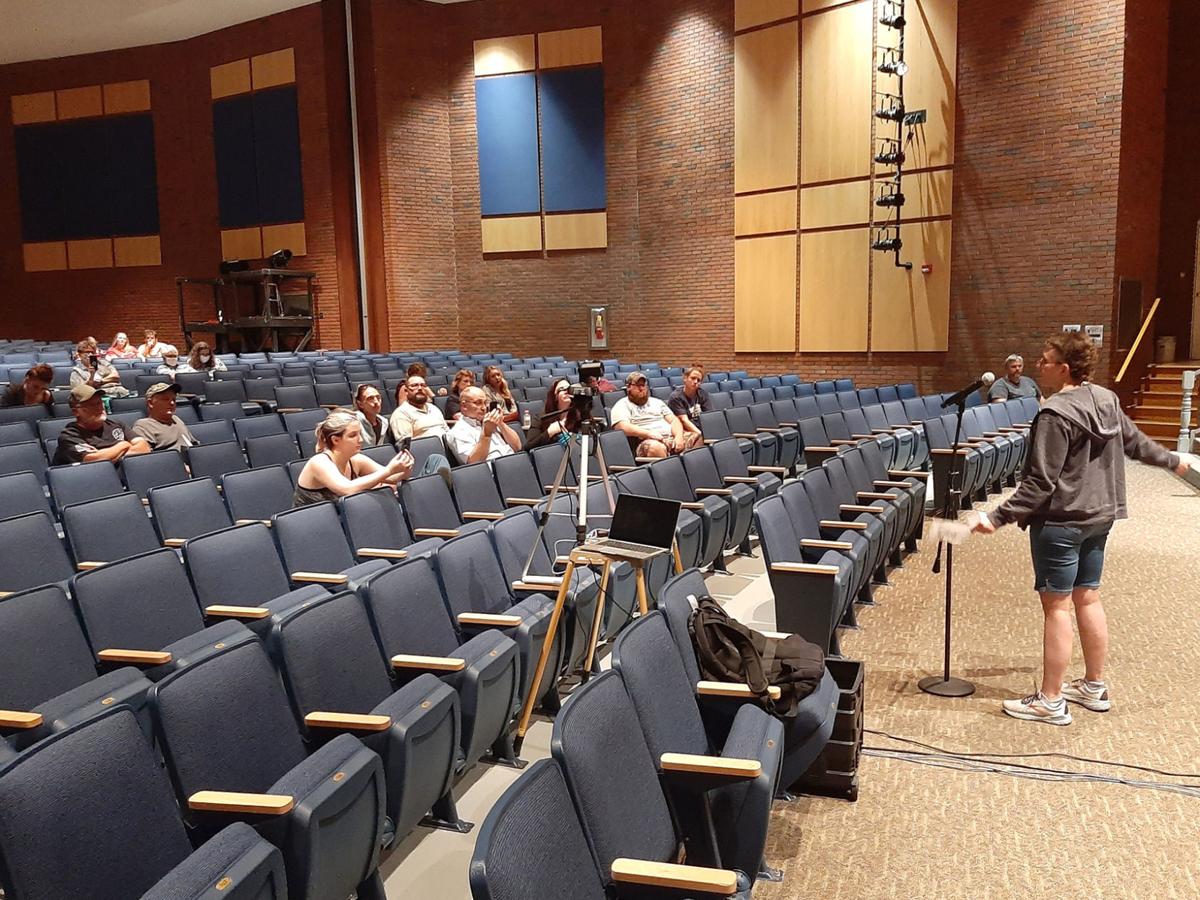 Several dozen citizens who expected a Mifflinburg Area School District meeting in the high school auditorium held a meeting of their own.

Billy Allred of Union Township says citizens who wanted to address Mifflinburg school directors should do so anyway and be recorded for Facebook.

Katherine Yoder, speaking at an impromptu gathering at Mifflinburg Area High School, compared the effect of a child’s wearing a facial covering to child abuse.

Several dozen citizens who expected a Mifflinburg Area School District meeting in the high school auditorium held a meeting of their own.

MIFFLINBURG — The Tuesday night meeting of Mifflinburg Area School District directors got off to an unusual start.

Several dozen people, presumably district residents, gathered at the entrance to Mifflinburg Area High School, but could not enter until shortly before the scheduled meeting time.

Once inside, the auditorium was set up for a regular meeting, but neither board members nor district employees were present.

Many in the gathering speculated that board members and district officials did not want to hear from the gathering. Others guessed that security of the building was at issue.

The meeting did not begin until nearly 60 minutes after its scheduled time and it was it was online only.

Near the end of the online meeting, a request was made of Superintendent Dan Lichtel to post the reason for the delay on the district website.

However, an executive session followed the regular board meeting and no notice had been posted by press time.

During the delay, the gathering in the auditorium had an impromptu meeting of their own, informally called to order by Billy Allred, of Union Township. He hoped comments not heard by the district could be posted to Facebook.

Speakers in the auditorium were largely opposed to the district’s compliance with the state directive requiring facial covering in schools.

Among them, Katherine Yoder who said restricting the breathing of a child is child abuse according to a Pennsylvania General Assembly document. She claimed that local agencies were involved in covering up abuse and similarly forcing them to wear masks.

Robert Blankenship claimed interfering with the breathing of a child, such as through use of a mask which reduced oxygen intake, was child abuse. He also claimed anyone who enforced an order to mask a child is an accessory to child abuse.

Other remarks included comparing government vaccine mandates to spouses who punish their mates for the sake of being obeyed. Suspicion of COVID-19 reporting numbers and mistrust of Gov. Tom Wolf were also noted.

Once the meeting convened, some of the participants in the informal gathering also participated online, often repeating their remarks.

Other comments were read by the meeting moderator, several of which were appreciative of the administration and compliance with the masking order.

Lichtel said he understood that wearing a face covering is not what most people would choose to do, but it has permitted regular in-person learning for the students.

He also addressed criticism that the district reversed course on facial coverings by noting the Health and Safety Plan said the district would comply with state directives.

Director Amy Wehr noted the Tamaqua Area School District’s apparent defiance of the mask mandates could render their board members liable and insurance cancellation possible. She noted there was a lot at stake for some relatively small inconvenience.