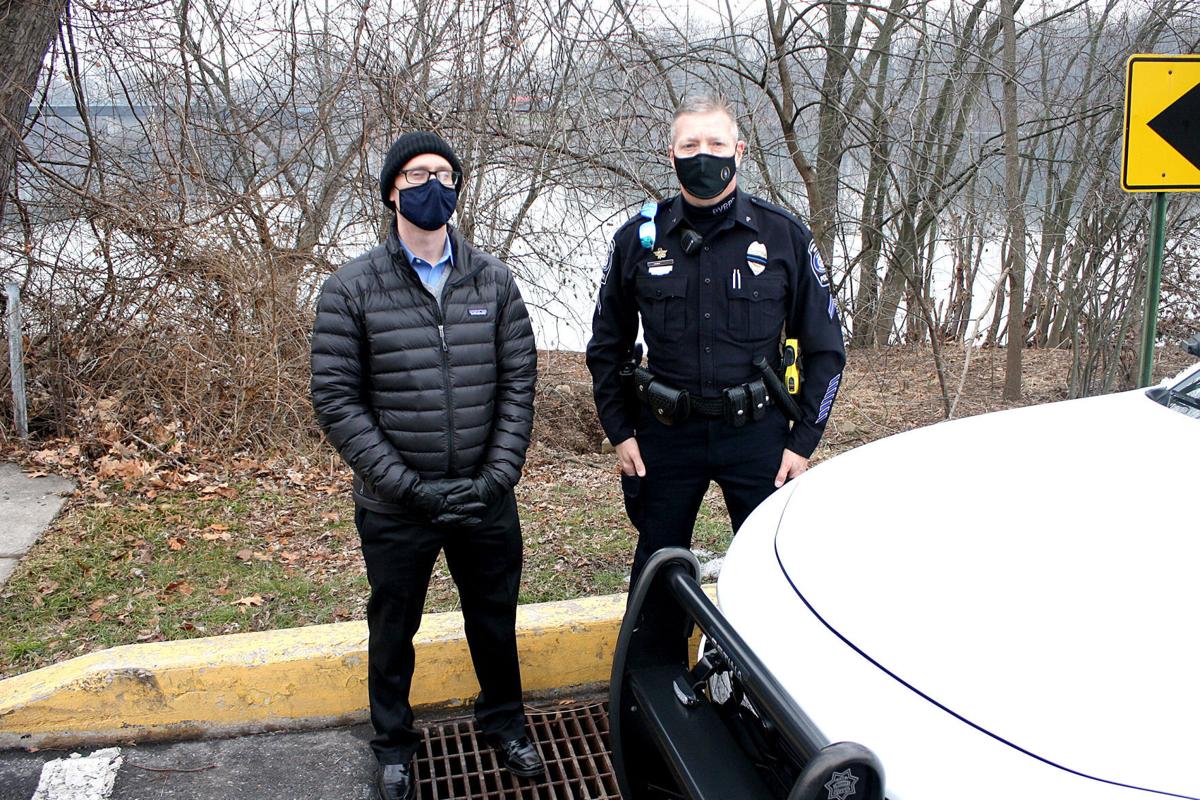 Dr. Scott Vaughan and Cpl. Travis Burrows, Buffalo Valley Regional Police, returned Friday to where they pulled a woman from the West Branch of the Susquehanna River. 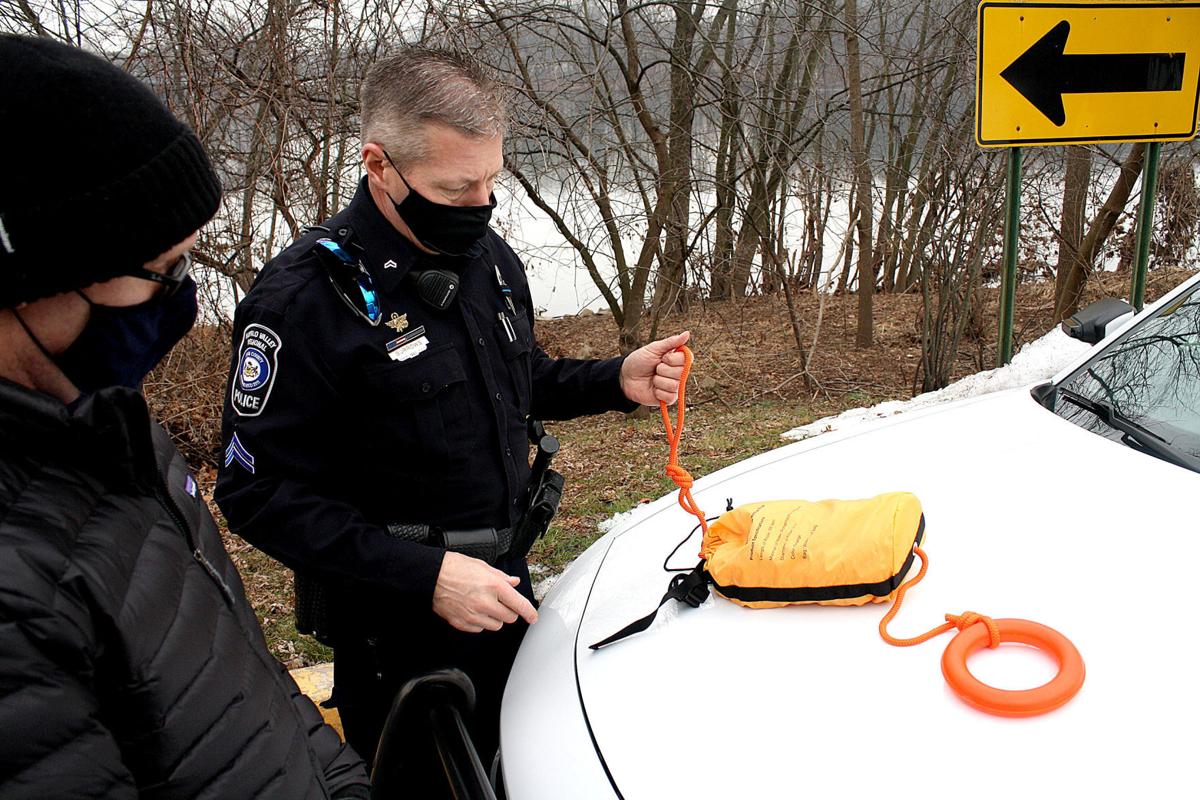 Dr. Scott Vaughan looks on as Cpl. Travis Burrows, Buffalo Valley Regional Police, shows a rescue rope they used to help pull a woman from the river who had jumped from the nearby bridge.

Dr. Scott Vaughan and Cpl. Travis Burrows, Buffalo Valley Regional Police, returned Friday to where they pulled a woman from the West Branch of the Susquehanna River.

Dr. Scott Vaughan looks on as Cpl. Travis Burrows, Buffalo Valley Regional Police, shows a rescue rope they used to help pull a woman from the river who had jumped from the nearby bridge.

LEWISBURG — Water temperatures were likely in the 30s Wednesday when two men pulled a woman from the Susquehanna River's West Branch after she jumped from the Lewisburg bridge.

Cpl. Travis Burrows, Buffalo Valley Regional Police (BVRPD), and Dr. Scott Vaughan returned on Friday to the spot where the jumper was brought from the icy water to safety.

It began as a crash, Burrows said, as the woman's vehicle jumped the curb at Market and South Front streets. Her blue sedan continued a dozen or so feet up the bridge walkway before apparently getting stuck. There was also a report that someone had jumped into the river.

Vaughan said returning to the scene was "eerie" as there were still scrapes of blue paint on a stone wall at the west end of the bridge. He recalled what he saw while driving west slightly more than 48 hours before.

"She wasn't quite at the center of the bridge," Vaughan said. "(She) was on the western side when she climbed over the rail and jumped."

Vaughan, a Geisinger anesthesiologist, saw where the motorist had crashed and took a left onto South Water Street. He walked through a yard to get a better look and decide the best course to take.

Burrows arrived about 1-minute after the dispatch of the crash. He noted most reports of people jumping off bridges were false so he made his way to the middle of the bridge where other bystanders confirmed someone had jumped off.

"They were pointing down at her," Burrows said. "I got an advantageous look and could see down and see her floating. To be honest, she was just limp and floating."

At that point, Burrows expected it was going to be a recovery rather than a rescue. But observers said she was moving, so he drove down to Water Street where Vaughan was. The two of them looked on for a moment before taking action.

"She was still out there, floating pretty slowly," Burrows said. "You could also hear some moaning. I realized we had to do something here."

Getting a rescue boat in the water would take another 5 minutes, Burrows said. But he knew from fishing in the area that the water in the area was mostly shallow. With a quick trip back to the BVRPD cruiser he retrieved a couple of 100-foot rescue ropes.

"I came down to (Vaughan) and started taking my (gear) off," Burrows said. "Didn't take my boots off, which I should have."

Burrows and Vaughan, with rescue lines, entered the water with a plan that the officer would head out a little further and grab the jumper, and they would bring her safely back.

Getting back to the riverbank proved to be a longer process.

"Now we're floating down, (Vaughan) is trying to get his foot in," Burrows said. "I'm in deeper water (and) I'm exhausted. I'm about shot."

Burrows' thoughts quickly changed from envisioning a successful rescue to wondering if he would make it back. Catching his feet on the former canal bank south of the bridge proved unsuccessful and Burrows was suddenly further down river.

"Finally (Vaughan) was able to get better footing (and) I finally felt the rope get more taught," Burrows said. "Before you know it, (Union County) Sheriff (Ernie) Ritter came in and started helping (Vaughan). I felt the rope being pulled. Now I've got to hang on."

The jumper was with Burrows the entire time after he grabbed her. Both men struggled, Burrows said, but if Vaughan hadn't been there, he doubted he would have made it.

Vaughan recalled the water was cold, but some sort of adrenaline kicked in.

"It's been an experience," he recalled. "I'm glad I was able to help."

Though never a fitness swimmer, Vaughan noted that he was previously a lifeguard and was also an Emergency Medical Technician.

"It's the second time I've been in the water like this, but it is not like I am used to it," Burrows added. "I've had some training but not an extreme for water rescues."

Burrows said the jumper was injured and should recover completely, though it could take some time. Though not confirmed, a mental health condition was suspected as contributing to the incident.

Burrows, also a 30-year member of the Warrior Run Area Fire Department, noted the department once had a rescue boat.

He recalled needing ice rescue suits for a mid-winter rescue near Allenwood. It was a scenario where the water was high and a bridge was under construction. The person apparently fell into floodwater, Burrows said, but did not survive.