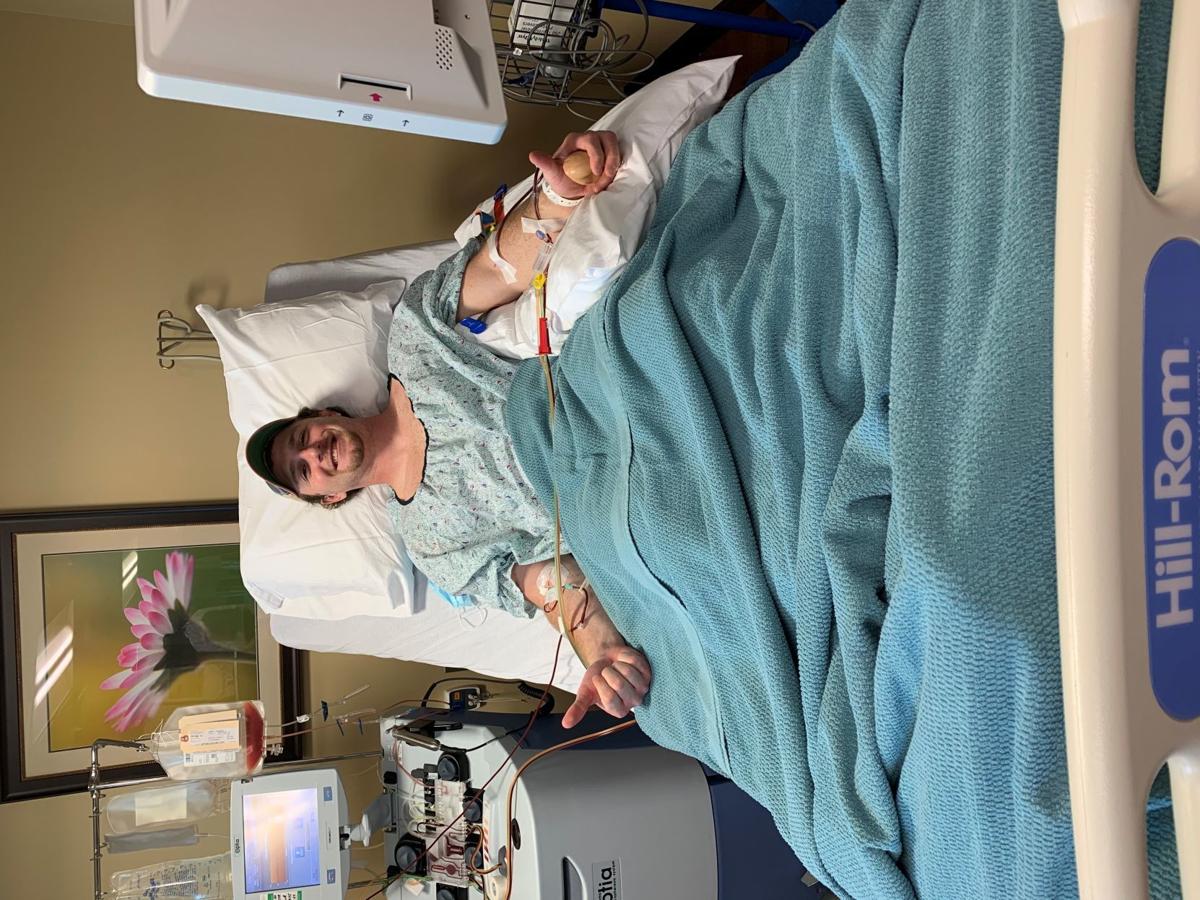 Logan Aikey, a Lewisburg grad, in his hospital bed during the donation process and also shown during his collegiate football career at Gettysburg. 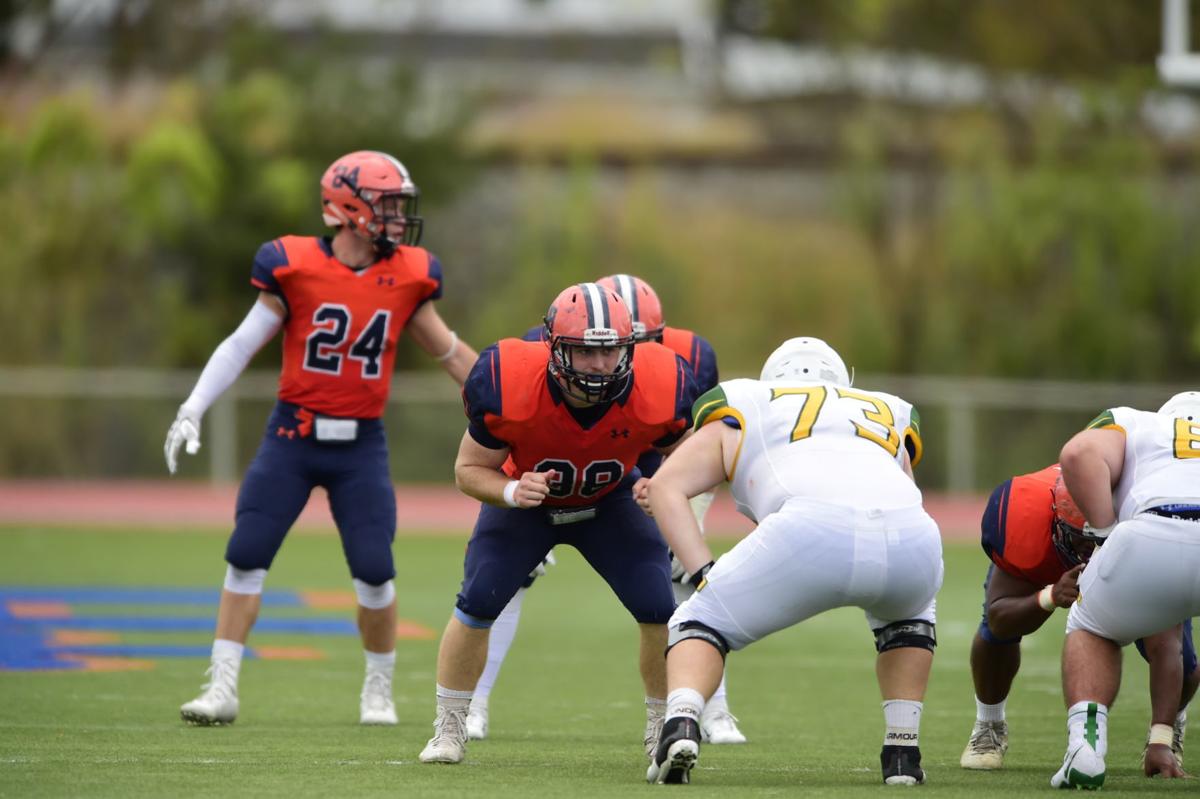 Logan Aikey, a Lewisburg grad, in his hospital bed during the donation process and also shown during his collegiate football career at Gettysburg.

As an all-conference defensive lineman on the Gettysburg College football team, Logan Aikey ’19 built his body and mind to perform at a high level on the football field. Little did Aikey realize, that work and effort was just preparation for a more important contribution to the community. Recently, he became the first football player from Gettysburg to donate bone marrow cells through the Be The Match Registry.

Aikey made his donation of peripheral blood stem cells (PBSC) on May 20 at the Eastern Regional Medical Center in Philadelphia. Those cells will be transplanted to a patient suffering from acute myeloid leukemia (AML), which is the most common type of acute leukemia with nearly 15,000 new cases found in the United States each year.

“Truthfully it was an honor,” said Aikey. “Going through with this donation really felt like the most important and fulfilling thing I’ve ever done in my life. I would absolutely encourage every person who is healthy and able to join the registry. There are a lot of patients fighting for their lives who need help, and there are many patients who do not have somebody that matches them.”

Aikey’s journey to donation began nearly two years ago as a junior on the Gettysburg football team. After two years watching from the sidelines as a back-up linebacker, the Lewisburg Area High School alum exploded onto the scene after switching positions to the defensive line. In 10 games that fall, Aikey posted a school-record breaking 17.5 tackles for a loss, with eight of those tackles resulting in quarterback sacks.

Aikey’s transformation from back-up linebacker didn’t happen overnight. He worked hard on the field and in the gym to perfect his techniques and pack on muscle.

“Logan came in as a strong player both mentally and physically,” said former Bullets defensive line coach and current Albright College Special Teams Coordinator Shaun Weaver. “Working in the weight room was very important to him and he was one of our strongest and most explosive players. He had the mental toughness and work ethic to be a special player as well. Once we made his position switch to defensive line he completely dedicated himself to being a technician and quickly became a disruptive player in his junior year.”

Aikey followed up that breakout fall season by taking part in Gettysburg’s first Be The Match Registry Drive as part of the Andy Talley Bone Marrow Foundation’s “Get in the Game. Save a Life” initiative. The Andy Talley Bone Marrow Foundation is a non-profit organization that seeks to increase the odds of finding lifesaving donors for patients in need of a marrow transplant by registering young, committed donors, many of whom are college football players, to the Be The Match Registry.

“Be The Match gives our team an opportunity to make a difference in our local area, the state and the country,” noted Gettysburg Defensive Coordinator Mike Hoyt, who helped organize the first registration event two years ago. “We have the chance to save someone’s life by joining the registry and becoming a possible match. Even if a player does not become a match joining this program, increased awareness can influence others to join the registry and increase the chance of people finding a match. The more people in the registry the higher chance of finding a match and saving a life.”

It was a simple process involving a cheek swab and some basic paperwork. Only about one out of 430 registrants becomes a match, so Aikey walked away from the registration table thinking he had a slim chance of being selected as a donor down the road. Even so, it was an easy decision for him to take the initiative and register.

“I think it was just the fact that one of us could potentially save somebody’s life someday,” he recalled. “Also knowing that if you did end up getting selected, the discomfort you would go through for a short time could never compare to what a person who is fighting for their life is going through.”

Aikey returned to his native Lewisburg to work with Integrity Industries, which manufactures drilling fluids and sells other materials for the oil and gas industry. Being on the bone marrow donor list was out of his mind, until one day earlier this spring.

He received an email message from Be The Match that indicated he was a potential bone marrow donor match for a cancer patient. It was unexpected and out of the blue, but the former Gettysburg football player didn’t waste time in responding with his willingness to donate to the cause.

For four years at Gettysburg, Aikey spent a great deal of time preparing his mind and body to compete on the football field. Now that same mindset and drive would serve him well in his pursuit to be a bone marrow donor. After several weeks of calls and tests, he was given the final nod as the best possible donor for the patient.

“After answering all of those questions, I had a sort of gut feeling that it was going to be me,” recalled Aikey. “In the following days I had all kinds of emotions ranging from nervous, to excited, to hopeful, and back to nervous. I was also anxious to know which donation type the patient would need if I were selected.”

As part of his final week of preparation, Aikey travelled to Harrisburg to receive injections of a drug called filgrastim, which pulls the stem cells out of the bone marrow and into the bloodstream for harvesting. He followed the doctor’s orders to the letter, continuously hydrating and maintain a healthy diet to ensure his body would be capable of handling the rigors of donation. It left him stiff and sore before the final procedure, but it was nothing compared to the joy of knowing the impact his blood cells could have for a patient suffering from a debilitating disease.

“The whole week there was definitely anticipation for the big day,” said Aikey. “Going to get those shots every day and the preparation almost felt like practice runs. The night before and the morning of the donation, I felt nothing but nervous excitement and a desire to do well, even though I knew at that point my performance was pretty much out of my control.”

Early on May 20, Aikey began his donation. For six-and-a-half hours, he sat immobile in a hospital bed as the doctors harvested his blood stem cells. As a young and healthy former collegiate athlete, Aikey was able to withstand the difficult process and go beyond the normal range of cells donated, giving as much as possible for the doctors to use in the transplant to the patient. When the procedure was finished, it didn’t take long for the former defensive lineman to get back on his feet.

“Afterwards, I physically started to feel better almost immediately and felt back to normal in about two days,” he said. “We were very excited that we were able to get the amount of cells that the patient’s doctor was hoping for.”

The final outcome of the transplant will not be known to Aikey for some time. It’s about a 100-day wait to see if the transplant was successful. While some anonymous communication is permitted, donor and patient won’t be allowed to meet or talk in person for at least one year. In the meantime, the patient’s blood and bones will be infused and take on the same genetic make-up of a record-breaking and hard-working former Gettysburg football student-athlete.

The Gettysburg football team held another Be The Match Registration Drive in 2019 and was scheduled to hold the same event in 2020 before the COVID-19 pandemic canceled those plans. The hope is to resume the annual event in 2021. In the first two years of registration, nearly 70 percent of Gettysburg’s football players have added their names to the registry.

Aikey takes pride in being the first Gettysburg football player selected to donate, but he recognizes the need for more. Every single name added to the list raises the chances of finding a matching donor for a cancer patient in need.

“I think that my experiences have helped me to learn and grow as a person so that I am more aware and understanding of my surroundings,” said Aikey. “With the way the world is right now, every community needs more good people in it. Simply being friendly and helping people out, whether you know them or not, really goes a long way with building a sense of togetherness within a community.”