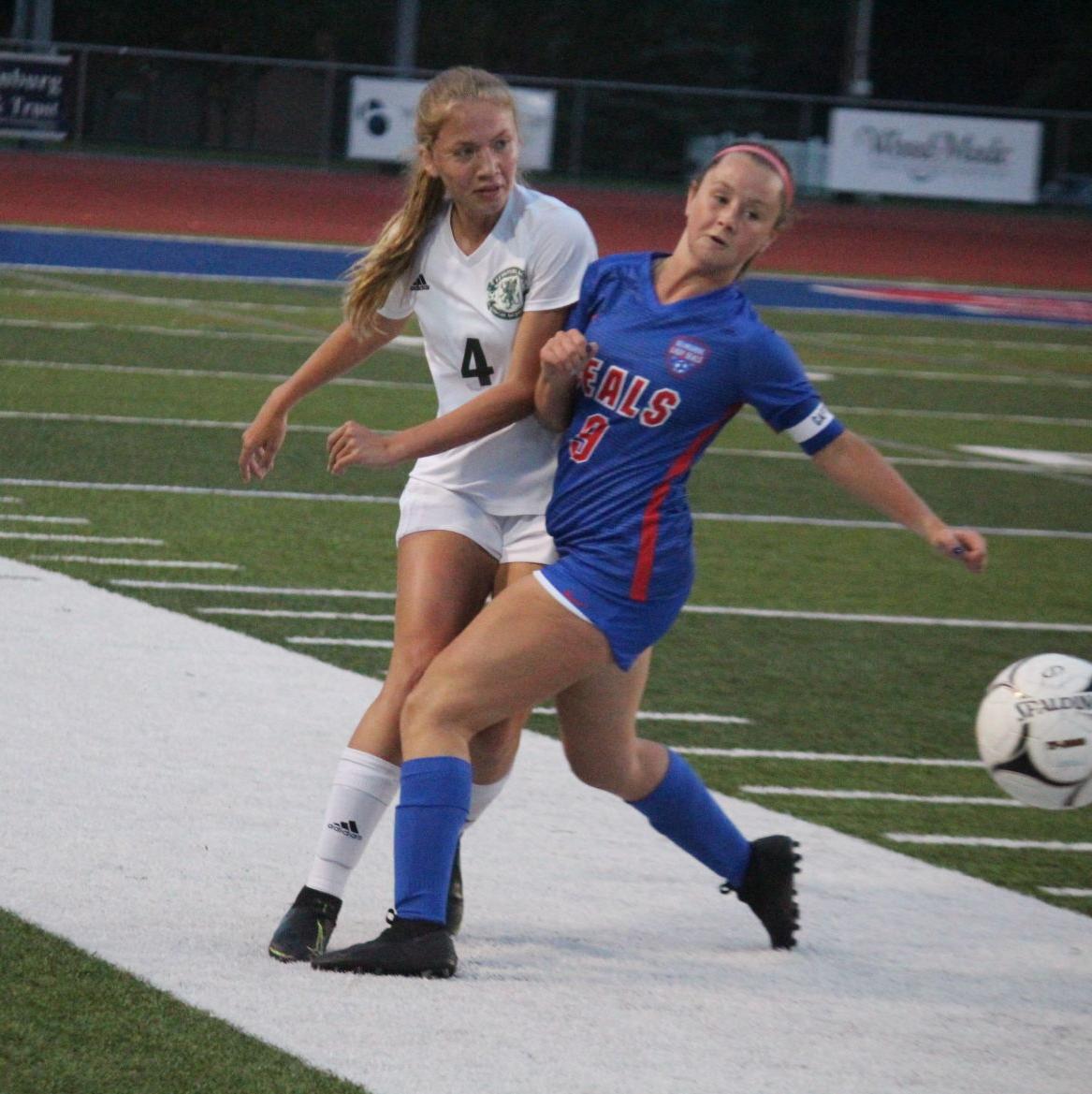 Lewisburg’s Amelia Kiepke collides with Selinsgrove’s Sydney Shatzer as they both go for a 50-50 ball in the first half of Wednesday’s contest. 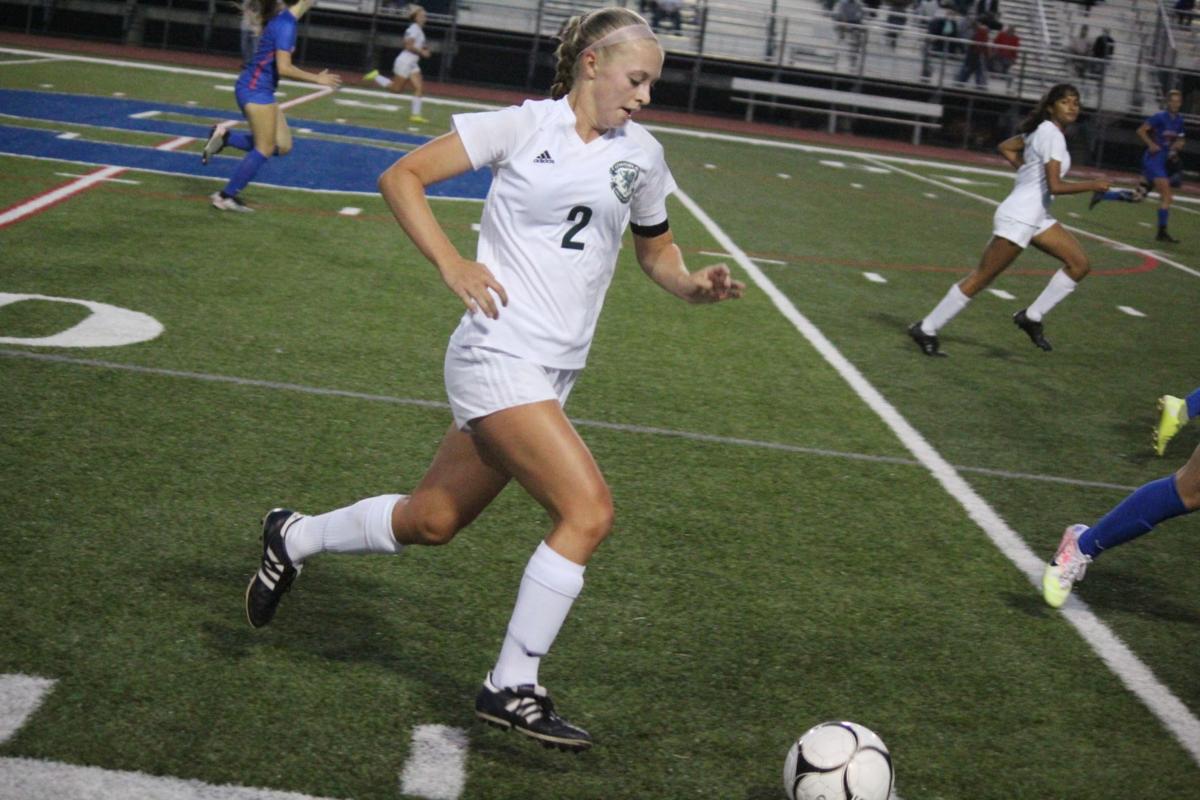 Lewisburg’s Ella Reish races up field in the second half of Wednesday’s HAC-I contest against Selinsgrove, won 1-0 by the Seals. 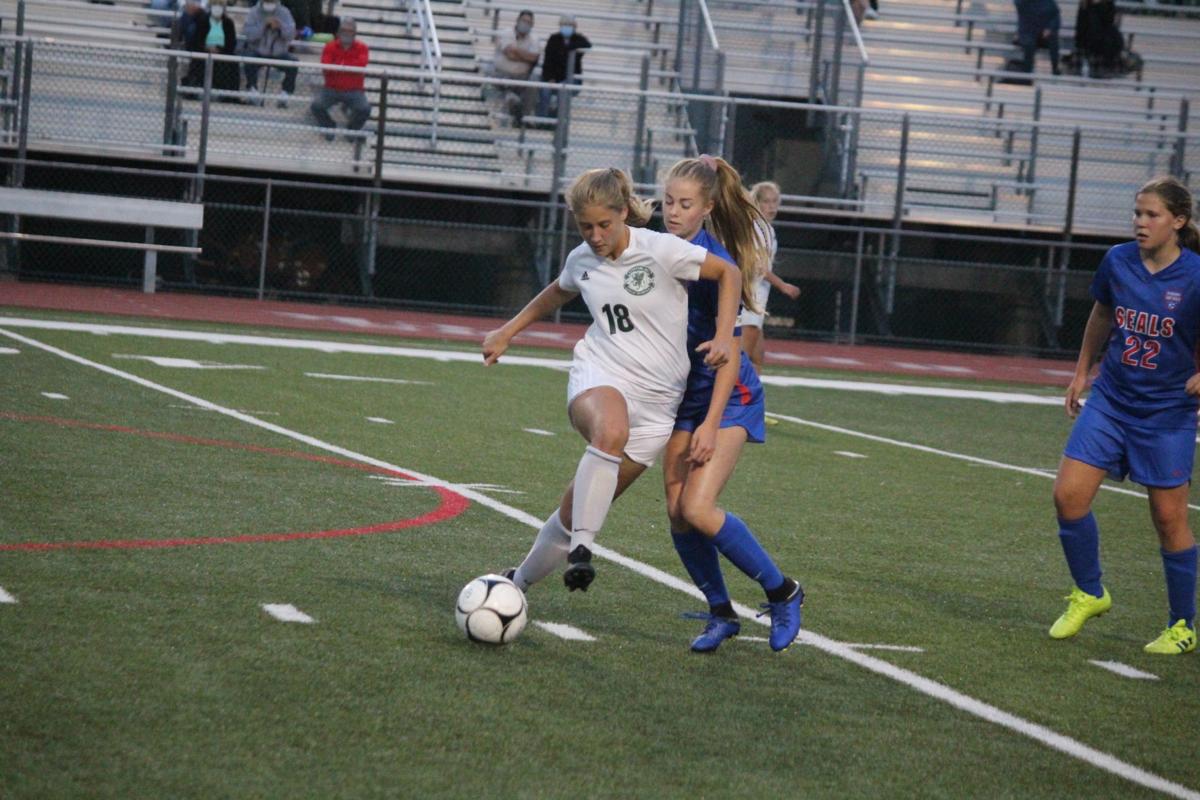 Lewisburg’s Mikayla Long elbows her way in front of Selinsgrove’s Lilian Poust to get to the ball in the second half of Wednesday’s HAC-I contest. 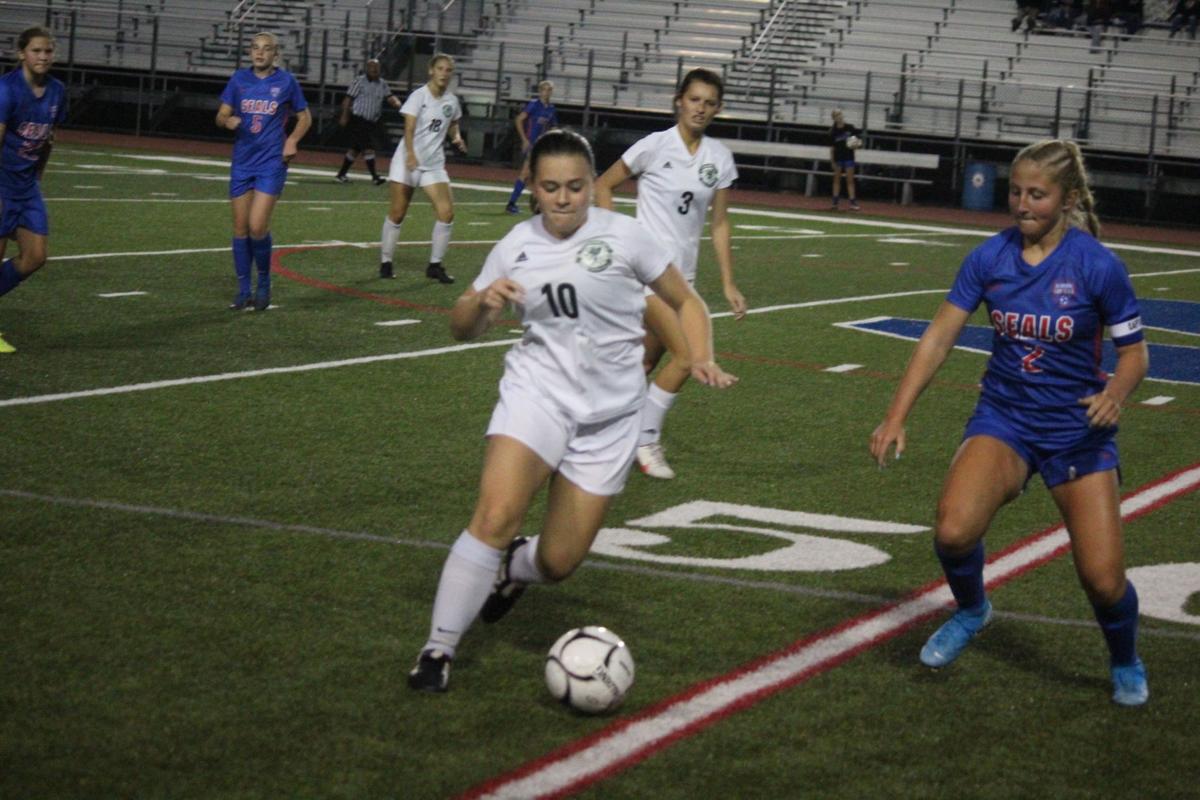 Lewisburg’s Taryn Beers gets to the ball ahead of Selinsgrove’s Lexy Gabrielson early in the second half of Wednesday’s HAC-I contest, won 1-0 by the Seals.

Lewisburg’s Amelia Kiepke collides with Selinsgrove’s Sydney Shatzer as they both go for a 50-50 ball in the first half of Wednesday’s contest.

Lewisburg’s Ella Reish races up field in the second half of Wednesday’s HAC-I contest against Selinsgrove, won 1-0 by the Seals.

Lewisburg’s Mikayla Long elbows her way in front of Selinsgrove’s Lilian Poust to get to the ball in the second half of Wednesday’s HAC-I contest.

Lewisburg’s Taryn Beers gets to the ball ahead of Selinsgrove’s Lexy Gabrielson early in the second half of Wednesday’s HAC-I contest, won 1-0 by the Seals.

SELINSGROVE — Entering the season the biggest issue facing Lewisburg girls soccer coach Terry Gerlinski was just a matter of him finding the right puzzle pieces to put his Green Dragons together.

Four games into the young season and Gerlinski is still trying to get the pieces to fit.

A long goal by Lilian Poust with 17:53 remaining in the first half lifted host Selinsgrove to a 1-0 Heartland Athletic Conference Division I victory Wednesday over Lewisburg at Harold L. Bolig Memorial Field.

The loss drops the Green Dragons to 1-3 on the season, 1-1 in the HAC-I, as they suffered their third straight setback as well as back-to-back one-goal defeats.

“I mean, it’s been a very odd start of the season for us — with a lot of outside factors and things that have taken place. The way we’re playing now and the way we played tonight, with the fight we brought to the field and the desire and the fire to work, was much better,” said Gerlinski.

“Our passing was much better, though we still have little things to work on and stuff like that, so I’m feeling much better,” added Lewisburg’s coach. “I know we lost and that sucks, but Selinsgrove is a good team. And playing against a good team — that’s better for us right now.”

Lewisburg had some good looks at the goal early, including getting a couple of free kicks and a hard shot by Ella Reish just past the midway point, but the Green Dragons couldn’t capitalize.

Moments later Selinsgrove (2-1, 1-0) capitalized on its best scoring chance of the opening half.

A long through ball by Ella Magee was sent in just past midfield to Poust on the right flank, and after taking a few steps Poust fired a high arcing shot that floated over the head of Lewisburg goalkeeper Lauren Gross and into the top-left corner of the net.

“A girl is on (Poust), and she’s taking it out of the air hip high (and she still scored),” said Gerlinski. “If she takes 50 more shots she’s not going to make one of those again, but hey, give it to her and give her credit. It was good stuff.

“But that’s really all that Selinsgrove produced was stuff over the top, and we played well trying to contain that kind of stuff,” added Lewisburg’s coach.

Perhaps Lewisburg’s best chance to score and tie the game came with under six minutes left in the first half.

Chelsea Stanton broke away and fired a rocket of a shot on Selinsgrove goalkeeper Alivia Ravy from outside the box, but the ball caromed off the crossbar.

“Oh yeah, we had some good chances,” said Gerlinski. “We need to piece the puzzle together and the final third — that last piece — is something we need to work on.”

Now Lewisburg has a few days before it takes on Mifflinburg at home on Monday to try to find ways to get the ball in the net more. The Green Dragons have been held to four goals so far this season.

“Right now, I’m literally taking it game-by-game, and I’m not even looking past the next game,” added Lewisburg’s coach. “There’s so much stuff going on right now — it’s game-to-game.”

A bright spot from the game for Lewisburg was the play of backup goalkeeper McKenna Meadows, who replaced Gross in the second half. Meadows responded by making three quality saves.

It’s just one way that Gerlinski is trying to not only find the right pieces in his lineup, but also to light a fire under his girls.

“I put the goalkeeper position up for sale, if you want to say. I need some competition. I need to create some more competition with our positions, and that’s going to happen across the field,” said Lewisburg’s coach.

“McKenna did good — she’s right there — and that’s why if I didn’t feel comfortable making that decision and doing it, I wouldn’t have done it,” added Gerlinski. “McKenna is playing well and Lauren needs a challenge and I want to see what a challenge does — and in some of the other places. Other ladies are getting challenged, and we need to have that in order to get them focused and play harder.”

Selinsgrove 1, Lewisburg 0at SelinsgroveFirst half