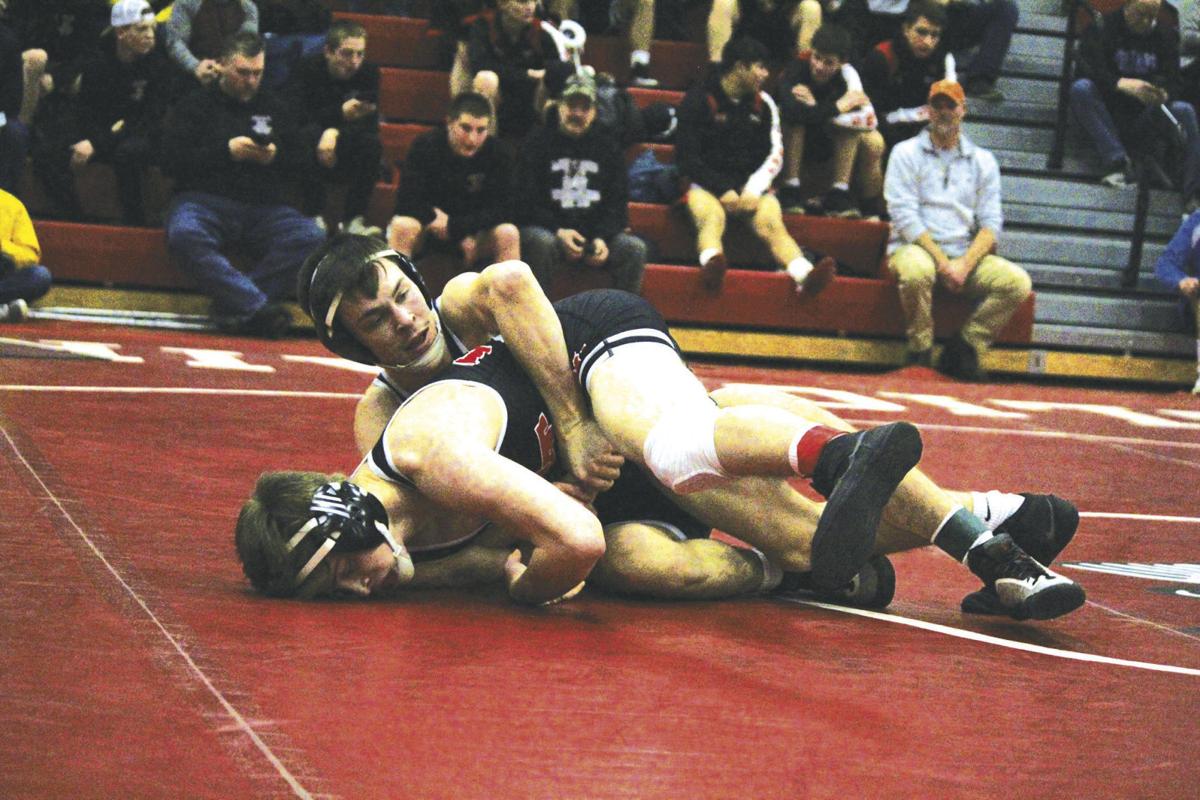 Mifflinburg’s Clayton Reed tries to roll Lackawanna Trail’s Dalten Klinges onto his back during their 138-pound quarterfinal bout on Day 1 of the PIAA Class 2A Northeast Regional at Williamsport High School. Reed won by a 5-1 decision. 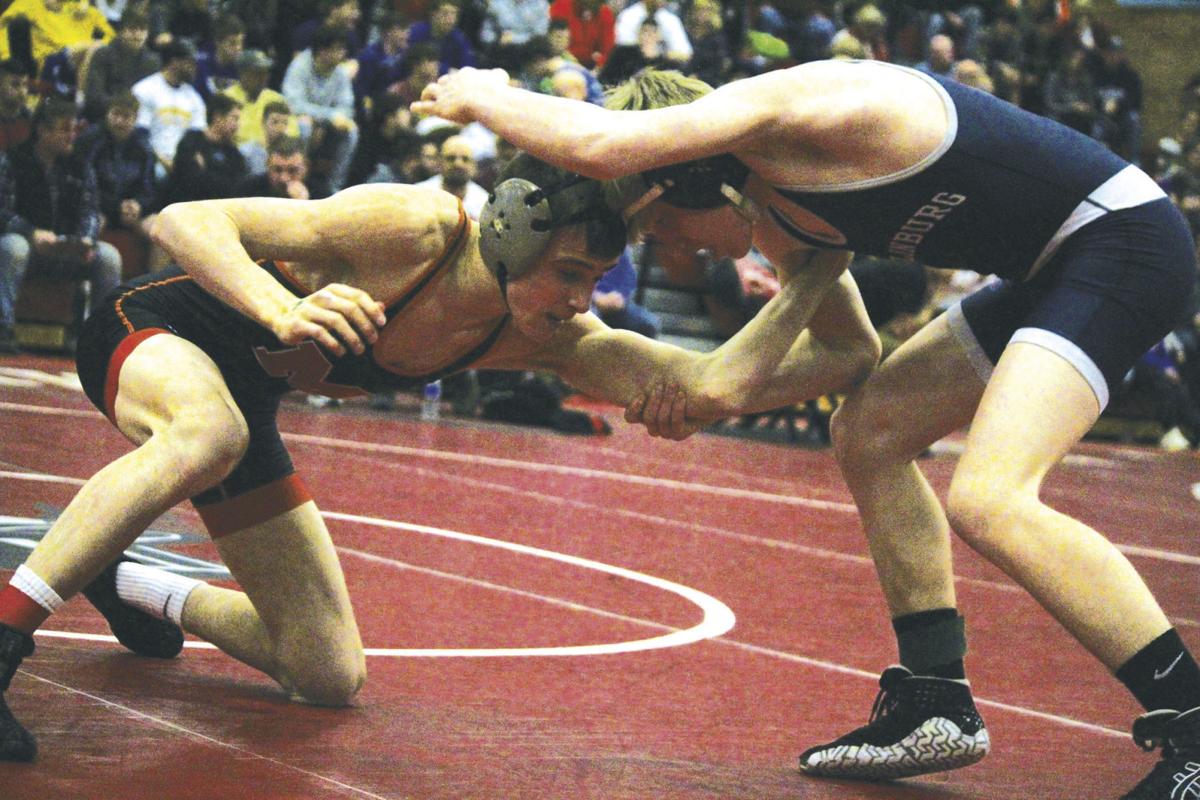 In one of the most anticipated matches on Day 1 of the Class 2A Northeast Regional, Milton’s Kyler Crawford (left) grapples with Mifflinburg’s Troy Bingaman during their 132-pound quarterfinal, won by Crawford 4-1.

Mifflinburg’s Clayton Reed tries to roll Lackawanna Trail’s Dalten Klinges onto his back during their 138-pound quarterfinal bout on Day 1 of the PIAA Class 2A Northeast Regional at Williamsport High School. Reed won by a 5-1 decision.

In one of the most anticipated matches on Day 1 of the Class 2A Northeast Regional, Milton’s Kyler Crawford (left) grapples with Mifflinburg’s Troy Bingaman during their 132-pound quarterfinal, won by Crawford 4-1.

WILLIAMSPORT — Out of 10 area wrestlers to qualify for the PIAA Class 2A Northeast Regional, a total of eight have moved on to the semifinals as Day 1 of the tournament came to an end Friday at Williamsport Area High School.

With at least two matches facing each wrestler on Day 2, getting on and off the mat as quickly as possible was the order of the day on Friday.

Hunt, who’s still dealing with a leg injury he suffered earlier this postseason, made quick work of Lackawanna Trail’s Michael Bluhm by getting a pin in 1:09.

“The past two weeks (Noah) has been trying to get off the mat as quickly as possible to avoid any further damage where he’s at,” said Warrior Run coach Jeremy Betz. “So he’s just trying to get out there, and when he got into position off the takedown he had (Bluhm’s) arm back a little bit and had him turned a little bit.

“So, Noah attacked that position and he was able to get a pin from that,” added Warrior Run’s coach.

At heavyweight, both Rauch and Ulrich also began their tournaments with pins — quick ones to boot.

Rauch pinned a familiar opponent in Western Wayne’s Jack McAllister, whom Rauch faced twice at last year’s regionals. This time around Rauch got the fall in just 58 seconds.

“On and off (the mat). Early on, you just want to get on and off the mat,” said Rauch. “Once I progress through (the tournament), I’ll just need to wrestle a little smarter because the opponents are going to be tougher, so I’ll just have to persevere.”

Ulrich manhandled his opponent, Wyoming Area’s Ethan Speece, to the tune of a 51-second pin.

Ulrich, who capped off a fine first day for the Mifflinburg wrestling program, will now go up against Rauch in today’s semifinals.

“I think we wrestled well overall,” said Mifflinburg coach Derek Reber. “It feels really good (to advance three). Coming in with four (wrestlers) and sending three of them in (to the semis). I still think we have a shot at sending all four on (to states), but we’ll see.”

One of the toughest quarterfinal bouts on the night belonged to the No. 2-seeded Wirnsberger, who managed to get by Line Mountain’s Aidan Kritzer, 2-0, to get one step closer to states. In the semis Wirnsberger will face Montoursville sixth seed Branden Wentzel.

At 113, Majcher nearly picked up a major decision as he took care of Lackawanna Trail’s Deegan Ross, 12-5, after he trailed early in the match. Majcher next faces Athens’ No. 3 seed Gavin Bradley in the semis.

“It was good to see Kaden come back. He was down 4-3 at one point and gave up the initial takedown and then came back,” said Betz. “He was able to get some back points and continue to score in the match, and I think that is what he does well.

Gramly, after getting a takedown and some back points in the first period against Montrose’s Dylan Geertgens, never relented the rest of the way as he rolled to a 15-0 technical fall. Next up for Gramly is a tussle against Tunkhannock No. 1 seed David Evans in the semis.

“Coming out and getting that first round out is really good (for Gabe), because you set yourself up in a better spot (today),” said Reber.

Crawford and Mifflinburg sophomore Troy Bingaman duked it out in their 132-pound quarterfinal, with the Black Panther pulling out a tough, 5-1 victory, to advance into the semifinals where he will face Canton’s Hayden Ward.

“I wasn’t feeling the best coming into the match, but a win is a win. Just getting that match over with is all that matters,” said Crawford. “I wrestled (Bingaman) before so I knew what to expect, so that gave me a little bit of confidence going in and I just went with it.”

Bingaman and Crawford have wrestled several times the past two seasons, and most of the matches have been close like Friday’s.

“They wrestled each other twice last year as well, and other than the first match last year they have all been pretty close,” said Reber. “They had a close match before (Crawford) pinned Bingaman at sectionals, but Crawford is a tough kid.”

And at 138, Reed used a third-period escape and then a takedown to come away with a 5-1 victory over Lackawanna Trail’s Dalten Klinges. Reed next faces top-seeded Zach Stuart of Lake Lehman in the semis.

“I still think he controlled most of that match, and it was a good test for him (to get ready) for Stuart (today),” said Reber.

Aside from Bingaman, the other area wrestler to fall into the consolation bracket is Lewisburg sophomore Kaiden Wagner, who fell to top-seeded Scott Johnson of Muncy, 3-1.