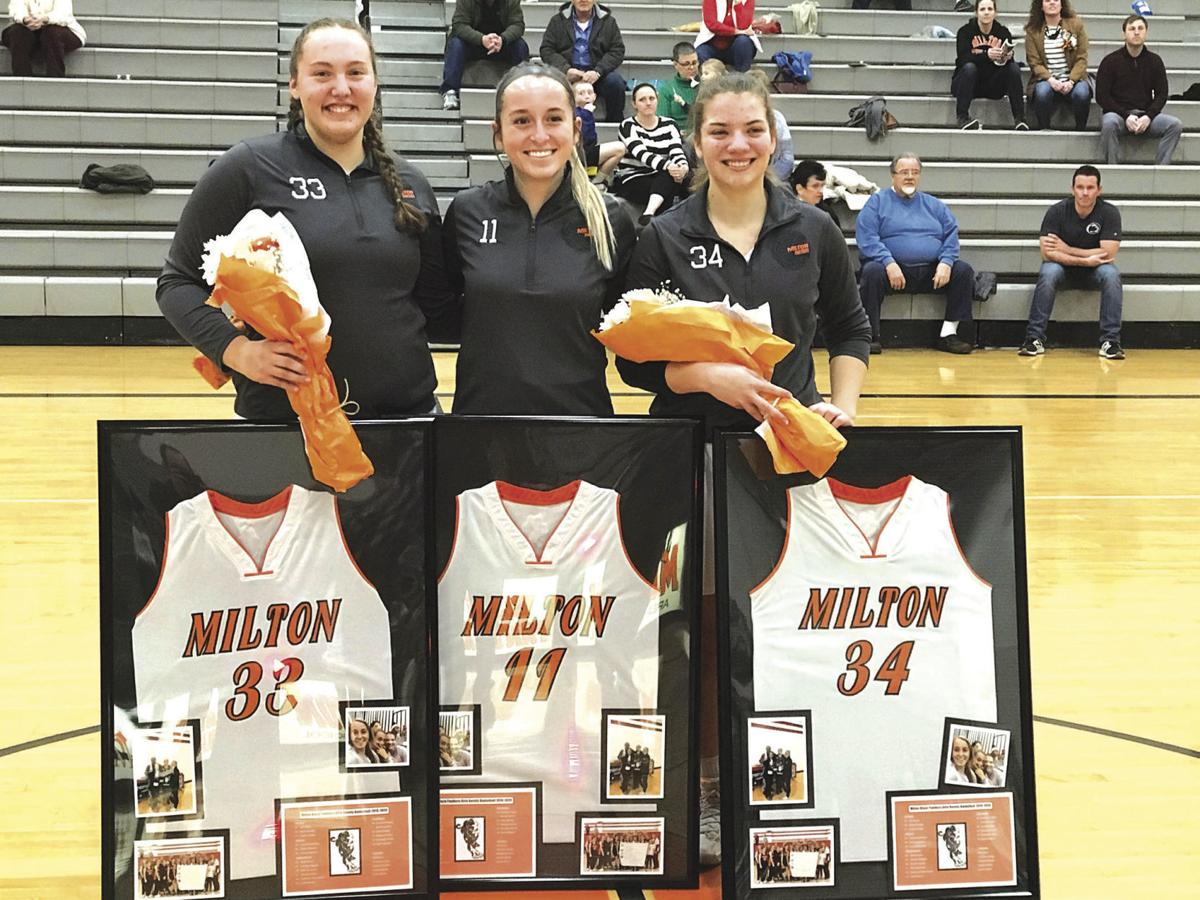 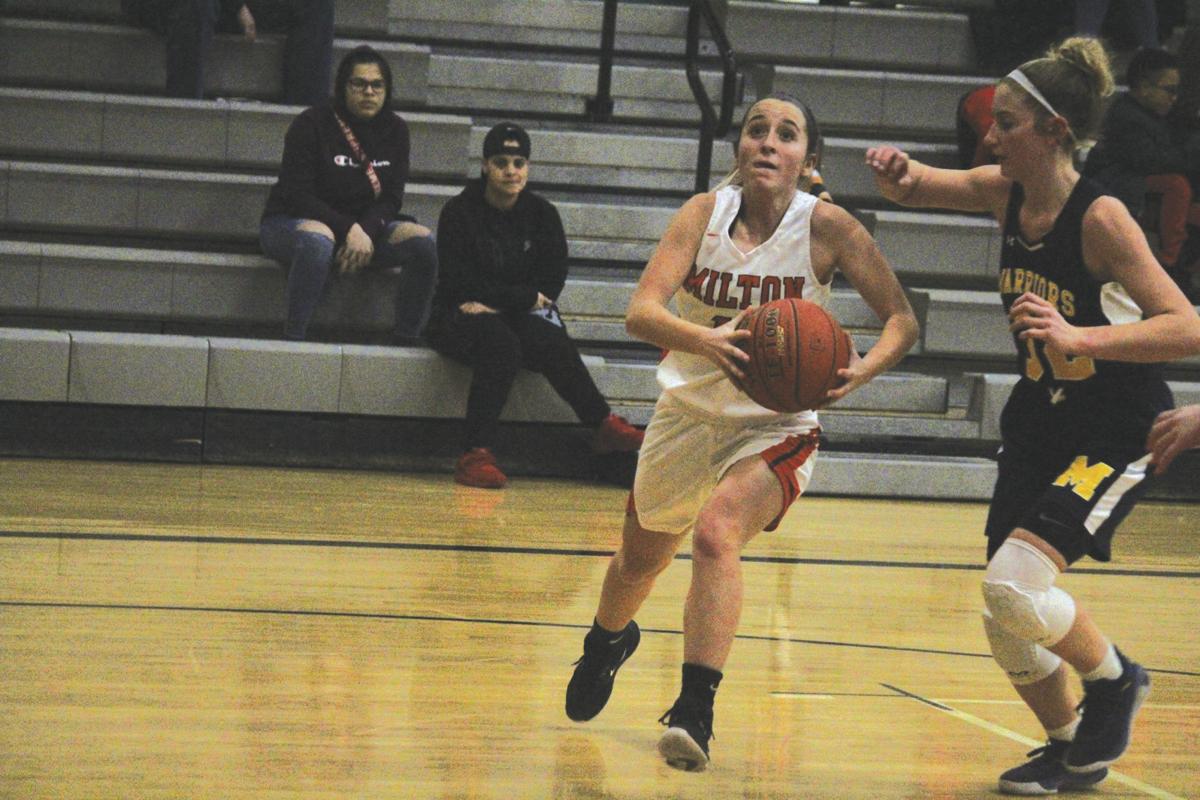 Milton’s Taylor Snyder drives past Montoursville’s Maddie Adams to get to the hoop in the first half of Wednesday’s contest inside The Jungle.

Milton’s Taylor Snyder drives past Montoursville’s Maddie Adams to get to the hoop in the first half of Wednesday’s contest inside The Jungle.

MILTON — The first half of Wednesday’s Heartland Athletic Conference crossover matchup against Montoursville was something that neither Milton head coach Phil Davis nor his players have experienced yet this season.

The Black Panthers jumped out to an early double-digit lead and never looked back in taking a 52-39 victory over Montoursville inside The Jungle on Senior Night.

Milton (6-15), which entered the contest averaging just over 30 points per game, bettered that output by nearly 20 points versus the Warriors.

One of the stars of the night for the Black Panthers was senior Tori Brink (13 points), who was honored prior to the game along with classmates Taylor Snyder and Mylea Neidig.

“I’m really proud of our team and what we did tonight. I think it’s important to work together as a team, and we really executed tonight,” said Brink. “It’s all luck of the draw when it comes to making shots, and I’m not saying we got lucky because I do believe in us.

That was especially true in the first quarter as Milton got out to a 9-0 lead beginning with a 3-pointer by Leah Walter that was followed by a pair of baskets from Neidig and one by Raulerys Vega-Garcia.

With 2:45 remaining in the second quarter the Black Panthers’ lead grew to 23-1 after a pair of free throws from Walter that capped a 10-0 run by the hosts.

A jumper by Montoursville’s Alaina Marchioni with 2:05 left in the opening half represented the Warriors’ first basket of the game, but it was a small pittance considering Milton ended up taking a 23-3 lead into the break.

“That was pretty good for us, and it was a good start. We just kept capitalizing on it, and good things happened. The girls came out very excited and very focused in,” said Davis. “It was a big night for our three seniors, who played outstanding as usual, and we had good contributions from everybody. I thought we protected the ball really well in the first half and got some really good shots, and defensively we played well.”

Holding a team like Montoursville (5-16) to just three first half points was incredible, but it didn’t last. The Warriors woke up in the third quarter and scored 17 points to cut their deficit to 34-20.

Montoursville would eventually get to within 39-30 with 4:47 left in the game on a bucket by Sydney Stone.

“Montoursville didn’t shoot the ball great in the first half, but they certainly did in the second half and they made (the game) very interesting,” said Davis. “I think I panicked probably a little bit more than my girls did. If you look back on it (my girls) were probably more in control and it felt like they had the game in hand. They never panicked, and once we protected the ball and got some looks off the fastbreak — we were kind of able to extend the lead some.

Milton wasn’t too shabby from the field in the second half as well.

Brink hit a floater in the lane to build the Black Panthers’ lead back up to 11 with 3:06 left, but the Warriors resorted to fouling the rest of the way with Snyder making them pay from the charity stripe.

Snyder went to the line five times in the final four minutes of the game. After she missed her first two shots, Snyder didn’t miss the rest of the way as went 8-for-8 to put the game away.

“I thought all three seniors — Taylor, Tori, Mylea — really played outstanding on both ends of the court,” said Davis. “We ask a lot of Taylor defensively, and she shuts down a lot of really good scorers, and then she got hot on the free throw line and really didn’t miss. That was big for us. We needed those free throws.”

Milton has one game left this regular season (at Jersey Shore on Friday), before the Black Panthers venture into the District 4 Class 4A playoffs as the No. 6 seed. Milton has a one game lead over Montoursville and is 1. 5 games back of Jersey Shore.

“I just think that if we continue to work one day at a time, we have some more games left — one more in the regular season and then prepare for the playoffs,” said Davis. “We got to stay healthy, which I think we are right now, and just keep battling every day and I think we’ll be okay.”

“We’re going to play our hearts out (Friday) — that’s all we ever do,” said Brink. “We just got to execute and work as hard as we always do.”