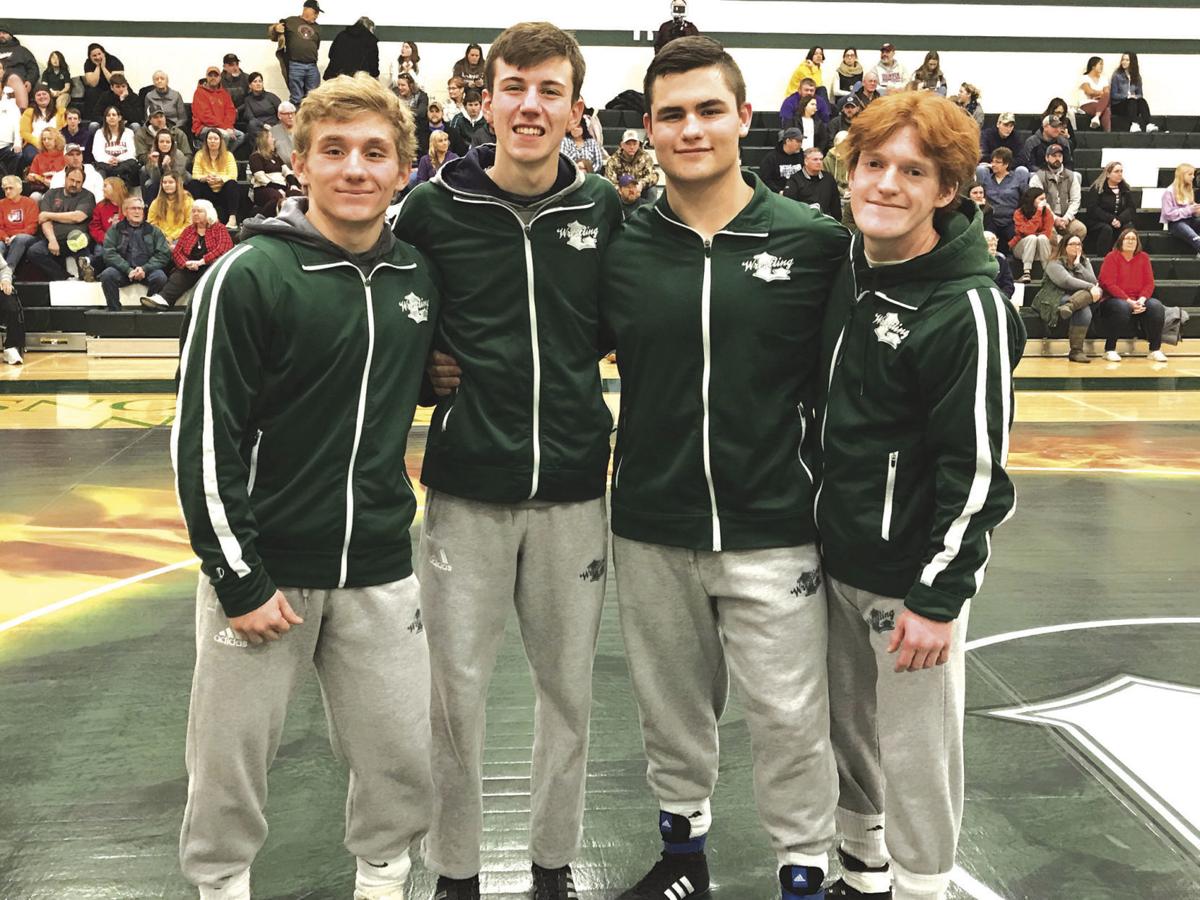 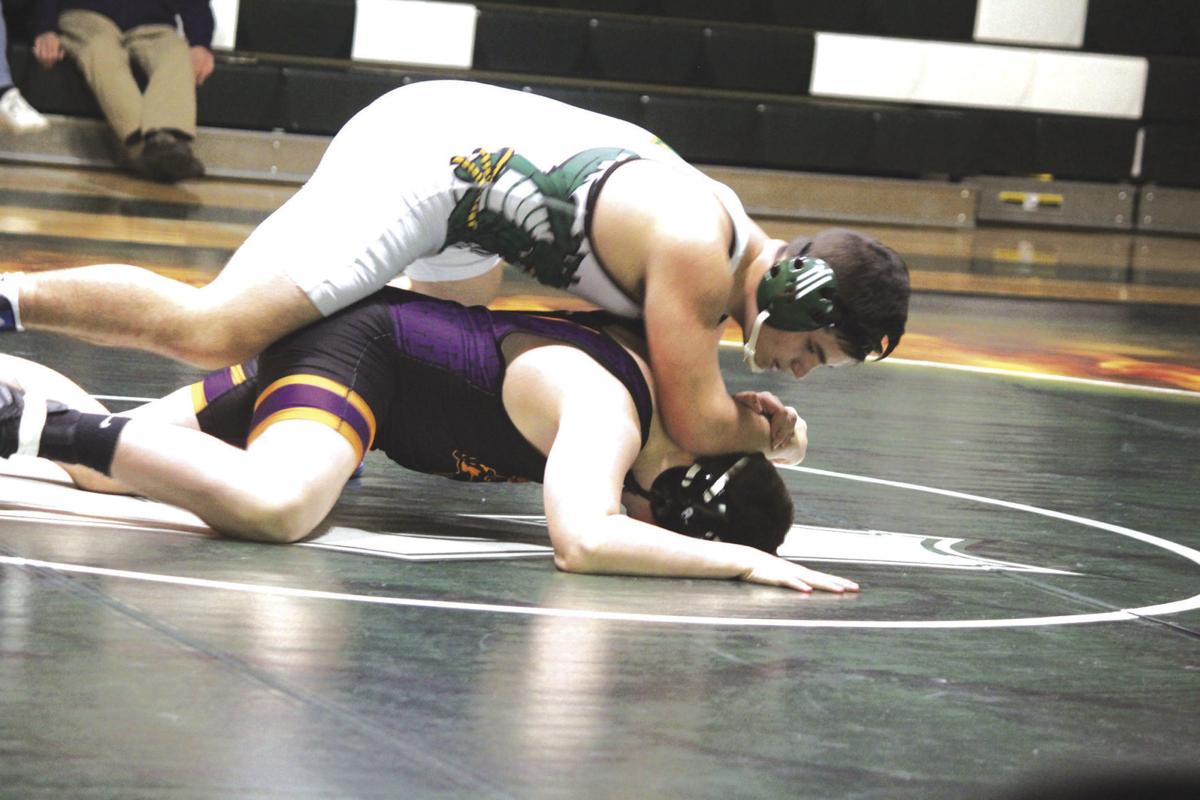 Lewisburg’s Riley Bremigen puts the pressure on Danville’s Andrew Davis during their 220-pound bout. Bremigen pinned Davis at 1:52 to lift the Green Dragons to a thrilling, 42-36 victory over the Ironmen.

Lewisburg’s Riley Bremigen puts the pressure on Danville’s Andrew Davis during their 220-pound bout. Bremigen pinned Davis at 1:52 to lift the Green Dragons to a thrilling, 42-36 victory over the Ironmen.

LEWISBURG — The pressure was on Riley Bremigen.

Thursday’s Heartland Athletic Conference Division II match between Lewisburg and Danville came down to the 220-pound bout, which featured Bremigen going up against the Ironmen’s Andrew Davis.

A first-year wrestler competing in his final home match on Senior Night, Bremigen perhaps wrestled his biggest bout of the year at just the right time.

Bremigen pinned Davis in at the 1:52 mark to give Lewisburg a 42-36 victory in the Dragons’ Lair.

“It was just a great night in general, and a great night for high school wrestling. It was one of those matches where you hate to see a loser, and it was a back-and-forth match all night long,” said Lewisburg coach Justin Michaels. “For our guys, they were due. They were due for an opportunity (for a win like this). We’ve suffered so many injuries throughout the year and we haven’t had our full roster all season long, and we’re still down guys.

“The kids continued to battle, they believed in the training and the process, and fortunately some things went our way tonight and we came out on top,” added Lewisburg’s coach.

Two early takedowns gave Bremigen a 4-0 lead, but the Green Dragon quickly put Davis on his back and moments later he got the pin to give Lewisburg (9-10) the victory.

“Yeah, I mean there was a lot of pressure going into it. Coach basically said, ‘you win and you win for the whole team,’” said Bremigen. “I tried to stick (to the game plan) and I didn’t do anything too far-fetched, but when the opportunity presented itself, sometimes you got to go for the pin.

“The whole team put a lot of work in, and we’re a lot of young guys, and it paid off tonight,” added Bremigen. “I was just thinking — I’m more conditioned than (Davis) going in and I had like four pounds on him — so I felt confident going into the bout.”

That confidence began to grow early in the match for Lewisburg when Adam Gilligbauer erased a 3-0 deficit to pin Danville’s Roman Erdley in 5:37 to start the hosts off with a 6-0 lead.

“That was a huge situation with Gilligbauer there. He was down 3-0 and he got his opportunity, and that’s something we’ve been stressing — get bonus points when you take a guy to his back and don’t give them up, “said Michaels. “Adam came through tonight and did his job. He got the fall and got us propelling right away.”

The Ironmen’s Blake Sassaman answered with a pin over Jace Gessner at 106, but the Green Dragons came back with a pin in 3:29 from Tom Lyons over Braeden Earlston at 113 and a pin in 3:09 from Kaiden Wagner over Kyle Vanden Heuvel at 120 for an 18-6 lead.

Fellow senior Gavin Sheriff also highlighted the match with a pin in 3:45 over Brayden Sarviss to give the Green Dragons a 24-12 lead. Later, Logan Bartlett pinned Giuseppe Conigliaro in just 36 seconds at 145 to push Lewisburg’’s lead up to 30-18.

Danville, however, got decision wins at 152 and 160 to inch closer but 170-pounder Hagen Persun temporarily put a stop to that by pinning Tyler Artley in 3:39 to help set up Bremigen’s heroics at 220.

“Hagen Persun stepped up tonight huge as well, and got that win. It was tough for him. He sits there and watches his brother (Broghan) just lose, and Broghan is having a phenomenal season,” said Michaels. “And that’s what (Hagen and I) talked about. I said, ‘your brother has picked us up all season long, and now it’s your opportunity to pick him up — and that’s what Hagen did — and that’s something he can really build off of, and the same for Riley.

“These are the nights that these kids will never forget,” added Lewisburg’s coach.

With the win, Lewisburg needs one more to qualify for the District 4 Duals next week. The Green Dragons will certainly get that chance this weekend as they travel to Hughesville for a quad meet that will also feature Central Columbia and Mount Carmel.

“We got a big weekend ahead of us. It’s three tough matches and we got to bring our “A” game. Basically, we need to win two of the three to qualify for the district duals, and that’s our goal going into the season,” said Michaels. “We knew we were going to be young, but we didn’t anticipate all of these injuries, so we’re still trying to get ourselves healthy, and continue to work hard and get better.”