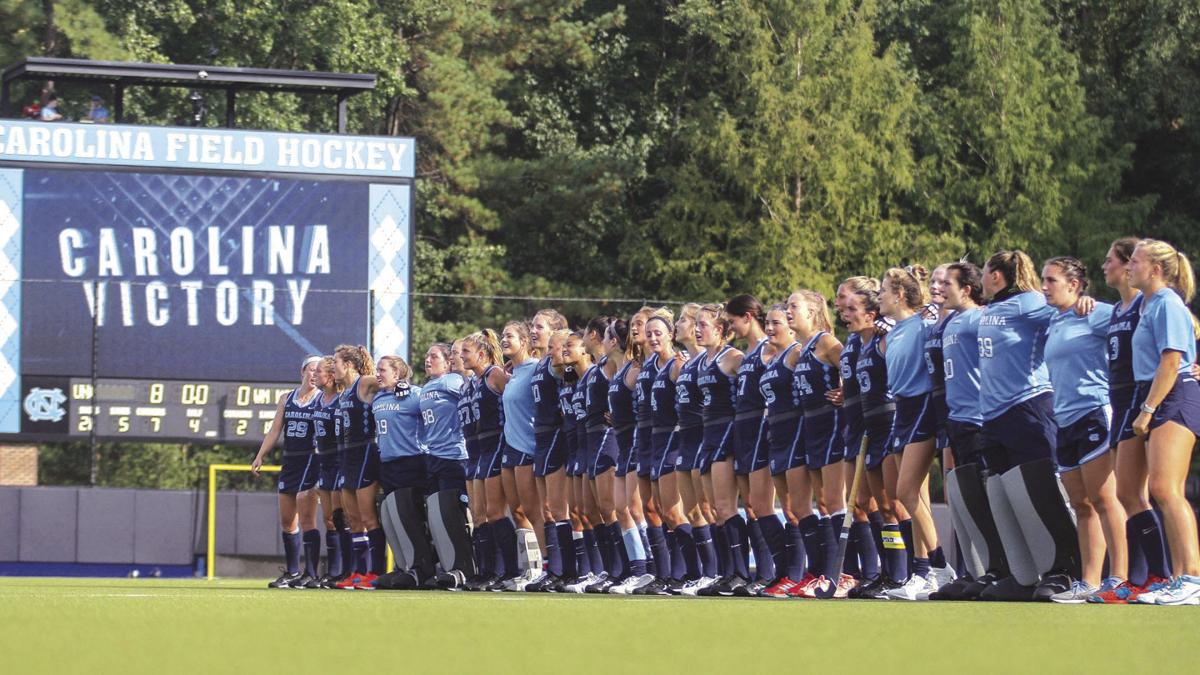 The University of North Carolina field hockey following its victory over William & Mary on Sept. 15. Cassie Sumfest is at far right, wearing a blue t-shirt. Sumfest suffered a torn ACL prior to the season. 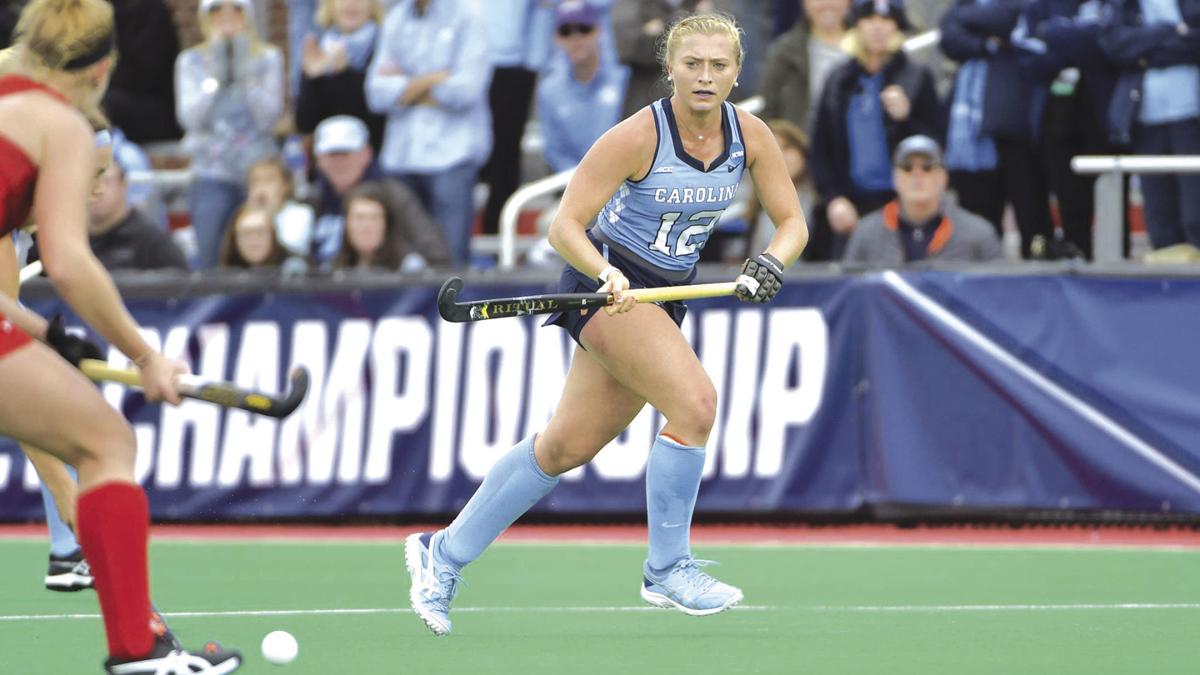 Cassie Sumfest, a junior on the University of North Carolina field hockey team and a Lewisburg Area High School graduate, is pictured during the 2018 national championship game against Maryland. Sumfest suffered a knee injury in the spring which caused her to miss the 2019 season. 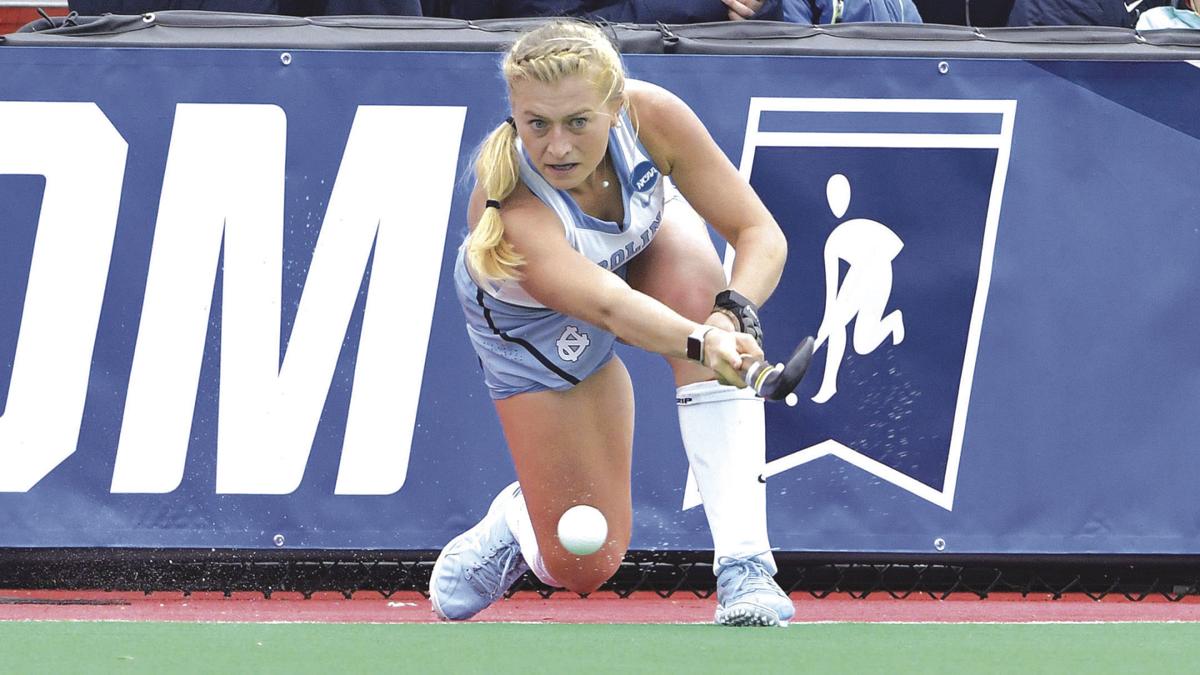 Cassie Sumfest, pictured during a 2018 contest against Wake Forest, used her time while rehabbing her knee injury to become a leader to a young North Carolina back line this season. The Tar Heels won their second consecutive national championship on Nov. 24.

The University of North Carolina field hockey following its victory over William & Mary on Sept. 15. Cassie Sumfest is at far right, wearing a blue t-shirt. Sumfest suffered a torn ACL prior to the season.

Cassie Sumfest, a junior on the University of North Carolina field hockey team and a Lewisburg Area High School graduate, is pictured during the 2018 national championship game against Maryland. Sumfest suffered a knee injury in the spring which caused her to miss the 2019 season.

Cassie Sumfest, pictured during a 2018 contest against Wake Forest, used her time while rehabbing her knee injury to become a leader to a young North Carolina back line this season. The Tar Heels won their second consecutive national championship on Nov. 24.

CHAPEL HILL, NC — When the University of North Carolina field hockey team beat Princeton to claim its second consecutive NCAA Division I championship on Nov. 24, junior back and Lewisburg Area High School graduate Cassie Sumfest experienced something quite different than she did the year before.

In 2018, Sumfest was on the field when the Tar Heels defeated Maryland for the title, but this season, she had to observe the game from the sidelines, seven months into rehabbing a torn ACL which she suffered in a spring scrimmage. The non-contact injury forced Sumfest to do something that she had never done before — watch.

“It’s been unbelievably difficult,” Sumfest said of her injury and subsequent recover process. “I never really understood the whole extent of the rehab process, how much time and effort you have to put into it. It’s given me a new perspective on injuries and how physically and emotionally draining it is on you. That’s really helped me grow as a person and as an athlete, but considering I was on the field all last season and (the injury) happened in the spring, it made me shift my focus from on-the-field actions to off-the-field actions. I just tried to be a leader off the field and since it is a young back line, I’m pretty close with a lot of them and just being a support system for them, I think that was a big impact that I had (this season).”

Since her high school days at Lewisburg, Sumfest has been a non-stop competitor on the field and has traveled all over the world playing the sport that she loves. For the Green Dragons, she was a four-time all-state and four-time all-district selection. Sumfest has also been a member of the U-17 USA junior national team, the U-19 USA junior national team and is currently a member of the Under-21 national team. While her unyielding work ethic has no doubt increased her skill level, Sumfest believes that her knee was fatigued and at one critical point during the spring, the anterior cruciate ligament just gave out.

“I was doing USA and UNC training and I was just very fatigued from both and then we had a spring scrimmage and it was just a non-contact injury,” Sumfest said of her season-ending ligament tear. “I was on the ball and it just gave out. It was just a little bit of overuse, I would say. I’ve had ankle sprains, but I’ve never been out for over a month, really.”

This season, as the Tar Heels marched to an undefeated season and another national championship, Sumfest immersed herself in rehabilitation as well as becoming sort of a player-coach to the younger players who would be filling in for her on the back line throughout 2019. The added attention to detail brought to the unit by the injured Sumfest helped a young back line mature throughout the season and turn into a strength during North Carolina’s run through the championship tournament.

“The defensive line, I’ve played there for the past two years, so being able to talk to the younger girls and encourage them and be supportive of them,” Sumfest said of her role on the team in 2019. “It’s pretty scary stepping on the field that first time your freshman year and playing against elite teams so I know the feelings they have, so I just tried to be there and support them.”

Replacing Sumfest was not easy, but the Tar Heels made it work. During North Carolina’s title run in 2018, Sumfest led the team with four defensive saves and also scored three goals and had one assist from the back line. This season, North Carolina started Madison Orobono, a true freshman from Macungie, Pa. and Romea Riccardo, a redshirt freshman from Downington, Pa., in Sumfest’s absence. The veteran leadership displayed by Sumfest and senior back Ellen Payne helped turn Orobono and Riccardo into not just starters, but valuable pieces to the championship puzzle.

Now that the excitement surrounding the Tar Heels’ back-to-back championships has mellowed somewhat, Sumfest is focused solely on rehabilitation and returning to the field stronger and better than before.

“I just did a bunch of tests and my quad strength is almost 100 percent even and that’s a big factor in returning (from an ACL tear) to sports,” Sumfest said. “Hopefully, if everything keeps going as planned, I should be cleared (in December).”

The therapy and exercise surrounding her rehab has left her more focused and determined than ever, but it is the anticipation of being back out on the field with her team going for the elusive three-peat that fuels Sumfest through those grueling workouts. As circumstance would have it, Sumfest was also aided and motivated by a teammate who had suffered a similar injury, just days after her own.

“I am very motivated (to get back for next season),” Sumfest said. “Another girl on my team, Ali Rushton, this is her second (ACL) tear and she did it about a week apart from me and we did everything together. We would wake up early and go work out before class. Then we would go to rehab after class and then go to practice. It was a lot of time I put to make sure I could get back as soon as possible. She has been through it and when I had my ups and downs, she was there to help me get through it.”

The goal now, for both Sumfest and the Tar Heels, is to capture a third straight national championship, something no team has done since Old Dominion took home three straight titles from 1990-92. The achievement would be particularly satisfying for Sumfest following her injury and she believes that this current edition of the Tar Heels has the on-field talent and mental make-up to equal ODU’s feat.

“It was the same mentality with this team (this year) as last year, we finished the celebrations — we were just honored at the basketball game — and afterward, everyone just looked at each other and said, ‘Alright, let’s do it again next year,’” Sumfest said. “I think that mentality has been huge for us, but we don’t expect anything. We do the hard work to get back to that spot, to have a chance to do it again.”

While the injury has been a new and sometimes trying experience for her, Sumfest ultimately believes that the initial setback will not only make her a stronger player on the field, but a stronger and more motivated person off of it.

“I never took for granted practices or being able to play the game, but some days you’re just tired and don’t want to get out there and do the work,” Sumfest said. “After this, I want to go out there every day, I want to do as much as possible and it just kind of fires me up more. I want to be better than I was when I come back.”