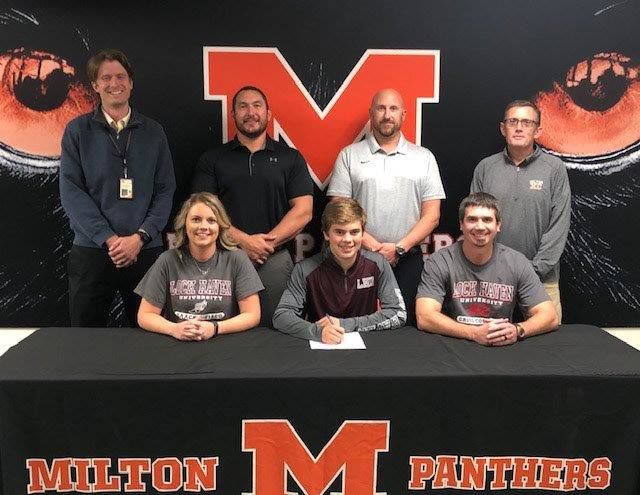 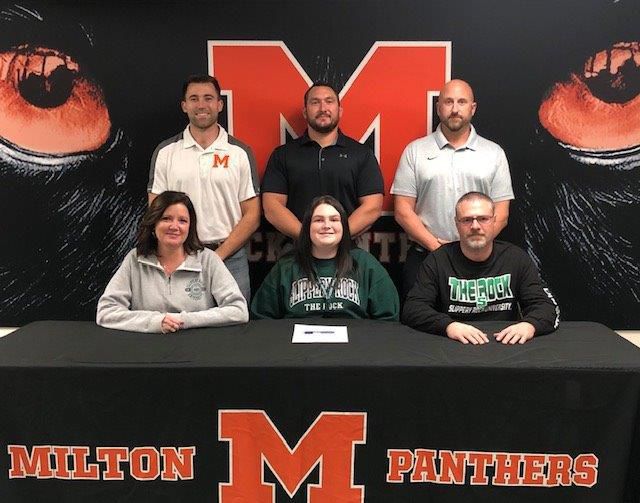 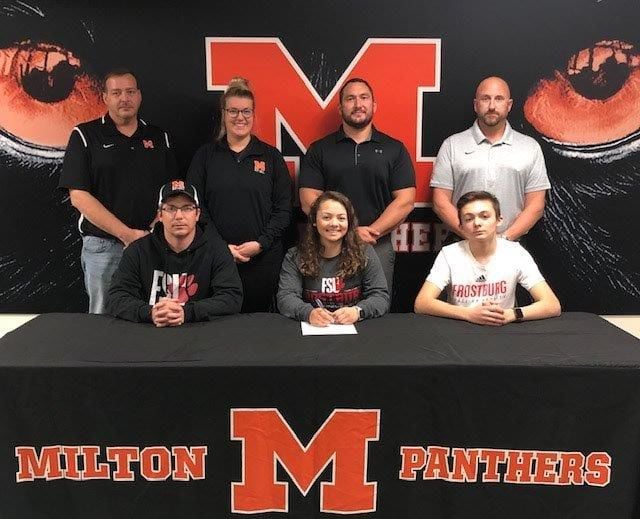 MILTON — The wave of area student-athletes signing their national letters of intent continued late last week when three from Milton — Tanner Walter, Kamryn Snyder, Austin Swallow — all put their signatures on the dotted line to attend the college of their choosing.

This past spring at the District 4 Class 2A track and field championships, Walter placed fifth in the 3,200 relay in 9:45.22 to qualify for the PIAA meet. Then once at states, Walter placed fifth again in 9:32.37 — almost 13 seconds faster than his seed time from districts — to earn a medal for Milton.

More recently, Walter completed his final year of cross country with a fourth-place finish at the D-4 2A meet in 16:48 prior to taking 69th in the state meet (17:31.7) earlier this month.

Snyder will also be continuing her track and field career at the next level — at Slippery Rock University — which is where Milton athletic director Rod Harris went to school.

The fact Snyder will also become a member of the Rock pleases Harris, her track coach.

“I was very happy for Kam, and proud of her for earning a spot at the next level and to be able to compete. It’s also my alma mater, so that makes it even more cool,” said Harris. “I was super-excited for her that she finally made the decision and committed.”

For Snyder, it was an easy decision to go to Slippery Rock.

“My decision to attend Slipper Rock was very easy. I went on a visit during the first week of November and it immediately felt like home to me,” she said. “It was such a relief getting all the paperwork finished and turned in. I was so happy that signing day had come, that the morning of the mock signing I was dancing around in my kitchen.”

Snyder will be competing in the shot put, discus and hammer throw for the Rock next year.

Back in the spring Snyder won the shot put at the District 4 Class 2A championships with a heave of 36 feet, 8 inches. Then at states she placed 14th in the shot with a throw of 36-11.

Snyder, who also finished second in the shot put at districts in 2018, took third in the discus that same year. Her best throws in the shot and discus are 39-feet and 111-3, respectively.

That multi-dimensional ability for Snyder provided a good deal of points for the Black Panthers in dual meets the past three years, and it will also serve her well at Slippery Rock according to Harris.

“Kam is a huge asset to our team as she scores major points every dual meet and helps to win many meets for us,” said Harris. “She absolutely will compete right away. SRU is a great track and field school that will definitely take care of her and push her to be the best form of herself that she can be.

“Slippery Rock does a great job developing their young talent each and every year,” added Harris. “The other great thing about the Rock is that their staff is consistent and have been there for many years. They are not rotating coaches every couple of years.”

Snyder, however, is just looking forward to a more relaxed and less intense spring and her final year competing in the field for the Black Panthers’ track team.

“The 2020 track season for me is going to be laid back, yet I will work as hard as I can to strive toward my goal of 40 feet (in the shot put),” said Snyder. “I am trying not to be too goal oriented this season, and to focus on my technique. I also need to keep strengthening my knee so I can be fully prepared for a successful season (next year for Slippery Rock).”

Swallow, as a junior, was one of the highlights of a senior-laden Milton softball team back in the spring. Now, she’ll be taking her talents to Division III’s Frostburg State University.

Last season Swallow batted .304 and had a .316 on base percentage. She had 17 hits (in 56 at-bats) plus three doubles, two triples and two home runs. Swallow also totaled eight runs scored and seven RBI for the Black Panthers.