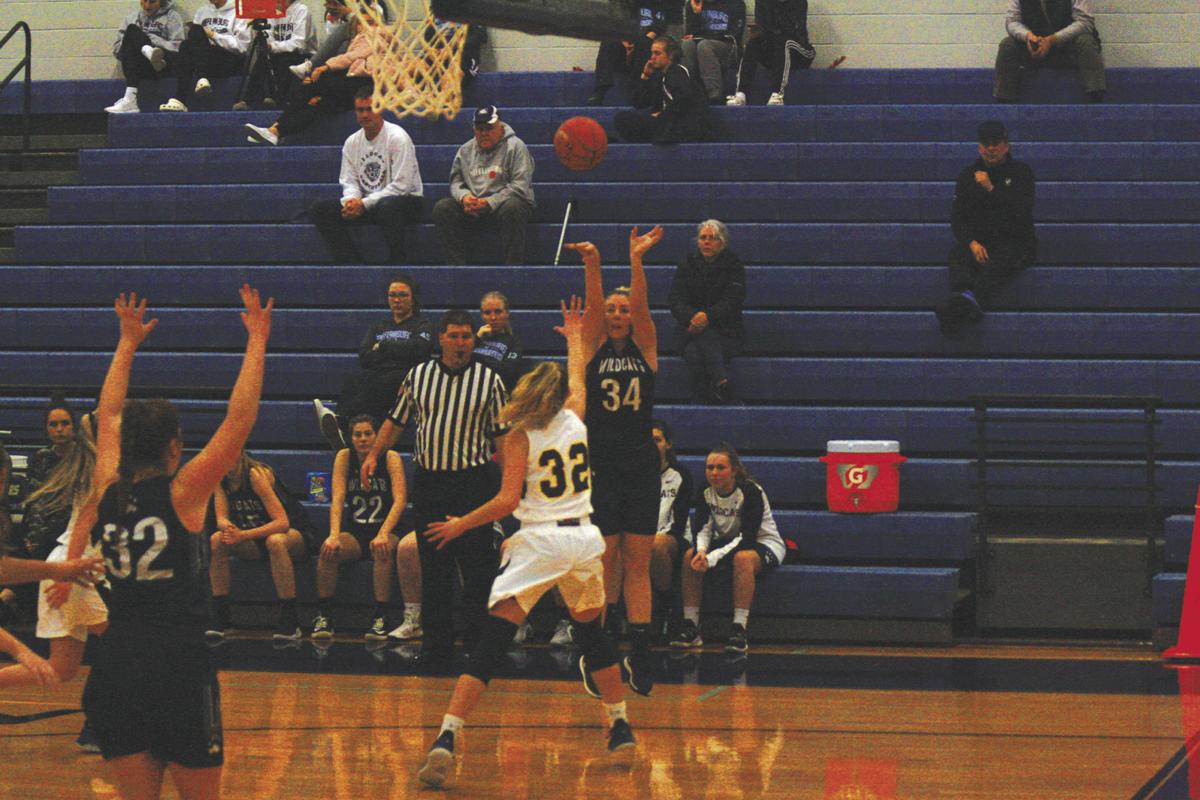 Mifflinburg guard/forward Mara Shuck knocks down a 3-pointer in the fourth quarter of the Wildcats’ 54-51 win over Montoursville on Monday. Shuck scored nine points and grabbed nine rebounds in the contest. 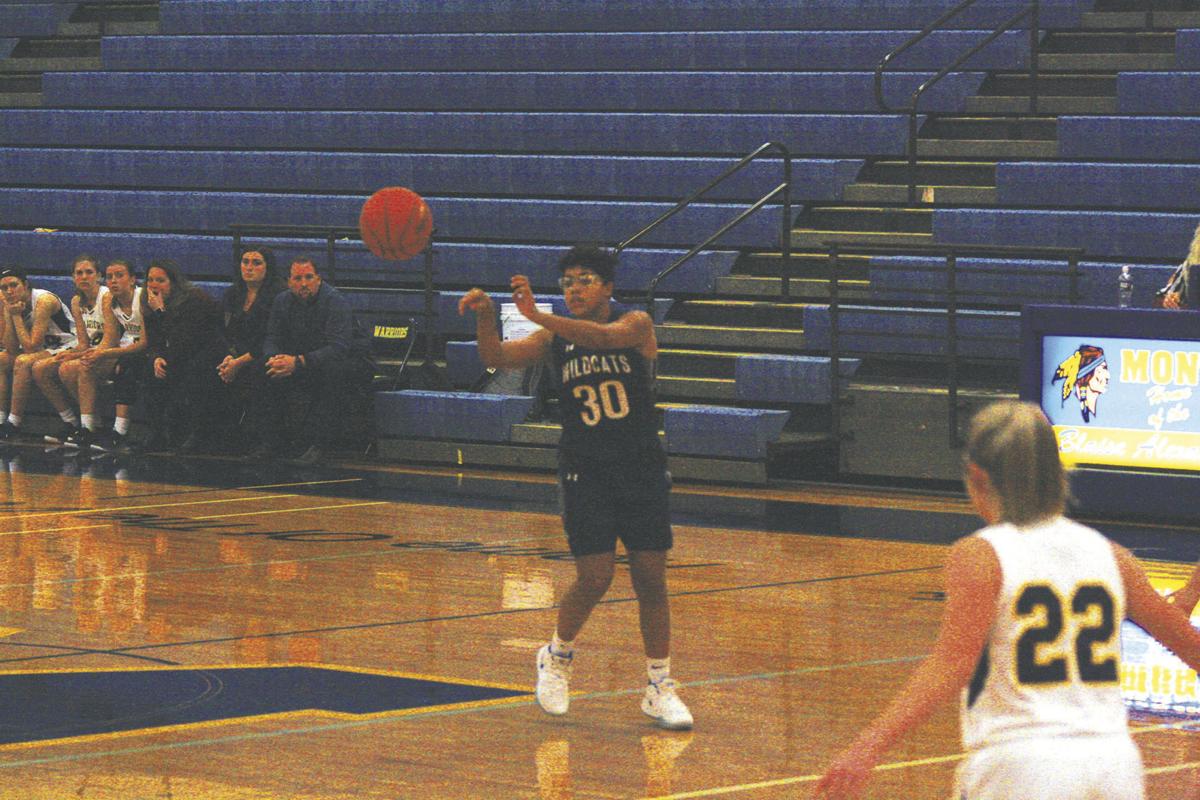 Mifflinburg point guard Angela Reamer fires a crosscourt pass in the third quarter of the Wildcats’ 54-51 win over Montoursville on Monday. Reamer had nine points and three assists in the game.

Mifflinburg guard/forward Mara Shuck knocks down a 3-pointer in the fourth quarter of the Wildcats’ 54-51 win over Montoursville on Monday. Shuck scored nine points and grabbed nine rebounds in the contest.

Mifflinburg point guard Angela Reamer fires a crosscourt pass in the third quarter of the Wildcats’ 54-51 win over Montoursville on Monday. Reamer had nine points and three assists in the game.

MONTOURSVILLE — On the road and down by 12 points early in a crucial midseason game, Mifflinburg girls varsity basketball head coach Kris Shuck called a timeout with 5:32 left in the second quarter.

The goal was simple. Get to within two points by halftime.

The Wildcats responded and did their coach three better as Mifflinburg held a 25-24 lead at the break. It was a theme which repeated itself often throughout Monday night’s HAC crossover game between the Warriors and Wildcats. Each time Montoursville seemed to take control of the game, Mifflinburg found a way to answer.

“I expected it to be that tight,” Shuck said. “I know that (Montoursville’s) record probably doesn’t indicate how well they’ve been playing recently. They’ve lost some close ones here of late so I told the girls that it was going to be a challenge. We’ve been struggling to put a full game together ever since the start of the season. That’s something that we’ve been stressing, to put four quarters together. They would get up on us a little bit and we would respond and that’s a stride in the right direction.”

The Wildcats trailed by four at the end of the first quarter, 11-7 and Montoursville came out firing to start the second. The Warriors went on an 8-0 run thanks to 3-pointers by MacKenzie Weaver and Madalyn Adams and opened up a 19-7 lead.

The 12-point advantage was the largest lead by either team in the game, but the Wildcats came roaring back with an 18-5 lead to close out the first half.

Mifflinburg junior power forward Brooke Catherman scored 10 points in the second quarter and went 6-for-7 from the free throw line in the period. The Wildcats also got four points apiece from senior guard/forward Mara Shuck and four more from freshman guard/forward Ella Shuck.

“That was huge,” Shuck said. “We took (another) timeout when we were down eight at 23-15 with three-and-a-half minutes to go and I told them that we wanted to get it within two at the break. That was huge, to kind of build the momentum for us coming out in the third quarter in a back-and-forth game.”

The teams played an even third quarter (12-12) and each had four-point leads at various stages of the fourth quarter, but ultimately Mifflinburg was able to claw back on top late in the game and the Wildcats were able to convert their free throw attempts to seal a close victory.

“We executed correctly in the fourth quarter there at the end and we hit some foul shots late, which we’ve been struggling to do recently,” Shuck said. “That’s what we harp on as a coaching staff, that you have to hit foul shots to win close games. You can win games (at the free throw line). It’s something where we’re not where we want to be as a team in terms of consistency for the season, but tonight we were able to make them in key moments.”

Ella Shuck finished with a team-high 15 points, including six in the fourth quarter. Shuck also contributed three rebounds, two steals and a team-best four blocked shots. Catherman added 12 points, four rebounds and two assists while Mara Shuck and point guard Angela Reamer both scored nine points in the victory. Reamer played especially well in the third quarter when she scored seven points and came up with a couple of big steals. Mollie Bomgardner added seven points and both she and Mara Shuck tied for the team lead with nine rebounds.

For Montoursville, which hit 11 threes as a team in the loss, Adams led all scorers with 20 points and Weaver added 19. Marchioni added 10 points, but only one other Warriors player, shooting guard Mackenzie Cohick, scored in the contest. Cohick played a solid all-around game for the home team and though she scored only two points, led the Warriors with nine rebounds, five assists and six steals.

With his team’s record now evened at 7-7, Shuck likes the Wildcats’ current direction.

“We only have eight more games to go in the regular season and the games are going to start getting harder because everyone is starting to play better,” Shuck said. “We’re right back in action (Tuesday) night so it’s huge for us to come up here and get this win. This is a big one for us tonight.”

Mifflinburg will be back in action this evening with a home game against Shamokin. Game time for the HAC crossover contest between the Wildcats and Indians is scheduled for 7:30 p.m.