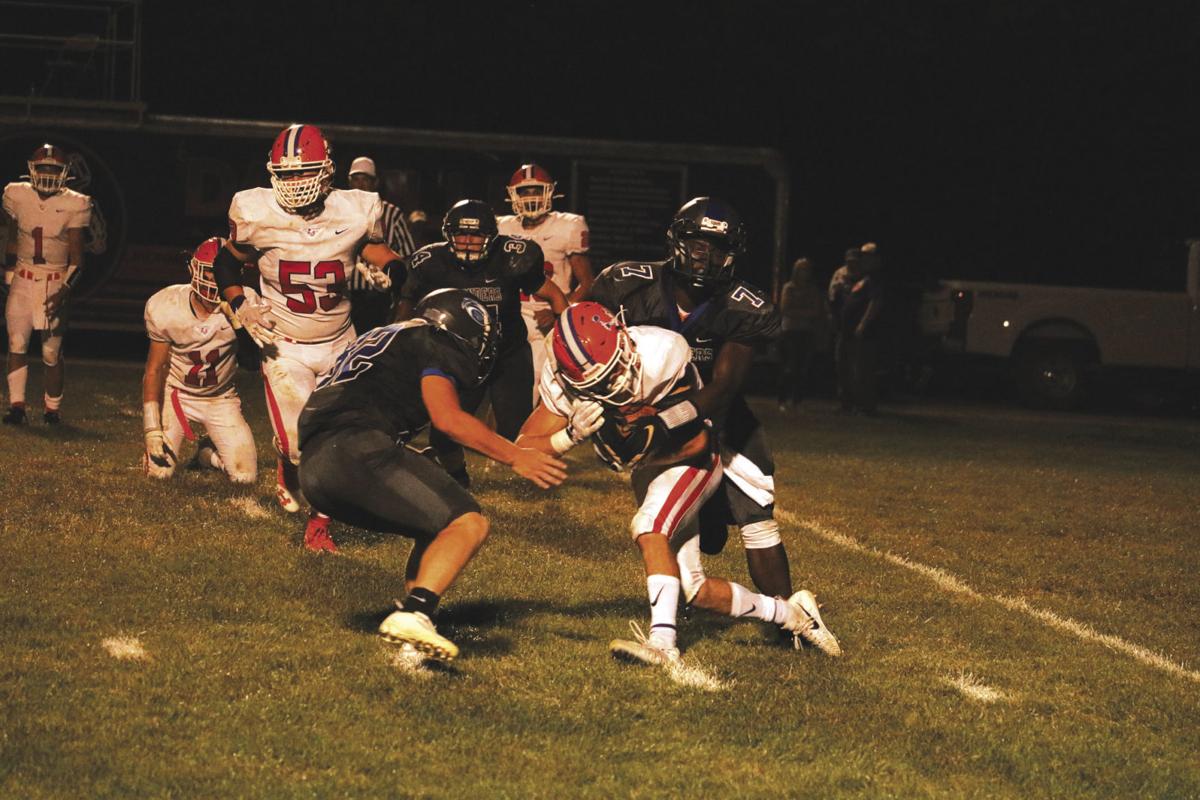 Warrior Run senior defensive end Ahmahd Keyes (7) has been a brick wall on the the defensive line for the Defenders (7-4) throughout the season. Keyes had two sacks and a forced fumble in Warrior Run’s 28-7 victory over No. 5 Lewisburg last week. 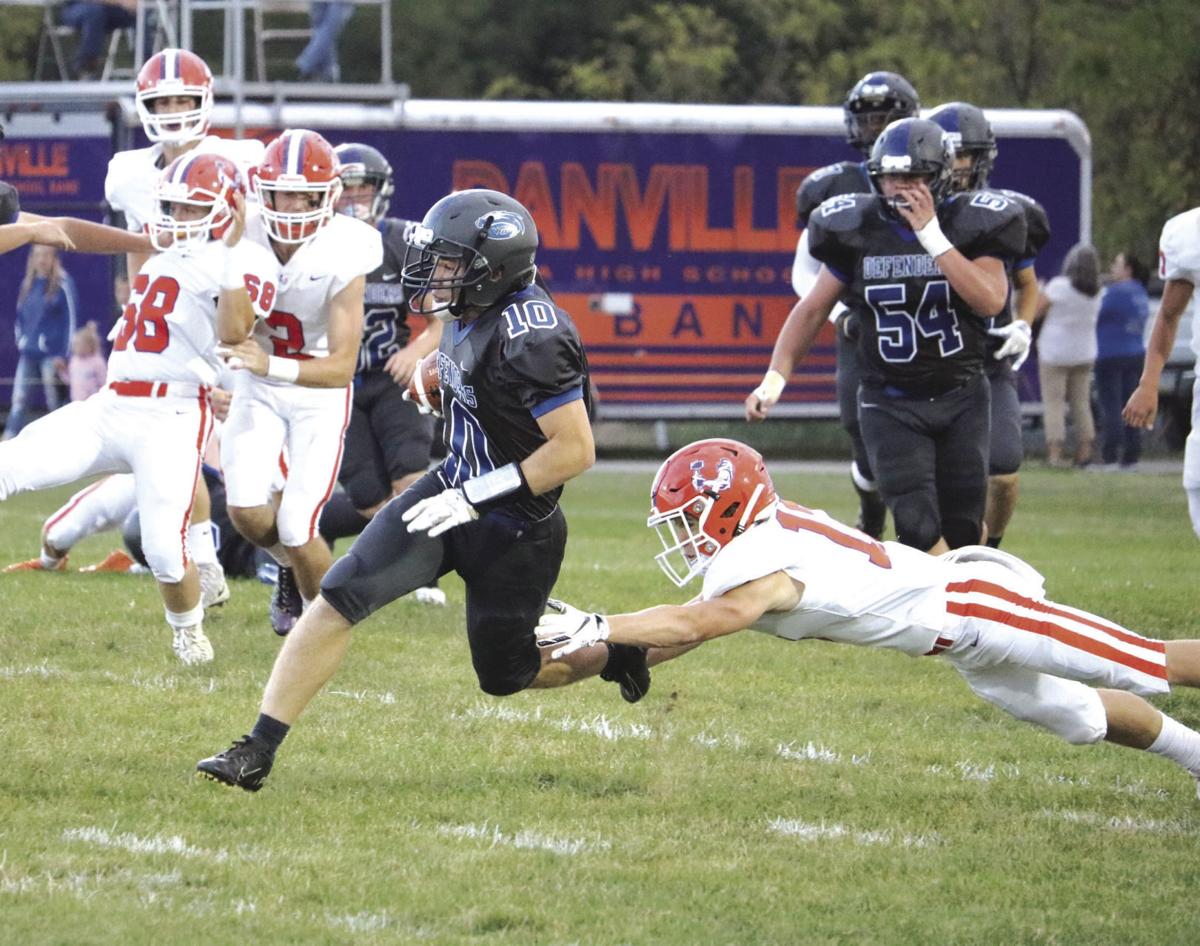 Warrior Run wide receiver Riley Daubert set school records for receiving yards and receiving touchdowns in a career with his performance last week against Lewisburg when he hauled in four catches for 148 yards and two touchdowns in the Defenders’ 28-7 victory.

Warrior Run senior defensive end Ahmahd Keyes (7) has been a brick wall on the the defensive line for the Defenders (7-4) throughout the season. Keyes had two sacks and a forced fumble in Warrior Run’s 28-7 victory over No. 5 Lewisburg last week.

Warrior Run wide receiver Riley Daubert set school records for receiving yards and receiving touchdowns in a career with his performance last week against Lewisburg when he hauled in four catches for 148 yards and two touchdowns in the Defenders’ 28-7 victory.

TURBOTVILLE — Sometimes in sports, belief is stronger than talent or tradition and the No. 4 Warrior Run Defenders believe that they can shock the world tonight against No. 1 Montoursville in the District 4 Class 3A semifinals.

Keyes had a monster game against the Green Dragons as Warrior Run collected a 28-7 victory and its initial playoff victory seven days ago.

The 6-3, 205-pounder was a terror on the defensive side of the ball as he collected two sacks and a forced fumble against Lewisburg. Keyes would have had a third sack and a second forced fumble late in the game against Lewisburg quarterback Nick Shedleski, but the referee ruled the play intentional grounding which resulted in a turnover on downs for the Green Dragons and effectively ended the game.

“We just keep playing and if one of us makes a mistake, we believe in one another so much that we just pick each other up because we know that guy will never make that mistake again,” Keyes said. “We build off of that.”

On the road, uncharted waters

Keyes and his teammates are in unfamiliar territory as they head to Montoursville tonight. In fact, the 19 seniors on this Warrior Run team could only dream about a moment like this when they were growing up.

“I’ve been around the school (and football program) for a long time and it’s just a joy to see how far they’ve come,” Warrior Run head coach Chris Long said. “They’ve worked so hard for this moment. To get to seven wins this season after so many years of two, three, four wins, and now we’re guaranteed another week, that means everything to these seniors and this team.”

The Defenders made the playoffs a year ago with a 3-7 record and suffered a quarterfinal round defeat to Danville, something which Long believes has been a valuable learning experience.

“We got into the playoffs a year ago with three wins and we treated that (quarterfinal round) game against Danville as an extra week of practice and I think we really built off of that heading into this season,” Long said. “I really believe that, I think we took the lesson of that game and we really continued to build off that throughout summer practices and again, early this season and it has helped us get to the point where we’re at right now.”

Corderman, Daubert poised to add to historic numbersAgainst Lewisburg, seniors Remington Corderman and wide receiver Riley Daubert continued their dominance in the passing game as the two hooked up four times for 148 yards and two touchdowns in the 28-7 victory over the Green Dragons.

The outcome — and the proficiency of the best passing duo in school history — was not a surprise to anyone who has seen Corderman and Daubert play together in 2019. The two seniors have an uncanny ability to know what the other is thinking, especially at crucial times during the game.

Daubert scored on receptions of 42 and 65 yards respectively, and Long knows that his big play combination must hit on at least a couple of plays tonight to give the Defenders a fighting chance against the No. 5-ranked Class 3A team in the state of Pennsylvania.

“I think the running game helps Remington when it’s working and when he has that extra time back there, he can find a kid like Riley who can take a five-yard pass and turn it into a 50-yard touchdown,” Long said. “They have good communication at the line of scrimmage — if Remington sees something in coverage, he and Riley have a little hand signal worked out — and it can turn into a big play because they are so comfortable with one another. It’s happened multiple times this year.”

O-line primed to be an x-factor against WarriorsOn the offensive line, a senior-laden group with plenty of experience laid the wood to the Green Dragons and opened up holes for Denver Beachel and Hoyt Bower, though the Defenders only averaged 3.0 yards per carry in the win against Lewisburg.

One would believe that the sledding would be that much tougher against Montoursville, which has only given up crumbs to opposing rushing offenses this season.

Still, Long knows that if his offensive line can do enough to keep the chains moving, Warrior Run will have a chance to win.

“That’s a veteran group and they have been solid all year long for us,” Long said. “I’m really pleased with where they are right now. These guys are playing tremendously right now. They take coaching well and they want to get better at playing the offensive line. They’re not looking for any glory, they’ve been a very selfless group.”

The Defenders know that they have a huge challenge in front of them tonight in every facet of the game, but that won’t deter the team from Turbotville from giving their collective all this evening against the Warriors.

Back on Sept. 13, Warrior Run gave Montoursville its stiffest test of the season to that point before the Defenders ultimately fell on the road, 28-7.

Despite the odds, Keyes and his teammates believe.

“All it takes is one stop, one play,” Keyes said. “We build off that. We pick each other up. We believe in each other. We know we can make great things happen as long as we continue to do that.”