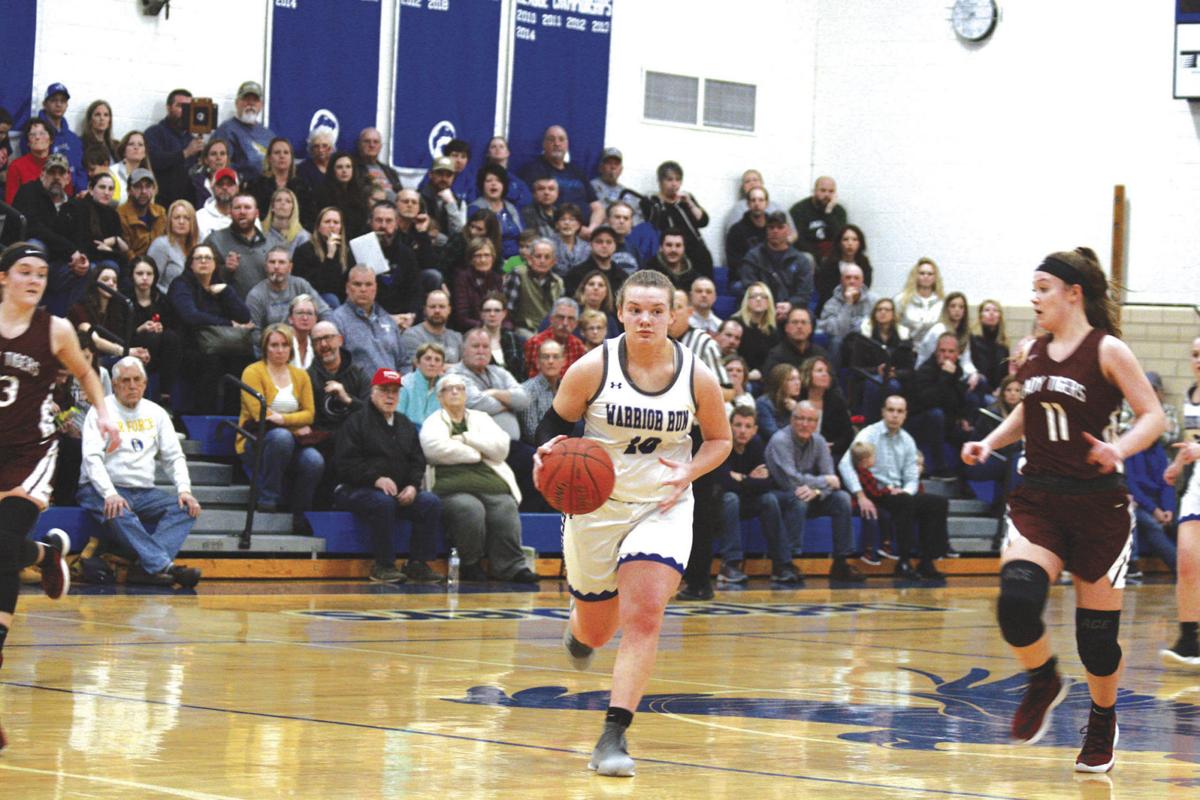 Warrior Run’s Sydney Hoffman pushes the ball up the court in the fourth quarter of the Lady Defenders’ 38-36 playoff win over East Juniata Friday night. Hoffman scored all of her team-high 12 points in the second half and also grabbed a game-high 13 rebounds. 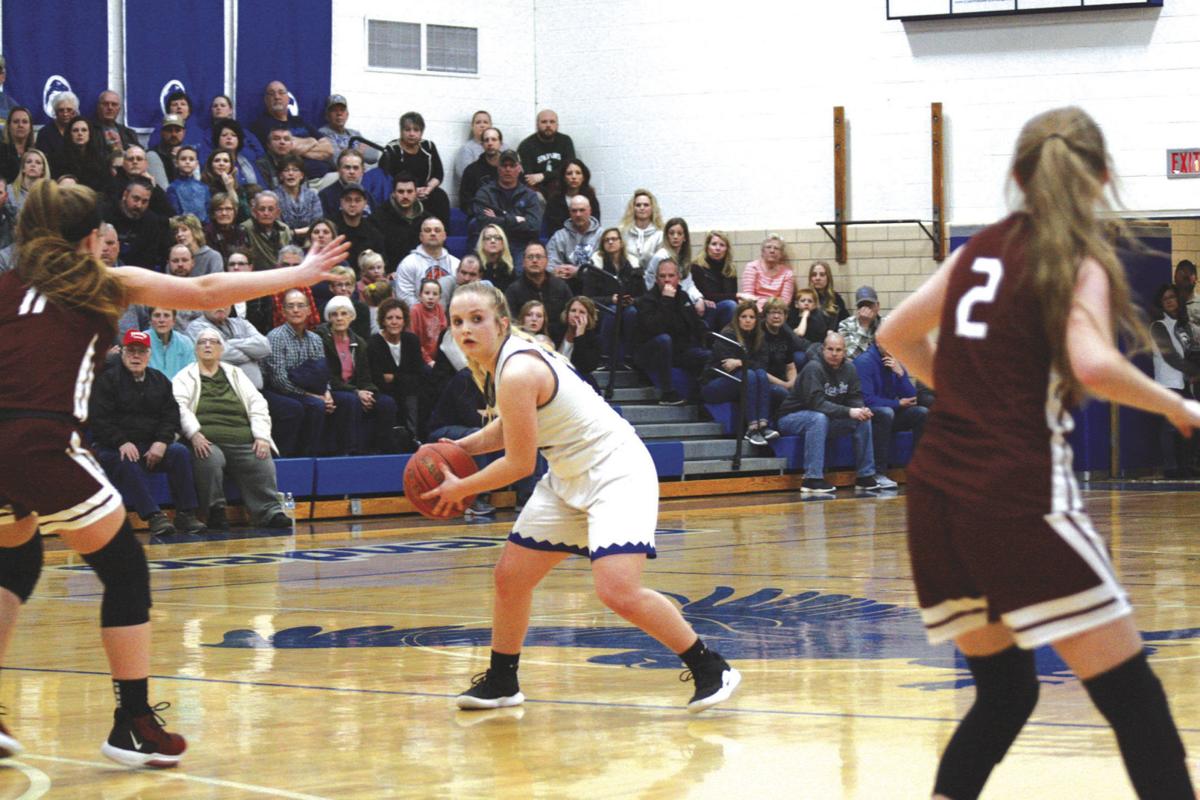 Warrior Run guard Gracy Beachel looks to pass in the fourth quarter of the Lady Defenders’ District 4 Class 3A playoff game against East Juniata Friday night. Beachel hit a game-tying 3-pointer with under a minute remaining to help her team to a 38-36 victory.

Warrior Run’s Sydney Hoffman pushes the ball up the court in the fourth quarter of the Lady Defenders’ 38-36 playoff win over East Juniata Friday night. Hoffman scored all of her team-high 12 points in the second half and also grabbed a game-high 13 rebounds.

Warrior Run guard Gracy Beachel looks to pass in the fourth quarter of the Lady Defenders’ District 4 Class 3A playoff game against East Juniata Friday night. Beachel hit a game-tying 3-pointer with under a minute remaining to help her team to a 38-36 victory.

TURBOTVILLE — All year long, the Warrior Run girls varsity basketball team has been a “second-half team” and the No. 3 Lady Defenders (16-7) took that description to the extreme Friday night against No. 6 East Juniata (15-9) in the District 4 Class 3A quarterfinals.

Trailing 32-20 with 6:14 remaining and playing without sophomore forward Emily McKee, Warrior Run first-year head coach Rachael Herb called a timeout and provided the gut check her squad needed to pull off one heck of a comeback against the visiting Tigers and gut out a gritty, 38-36 victory.

While almost nothing had gone right for Warrior Run up to that point, everything went the Lady Defenders’ way following the critical timeout.

“Again, that’s Warrior Run basketball, we come from behind,” Herb said. “Give the girls credit, this was, to me, the first game of a new season. We lost a very important key to our team, one of our main scorers and one of our biggest rebounders (in McKee) and for them to come in and have to handle that challenge the way that they did, I’m very proud of them. Our shots don’t often drop in the first half and when they don’t, we start to look inside. Tonight, we didn’t have that inside presence and the girls just found a way to get through it, stay composed and just keep shooting the ball.”

The Lady Defenders struggled from the opening tip and turned the ball over six times in the first quarter while scoring only six points in the frame. It was a theme which would repeat itself until the final six-plus minutes of the contest. Before the Lady Defenders made their improbable run to victory, they had more turnovers (21) than points (20).

Junior captain Sydney Hoffman also struggled until the final frame as it was evident she was pressing and trying to do too much in McKee’s absence. Hoffman turned the ball over several times in the first half and was held scoreless in the first 16 minutes of play, something which hadn’t happened all season. Hoffman continued to labor in the second half and though she got her first field goal of the game late in the third quarter, she had trouble finding a consistent scoring touch.

Following a play in the paint during which she was clearly fouled with no call which ended up resulting in a turnover that East Juniata’s Thea Neimond took the other way for a lay-up attempt which resulted in free throws, Hoffman became visibly upset. Herb quickly subbed Hoffman out and took a knee in front of her and addressed her during Neimond’s free throws. Following Neimond’s make on the second attempt, Hoffman re-entered and along with senior guard Gracy Beachel, took over the game for Warrior Run. The 30-second break was just enough time for Herb to help Hoffman to hit the reset button mentally and help her to realize that there was still enough time remaining to come back.

“She’s the leader on the floor and I need her head to be in the game because when Syd goes, everybody goes and that’s a tough position to be put in as a junior when I’m asking her to do so many things,” Herb said. “I’m asking her to run point, I’m asking her to play defense underneath. Plus, on top of that, I’m asking her to score. I think for her, sometimes she needs a second because it’s an emotional game and she’s into it, 100 percent, all the way and I couldn’t ask for a better player to do all those things, but sometimes for her, it’s taking that time to sit down and for her to realize that her team needs her more on the floor than they do on the bench. Sometimes her sitting there gives her perspective on why we need her (on the court) and why we need her to stay in control.

Hoffman, who finished with a team-high 12 points — all in the second half — and a game-high 13 rebounds to go along with four steals and two assists, agreed with her head coach’s assessment.

“It’s high school basketball and sometimes, we get emotional, but coach does a really good job of calming us down,” Hoffman said. “She knows what we need to be able to be at our best when it matters the most and obviously at the end of the game we were at our best and that’s what we want to do. The end result is what matters.”

The Tigers held a 16-13 lead at halftime and stretched the advantage to five points at the end of the third quarter, 25-20. Until the fourth quarter, neither team had recorded a period with double figures in the scoring column, but both squads played their best quarter of the night in the fourth.

Neimond dropped in seven of her game-high 15 points in the final frame, but was just 1-of-5 from the line in the period and East Juniata struggled from the charity stripe down the stretch and in the contest as a whole as they hit just 4-of-12 free throw attempts.

Hoffman scored 10 of her team-high 12 points in the final frame and also ripped down five rebounds. Beachel scored five points in the fourth quarter, including a huge, game-tying 3-pointer with 47.8 seconds remaining. Hoffman assisted on the bucket and reflected on the moment after the game.

“I knew once I got the pass off (to Beachel) and saw that no one was there that she would hit that three, she’s done it multiple times for us this season,” Hoffman said. “We grew up together and for her to have that moment right there, that was really special for me as a teammate.”

Following Beachel’s big triple, the Tigers missed a lay-up at the other end which Hoffman corralled. After the rebound, Hoffman was fouled and able to pick herself up off the court and knock down the eventual game-winning free throws with just 27.8 seconds left on the clock.

“I got fouled on the rebound and as soon as I hit the ground, I heard my teammates screaming at me to get up and knock (the free throws) down because we really needed them,” Hoffman said. “That really pumped me up. We practice them every day and I was able to hit them.”

Warrior Run now moves on to face No. 2 Bloomsburg at a time, date and place to be announced. The Lady Defenders will have to do it again without McKee and her 16.1 points per game as Herb confirmed after the game that her sophomore big is indeed out for the remainder of the season with a knee injury.

Still, Hoffman believes that the journey for her and her teammates is far from over.

“Without Emily, it took us that long to figure out our roles because obviously she’s a key piece of our team and it’s really tough to lose her, but I think we came on strong at the end there and hopefully we come out strong against Bloomsburg next week,” Hoffman said.