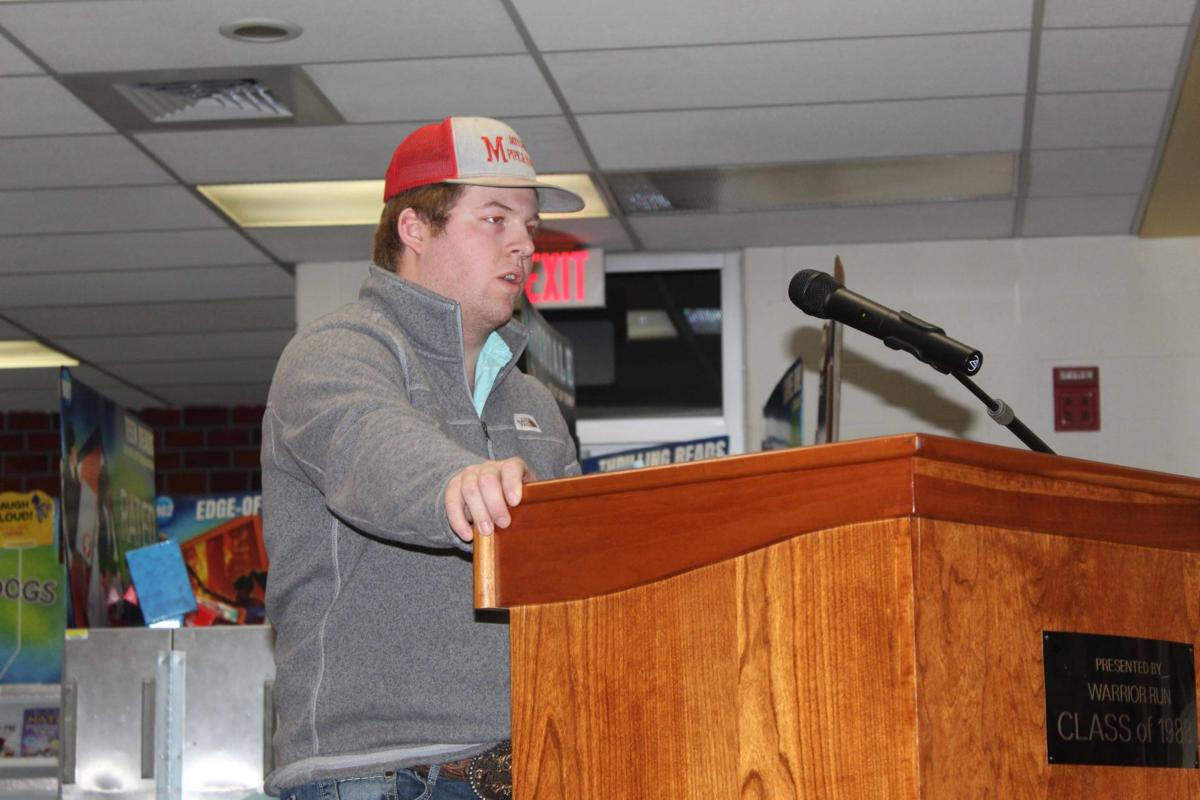 Zane Kilgus, a senior enrolled in Warrior Run’s cyber school, spoke on the benefits of the program during Monday’s school board meeting. Kilgus travels the country participating in rodeo events. 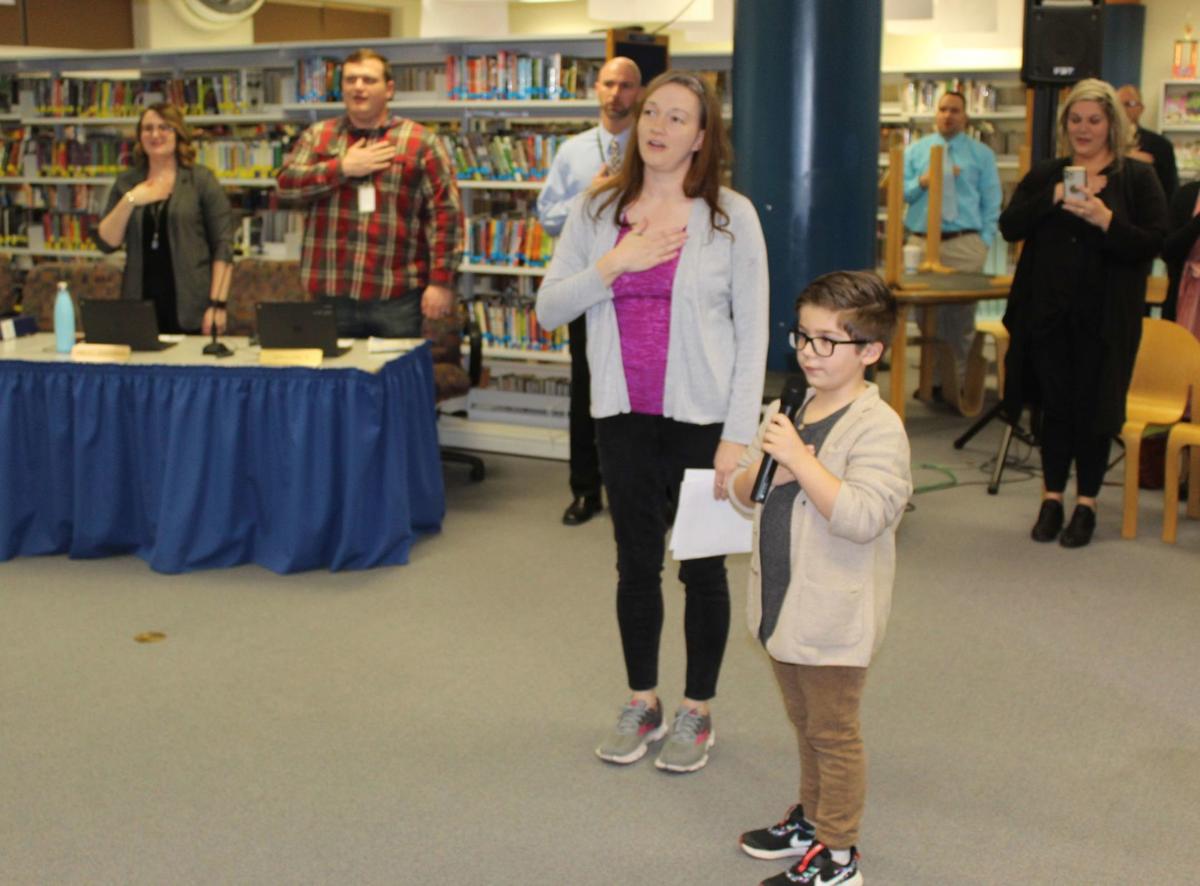 Noahm Dahan, a first-grade student, was named February Citizen of the Month in the Warrior Run School District. He led the Pledge of Allegiance during Monday’s school board meeting. Board Vice President Tamara Hoffman stood next to Dahan.

Zane Kilgus, a senior enrolled in Warrior Run’s cyber school, spoke on the benefits of the program during Monday’s school board meeting. Kilgus travels the country participating in rodeo events.

Noahm Dahan, a first-grade student, was named February Citizen of the Month in the Warrior Run School District. He led the Pledge of Allegiance during Monday’s school board meeting. Board Vice President Tamara Hoffman stood next to Dahan.

TURBOTIVLLE — The Warrior Run School District’s project to build a 99,200-square-foot elementary school — estimated to cost between $35.3 and $38.7 million — could be placed out to bid by December.

The school board on Monday approved the new elementary school design development documents and estimate for the cost of the work. At the same time, the board authorized Breslin Ridyard Fadero Architects to proceed with preparing the construction documents.

Following the meeting, Superintendent Dr. Alan Hack said the new elementary school to be built on the grounds of the middle school/high school complex is still proposed to be three stories. He said it will take about nine months to prepare the construction documents, after which time the project will be ready to be placed out to bid.

If the project continues on schedule, Hack said groundbreaking should occur in the spring of 2021, with the project to be completed by the fall of 2022.

During the meeting, board President Doug Whitmoyer questioned whether the project’s soft costs will fall between $2.9 and $3.3 million, as estimated by the architectural firm.

Michael Bell, of Breslin Ridyard Fadero Architects, participated in the meeting via phone. He said that is an accurate project of soft costs, which include permitting and legal fees, as well as geotechnical studies.

In other business, the board approved transferring $1.5 million from the general fund to the capital reserve fund. It was noted that the funds are from the 2019-2020 line items designated for the building project, including debt service, capital reserve transfer and bond interest.

Hack noted that the money does not represent a surplus to the district.

The board also approved the Central Susquehanna Intermediate Unit’s (CSIU) $886,527 general operating budget. Hack noted that the district will only be responsible for paying CSIU $196 for the Guest Teacher Program which it participates in, as well as any services the district opts to purchase from CSIU.

Board member Gail Foreman said high school administrators have been tasked with developing a dress and public displays of affection code for school dances. She and Whitmoyer said the policy is being crafted in response to multiple complaints received following a recent dance.

Principal Marc Walter said he is in agreement that the district needs to strengthen its dress and behavioral code for dances. Meredith Gardner, a senior who attended the meeting, said the majority of the student body is also in agreement that a more definitive code needs to be crafted.

The board heard from Zane Kilgus, a senior enrolled in courses through Warrior Run’s cyber school in order to accommodate his schedule traveling the country participating in rodeo events.

Kilgus said he has taken online courses through Warrior Run since seventh grade and he intends to participate in commencement ceremonies.

“It’s been really good to me since seventh grade,” Kilgus said, of Warrior Run’s cyber program. “There’s a lot of times in the spring and in the fall that I’m 2,000 miles away from here (and can still complete coursework).”

At first, he said it took some time to adjust to taking courses online, but he was able to adapt.

“I tried to always stay ahead or at least on pace (with the work),” Kilgus said.

He anticipates receiving a full scholarship to participate in a collegiate rodeo program. He has not yet made his final selection on which school he will attend, but he plans to major in equine ranch management.

• The retirement of Dolly Anderson, a second-grade teacher, effective at the end of the 2019-2020 school year.

• Purchasing a 2020 Wells Cargo Trailer from Carrs Trailers and Supplies at a cost of $5,310.95, to be reimbursed by the Band Parents Association.

• Purchasing 146 wireless access points from ePlus Technology, at a cost of $128,313.34, with approximately $88,000 expected to be reimbursed through the federal e-rate program.

Noahm Dahan, a first-grade student, was named February Elementary Citizen of the Month. He led the Pledge of Allegiance during the meeting.