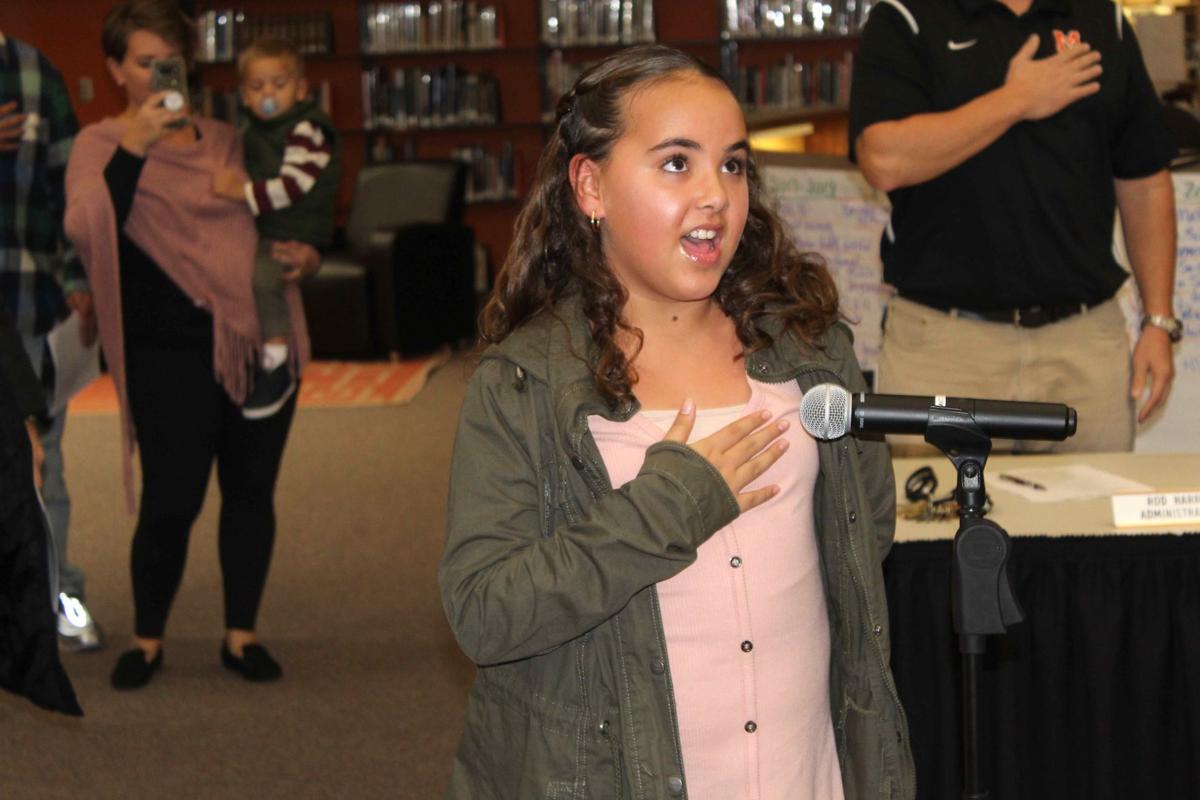 Kaydence Wilson, a fifth-grade student at White Deer Elementary School, was named November Citizen of the Month in the Milton Area School District. She led the Pledge of Allegiance at Tuesday’s school board meeting. 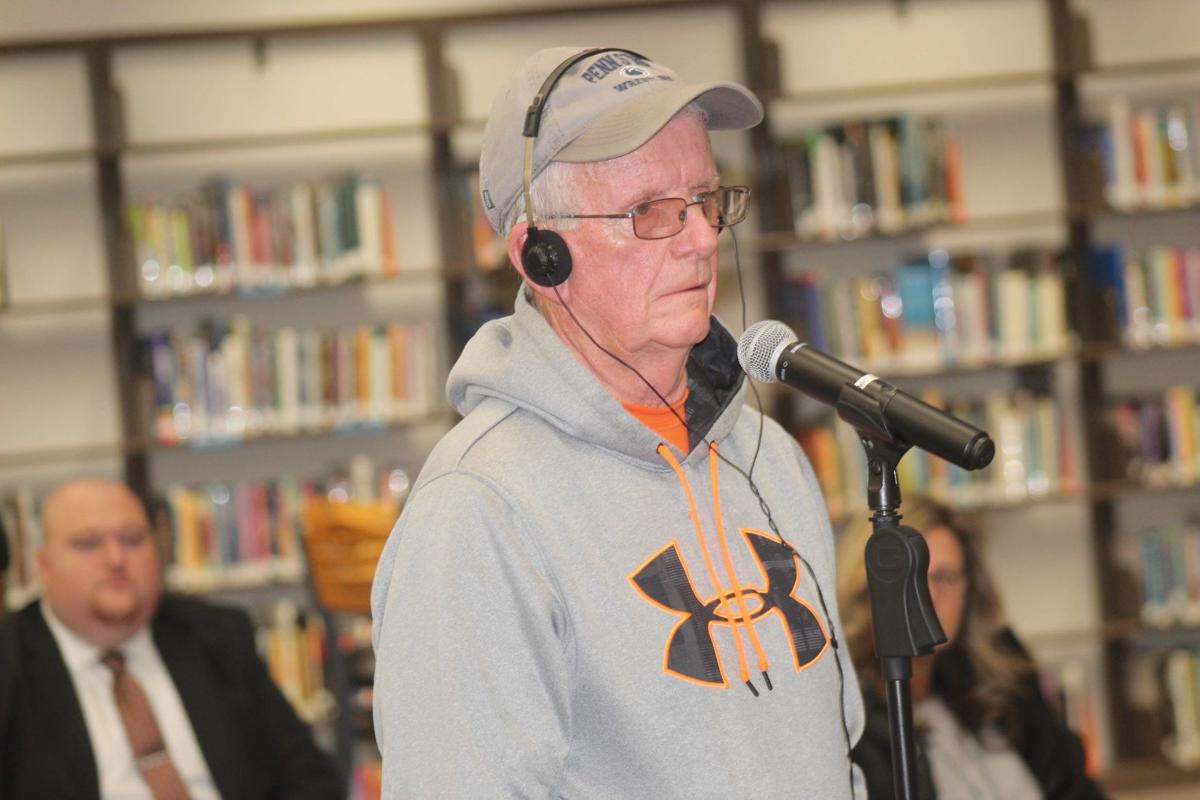 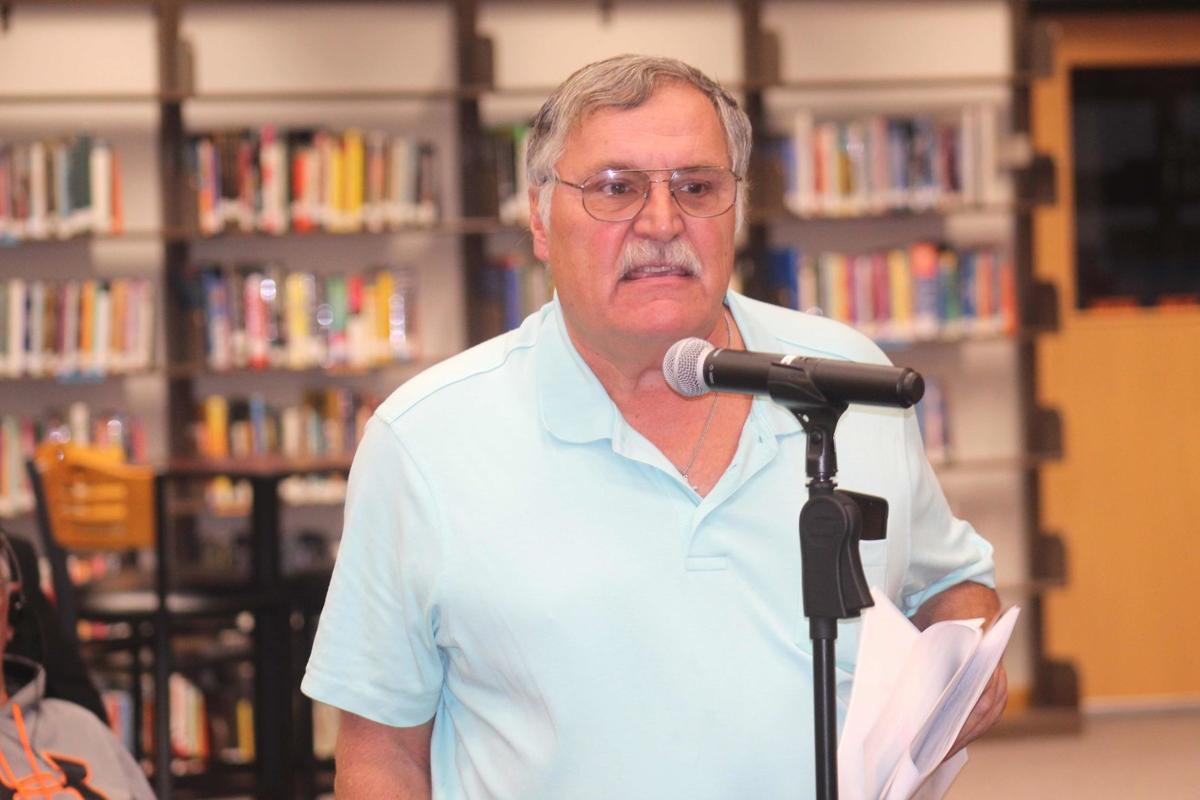 Randy Straub, of White Deer Township, expressed his opposition to the planned renovation and expansion of the Milton Area School District’s athletic facilities.

Kaydence Wilson, a fifth-grade student at White Deer Elementary School, was named November Citizen of the Month in the Milton Area School District. She led the Pledge of Allegiance at Tuesday’s school board meeting.

Randy Straub, of White Deer Township, expressed his opposition to the planned renovation and expansion of the Milton Area School District’s athletic facilities.

MILTON — In spite of pleas by two incoming board members to table the motions until the new board is seated in December, the Milton Area School District school board on Tuesday approved spending $12 million to renovate the high school track and football field, and add a physical wellness facility onto the rear of the high school.

The vote to renovate the athletic complex was unanimous.

At the opening of the meeting, Andrew Frederick and Ken Snyder both asked the board to consider tabling the motions until January. The two were recently elected to the board and will take office in December.

“Delaying these votes until at least January would not impact the ability to break ground,” Frederick told the board.

He said the decision to move forward with the project should be made by the next board, rather than by a board comprised of some members about to leave office.

“I am not advocating for or against the project,” Snyder said, adding that he would like to hear more details on the proposals. “I think there is a veil of uncertainty about the finances of the project.”

Edinger said Tuesday was the right time to move forward with the vote.

“This board, for over a year, has been working on this project, on the financials,” he said. “They are just as anxious for the work they have done.”

Hosterman, who participated in the meeting via phone due to being out of the country, echoed his support of Edinger’s statement.

“Our board… has done due diligence for well over a year to prioritize the physical needs of the district,” he said.

Following the meeting, Superintendent Dr. Cathy Keegan explained how the board pared down the athletic complex renovation project from the $7.8 million that was estimated at the October board meeting.

She also explained steps taken to reduce the price of the addition, which in October was estimated at $8.2 million for a 24,000-square-foot structure.

Keegan said soft costs and contingencies for the projects have been reduced by 10%.

In addition, the estimated cost of the concession stand and ticket booths for the athletic complex has been reduced from $1.5 million to $400,000.

“The initial (proposed) building was block and brick,” Keegan said, of the concession stand. “We’re now looking at a wooden structure.”

The facility is proposed to include a turf field, synthetic track and new bleachers.

She noted that the building expansion project includes renovating the existing high school locker rooms to become the new wrestling room. The expansion will include new locker rooms and a weight room. A proposed indoor turf room has been dropped from the project.

Keegan said ground should be broken on the athletic complex renovation project in the spring, with the work possibly being completed by the fall. The expansion is expected to take about two years to complete.

The board in August approved moving forward with a $10 million renovation project at Baugher Elementary School.

The board in July approved borrowing $9.9 million, to be used for renovation projects in the district. The district secured a 2.7 percent interest rate for the borrowing, which will be paid back through 2047.

Prior to approving borrowing those funds, Mellisa Hughes of PFM Financial Advisors said over the next three years the district will be borrowing $30 million and refinancing $4 million in existing debt for a variety of potential renovations projects highlighted in the district’s feasibility study.

Several community members spoke in favor of and against the proposed athletic projects during Tuesday’s meeting.

Pete Bergen, who has served as president of the athletic booster club for 30 years, said student athletes in the district are supportive of the project.

“I can’t express the excitement, from the elementary kids on up, about this athletic complex,” he said. “I’m so excited about this project… I want to see it come to fruition.”

Randy Straub, of White Deer Township, spoke in opposition to the project.

“I am very opposed to the amount of money we want to spend on sports,” he said. “I think this is outrageous. Every 10 years we will have to replace (the turf). At what cost?”

Straub asked when renovations to the White Deer Elementary School will be considered.

Rather than investing in sports, John Bower, of Milton, said he would rather see the district invest in its vo-tech program.

The board approved contracting Mericle Commercial Real Estate to market the former Montandon Elementary School building for sale. The school was vacated at the end of the 2018-2019 school year, with students and staff consolidated to Baugher Elementary School.

Paliulis and Everitt voted against contracting the company to handle the sale of the building. All other board members voted in favor of the motion.

The motion included the stipulation that the district will have the right to negotiate with any party which may come forward that’s interested in leasing the property.

It was noted that the meeting was the final one for Everett, Edinger and McNeal. They will be replaced in December by newly elected members Frederick, Snyder and Lindsay Kessler.

Edinger encouraged the oncoming board members to listen “before they give up their own ideas.”

He also blasted community members for taking to social media to criticize the district.

“The community, with the opportunity to go on Facebook, Twitter, they bring out some things that are not accurate,” Edinger said. “It’s shameful that we, as a human race, have been reduced to doing that.”

Kaydence Wilson, a fifth-grade student at White Deer Elementary School, was named November Citizen of the Month. She led the Pledge of Allegiance during Tuesday’s meeting.