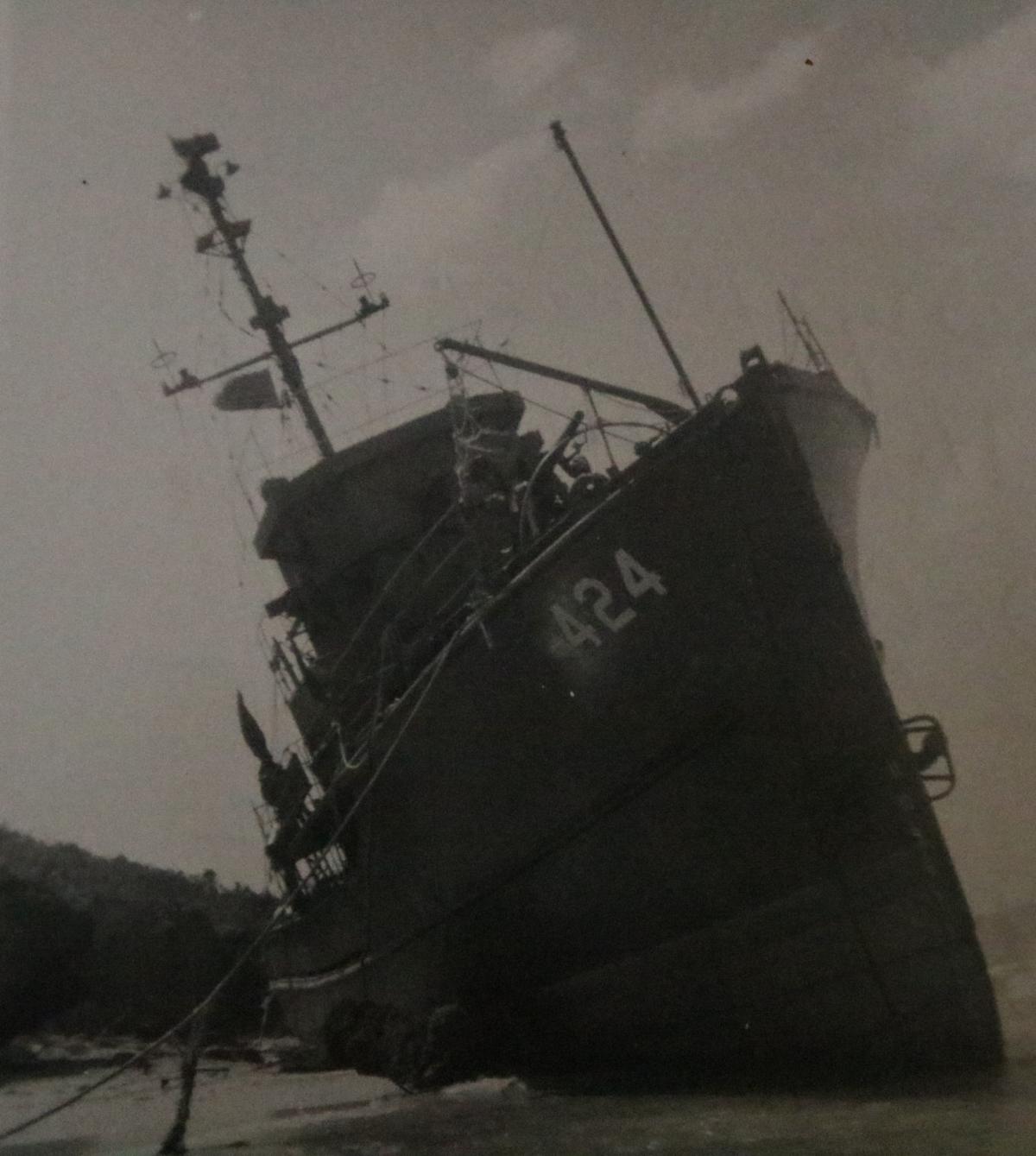 The YSM-424, a minesweeper, was washed onto a remote island near Okinawa during World War II. Robert Correy Sr., of Lewisburg, was aboard the ship during the typhoon that ultimately stranded the crew for about a week. 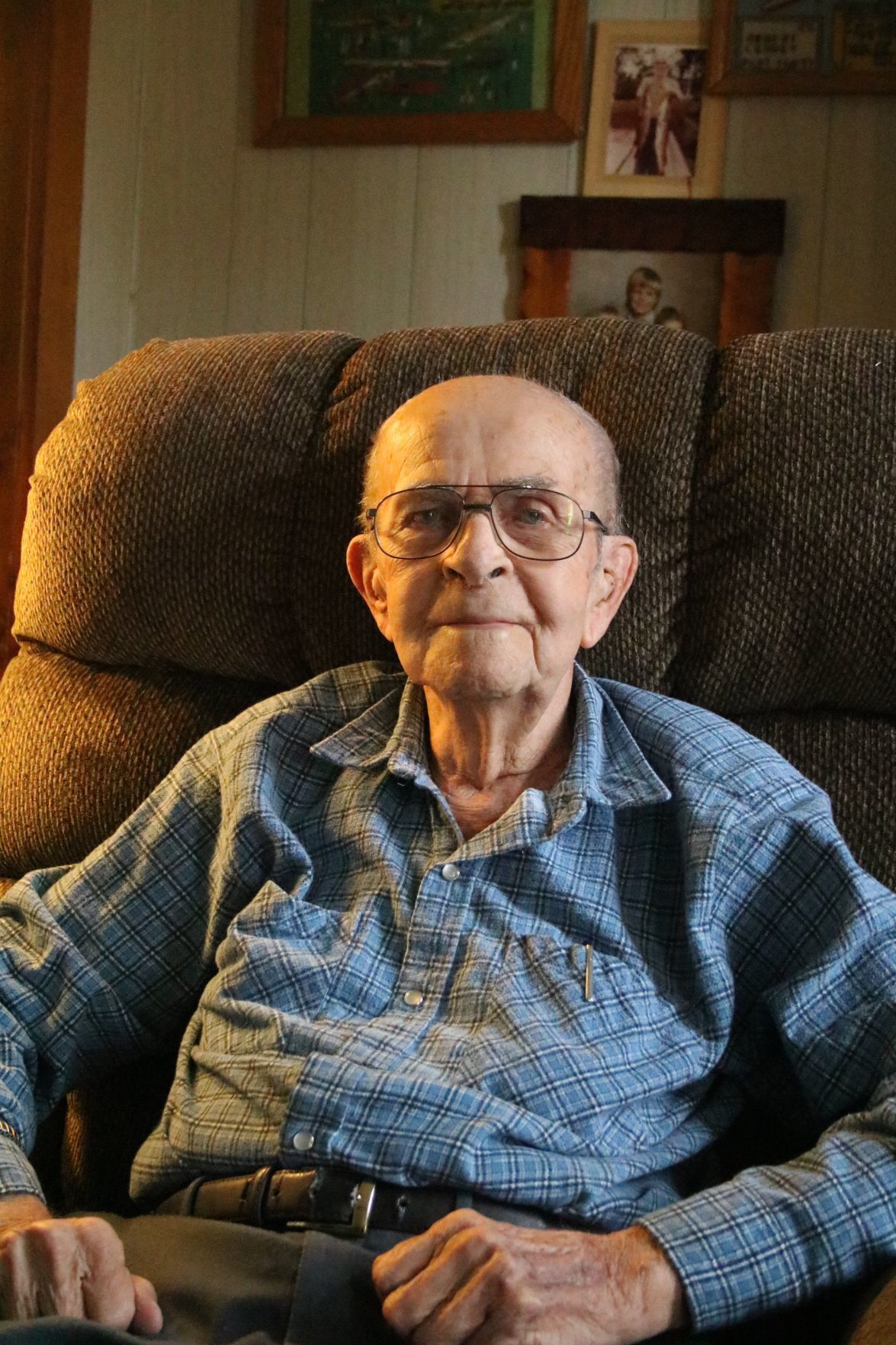 Robert Correy Sr. served aboard a minesweeper during World War II in the Pacific. At left, Correy today, at right, during his Navy days. 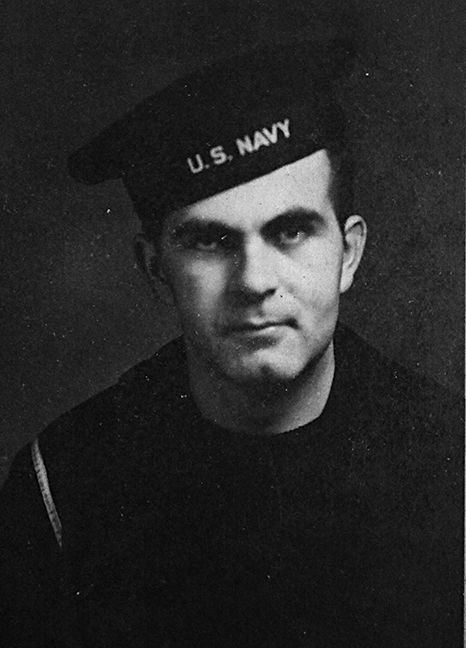 The YSM-424, a minesweeper, was washed onto a remote island near Okinawa during World War II. Robert Correy Sr., of Lewisburg, was aboard the ship during the typhoon that ultimately stranded the crew for about a week.

Robert Correy Sr. served aboard a minesweeper during World War II in the Pacific. At left, Correy today, at right, during his Navy days.

LEWISBURG — Navy sailors had plenty to worry about as World War II raged in 1945 in the Pacific. Japanese kamikazes, the Japanese Imperial Navy and machine gun placements entrenched in island fortifications threatened American ships as they hopped from island to island on their way to victory.

Mother Nature provided more than her fair share of anxious moments for sailors, soldiers and Marines in the Pacific as well, something Robert Correy Sr., of Lewisburg, remembered well.

“We were bobbing around like a cork,” said Correy, recalling Typhoon Louise.

It’s hard to imagine a Navy ship being tossed around the sea, helpless and unable to chart its course, but that’s exactly what happened to Navy veterans caught in the Pacific Ocean typhoons of World War II.

Robert Correy Sr., 99, of Lewisburg, lived through Typhoon Louise, which claimed the lives of 36 American sailors, left 47 missing and sank 12 ships in the area of Okinawa. The Oct. 9, 1945, storm roared for days, and produced waves as tall as a four-story building.

“We’d go sideways and plop down,” Correy remembered. “The waves were 35, 40-feet high. I thought the waves were going to tip us over.”

Correy was the radarman on the YMS-424, a wooden-hulled minesweeper that featured a crew of 20.

“I was on radar during the storm,” said Correy. “It picked up a small island off Okinawa. I told the captain, ‘We’re headed toward an island.’”

The captain ordered the men to abandon ship, and he and the officers did.

“The rest of us said we’d rather take a court martial than abandon ship,” Correy said, with a laugh.

Settling aboard the small, 136-foot-long sweeper, the sailors and the 424 washed ashore at the remote island.

“We were there a week,” said Correy. “We pulled what we could use from the ship. That first night the sand crabs were so bad we couldn’t sleep on the ground. We pulled hammocks and slept on the hammocks.”

A small troop ship rescued the stranded sailors and from there, the men were transported to Pearl Harbor, then home. En route, he and the other sailors learned the Japanese had surrendered. Needless to say, the news was welcomed.

“I knew we were going to get home soon,” said Correy.

The minesweeper Correy was on was invaluable to the war effort in the Pacific. Sailors aboard the vessels ventured into areas around the islands where troops were soon to arrive and swept the waters for enemy mines.

“Anyplace the Japanese could possibly land, we swept,” Correy said. “We did a lot of our activity at night.”

A Milton High School graduate, Class of 1938, Correy was drafted in 1943, after being passed over several times due to a heart murmur. He had landed a job in Baltimore, where he and his wife, Sarah, had moved, and where he was drafted once again.

“The doctor that checked me out, I asked him if he heard anything unusual,” Correy remembered. “He said, ‘Yes, I’ve heard it a hundred times. Off you go!’”

Basic training was completed at Great Lakes, Ill., then it was off to San Diego, Calif., for radar school. He also trained at Treasure Island, near San Francisco, and remembered his first time at the helm of a vessel.

“I went under the Golden Gate Bridge,” he said. “It’s something you don’t forget.”

“I guess they thought we were too small,” he said with a laugh.

Correy and wife Sara were married 69 years until her death Sept. 5, 2012. They have three children, Robert Jr., James and Bonnie.

Correy will celebrate his 100th birthday on June 23. He remains independent, and quite active.

He is a founding member of the Susquehanna Valley Modelers and still gets out to fly remote-control aircraft, something he’s enjoyed for decades.

He remembers when modelers had to craft their own planes. Now most come nearly ready to fly. His planes are larger, with wingspans that can exceed 10 feet.

Chris Brady is managing editor at The Standard-Journal and author of three Vietnam-era books, including “Remembering Firebase Ripcord” and “A War We Can’t Forget.” He can be reached at chris@standard-journal.com.