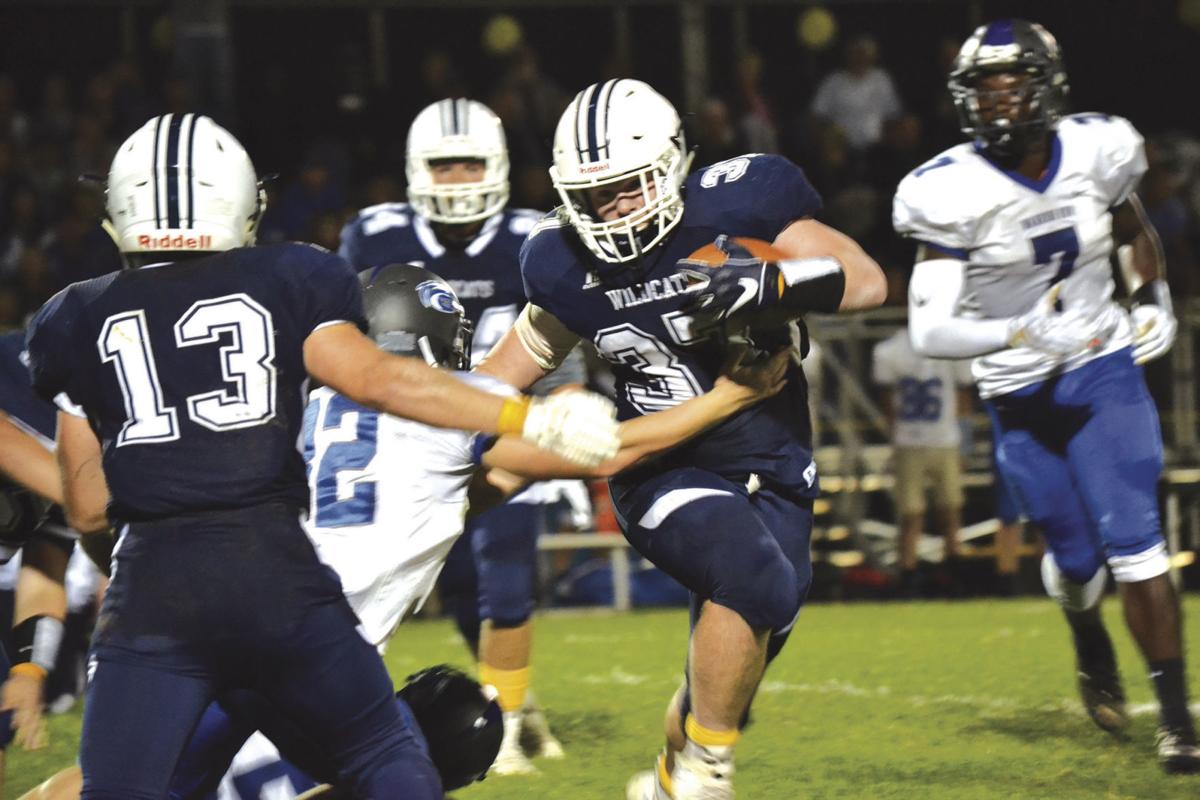 Mifflinburg running back Mason Breed breaks a tackle in the second half of the Wildcats’ 42-0 win over Warrior Run on Friday. 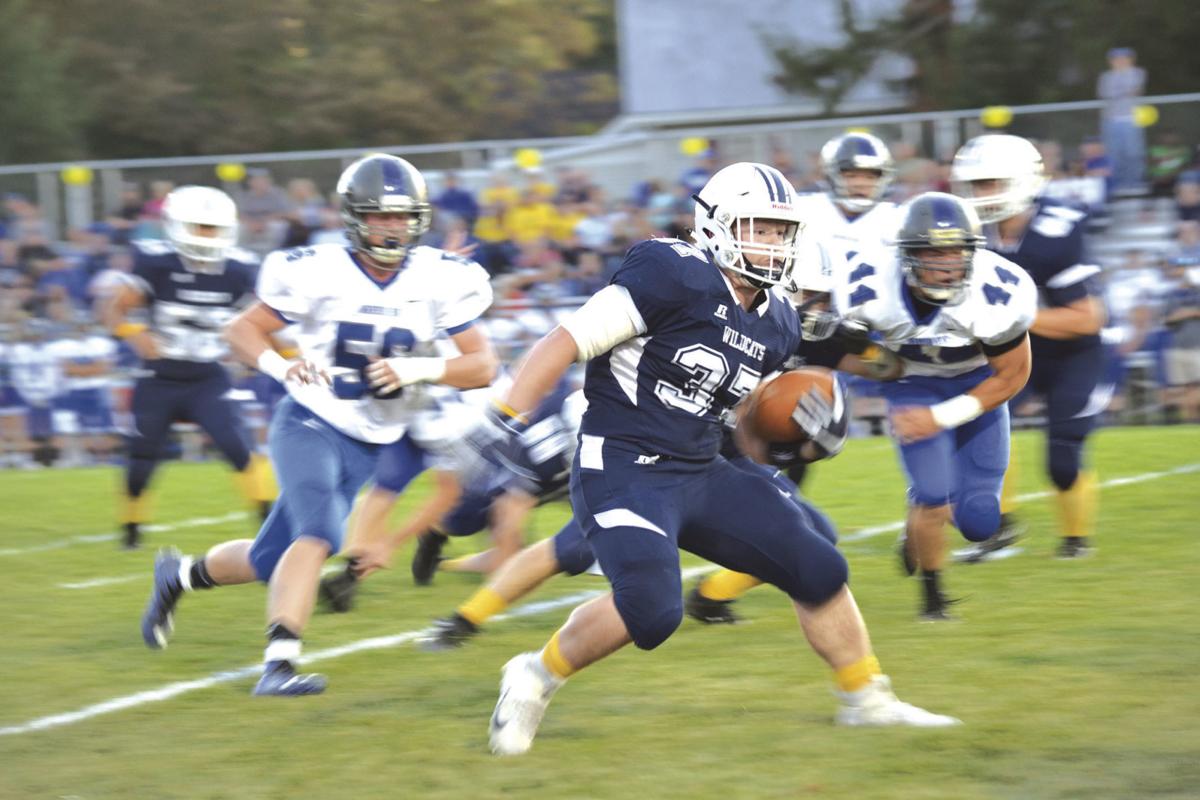 Mifflinburg running back Mason Breed looks for running room during the first half action against Warrior Run on Friday. Breed finished with three rushing touchdowns in the Wildcats’ 42-0 win. 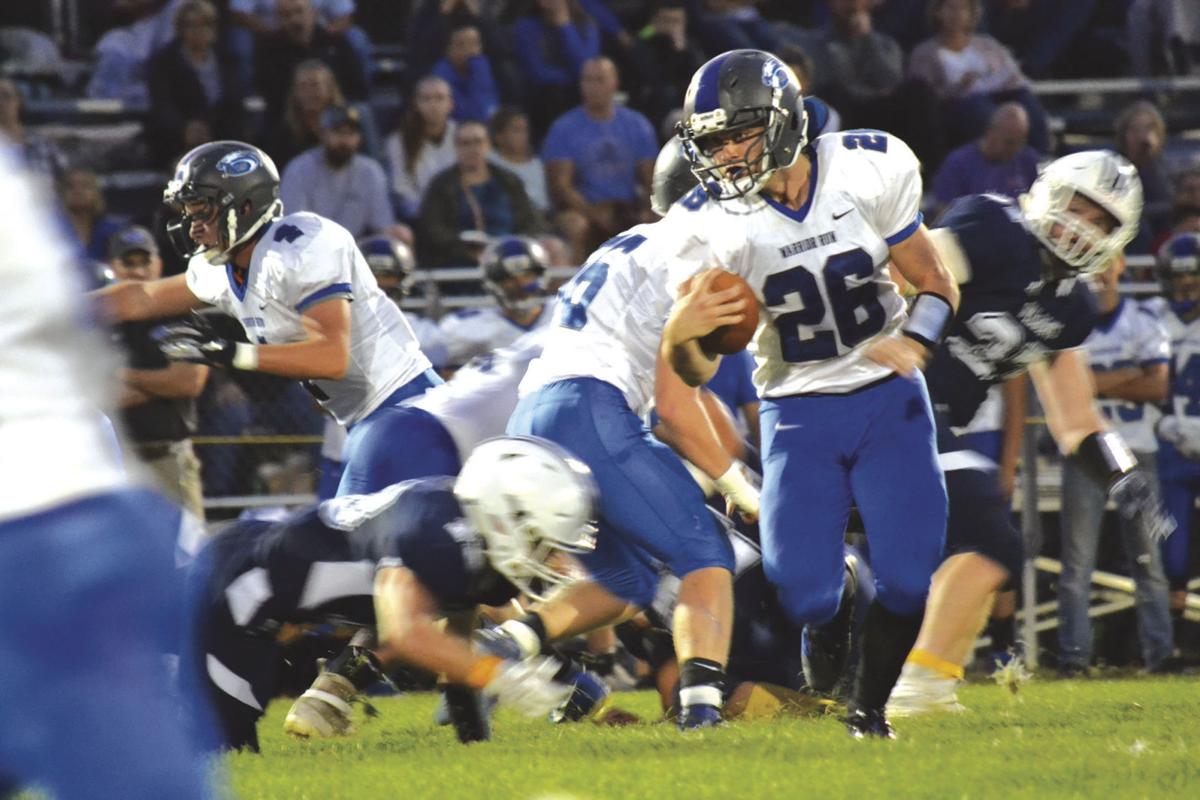 Warrior Run’s Hoyt Bower turns the corner and heads for open field in the second quarter against Mifflinburg. Bower led the Defenders with 85 yards on the ground.

Mifflinburg running back Mason Breed breaks a tackle in the second half of the Wildcats’ 42-0 win over Warrior Run on Friday.

Mifflinburg running back Mason Breed looks for running room during the first half action against Warrior Run on Friday. Breed finished with three rushing touchdowns in the Wildcats’ 42-0 win.

Warrior Run’s Hoyt Bower turns the corner and heads for open field in the second quarter against Mifflinburg. Bower led the Defenders with 85 yards on the ground.

MIFFLINBURG — Fans came out in droves to support Mifflinburg Area High School’s annual “Gold Out” night to support the fundraiser “Paws for Pediatrics”, and they also got to see one heck of a game by their Wildcats in the process.

After playing pretty one-dimensional the previous four weeks of the season, Mifflinburg still got its yards on the ground in Friday’s game versus Warrior Run, but the Wildcats also did some damage through the air as well.

The end result was almost 360 yards of total offense as Mifflinburg bounced back from its first loss of the season to take care of Warrior Run, 42-0, in a Heartland-II contest at Wildcats Stadium.

“After last week (a 35-19 loss to Danville), the game definitely showed where we were lacking and obviously weak at, and we needed to strengthen (those areas),” said Mifflinburg coach Jason Dressler. “That was the goal tonight — to prove that we have that capability of being two-dimensional and to just keep a balance (on offense), and I’m very proud of the guys’ execution tonight. They did a good job.”

Mifflinburg (4-1, 2-1 HAC-II) definitely showed no ill effects from last week’s loss when the Wildcats scored on their first four possessions of the game, and then some.

An eight-yard run right up the gut by Mason Breed resulted in Mifflinburg’s first touchdown just 2 minutes into the game.

On their next possession, the Wildcats got a one-yard touchdown run from Breed to increase their lead to 14-0 with 5:12 remaining in the first period.

And just to show that the team can do more than just pound the ball on the ground, Mifflinburg quarterback Gary DeGroat Jr. tossed a 25-yard touchdown pass to Rylee Stahl, who laid all out to make a diving grab in the endzone to build the Wildcats’ lead to 21-0 with 8:16 left in the second quarter.

“I give all credit to the offensive line and my running back (Breed). Last week we had a really tough time passing the ball, so we had a game plan to come into the game (and pass more), and my line did absolutely great,” said DeGroat Jr., who threw for 102 yards on 7-of-10 passing. “The past four games we just kept running it, running it and running it. People said I wouldn’t be able to throw the ball, but I showed (them) how it was today.”

Less than 4:30 later Breed added onto his night by rushing for a three-yard score to make the score 28-0.

And if that wasn’t bad enough for Warrior Run (2-3, 1-2), on the Defenders’ ensuing series Mifflinburg’s Andrew Diehl picked off a Remington Corderman pass intended for Ahmahd Keyes and returned it 55 yards for a pick-six and a 35-0 lead.

It was exactly the start Dressler needed from his team, especially coming off a tough loss.

“We had a great week of practice, and the players moved on (from the loss). I’m very proud of the boys to be able to move on after that and just focus on what we had to do this week, and they came out with a great game” said Mifflinburg’s coach, who was more than a little surprised by the final outcome.

“Warrior Run is a good ball team, and they play some really good competition and they played everybody very well,” said Dressler. “I wasn’t thinking (the game was going to be 42-0) to be honest, but the boys really stepped it up tonight.”

The finishing touches on Mifflinburg’s win came on Jacob Reitz’s seven-yard touchdown run with 6:20 left in the fourth quarter.

And not only did the Wildcats’ offense produce Friday night, so did their defense.

Mifflinburg picked off Corderman three times, with Diehl, Colin Miller and Carter Breed all getting interceptions. In addition, Mason Breed also recovered a fumble that helped the Wildcats bottle up Warrior Run’s offense.

“That was great to see. Getting those turnovers builds confidence,” said Dressler. “Last week we struggled some with our secondary getting picked on a little bit, and they had a chip on their shoulder this week. They wanted to prove some things, and coming away with those picks was huge.”

“I think Mifflinburg was more physical than we expected up front, and they took it to us,” said Warrior Run coach Chris Long, whose team hosts Hughesville in the next game. “We didn’t tackle well and Mifflinburg got up quick 14-0. And it was kind of like, anything we tried to do offensively — the turnovers hurt us big time.”

Mifflinburg will have a big test next week when the Wildcats play Mount Carmel at the Silver Bowl.

“Here we are halfway through the season already. Being 4-1 certainly builds a lot of confidence in their play, and working with teenagers you have to have confidence out on the field,” said Dressler. “As we approach the second half of the schedule, we just need to keep the discipline and focus that we had (Friday) and keep carrying it week-to-week and keep working to get better.”