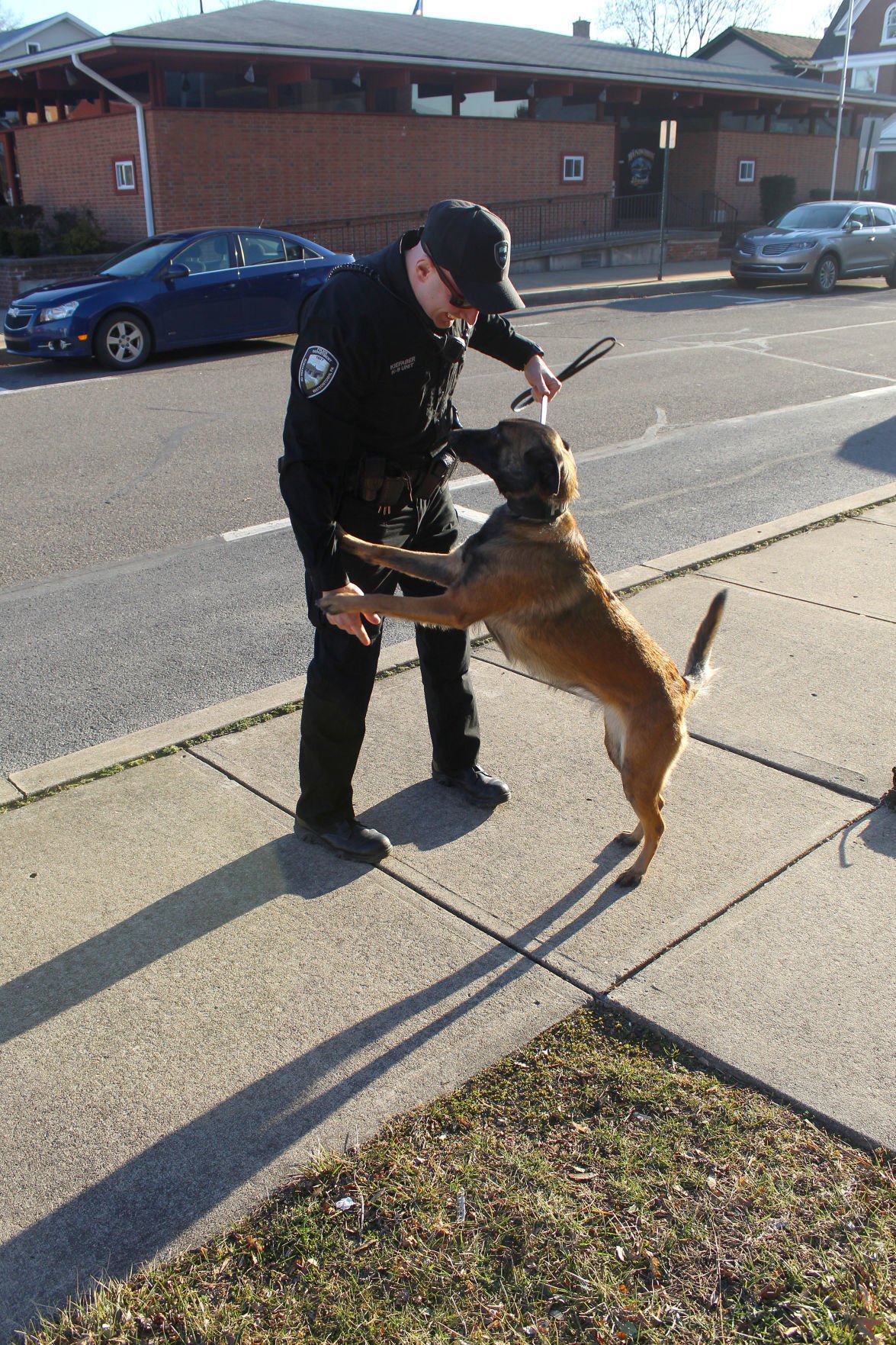 Officer Tim Kiefaber praised his police K-9 Mariska, who has been on the job with the Watsontown Police Department for one year. 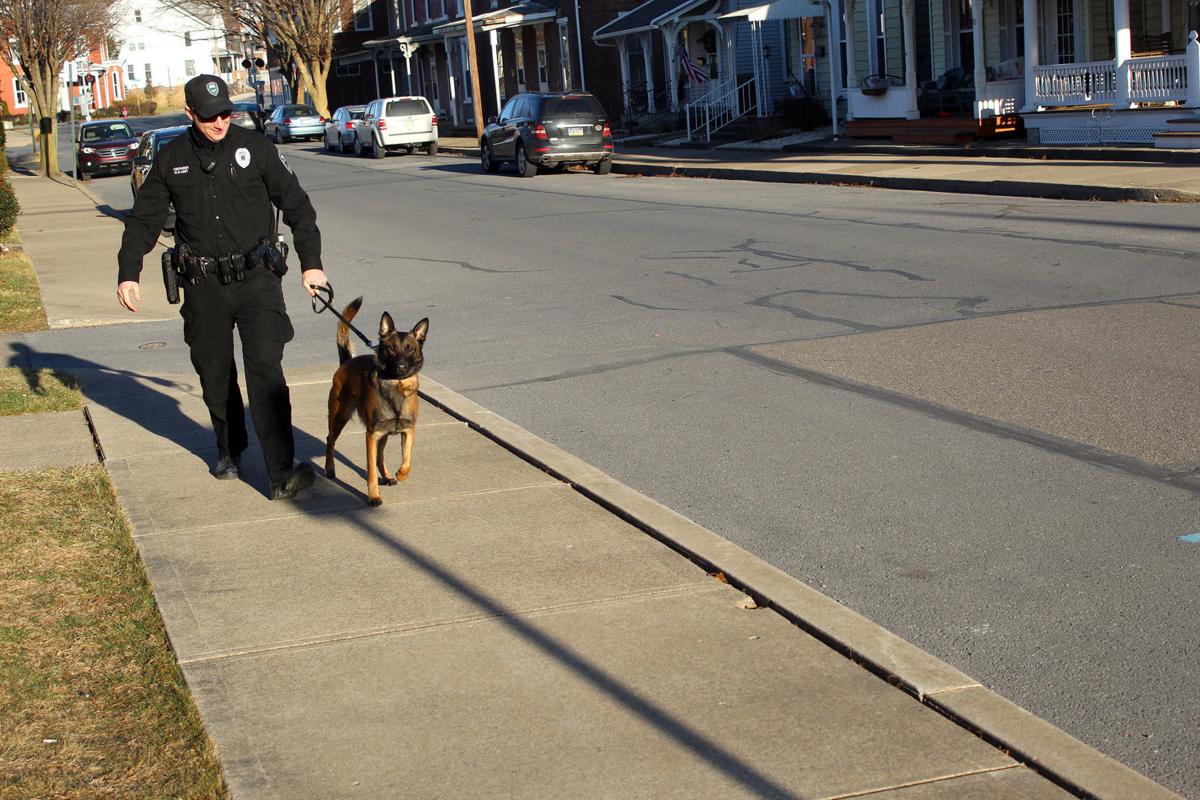 Watsontown Police Department Officer Tim Kiefaber walked down the street with Mariska, a drug-detection dog which has been on the job for one year.

Officer Tim Kiefaber praised his police K-9 Mariska, who has been on the job with the Watsontown Police Department for one year.

Watsontown Police Department Officer Tim Kiefaber walked down the street with Mariska, a drug-detection dog which has been on the job for one year.

WATSONTOWN — Mariska has been on the job with the Watsontown Police Department for one year and continues to receive robust support from the community.

A Belgian Malinois, Mariska was purchased from and trained through Shallow Creek Kennels in Sharpsville. Her handler, Officer Tim Kiefaber, went through one month of training with Mariska before she started her duties with the Watsontown Police Department.

Mariska is a non-aggressive drug-detection dog.

“I couldn’t be happier with the program,” Kiefaber said. “The level of support we have received from the public, elected officials, it’s been great.”

The police department will soon be releasing a list highlighting the number of drug seizures and arrests Mariska was involved with in 2019.

“We’ve had a lot of success on the street,” Kiefaber said.

He said educating the community about the dangers of drug use has also been a key component of Mariska’s work over the past year.

“That’s a big part of combating the drug use, education,” Kiefaber said.

As Kiefaber and Mariska are part of the Northumberland County Drug Task Force, they presented a program on the dangers of drug use in the Line Mountain School District.

Kiefaber has also spoken to a number of community organizations. Programs have also been presented to area Boy Scouts and pre-school students.

Mariska participated in sweeps of buildings to check for drugs in the Milton, Warrior Run, Shamokin, Mount Carmel, Montgomery and Midd-West school districts.

He said Montgomery was the only sweep where drugs were located. According to Kiefaber, some synthetic drugs were located in a vehicle in the parking lot after Mariska alerted to an odor of drugs coming from the car.

“We believe there was a residual (odor of) marijuana in the car,” he said, while explaining what drew Mariska to the vehicle.

“She can smell as little as 1 gram or its equivalent in residual odor,” Kiefaber added.

Given the Police K-9 Project’s close relationship with area school districts, the program is holding a contest for area students.

Between now and March 1, Northumberland County students in grades seven through 12 can submit the design for a logo for the K-9 program to the Watsontown Police Department.

“We will have a winner from each school district,” Kiefaber said. “They will receive a prize. There will be one grand prize winner.”

The grand prize winner will have their logo placed on T-shirts which will be sold as a fundraiser for the K-9 program. The logo will also be used on other material promoting the program.

Kiefaber said the logos should be submitted on 12-inch by 12-inch sheets of paper.

“We are really eager to see the work of the talented artists,” Kiefaber said.

The idea for the contest came about as a result of the department’s strong relationship with county schools, as well as the success of a 2019 T-shirt fundraiser.

“I looked at other (K-9) programs,” Kiefaber said. “A lot of them have their own logo.... We needed a new fundraiser for this year’s T-shirt and wanted to make it a contest.”

The Police K-9 Project is supported entirely through donations and fundraisers.

Over the past year, Kiefaber said the project has received approximately $100,000 in donations of cash and services.

“Building a program from scratch, you have nothing, no equipment,” Kiefaber said. “The big cost was the purchase of Mariska and the training.”

He said that cost around $10,000. To get the program started, Kiefaber said harnesses, collars and a vehicle heat alarm system all needed to be purchased.

A feature on Mariska which will appear a February edition of The Standard-Journal’s February Progress section. Tht article will highlight the numerous donations the K-9 project has received.

“Donations are always a key,” Kiefaber said. “We don’t have a program without the donations... I believe we have enough funding to get through the calendar year. We are relying on the generosity of the community.”

Tax-deductible donations to the Police K-9 Project can be sent to the Watsontown Police Department, 318 Main St., Watsontown PA 17777.