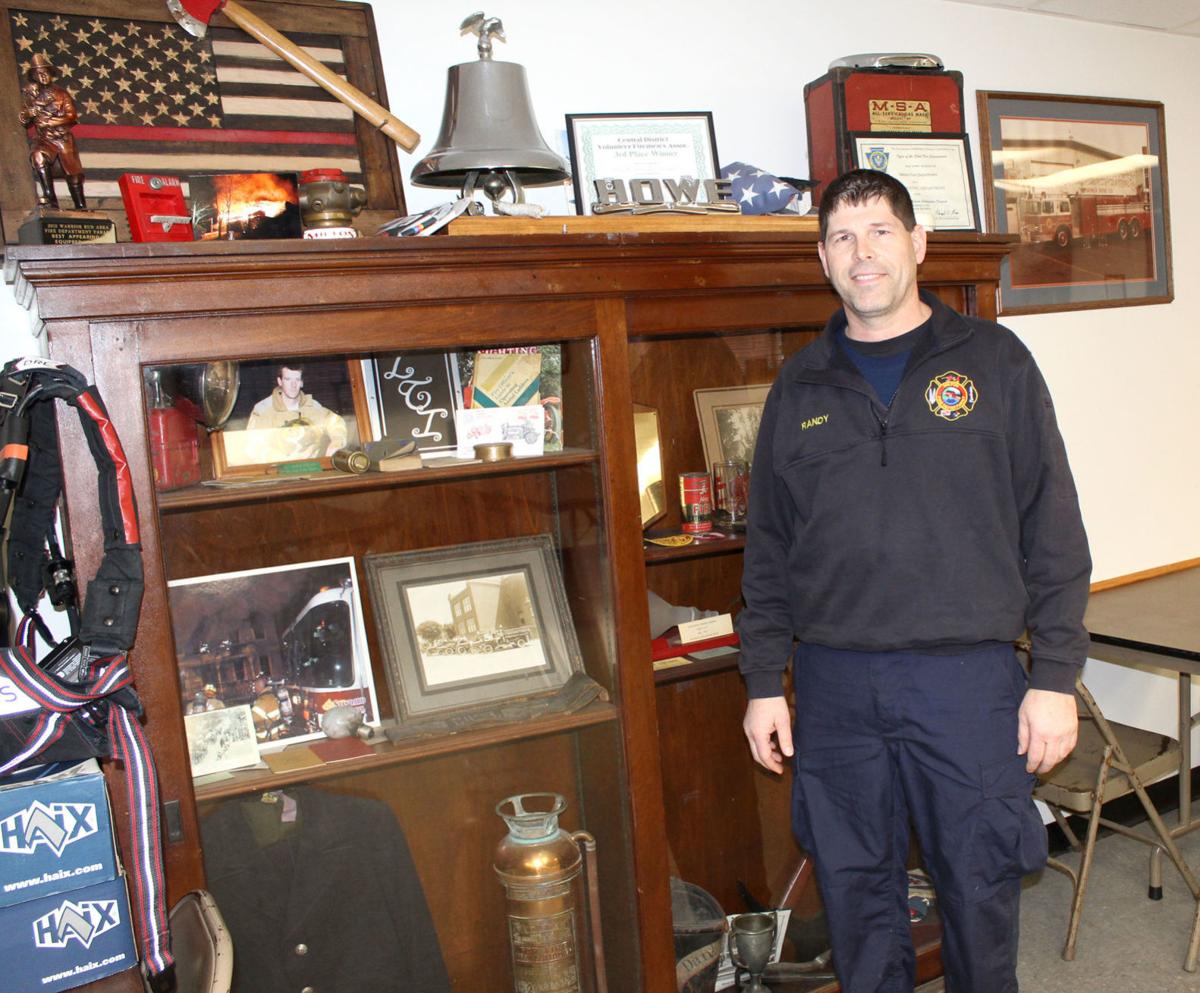 Randy Rugh was recently named the Milton Fire Department’s Firefighter of the Year. He joined the department when he turned 14. 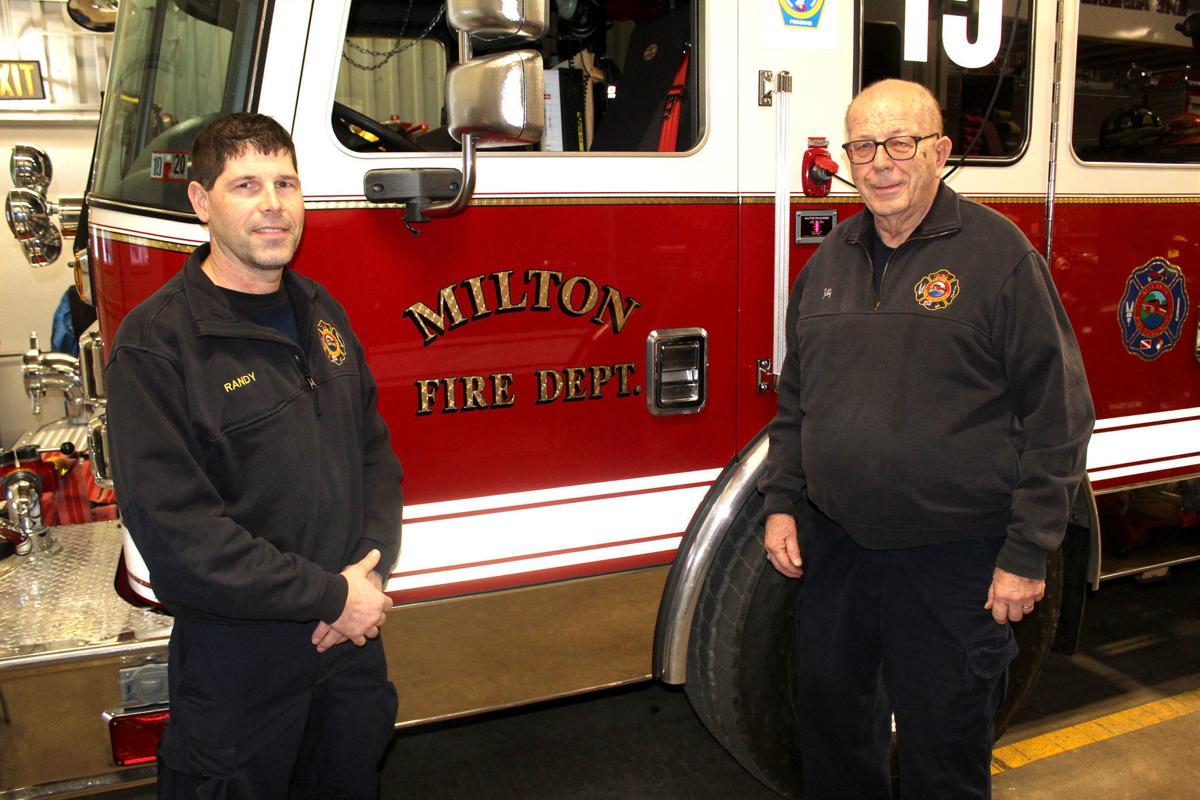 Randy Rugh was recently named the Milton Fire Department’s Firefighter of the Year. He joined the department when he turned 14.

MILTON — Randy Rugh has vivid memories from his childhood, and spending time with his brother Michael preparing what he described as “coin cards” to be delivered to homes across Milton.

The cards, Rugh explained, were used by the Fifth Ward Hose Company, a precursor to the Milton Fire Department. The cards were a fundraising tool, to be filled with coins by residents and returned to the department.

Today, Rugh is the Milton Fire Department’s vice president and as such heads up the annual fund drive. This year’s drive is in its final stages.

In addition to serving as the department’s vice president, Rugh is also a fire lieutenant who responds to about 25% of the calls for service which come in each year.

Volunteering with the department is part of Rugh’s lineage. His father Ray Rugh joined the Fifth Ward Hose Company in 1958.

Ray is still active with the Milton Fire Department, serving as the assistant secretary and treasurer. He is also the secretary of the fireman’s relief board.

“From as young as I can remember, I remember being around the fire house with my father and brother,” Randy said.

Randy was recently named the Milton Fire Department’s Firefighter of the Year. Ray and Michael both received the same honor years earlier.

Ray, his wife Pat, as well as sons Randy and Michael are all life members of the Milton Fire Department.

Michael is a retired Pennsylvania State Police fire marshal. He currently works as a full-time fire investigator and part-time firefighter in Carlisle.

When Ray became a fire chief in Milton, Randy and Michael were boys. If the two could beat their father to his car, they were allowed to ride along on fire calls when an emergency was dispatched.

“It was kind of a way of life,” Randy said. “It was service to the community and service to others.”

Randy joined the Fifth Ward Hose Company when he was 14.

A 1986 graduate of the Milton Area High School, Randy received a degree in mechanical engineering from Penn State University in 1990.

While he has not always lived in Milton, Randy has remained active in the fire service everywhere he’s lived.

While living in the Lock Haven area after graduating from Penn State, Randy volunteered with the Dunnstown Fire Company.

“I worked my way up to assistant fire chief,” Randy said.

He served with that department until moving back to Milton in 2001.

In 2009, Randy moved to the State College area. While there, he served with the Walker Township Fire Department.

He has lived in Milton since 2016 and has remained active with the fire department throughout the years. Randy said all three department’s he’s served with are similar in nature.

“It’s a bunch of guys in the community that want to help and have a passion for firefighting,” he said.

In addition to his volunteerism as a firefighter, Randy is also active in the fire service as part of his job. Working as a factory advisor at Merck in Danville, he is a member of the company’s fire brigade.

During his fire service in Milton, Randy has served on the former Milton Dive Team.

He joined the team in 1986 and volunteered with the effort until the team disbanded in the mid 1990s.

“My brother was in the Marine Crops in Hawaii,” Randy said. “We went to see him over Christmas. He took me scuba diving.”

Randy became hooked and soon thereafter signed on as a member of the Milton Dive Team.

In addition to volunteering as a member of the Milton Fire Department with his father and brother, and on the dive team, Randy holds numerous memories of his fire service.

He is quick to point to a fire which destroyed Vogel’s Cleaners in 2010, and one which ripped through Bethany United Methodist Church in November, as emergency calls which will always remain fresh in his memory.

“I remember the tremendous effort we were all making to try to get it stopped,” he said, while reflecting on the Vogel’s fire. “Everybody has the same focus. They want to do a good job.”

Ray said it can be a bit nerve wracking serving with his sons on a fire call.

“Sometimes, you get a little concerned about where they are and what they’re doing,” he said. “You always want everyone to come home. That’s the whole thing, that everyone comes home.”

Randy said responding to emergencies is just part of the service volunteers give to the Milton Fire Department.

“The big thing is the fundraising,” he said. “Between fundraising and training, that’s the majority of your time.”

Fundraising is a critical component of the department.

He said the department must pay the utility bills to operate its two buildings, as well as maintain its vehicles and equipment.

Randy added that any amount someone can donate to the Milton Fire Department is appreciated. Sometimes, he said the department receives $5 checks from families he knows can’t afford to give even that amount.

“It really means a lot to know that was a sacrifice for them,” he said.

In addition to their fire service, members of the Rugh family have also been involved with Boy Scouts over the years. Randy is an Eagle Scout and has served as an assistant Scout master.

Randy said he was proud to be named Firefighter of the Year.

He and other members of the department are also honored to be able to serve the community.

“There’s a small number of people making a huge sacrifice with their families to serve,” Randy said. “We are not asking for anything in return… We are happy to go out (on emergency calls). It’s not an inconvenience.”