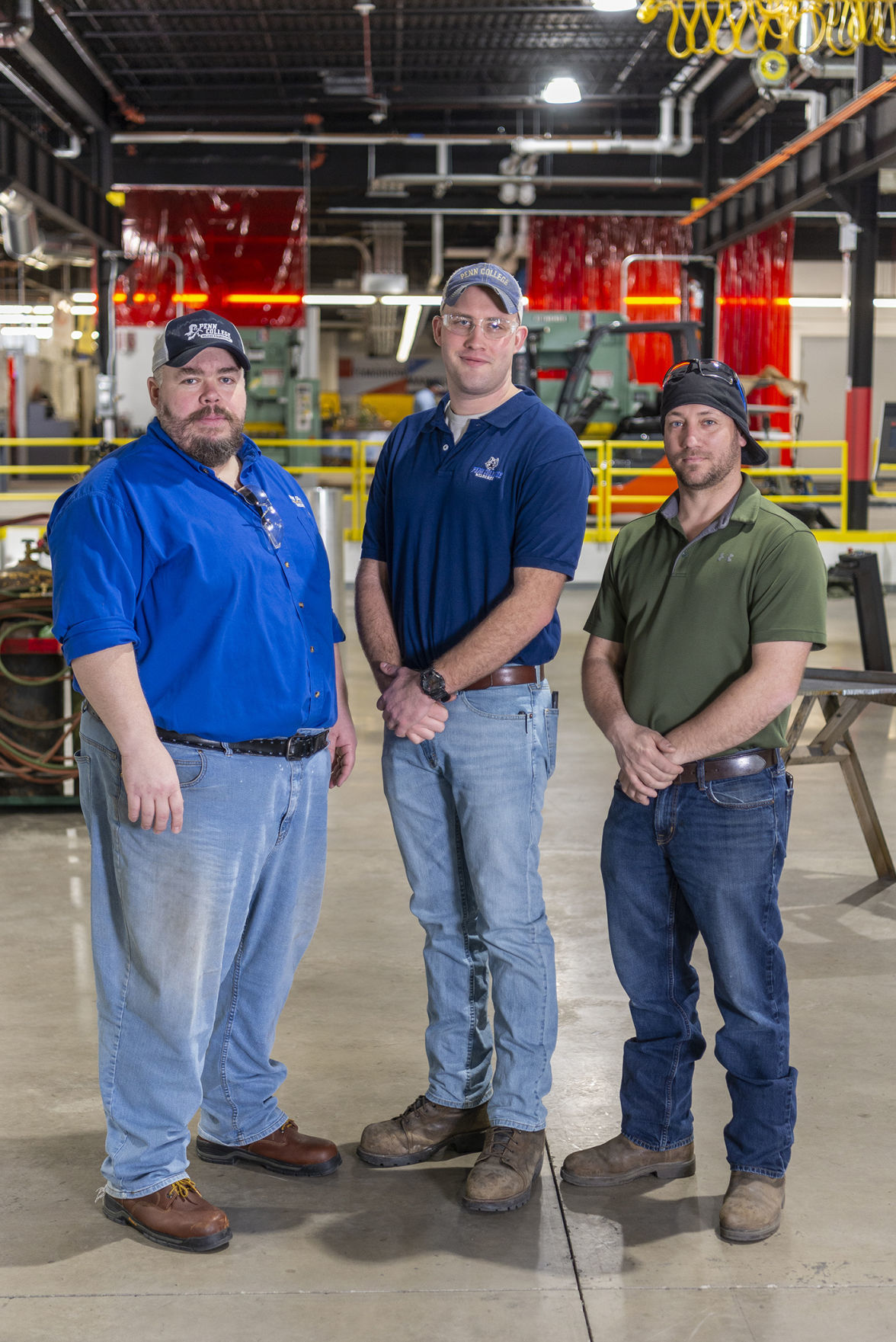 The lead Penn College welding faculty for the project are, from left, Jacob B. Holland, Cody W. Wolfe and James N. Colton. 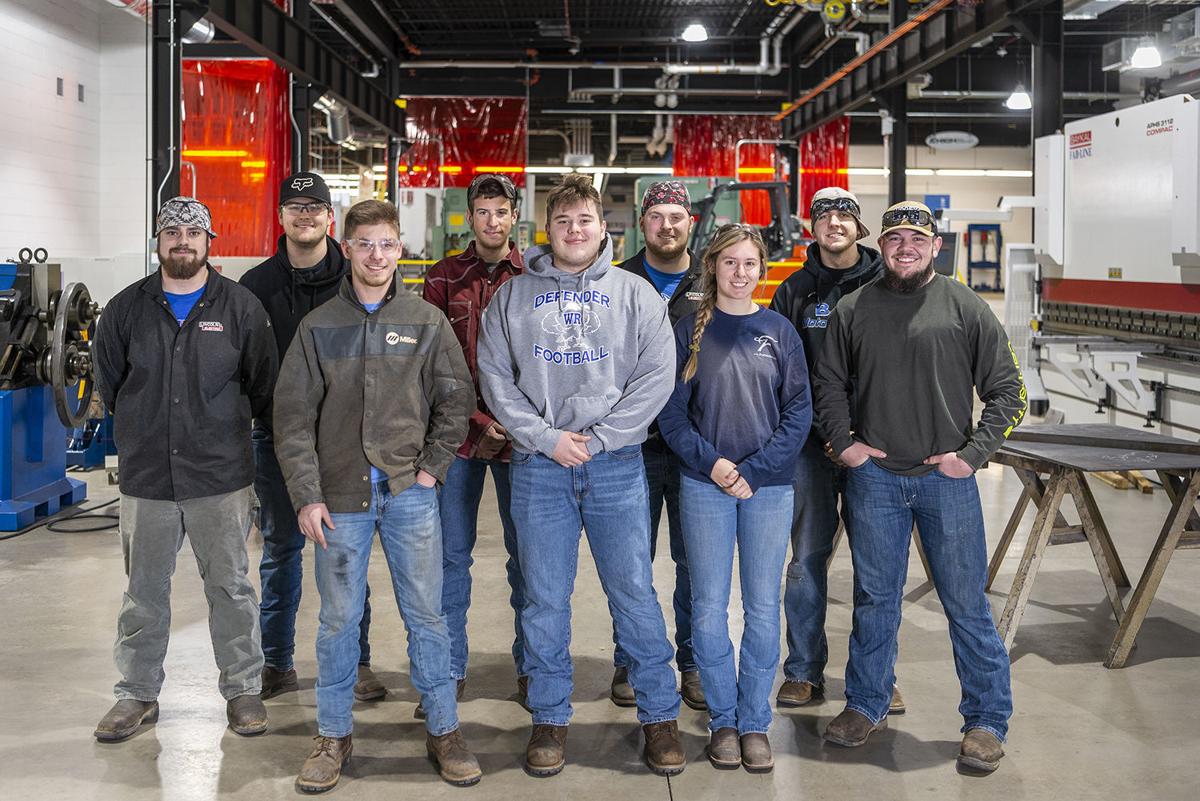 The lead Penn College welding faculty for the project are, from left, Jacob B. Holland, Cody W. Wolfe and James N. Colton.

WILLIAMSPORT — A massive structure meant to encourage the “ecological awakening of humanity” can trace its foundation across the Atlantic Ocean to the welding expertise and facilities offered at Pennsylvania College of Technology.

Nine instructors and 15 students spent 10 weeks fabricating the structural framework for the Living Chapel, unveiled this week at the Botanical Garden of Rome during Global Catholic Climate Movement activities. Its formal unveiling via streaming video is scheduled for June 5, U.N. World Environment Day.

When social distancing rules permit, the open-air sanctuary — made of aluminum and recyclable and repurposed materials — will be placed at the Vatican before being moved to its permanent home in Assisi, Italy, the birthplace of St. Francis, the patron saint of ecology, whose small church provided the footprint for the Living Chapel.

“I don’t think it’s sunk in yet, what it’s going to mean to everybody,” said James N. Colton II, assistant professor of welding, who led the Penn College fabrication team. “It’s definitely a big deal.”

The unique project connects Penn College to myriad forces: an Australian-Canadian music composer, a Toronto-based architect, faculty and students from the Department of Architecture within the Stuckeman School at Penn State, Vatican and U.N. officials, Italian landscape architects and botanists, as well as other individuals and entities.

“It was amazing that we got our hands on it,” said Nolan Durecki, a welding and fabrication engineering technology major from South Lyon, Michigan, one of the Penn College students who assisted. “It was cool working hand-in-hand with the instructors. They become like another welder that you are working with.”

The Penn College crew worked 3,500-plus hours and used nearly 5,000 feet of aluminum — about 16 football fields in length — to build the four walls for the chapel, designed to integrate nature, art, music and architecture. Two sections separate to create a space in the shape of a cross. The other walls connect to form a geometric symphony of angles. The structure measures approximately 45 feet long by 30 feet wide, with heights ranging between 10 and 15 feet.

“When you enter into the space, you’re enveloped by this holistic experience that is intended to be this instance of serene harmony between humanity and nature,” said Julian Revie, creative director of the Living Chapel and associate director of music at the Center for Music and Liturgy of Saint Thomas More Chapel at Yale University.

The U.N. 2030 sustainable development agenda and Pope Francis’ 2015 encyclical “Laudato Si,” the papal letter that calls safeguarding the planet an “urgent priority,” inspired Revie to brainstorm with the Vatican ecology division to develop a portable “artistic installation for ecological impact.”

Those discussions led to the concept for the Living Chapel, a physical structure combining music with architecture influenced by Porziuncola, the chapel in Assisi that St. Francis rebuilt in the early 13th century.

“Music is ephemeral. I think the real power of this project happens in the confluence of the musical element and the physical reality, so people can come into the Living Chapel and have a holistic, all-encompassing experience,” said Revie, who has composed music for two papal masses.

Three of the sections are covered with a mix of 3,000 evergreen leaves and flowers inserted into recycled fleece fabric stapled to a PVC board that is bolted to the aluminum walls. Most of the metal is exposed as a visual element for the fourth wall. It features discarded, small steel pans serving as “drums,” stamped steel automotive scrap repurposed into decorative metal screens, and suspended cross cutouts — made of metal waste — that chime when moved by the wind.

A solar-powered irrigation system nurtures the vibrant plants — perennials grown north of Venice — and helps “play” the vertically stacked steel pan drums located throughout the walls. Circulating water causes mallets to strike the drums, creating a natural melody. More than 2.6 tons of water are housed in the walls’ bases.

“The initial PDF that we saw didn’t show the complexity of the project,” Colton said with a smile. “We were definitely a little bit more overwhelmed once we got into it.”

“It’s just amazing to be like, ‘I have a couple welds on that,’” said Sara D. Stafford, a welding and fabrication engineering student from West Chester. “Penn College creating a huge structure and piece of art for Italy. Who would have thought?”

The answer is Penn State.

Gillean Denny, an independent architectural designer in Toronto, partnered with Revie, a graduate school friend from the University of Cambridge, to design the Living Chapel. A 2007 Penn State alumna, Denny boasts a strong background in sustainable design, urban agriculture and theater production.

The project’s complexity prompted Denny to seek assistance from one of her Penn State mentors, James Kalsbeek, associate professor of architecture. In late summer, he hand-picked a small team, comprising mostly graduate students and research assistants, to provide invaluable design support with the intent of fabricating and building the chapel at University Park.

Once Kalsbeek realized Penn State didn’t possess the resources to construct such a large structure, he contacted Penn College, which enjoys a long history with the Penn State architecture program. Each year, Stuckeman School students — including Denny in 2002 — receive hands-on building experience by visiting the college’s masonry lab to cut stone and lay brick.

Kalsbeek’s request in September to extend the relationship to the welding and metal fabrication department was well-timed. Penn College recently opened its expanded 55,000-square-foot welding lab, believed to be the nation’s largest. The facility provided ample space and fabrication equipment, such as electric cold saws, portable band saws, grinders and MIG welding units.

It was also home to the most crucial components for success: the expertise and will of welding faculty and students. They embraced what Kalsbeek called a “mammoth, gargantuan task,” despite a looming deadline.

“The faculty saw this as a huge opportunity for students and the institution,” explained Bradley M. Webb, dean of industrial, computing and engineering technologies. “It would help students with their practical skills, and given the significance of the project, carry the Penn College name for generations. They would not let this fail.”

“It was great to see our teachers so involved and so committed to something, because their dedication made me more dedicated to the project,” Stafford said. “They did an amazing job, and it was flattering and humbling to say that I worked with them on that.”

The work began in earnest in November after the welding faculty recommended switching the building material from steel to aluminum to cut the weight in half and eliminate the time-consuming powder-coating process. The walls had to be completed by late January before transported to Penn State and shipped, by boat, to Italy.

“It could not happen without them (the Penn College team),” Denny said. “Not only were they instrumental in actually fabricating it, but they helped us work through the design of it, to make changes, to make it easier and better to build, and stronger,” Denny said. “They were incredibly creative.”

“It was definitely challenging because the structure was still evolving as we were fabricating it, so we would get the plans for Wall A, and while we were working on that wall, Gillean would finalize the plans for what Wall B would look like, and so on,” Colton said.

Based on Denny’s drawings, Jacob B. Holland, instructor of welding, led the effort to calculate the various lengths and angles of aluminum tubing required for each section and spent countless hours making the cuts. Colton; Cody W. Wolfe, instructor of welding; and a slew of other faculty and students applied nearly 5,000 1-inch welds to erect the structure.

“All of us had to go back and rethink about fabrication and how we fabricate things, especially in aluminum, because aluminum will move and distort,” Colton said.

The learning extended to students, who assisted with the required cutting, welding and grinding.

“I hadn’t done a whole lot of MIG welding on aluminum, so it was good hands-on learning,” Durecki said. “I like to learn by getting thrown on something and trying to figure out the best way to do it.”

“It gave me a better perception of what I want to do with my future,” Stafford said. “I definitely enjoyed the group work rather than working alone on something. Before, I liked doing things by myself. Now, I know for the future that I want to work with a group.”

Finals and winter break eliminated student availability for some weeks, which put the deadline pressure solely on the faculty. Ten- to 12-hour shifts — including the days before and after Christmas — became the norm.

“They literally were working miracles on that campus through Christmas break and into the new year,” Denny said. “But no way, no how, did the chapel get built without them. Period. They were amazing.”

“Toward the end, we were wondering if we would make it on time,” Colton admitted. “We were still welding on pieces as they were loading the truck. There was a lot of stress released when it was gone.”

That truck delivered the walls to the Laundry Building at Penn State, where Kalsbeek’s team had spent months assisting Denny with various design aspects, focusing on the chime wall, the drums’ music function and the irrigation system. They combed through 1,500 pounds of scrap donated by two automotive metal stamping plants to devise “framed” screen patterns to be fastened on the chime wall and inserted some of the 15-inch steel pan drums in the wall before all the sections were shipped in early February.

The Penn State students were scheduled to assemble the Living Chapel in Rome during Spring Break and assist in its move to the Vatican in May. The COVID-19 pandemic scrapped those plans. A Rome-based architectural firm, Sequas, stepped in for the students with Denny coaching them through the details of the assembly via email and Skype from Canada.

For the foreseeable future, the Living Chapel — surrounded by recycled oil barrels containing 2,500 saplings of 46 tree species from Central and Southern Europe — will remain at the Botanical Garden of Rome, waiting for its eventual move to the Vatican and finally Assisi. It will be placed permanently near the grounds of the Basilica of Saint Mary of the Angels, a UNESCO World Heritage Site and home to St. Francis’ chapel.

“A lot of us looked at it as a project that we wanted to do for the school and for the program. It was something neat to be a part of,” Colton said. “I don’t think it’ll really sink in until we see it up close and go, ‘Hey, we helped build that.’”