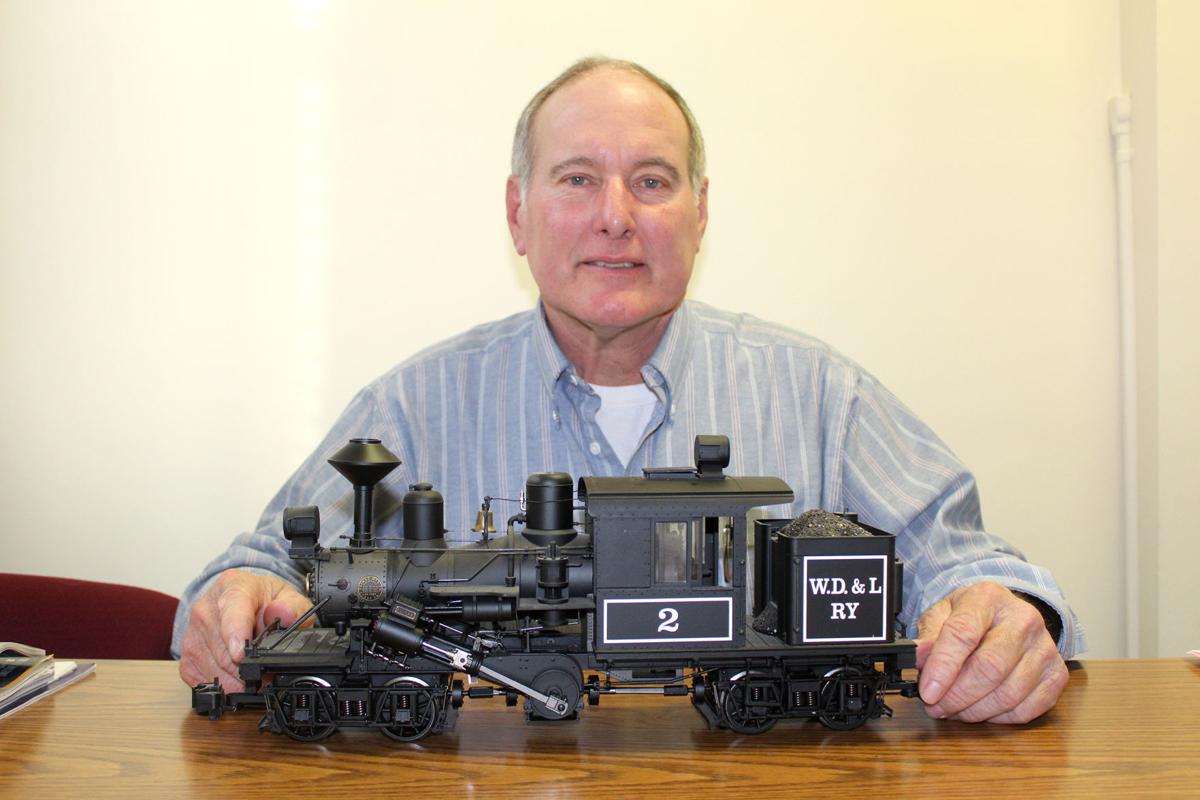 Tim Bittner, with a G-scale replica of an engine which would have operated along the White Deer and Loganton Railway more than 100 years ago. 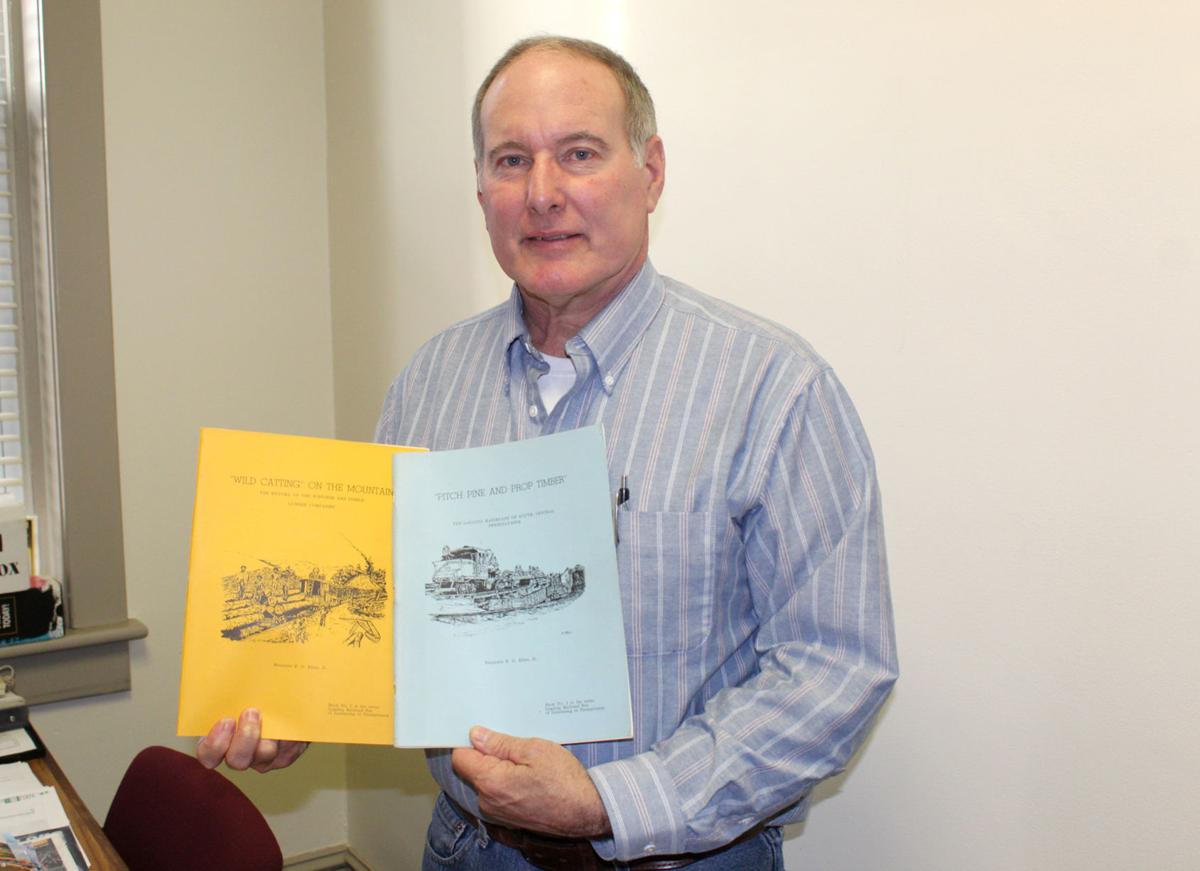 Tim Bittner will draw on two books by Benjamin Kline Jr. as he presents ‘How the Narrow Gauge Railroads Transformed Life in the White Deer Valley in the Early 20th Century.’

Tim Bittner, with a G-scale replica of an engine which would have operated along the White Deer and Loganton Railway more than 100 years ago.

Tim Bittner will draw on two books by Benjamin Kline Jr. as he presents ‘How the Narrow Gauge Railroads Transformed Life in the White Deer Valley in the Early 20th Century.’

MILTON — While he acknowledges that many railroading enthusiasts became interested in that unique part of history as young children, Tim Bittner’s passion was sparked as a teenager.

“My interest in the local narrow gauge (railroad) started in high school,” said Bittner, who is now the Milton Historical Society’s president.

“I would do trips along the White Deer Pike,” he said, while discussing his teenager years. “On the right, you will see the abandoned railroad bed of the White Deer Valley Railroad.”

His curiosity about the stone bed started to grow.

He will explore those questions, and others, as the historical society’s 2020 lecture series kicks off at 2 p.m. Sunday, Jan. 26, in the Milton Area High School library. Bittner will present “How the Narrow Gauge Railroads Transformed Life in the White Deer Valley in the Early 20th Century.”

A 1974 graduate of the Milton Area High School, Bittner started researching local narrow-gauge railroads when he purchased two books, “Wild Cutting on the Mountain” and “Pitch, Pine and Pop Timber.” Both were written by Benjamin Kline Jr., of Lancaster County, with assistance from Thomas Taber III, of Muncy.

“A lot of the answers (about the railroad) are found in those two books,” Bittner said.

In the early 1980s, he personally met with Kline, who is now deceased, in order to learn more of the history. He later met with Taber to further his knowledge.

“My hat goes off to Taber and Kline,” Bittner said. “They did the foundational work, the research, with the individuals who knew the railroad while they were still living.

“If it wasn’t for these two… individuals, the local history would’ve been lost.”

At the same time he purchased the two books, Bittner also received a map of the White Deer region, which was put together by William Whitmer in 1904.

“Prior to the 1904 legal settlement, both narrow gauge railroads crossed each other at a diamond, a railroad term for a 90-degree intersection of two separate tracks,” Bittner explained. “This occurred in only one other location in Pennsylvania.”

In 1906, he said a new narrow-gauge railroad was chartered to extend an additional eight miles, to Loganton.

“The White Deer and Loganton Valley Railway provided both freight and passenger service to residents of Sugar Valley, with connections with the Reading Railroad at White Deer,” Bittner said.

In addition to connecting residents of Loganton with the station, Bittner said individuals also traveled the passenger line for recreational purposes.

“They provided transportation to take people there for their church picnic, ox roasts,” Bittner said. “The picnic pavilion was a main attraction.”

A trip by rail between White Deer and Loganton took 2 hours, 40 minutes to complete, according to Bittner.

By 1916, he said the automobile was gaining in popularity and the timbering industry was going under.

“On May 31, 1916, the last passenger train left Loganton,” Bittner said, adding that the railroad’s timbering business line also stopped running at around the same time.

Bittner will expand on the history of the local narrow-gauge railroad during his lecture. He hopes to keep that piece of history alive by sharing the knowledge he’s acquired about the railroad.

The presentation will include photos of railroading images Bittner acquired from Kline and Taber. He will also have a model railroading engine — just like one which would would’ve traveled along the White Deer and Loganton Railway — on display.

“This is scaled to size, in a G-scale,” Bittner said, of the model. “It’s one of your larger models.”

The Feb. 16 lecture will feature Jill Lawrence, an actress and first-person interpreter from Newark, Del.

Lawrence will portray Betsy Ross, discussing the controversy over her role in the making of the U.S. flag.

Scott Bomboy, editor of the National Constitution Center in Philadelphia, will be the featured speaker during the March 15 program.

Bomboy will present “The Fight to Save Pennsylvania’s Covered Bridges.” He will discuss efforts to preserve bridges and explain why 200 of the bridges remain intact.