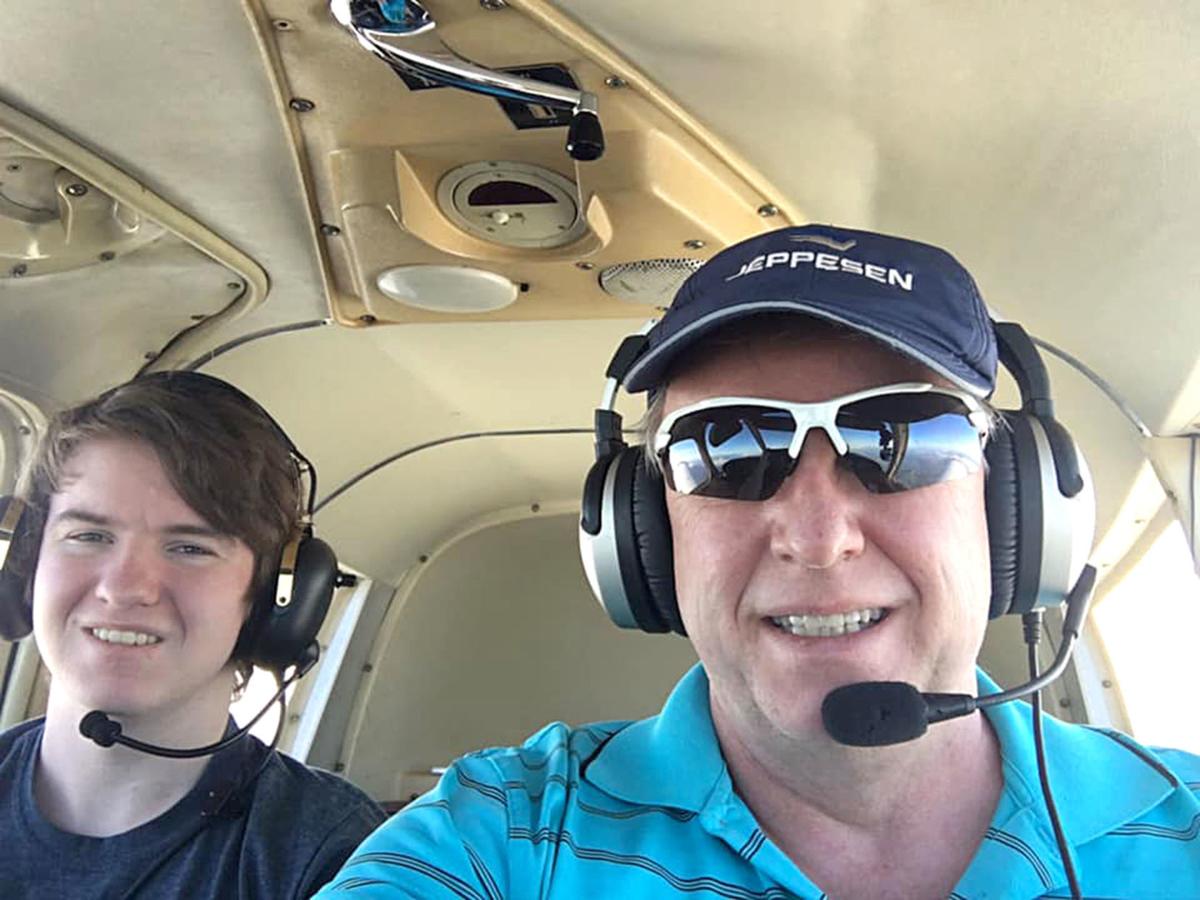 Dr. Carl Jenkins was at the controls as he and his son Keegan Jenkins, a member of the Warrior Run High School Class of 2020, flew an airborne salute to this year’s graduates. 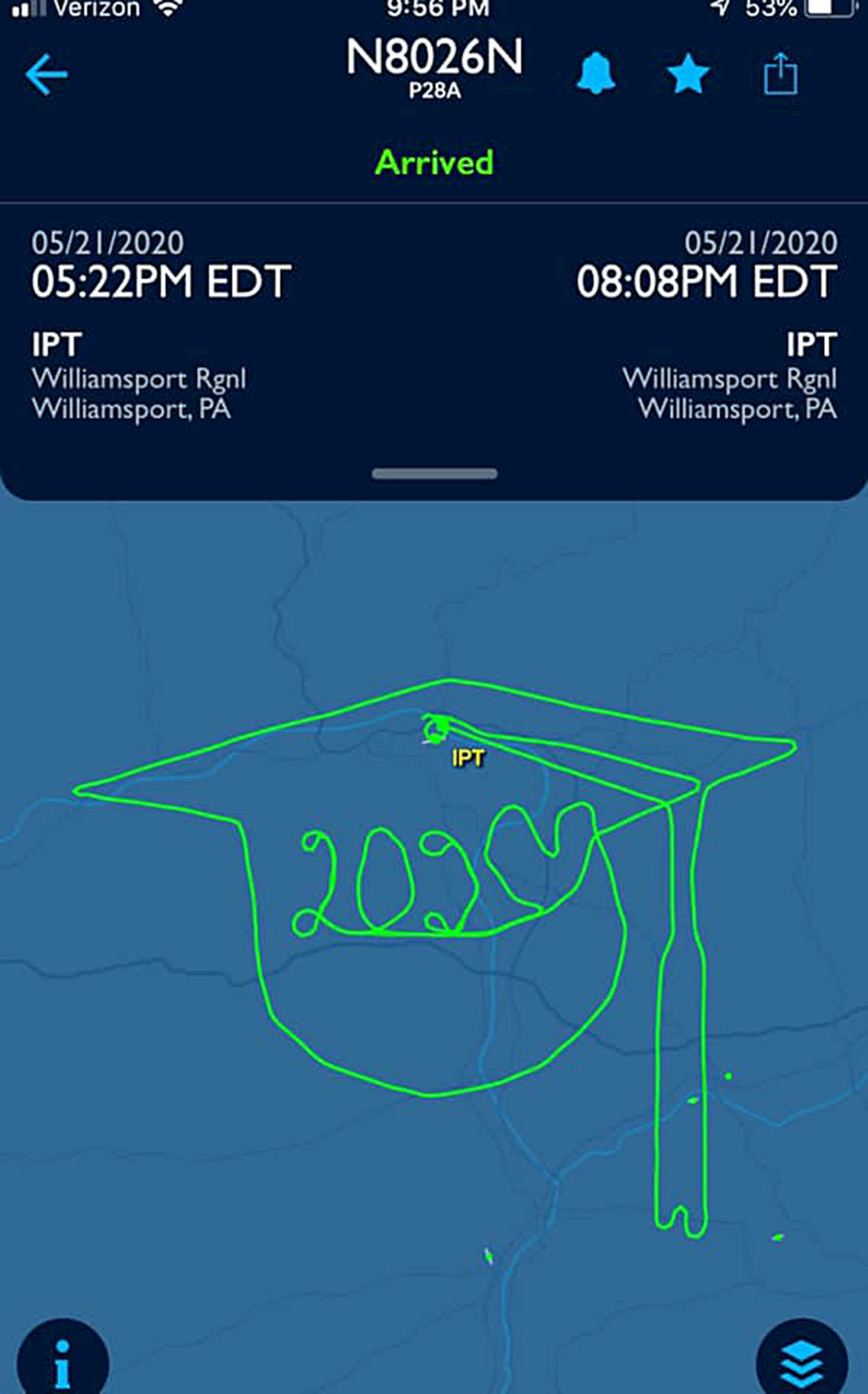 This image shows the flight pattern flown by Dr. Carl Jenkins, as a tribute to members of the Class of 2020. The point of the heart appears directly over the Warrior Run High School on the map.

Dr. Carl Jenkins was at the controls as he and his son Keegan Jenkins, a member of the Warrior Run High School Class of 2020, flew an airborne salute to this year’s graduates.

This image shows the flight pattern flown by Dr. Carl Jenkins, as a tribute to members of the Class of 2020. The point of the heart appears directly over the Warrior Run High School on the map.

WATSONTOWN — If you looked to the skies on May 21, you may have noticed a small airplane gliding high above the Central Susquehanna Valley. What you may not have realized was the meaning behind the plane’s flight pattern.

A pilot for the past 12 years, Dr. Carl Jenkins took to the skies in a special flight designed to pay tribute to the Class of 2020.

Jenkins, who has a dental practice in Watsontown, was joined on the flight in his 1969 Piper Cherokee by his son Keegan Jenkins, a member of the Warrior Run High School Class of 2020.

Carl has logged around 1,000 flight hours over the last 12 years. His plane, which he said is well maintained, is based at the Williamsport Regional Airport.

“It had its engine rebuilt” Carl said, of the plane. “That’s the basic thing about airplanes, they hold up over the years.”

He noted that airplanes are required to be equipped with a specialized device which tracks their locations at all times.

With the device on his plane, Carl is able to use the website flightaware.com to record and draw the track of his airplane’s location when it is in the air.

He said pilots soon realized the technology affords them the opportunity to fly in manners in which the recorded track of the plane can appear as a written message.

“I thought about doing this for a long time,” Carl explained. “I never found the right thing to (write).”

Inspired by multiple acts of kindness others have shown toward the Class of 2020 in the midst of the coronavirus pandemic, Carl decided to fly his plane in a way in which its track would be recorded as a graduation cap, with “2020” written beneath it.

“With the whole COVID-19 thing going on, people have been so amazing with the way they have been reaching out to the current graduates,” he said. “I wanted to have an extraordinary outreach to my son.”

In addition to flying a track to appear as a graduation cap and “2020,” Carl decided to add something extra special to his message.

“I thought I would make the last zero a heart,” he said. “I thought of making the point of the heart right over the Warrior Run High School.”

Using specialized software, called ForeFlight, Carl was able to plot the path of his flight so the point of the heart in the track would appear right over the school.

“The day we flew, it was windy down low, and quite bumpy,” Carl said. “We ended up climbing on top of the clouds.

“The eastern half (of the flight) was quite clear,” he said. “The western half, toward Jersey Shore, Mifflinburg, was overcast.”

Carl didn’t have a lot of time for sightseeing while in the sky.

“It took a lot of concentration to fly this route very specifically,” Carl said, adding that he enjoyed spending time with Keegan while in the sky.

He also noted that he initially didn’t tell the air traffic controllers at the Williamsport Regional Airport the reasoning behind his flight pattern. However, he was being closely watched by a controller.

“The tower said, ‘I’ve been watching you, it looks good,’” Carl recounted. “He knew what we were doing by the time I got (back to the airport)… A few other friends I told about what we were doing, and they watched it live (online) as well.”

“I’m a pilot, so I love this stuff,” he said. “If this brings a thought to our graduates that they’re special, then mission accomplished.”

Carl and his wife Nelia have two daughters who are also Penn State graduates. Their daughter Kristin Chisholm was a member of the Penn State Blue Band while attending the university. Their other daughter, Nichole Jenkins, is currently training to become a pilot in the United States Air Force.