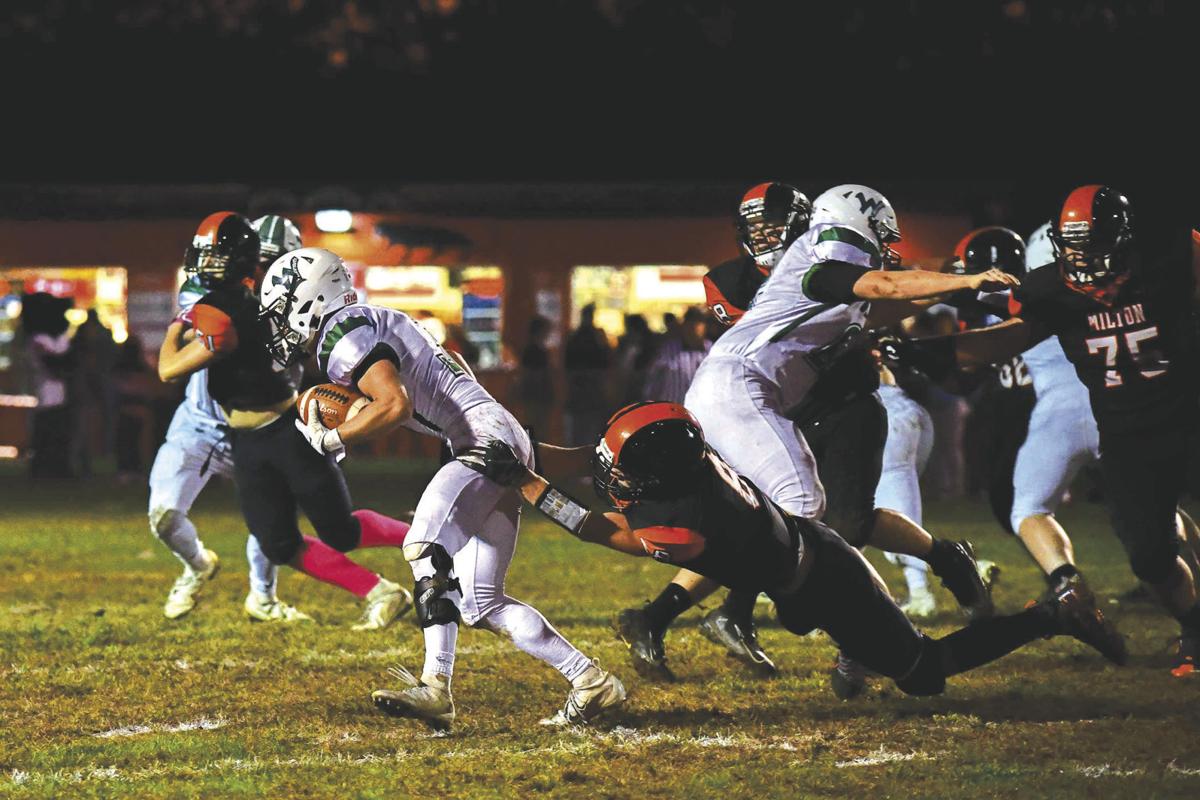 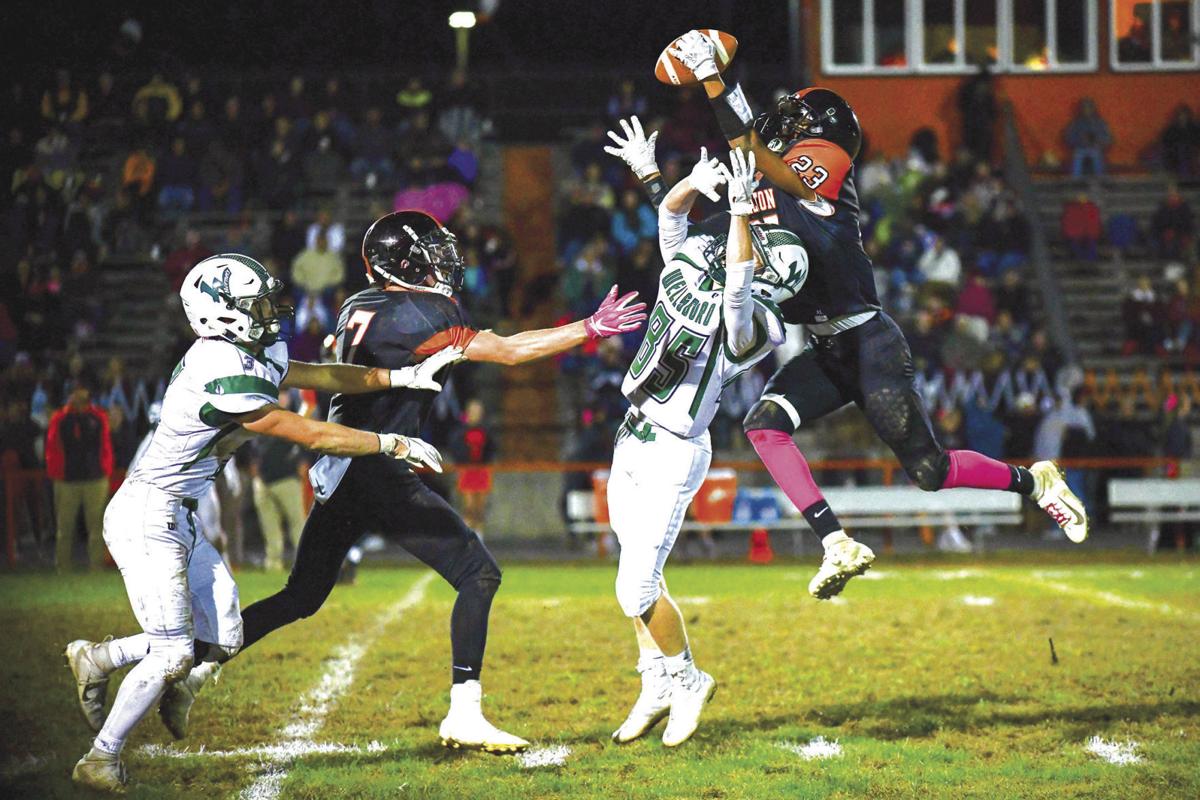 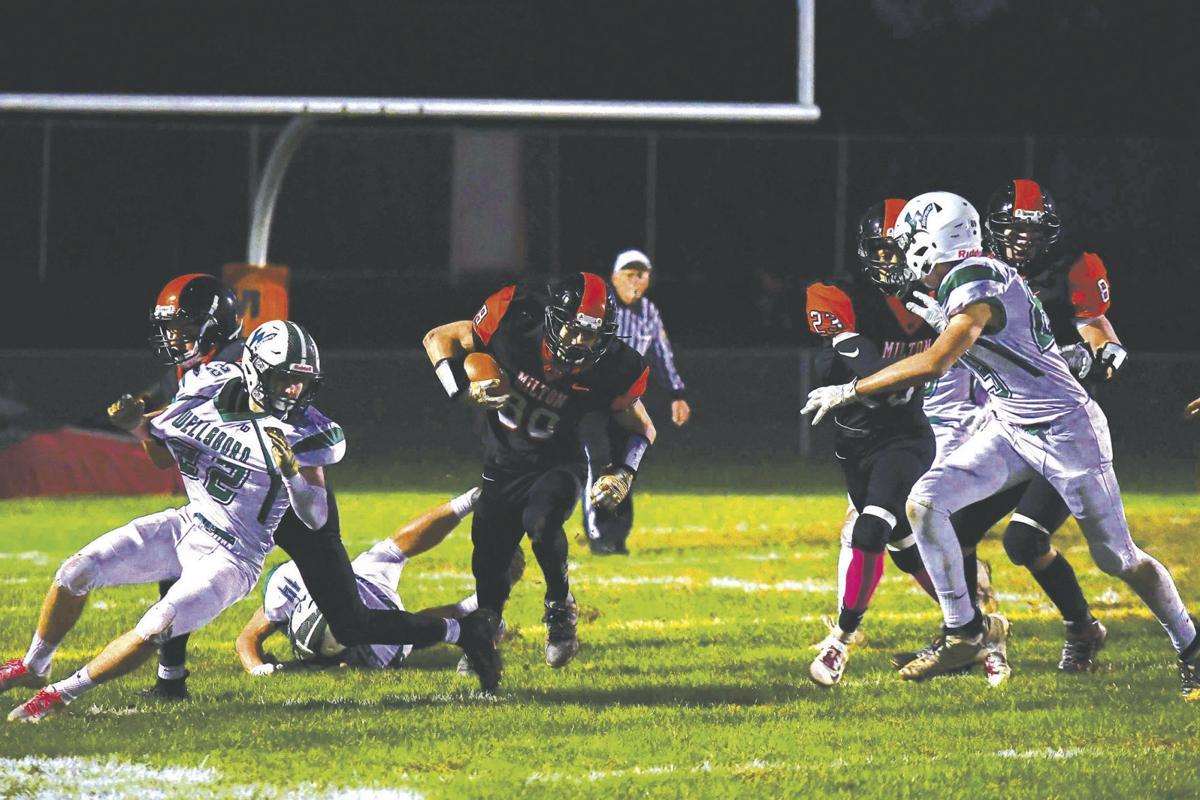 Milton’s Owen Keister bursts through a hole to get a positive gain during Friday’s home game against Wellsboro. 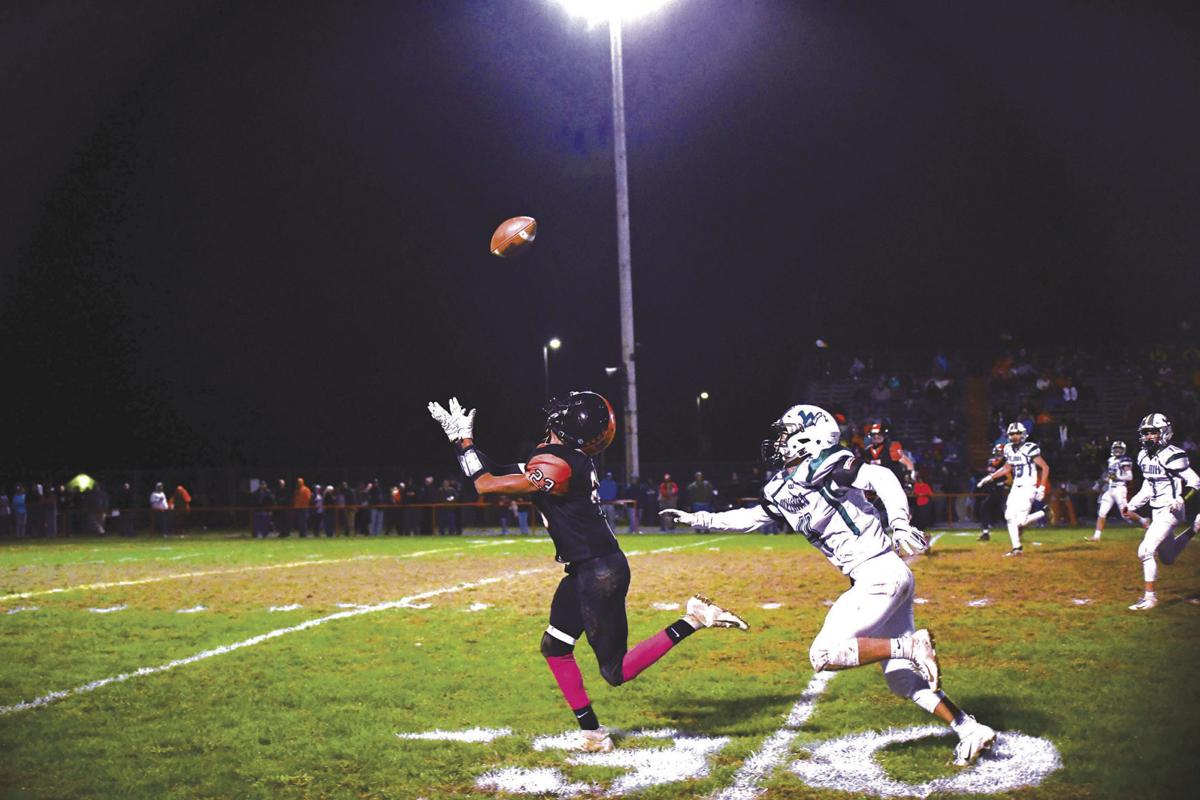 Milton's Kenley Caputo reaches out for a pass from Ethan Rowe during Friday's game against Wellsboro.

Milton’s Owen Keister bursts through a hole to get a positive gain during Friday’s home game against Wellsboro.

Milton's Kenley Caputo reaches out for a pass from Ethan Rowe during Friday's game against Wellsboro.

MILTON — Right from the opening kickoff against Wellsboro, the Milton Black Panthers were in trouble.

The Hornets won the coin toss but deferred to Milton, and Wellsboro was set to kick the ball away to start the game.

Wellsboro, out of the Northern Tier, squib-kicked the ball and then recovered the ensuing fumble when the Black Panthers couldn’t hold onto it.

The Hornets would score a touchdown on the turnover — one of four touchdowns they produced in the first quarter — to roll to a 47-7 nonleague victory over the Black Panthers on Homecoming Night at Alumni Field.

The fumbled kickoff return was one of four turnovers Milton (0-7) committed on the day, and losing the turnover battle was a big reason the Black Panthers fell to Wellsboro (6-1).

“Yeah, we turned the ball over way too much. It hurt us early and Wellsboro beat us in special teams tonight pretty good,” said Milton coach Phil Davis. “We (also) couldn’t get off the field on third down. We had Wellsboro in 3rd-and-long situations numerous times in the game, but we couldn’t make a play and we couldn’t just get off the field — and that kind of hurt us a lot too.”

The fumbled kickoff to start the game put Wellsboro at the Milton 36 yard line. Four plays later and the Hornets were in the endzone on a 12-yard pass from Isaac Keane to Logan Henry.

Wellsboro senior running back Aidan Hauser, who had 20 rushing touchdowns coming into the game, notched Nos. 21 and 22 on runs of 1 and 8 yards in the next two series to push the Hornets’ lead to 19-0.

Then with less than a minute remaining in the first quarter, Keane would throw a two-yard pass to Alex Burrell to increase that lead to 26-0.

In the second quarter it was more of the same for Wellsboro, and a lot more Hauser as well.

Hauser added two more touchdowns runs in the period by scoring from 16 and 9 yards out to make the Hornets’ lead 40-0 at the half.

Milton fumbled the ball away a total of three times in the first half, with the last two setting up Hauser’s scoring runs of 8 and 16 yards.

“Wellsboro played really well. They played physical and they were fast to the ball, and we turned the ball over just too much,” said Davis. “We just couldn’t get a rhythm going on offense at all. We put our defense in bad spots, and like I said we couldn’t get off the field on third downs.

“So, you put all of those things together and this is what happens,” added Milton’s coach.

Another big special teams play by Wellsboro resulted in an 88-yard kickoff return by Silas Wagaman to start the second half.

Following that play Milton finally got on the board thanks to some good field position provided by Tyler Boyer’s 31-yard kickoff return to the Wellsboro 45. Three plays later, including a 12-yard pass from Ethan Rowe to Xavier Minium, helped set up Rowe’s 25-yard touchdown pass to Kenley Caputo.

“Our game plan coming in was to be physical and aggressive, and I felt like we did know enough about Wellsboro but they just executed better than we did. They made the plays, and they have some really athletes on that team,” said Davis. “Even when we caused a fumble, Wellsboro picked it up and ran it for 25 yards. So, I mean things just didn’t go our way at all tonight — and we didn’t make them go our way — and we got a lot of work to do to fix that.

Next week Milton plays at Loyalsock in a HAC-II contest.