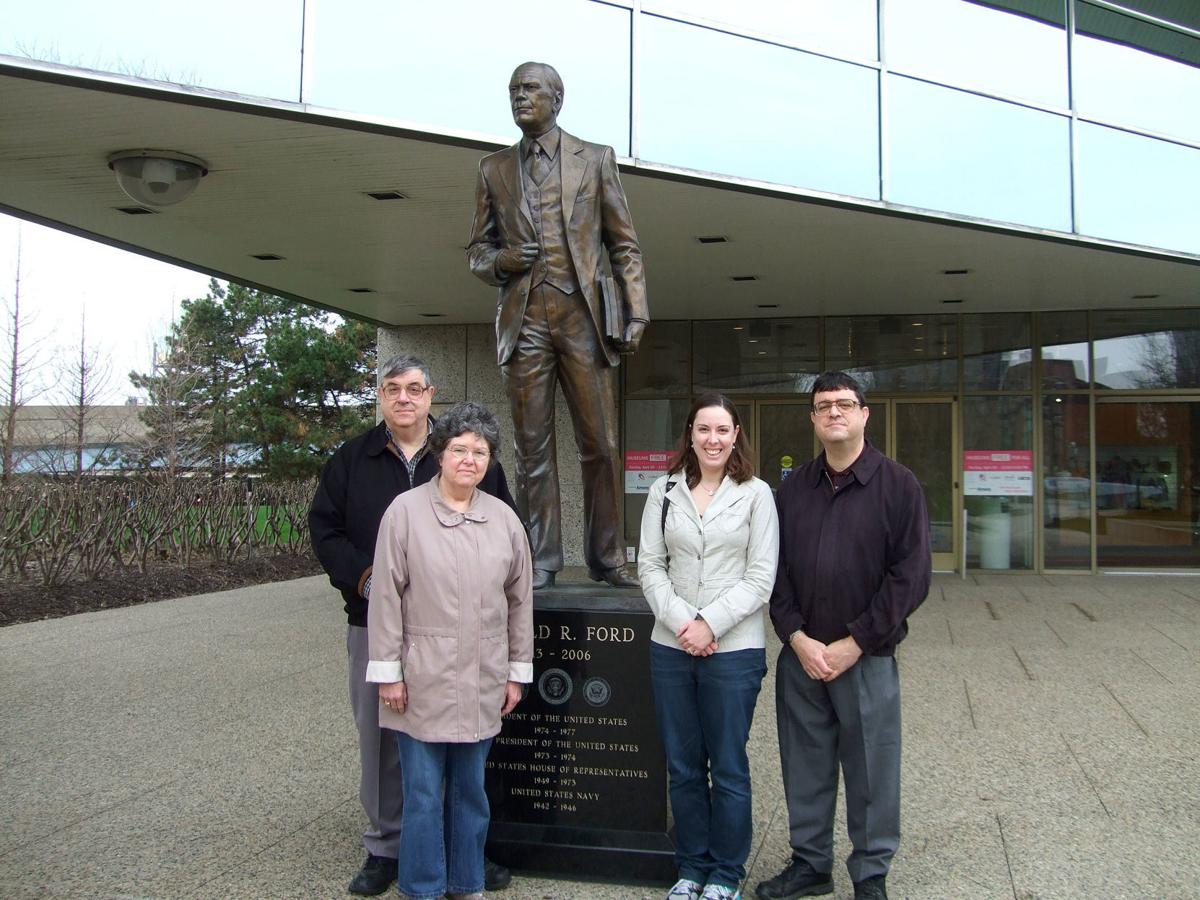 The Baldwin family has visited historic sites related to nearly every U.S. president. Standing in front of a statue of President Gerald Ford at his museum in Michigan are, from left E. Terry and Diane Baldwin, and their children Laura Yantz and James Baldwin. 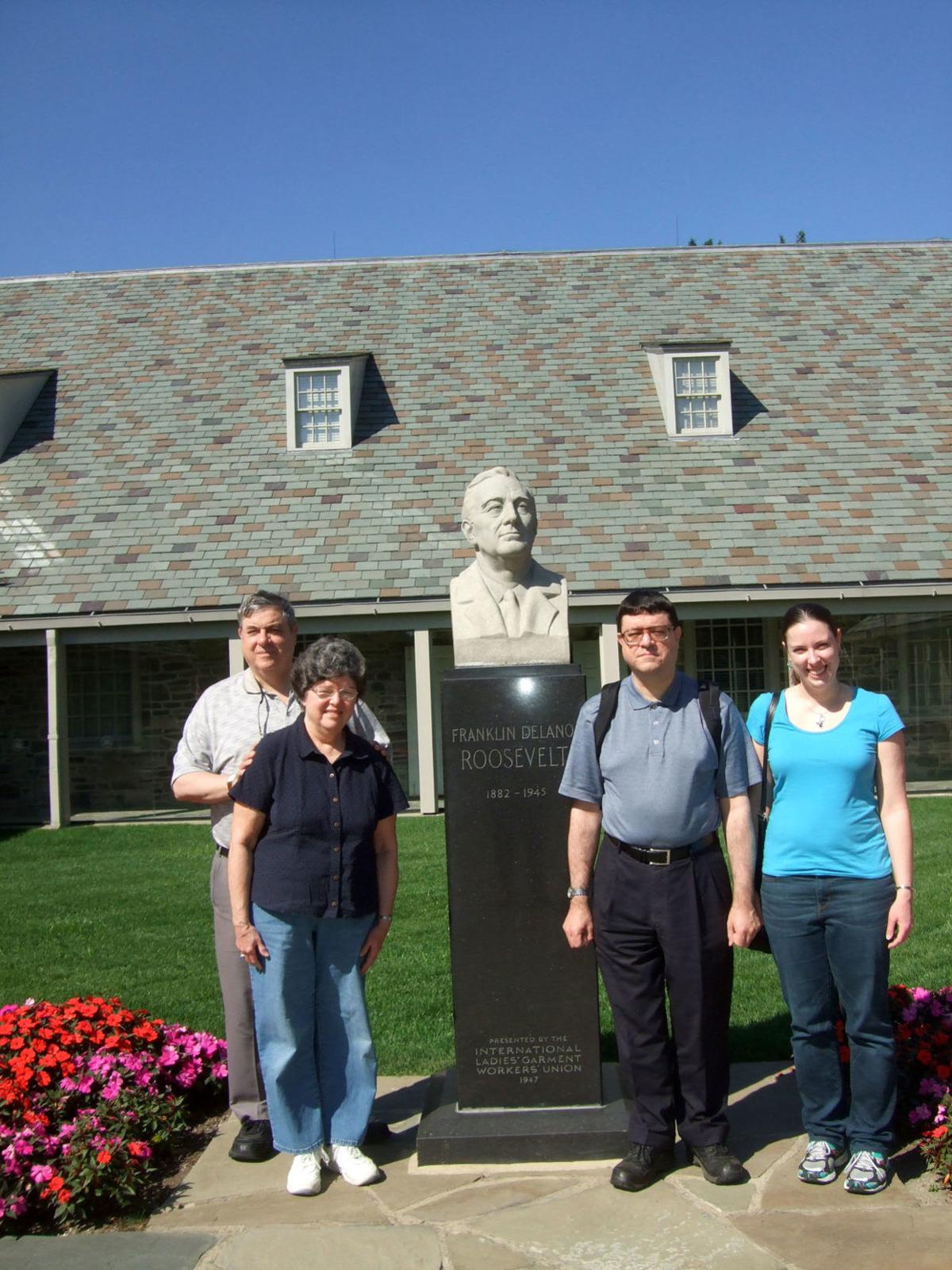 Presidential history is of interest to the Baldwin family. They’ve visited locations connected to nearly every U.S. president. Here, the family visited the Franklin D. Roosevelt Presidential Library and Museum in Hyde Park, N.Y. From left, E. Terry and Diane Baldwin, and their children James Baldwin and Laura Yantz.

The Baldwin family has visited historic sites related to nearly every U.S. president. Standing in front of a statue of President Gerald Ford at his museum in Michigan are, from left E. Terry and Diane Baldwin, and their children Laura Yantz and James Baldwin.

Presidential history is of interest to the Baldwin family. They’ve visited locations connected to nearly every U.S. president. Here, the family visited the Franklin D. Roosevelt Presidential Library and Museum in Hyde Park, N.Y. From left, E. Terry and Diane Baldwin, and their children James Baldwin and Laura Yantz.

MILTON — A Milton family has spent vacation time over the past four decades criss-crossing the country, visiting historic sites related to nearly every U.S. president.

“We started taking a family vacation in the summer when my sister and I were young, in 1985,” Attorney James Baldwin said.

“We would go to a city every summer,” he continued. “While on those trips, we visited (historic) sites.”

On some of their trips over the last two decades, James said the family has been joined by his sister Laura Yantz, who now lives in Virginia.

“For about the last 20 years, we have planned our trips based on picking a location that has a significant presidential site,” James said. “We’ve done at least one significant site for every president, that is through George W. Bush.”

The Baldwins have also visited the burial site of each deceased president, except Grover Cleveland and James Polk.

“For (George H.W.) Bush, we visited his burial site but he wasn’t buried there yet,” James said, noting that Bush died later.

The first library the family visited was the John F. Kennedy Presidential Library and Museum in Boston, Mass. They initially visited the site in 1994 and returned in 2018.

E. Terry noted that the National Archives operates each of the 13 presidential libraries.

The Baldwins noted that the libraries largely feature displays reflective of the presidents and their times in office.

Several of the libraries particularly impressed the Baldwins.

“The Reagan library, in Simi Valley, Calif., that was very impressive,” E. Terry said. “They retained the presidential plane, Air Force One. It has its own room. You can tour the plane, you can go in it.”

They were also impressed with Truman’s library.

“That was very extensive, very well done,” E. Terry said. “That one is closed right now for renovations. Within a mile is the home where he and his wife lived.”

That home is open for tours.

“It’s exactly the way it was when she died,” E. Terry continued. “His hats, his coats, everything is like it was when he died in ‘72.”

Of the numerous other historic sites they’ve visited, the Baldwins especially enjoyed Springfield, Ill., where the (Abraham) Lincoln National Historic Site is located.

“You can go to Oak Ridge Cemetery and see his tomb,” E. Terry said. “He’s (buried) under concrete and steel. His body was almost snatched several times.”

The Baldwins were able to visit the tombs of two presidents in Hollywood Cemetery, Richmond, Va. John Tyler and James Monroe are both buried there.

They’ve also visited the graves of John F. Kennedy and William Howard Taft, both in Arlington National Cemetery, in Virginia.

Of the four presidents who were assassinated — Abraham Lincoln, James Garfield, William McKinley and John F. Kennedy — the Baldwins have visited three of the four assassination sites.

They have not visited the Baltimore and Potomac Railroad Station in Washington, D.C., where Garfield was shot in 1881. He died in New Jersey.

The Baldwins have visited: Ford’s Theatre, where Lincoln was shot in 1865; Buffalo, N.Y., where McKinley was shot in 1901; and the Texas School Book Depository in Dallas, site of Kennedy’s assassination.

James said the area where McKinley was shot is historic for other reasons as well.

“The home he was taken to after he was shot, that’s the inaugural home for Theodore Roosevelt,” he noted.

By visiting so many historic locations, the Baldwins have developed an even greater appreciation of presidential history.

“The libraries and museums bring out the history of the period (of each president),” E. Terry said. “It enhanced my perspective of knowing the diverse history this country has.”

James was particularly interested to see just how small government was in the 1800s.

“For (Millard) Fillmore, the cabinet secretaries didn’t work in the summer,” he said. “He answered all of their correspondents.”

The Baldwins are looking forward to sites being developed to recognized recent presidents. E. Terry noted that the Barack Obama Presidential Center is planned to be built in Chicago, Ill.

“We’d love to see the Obama library when it gets done,” he said. “Trump will have something (one day).”